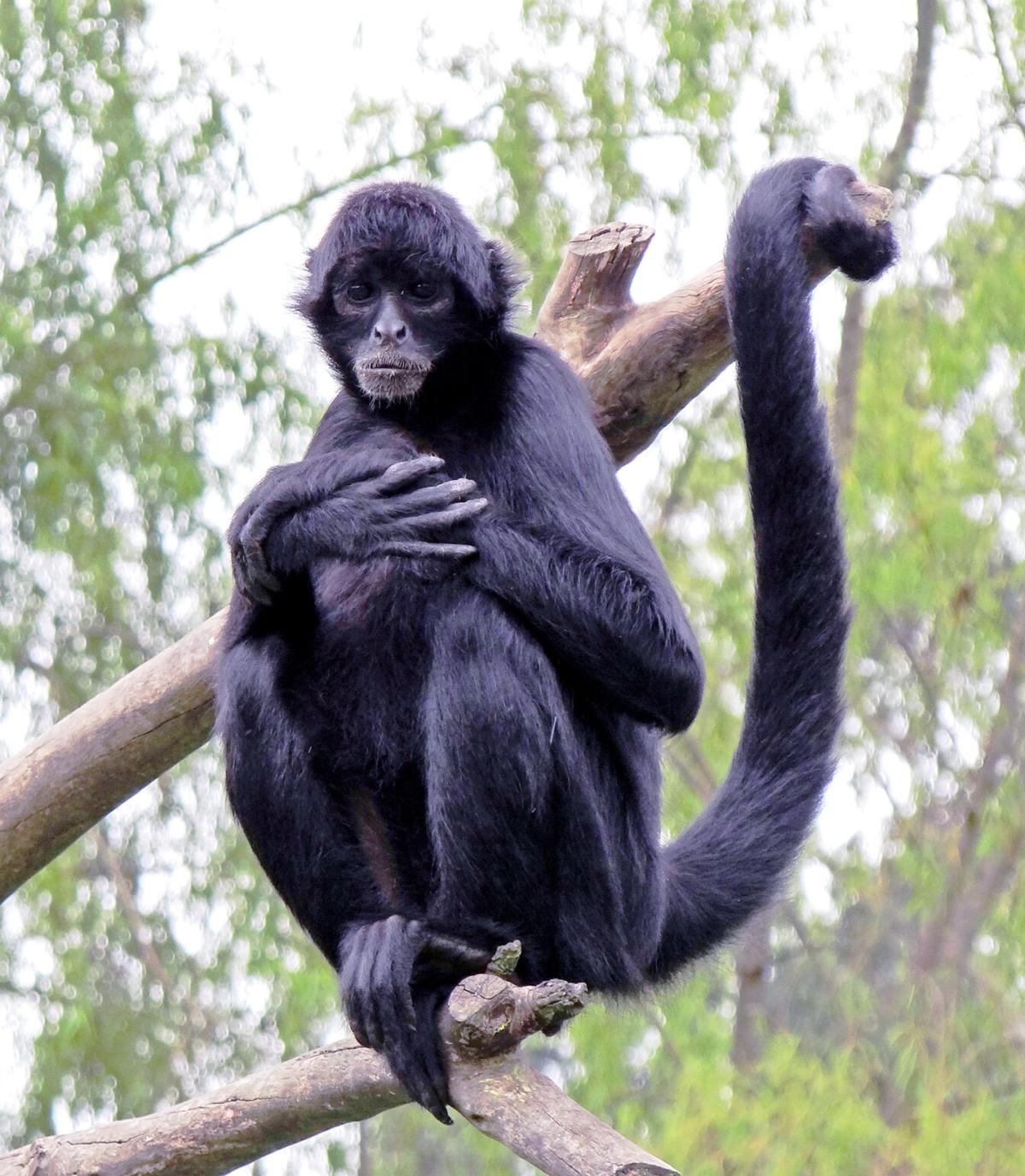 It turned out that a spider monkey wasn’t an ideal pet.

A Pacific County family bit off more than they could chew by buying a spider money at this Chehalis store. 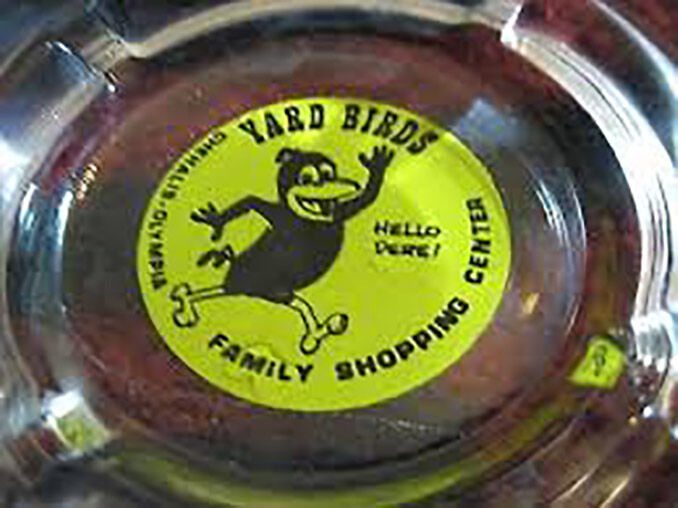 An ashtray is a reminder of Yard Birds, a store with an extensive pet department.

A small house at First and Washington in South Bend was home to unusual critters.

Living on our postage stamp-sized place on First and Washington in South Bend, my dad never let lack of space stop his fascination with and habit of acquiring unique pets. He subscribed to various outdoor magazines that pictured baby chicks or rabbits that could be mail ordered. They would arrive on the train that still came to Raymond in the late 1960s.

In anticipation of his latest purchase, Dad constructed a two-car garage just so he could provide for 50 baby pheasants. But shortly after getting them and bringing them to our house in town, we moved to the South Fork onto seven acres, so he and mom made a huge covered chicken house to protect them. As state rules would have it, raising pheasants in the state of Washington was not a legal activity, according to the kindly game warden, and mom and dad reluctantly relinquished a good portion of the pheasants to frolic in the woods. The rest, sadly, ended up on the dinner table. Mom said Dad had wanted a buffalo, but he never got around to getting one.

After the move to the country, we kids were able to assist with the care of many animals. When brother’s sow, Lucy, had piglets, we had a procession line. First one — catch the piglet as it was born; next, pass over to next to wipe the nose; next one clean the little one and wrap it in a towel. Lucy decided to have give birth to her piglets at night and we were up all night wide-eyed with fascination by the squirmy piggies. Through the years my dad frequented the Twin City auction and brought home many farm animals. The four of us children were each provided with a calf to raise. Mine, named Jack, was the only one to make it to adulthood. I loved the early mornings when it was still dark, and Dad would light the Coleman lantern. I fed Jack milk with a metal bucket. I doted on Jack and could occasionally be found napping along side of my Guernsey cow. Eventually, I had to say goodbye to Jack and my dad bought a horse for me with the proceeds.

To escape the monotony of the rain, sometimes on Saturday afternoons our family would take a drive to the nearest department store — “Yard Birds,” in Chehalis. It was 50 miles away and was the equivalent of today’s Target store except back then there was always a pet department. In an old welcome letter to the community the owners wrote:

“A huge Pet-Dept. is being planned. It is already built. We will carry horses, sheep, goats, geese etc. in quantity. We already carry many of these regularly now. We have a free dog exchange. We give away at least 2,000 puppies a year. There has hardly ever been a time that we were out of stock on free dogs. Monkeys and other animals, talking birds etc. are carried for atmosphere. Store is about 100,000 sq. ft. We hope you enjoy your stay with us and come again.”

There were no malls or shopping centers in our area, so Yard Birds was an all-day event that we looked forward to. Laurie and I rode in the back of the truck in the open with our backs pressed against the cab. When we arrived at Yard Birds we separated and wound through aisles browsing different sections at our leisure. We had the whole rainy day.

It just so happens that one of us ended up at the pet section in the back of the store, where there was a big steel cage with a spider monkey inside and a sign saying, “Angel, 50 dollars. No returns.” It was too good to be true! When Dad saw the monkey he was ecstatic and asked the store clerk about the ins and outs of caring for a monkey. The clerk said, “Oh, he’s a great little fella — watch this!” He took Angel out and sat him on his shoulder and Angel wrapped his skinny long hairy fingers lovingly around his hand. Dad was very intrigued and impressed by the tricks the clerk showed him. “We’ll take him!” he said. Laurie and I were over the moon yet fearful of this long-legged skinny monkey with big round eyes. But we envisioned that soon we would be baking cookies in our Easy Bake oven together. I mean, Fred and Wilma Flintstone did have Dino, their baby dinosaur. It seemed logical.

Recently, I asked mom how in the world our family ended up with a spider monkey. Did we always want one? Had we been begging to get a monkey for a playmate? What was a spider monkey? Mom was deadpan as she said that Dad saw one in one of his magazines and it was dressed in a little apron. That, I thought, was hilarious. They thought it would make a good pet for the kids. You know, part of the family. Maybe take turns at chores like washing dishes. Talking to mom, I envision a little stool to stand on in front of the sink as our aproned monkey peels potatoes. Certainly, no one we knew ever had a spider monkey as a pet. I’m sure we were hopeful that a monkey would be our new best friend. The idea certainly would not be out of the question or extraordinary, which in itself shows that our family was a bit unorthodox. It wouldn’t be surprising to us certainly — no more than getting a cat. Life wasn’t easy during those years, but it sure wasn’t boring.

Dad carried Angel to our truck in a box with a hole in the top and shoved it against the back of the bed of the truck as Laurie and I nervously rode home on either side of Angel. After a while, as we drove, we got curious and started to cautiously drop potato chips into the hole for Angel and he ate them. But when we stopped the supply of chips, he suddenly stuck his long hairy arm out to snatch another one and we were terrified of this screeching furry creature. We huddled suspiciously side by side in the far corner of the truck bed until we got home, so afraid were we that the stringy creature would get out of the box and attack us.

The plan was to keep Angel in Mom and Dad’s upholstery shop until he was “part of the family.” But first Dad had to take Angel to The Inn a block away and show his buddy. As Dad opened the box slightly, Angel burst through and sprung away from Dad and scurried out of the truck and straight to the top of a 150-foot poplar tree where he decided to stubbornly remain. Within a half an hour, half the neighborhood was standing below the tree craning their necks to see what would happen next. Across from our house, Dixie Smith came out of her house by Forrie’s Bluetop and yelled over to mom, “Hey Bernie, I heard you have a monkey! Where is it?” Mom pointed to the top of the tree. Dixie rolled with her infectious laughter, somehow not surprised, as by now we had been neighbors with the Smiths for years. This wasn’t their first rodeo.

As Dad was stewing about how to retrieve a monkey at the top of such a tall tree, he decided to have a cold beer at the Chester — what a surprise — while he pondered how to secure our new family addition. Fortunately, listening to Dad telling his story was a local tree topper who suggested a tactic to deploy. He would climb the tree himself and retrieve Angel. It was just that simple. He arrived to our house sporting a harness, lanyard and spiked boots. A big crowd of neighborhood kids and parents gathered to watch the topper begin his climb to rescue Angel at the tip of the thin poplar. He slowly ascended the tree and was about half way up when the Angel quickly limbed himself down to the bottom, swinging with the ease of — well, a monkey. Off Angel ran over toward the Remington house with half the town in pursuit.

With Angel eventually back in our care, he was secured inside the upholstery shop. Immediately, he swung from his tail and arms flying out of control bouncing around the shop like a slinky. “Let’s let him alone for a while and see if he calms down,” Dad said, and Laurie and I gladly complied. When Dad entered the shop eagerly the next morning, he was greeted by a shrill screeching wide-eyed monkey who had peed and pooped on nearly everything in the shop and he still was not even remotely calm or approachable. When Dad got near, Angel bared his small teeth and eeked loudly reaching out to scratch him. Dad’s patience had worn thin and he grew more frustrated as he tried to calm Angel. When he had had enough he finally resorted to profanity and a request to “Come to poppa!” true to his comic form. I won’t repeat the other expletives used. Rather than release him to reek more havoc, he was put back in his cage.

Within a few days Dad had given our new playmate to his buddy, Jess Young. It was a better fit and they seemed more equipped to handle a spider monkey’s personality and energy. The love fest was not for long, however, and Angel ended up with another family in Baleville. That’s the last we heard of our spider monkey until — it was a rainy day and our family was headed for an all-day shopping spree at Yard Birds. Wandering through the store and to the pet department, to our surprise there sat Angel again with a sign reading “Angel, 50 dollars. No returns.”