My Uncle Fritz at 18 (Frederick), drafted and killed in World War II. 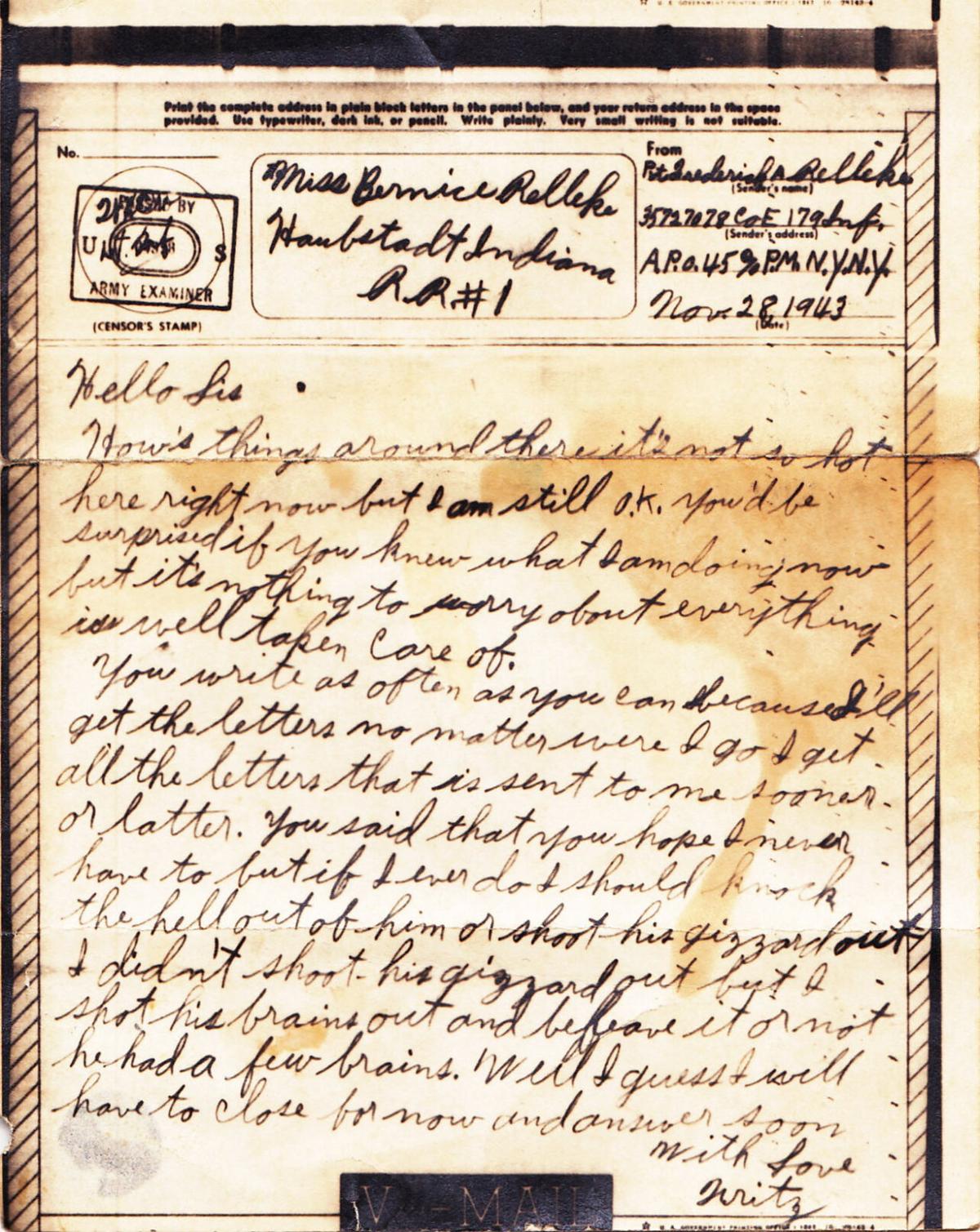 A letter my Uncle Fritz send my mom just before he was killed.

The Relleke children on their farm in Haubstadt Indiana in the 1930s. My mom, Bernice, is the youngest on the right.

I’m old enough to remember life with no computers, cell phones or microwaves. I remember wearing only dresses to school until 5th grade. I can’t remember what I had for dinner yesterday, but I remember vividly the yellow floral pants mom made for me to wear that first year. My mom is 91. Her memory is sketchy at times, but she retells having a phone for the first time in her childhood home. She said there was so much static that her mom would have to shout repeatedly into the phone when she called her sister, Maggie. Maggie?? Gertie?? Maggie?? Gertie?? Hello?? She probably would have been better off to lean out the door and yell to her. My grandfather threatened to stop the phone service when they raised his bill to $8 a year.

Imagine recalling 85 years ago. Mom was born in 1929, the year of the stock market crash and the beginning of the Great Depression. She was also, unfortunately, born before penicillin was invented. Her parents cried as they were given the chance of 1 in 1000 that she would survive pneumonia at age six with a temperature of 107 degrees. She lived, but she had to relearn to walk and carries the marring scars from the drainage tubes inserted into each side of her rib-cage. For her whole life she chose a one-piece bathing suit for that reason, long after the two-piece was fashionable. Having no savings account on their Indiana farm, my grandfather sold his team of mules, a cow and six pigs to pay the $300 bill to the hospital that saved his daughter. Mom spent six weeks in the hospital. It was the first time she had ever eaten bought bacon rather than the 1/3-inch thick fatty bacon from butchered pigs on the farm, as was the German custom. Mom recalls that during her second surgery she was not given enough chloroform and had to be held down as they cut into her. My grandparents were so thrilled to have their youngest daughter alive and home that they told her she could have anything she wanted to eat. She asked for store-bought bacon. Mom’s brother Ed made her a walking stick.

My grandparents would be mortified if they lived to see the way people dress for plane trips today. When mom was 19 she flew for the first time to Texas. It was proper at that time to buy a new dress, shoes, hat and white gloves for the trip.

Mom recalls the family weekly Saturday bath. With no indoor plumbing or electricity, the six kids were bathed in a tub in the shady corner of the outside of the house. Mom was the youngest, so she got the first dip. I assume that by the time my grandparents hit the water it was quite murky. “Don’t throw the baby out with the bathwater” comes to mind. With no electricity, the two youngest children, Mom and Cotton, read their school books by light of an oil lamp. Rather than gathering around a TV, all members eked out a comfortable place in the living room and listened to a battery-operated radio for a few hours after dinner before an early bedtime. Work started at sun-up on the farm. On WLS Chicago and WGBF Evansville, they listened to sitcoms like “Lum and Abner,” two brothers whose comedy show took place in their country store. They answered the phone “Lum and Abner’s Jot ‘em Down Store!” Fibber McGee and Molly were another common comedy team.

My grandparents would be mortified if they lived to see the way people dress for plane trips today. When mom was 19 she flew for the first time to Texas. It was proper at that time to buy a new dress, shoes, hat and white gloves for the trip. It was a big deal and commercial flights were not common. So risky was flying that most people bought life insurance at a kiosk at the airport before the flight. As flights got more uncomfortable and crammed, people changed to a focus on comfort. Just roll out of bed in pajamas and climb aboard packing a pillow.

Off to the war

The war brought many changes to life on the farm. Three of mom’s brothers were drafted into World War II. My Uncle Fritz got a letter on his 18th birthday stating he needed to sign up for the draft. He was given a farewell party and the family gathered around to sing “Till We Meet Again.” Fritz, whose grandparents had immigrated from Germany, was now going to war to kill Germans. The family stopped speaking German at home as the war progressed. Fritz didn’t want to go to war and leave his girlfriend. He was killed a year later in Pozzilli, Italy. My Uncle Wes was drafted with two children at home. Uncle Cotton joined the Navy so as not to get drafted into the Army. Uncle Ray was drafted with two children at home. This left my grandfather with no one to help him run the farm.

Uncle Ed was the only man in the family not to go to war. He was drafted but came down with polio. Since Jonas Salk didn’t invent a vaccination for polio until 1955, the community lived in dreaded fear that their children would get this crippling and deadly disease. Ed survived polio but was left with a weak leg and a limp for the rest of his life. My grandfather wondered why all of his boys were drafted while the neighboring rich farmer had none of his sons drafted. I think we would be hard pressed in today’s world to fork over our children for a draft. Then everyone was in the same boat. Everyone knew neighbors whose children were sacrificed for the war just as readily as sheet metal for boats.

Fritz was buried in a shroud about a year after his death, in R Fratelle Cemetery, Plot B, Row 2, Grave 15 — so say the Italian documents. An ID tag had been found on his remains. His date of death is listed as one year from the time of his enlistment, and it was found that he had been shot in the leg. After the war, he was sent home to be buried at St. James Catholic Church Cemetery in Haubstadt, Indiana, as were the items on his person at the time of his death — a wallet, Social Security card, two cloth insignias, photos, an address book, and his ID tag. His personal possessions sent home were his rosary, prayer book, shaving kit, razor, and a sewing kit. Private Frederick A. Relleke was finally laid to rest on July 14th, 1948 at St. James.

How’s things around there, it is not so hot here right now, but I am still o.k. You’d be surprised if you know what I am doing now, but it is nothing to worry about. Everything is well taken care of. You write as often as you can because I’ll get the letters no matter where I go. I get all the letters that are sent to me sooner or later.

Well, I guess I will have to close for now and answer soon.

Before the advent of permanent press, cotton articles of clothing all had to be ironed. With no electricity, my grandmother used her wood stove in the kitchen to heat two or three irons. She inserted a handle into one, used it until it wasn’t hot anymore, and changed out the handles repeatedly. At six or seven, my mom was charged with ironing handkerchiefs and pillow cases.

Canning was done in the hottest part of the summer, but there was no air conditioning and the wood stove again was utilized for heating up the canner. Everything was canned and homemade, even catsup, though the first tomatoes of the summer were off limits as they could be sold for 10 cents a pound.

My grandmother had a garden truck with open sides and big windows that she packed full of garden vegetables and peddled on main street. And refrigeration? Forget about it. Every four or five days, the iceman came to deliver 50-pound chucks of ice for the wooden “ice box.”

Change arrives, ready or not

I have a tough time accepting change. When cell phones first came out, I was probably the only dinosaur remaining, unable to part with my landline until I was humiliated into joining the ranks of cell phone users. Now it is a necessity. We don’t have landlines anymore. So focused are we on our cell phones that we walk into traffic or off a curb as we surf the net. Even creepier is seeing everyone with cordless earbuds walking around talking as if to a ghost, the phone concealed in a pocket or purse.

As a child, our family had a phone attached to the wall and we were not allowed to talk for long periods of time because we were on a party line. So, we would have different rings from our “party” (neighbors). Maybe we would get two short rings. If you were sly enough you could eavesdrop on Mary Hodel or Elmer Kero down the South Fork Road. We all knew how to gently lift the phone off the hook and slowly let up on it with our fingertips. We would listen to conversations and make up stories and imagined affairs. The cord wasn’t very long so you had to sit at the kitchen table to talk.

Later when I lived alone in the city I had a new Princess phone that you could move to different locations to plug into, but still a cord was attached. It was during this time that I could have used unlimited minutes. Calls home were paid for by their length. I always had to hurry and talk so I wouldn’t run up a big bill. Also, there was no answering service, so if you weren’t home you just missed all calls. And of course, no international services, Zoom, or Skype — what? No email? It was just the old fashioned sitting down and writing a letter by hand. I loved that and miss it.

And so, we nostalgically reminisce about the good ole days, but given the option, few would want to revert to old customs. It was a hard life. I wonder sometimes if life is, however, more stressful with the advent of the computer age, cell phones, and television. It certainly can seem like a bit of a rat race at times, right?