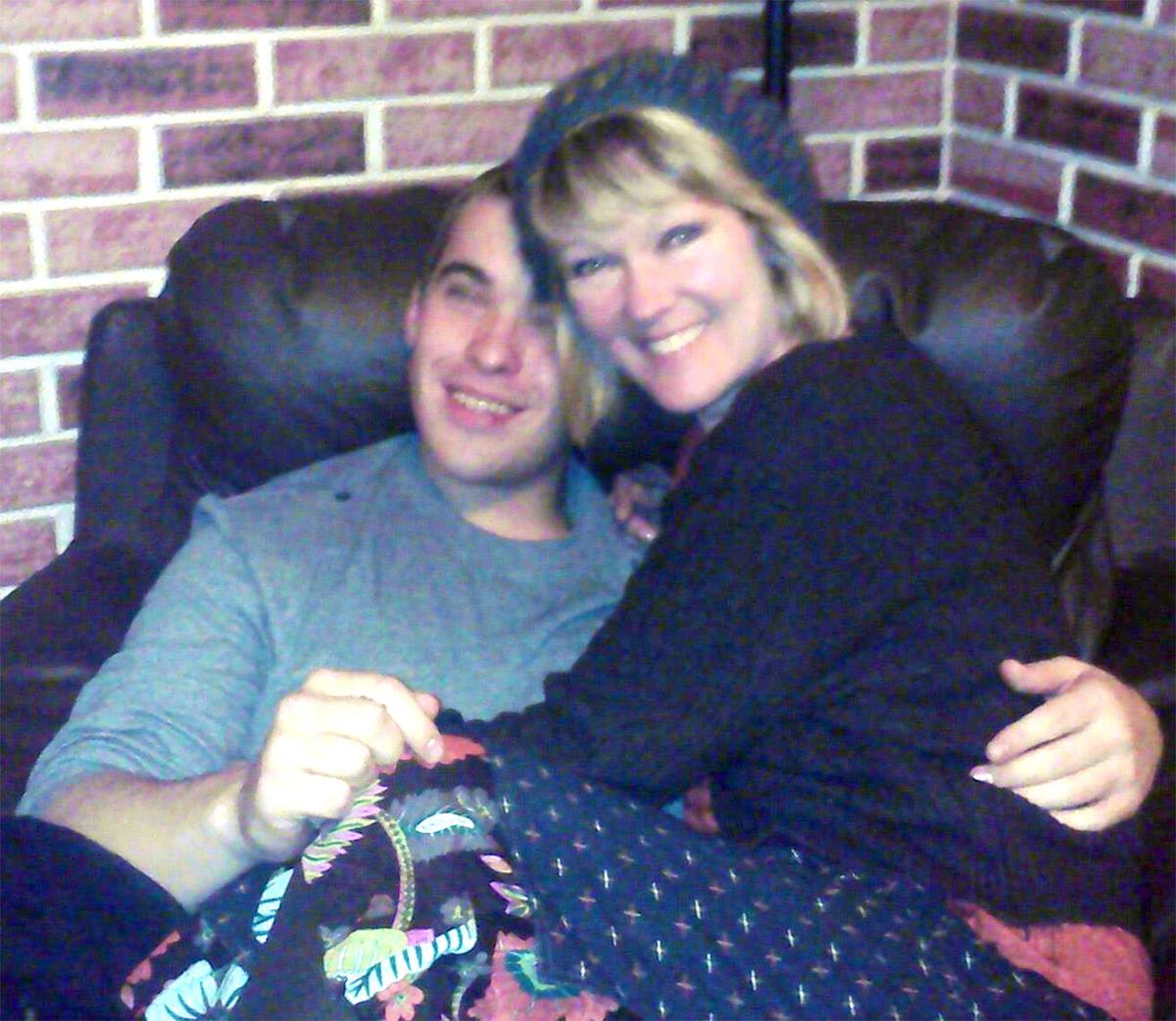 Leisa Jennings and her son Solomon spent a last Christmas together in Portland in 2011. 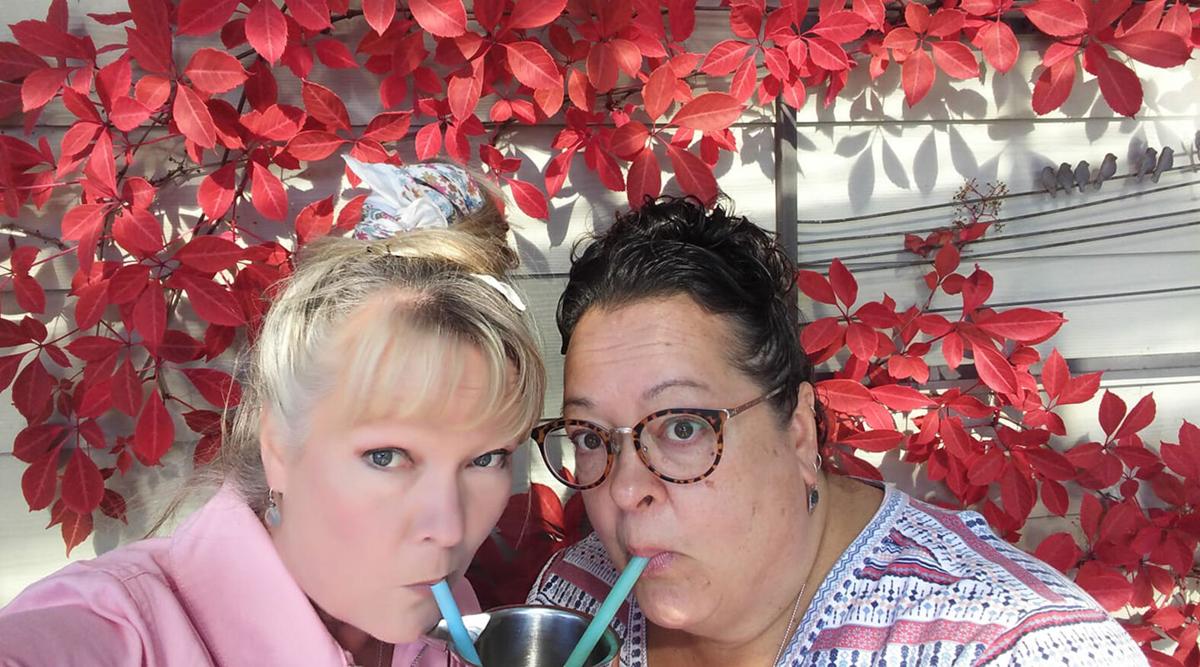 Leisa and her lifelong friend Carolyn Allee share a milkshake. 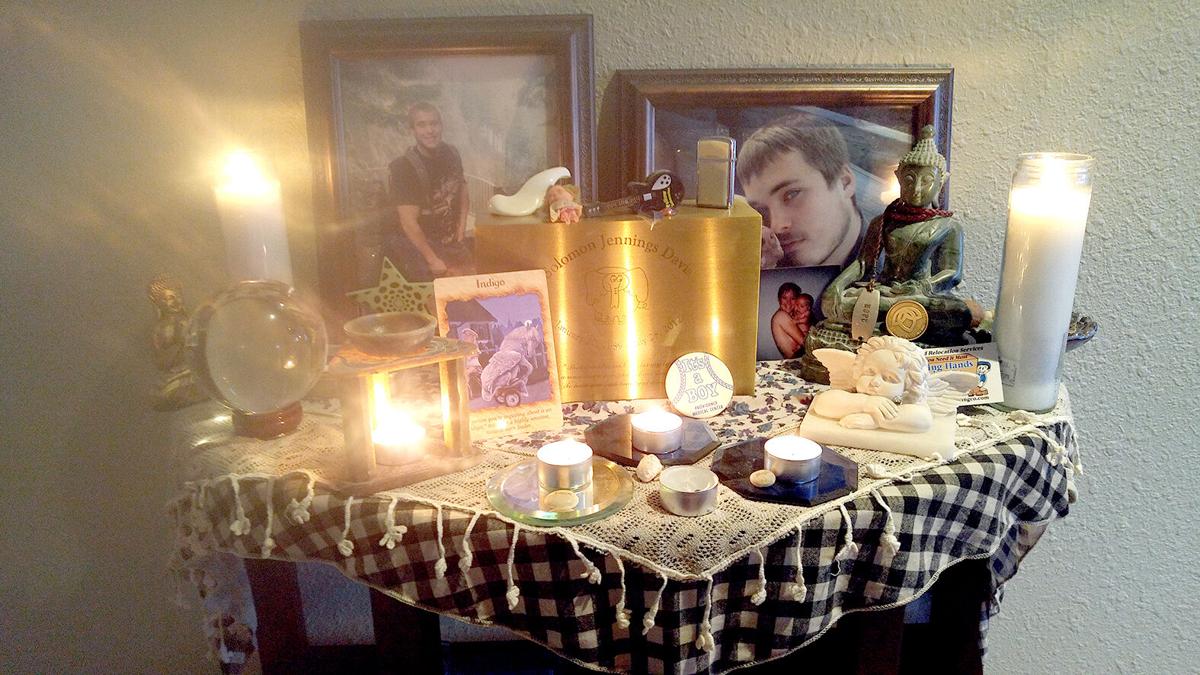 A shrine celebrates Solomon’s life on his birthday. 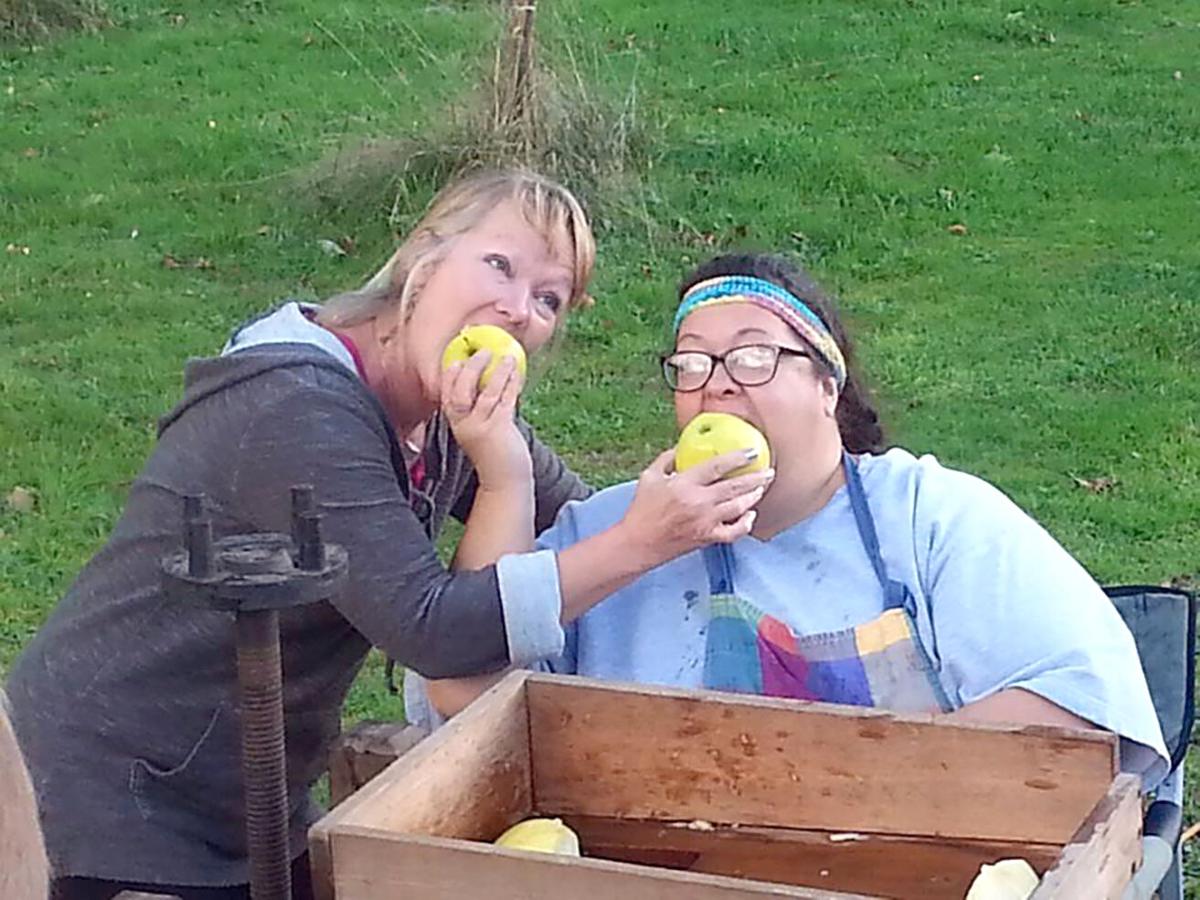 Those schoolgirl days of telling tales

And biting nails are gone

But in my mind I know

They still will live on and on

But how do you thank someone

Who has taken you from crayons to perfume?

It isn’t easy, but I’ll try

The time has come for closing books

And long last looks must end

And as I leave I know

That I am leaving my best friend

A friend who taught me right from wrong

And weak from strong

That’s a lot to learn, what

What can I give you in return

I met a skinny bespeckled little girl when I was 9 and she was 7. This is how Carolyn Pehl (Allee) became my lifeline when I was 53 and she was 51. I wish everyone could have that one lifelong friend that is always there for them — the one that you eventually return to if you happen turn into a bowl of pudding.

Few people lived on the South Fork when we moved there when I was in 5th grade. We were delighted to find that only a half mile down the road on a big farm lived the Pehl family with five children. The older three were much older than us so we never became close, but they had a boy that would be in my class and a girl two years younger. Our families became intertwined through the years. My sister married into the Pehl family had four children who had the luxury of having both grandparents living within a half mile of each other. Mom and Bunny and Walt Pehl were mutual grandparents, and later they even lost one of these grandchildren together, my nephew Tanner.

Many changes have come to the South Fork since we moved there. We couldn’t ride bikes when I lived there because of the crude gravel road that was paved long after I was gone. We rode horses instead, sometimes going all the way to South Bend and as far as Menlo. Down the road from the farmhouse was Elmer and Anna Kero — a sweet couple — Anna worked at Weyerhaeuser — and down from Kero’s was the Hodel dairy farm where we got our milk. Mom drove us up the long dirt lane to the barn with our glass gallon jar, sometimes switching seats and letting my sister and I take turns driving at the beginning of the lane. Inside was a massive stainless steel tank with an opening on top. We used a metal dipper to fill up our gallon, taking sips along the way, and leaving two quarters on the table. At home, the delicious cream accumulated on the top few inches of the jar. Darigold trucks would come bumping up the 1/2-mile skinny lane and pick up the milk for distribution. In the other direction from our house was another small house where an older couple lived. That was it for four miles until the golf course; just a winding pitch-dark gravel road with a looming canopy of trees on either side that we sometimes mistook for spooky monsters.

There was a white farmhouse shared by two families from Seattle that would come in the summer. My sister and I were charged with counting their cows each night for 50 cents, as the cows could wander the whole property, which must have been 20 acres or more. They kept two horses on their property that we were allowed to ride. Major the Morgan quarter-horse had a massive thick neck and the power of a locomotive. Moving steady and with determination, Major liked to head straight to the tree line to throw us off his back. He had a hackamore bridle which did not have a bit, so he was his own ‘man.’ He called the shots and decided when he wanted to stop or how fast we’d go, sometimes losing us with his 90-degree turn into our driveway at full speed. My black horse and Major liked to race and when they chose to, we could not stop them. We just held onto their bare backs and put our lives in their capable hooves, tightly gripping their manes and the useless reins. The other horse was a beautiful calm pinto named Thunder. We had keys to the farmhouse and took care of their horses for the winter. When they came to visit their summer home, they were like celebrities to us — city folk. Between their two horses, my horse, and Gypsy, Kathy Pehl’s horse, we were never short of horses to ride when friends came to visit, though my gentle horse, Clyde, never had a saddle and I preferred it that way. Clyde could be seen running loose on lazy afternoons munching on clover.

We spent most of our time in the South Fork River, tubing and floating on inner tubes from the Pehl bridge to our house or swimming in my mom’s deep swim hole behind her house. A ledge came out with a foot or two of water and we could jump from it into the clean freezing cold water. It took our breath away with its coldness and turned our limbs a bruised shade of blue, but we were in and out all summer, barely dry before dipping back in the water and diving for rocks. We listened to Melanie and Bread. One winter, the four of us built an igloo in my mom’s yard when we had a deep fluffy snowfall, something that doesn’t seem to occur anymore.

I never lost touch with my friend, Carolyn, but the city was calling. I left with no intention of ever returning. We would go years without contacting each other, but when we did we got right back in the saddle like time had nothing on us. She had five kids and I had two. I lived north of Seattle, leaving at age 17, and she remained in the Pacific Northwest, later building a house on her parents’ property.

I was living in Portland with my 23-year-old son, Solomon. My husband, Brian, was a contractor in Afghanistan, so it was just the two of us. Since my best friend still lived just down from my mom on the South Fork, I drove to spend a weekend. I was sleeping in her daughter Jenna’s, room upstairs when I got repeated phone calls starting about 2 a.m. I finally answered and learned that my son was missing. I was concerned but figured I would get a phone call saying, oh … he was at so and so’s house or fell asleep. I woke Carolyn sleeping in the other room and she immediately told me to get in my car — she would drive, and we needed to go find him. I was still not hugely alarmed, but as we got closer to Portland with no word, I was hit with a state of panic and called the sheriff to report him missing. We had no idea where he was when he went missing but were told that he and his friend were visiting someone on Parrot Mountain in Sherwood, Oregon. We got an address and put it in the navigation. By now I was in full-on shaking panic mode. We arrived at the house and I began calling everyone I knew, desperate for help to search the mountain. What if he needed help? I had heard of people overturning a car and being found alive days after. I felt in my heart that time was of the essence. Support poured in as I rode in our pathfinder with Carolyn and had her let me out at various places so I could climb into ravines and yell for my son.

By now my phone is going dead but continues to ring constantly. I scream to callers that I can’t talk because I have to preserve my phone battery in case my son calls. I still have the blue tennis shoes I was wearing for the search, panicked and tripping and falling through ravines calling his name. The shoes still sit on my shoe rack. I can neither wear them nor throw them away. The sheriff finally called us back to the house. My heart lurched as I saw the chaplain. We were told matter of factly that a car was found overturned in a small amount of water and there were two deceased bodies in it. I’ll never forget that word — deceased, and the sudden urge to faint. My world stood still as I dropped to the grass in horror, still in disbelief.

I don’t remember leaving Portland that next day or blindly grabbing the few bits and bobs that only pure instinct told me to bring, mechanically putting my toothbrush in an overnight bag. I don’t know how I arrived at Carolyn’s or even why. I only knew that I came to her in liquid form like melted glass hardening in a heap.

I don’t remember leaving Portland that next day or blindly grabbing the few bits and bobs that only pure instinct told me to bring, mechanically putting my toothbrush in an overnight bag. I don’t know how I arrived at Carolyn’s or even why. I only knew that I came to her in liquid form like melted glass hardening in a heap. I never went back to the house we lived in. Good friends and Brian packed our belongings. Solomon’s best friend, Jordan, packed specific things I asked for — his longboard … his coat … his pillow. I gave Jordan his longboard.

I know I wouldn’t have survived the loss without the love and comfort that was given generously to me by Carolyn. I arrived at her door shattered into a million pieces and ready to sink deeply into a cloud of feathers. The two words that make me want to hurl my cornflakes to this day — refrigeration and deceased — words so unsympathetically listed on my bill from the mortuary. The main thing I felt at Carolyn’s home was that I was free to grieve there. There was no elephant in the room. It was raw and painful. No need to pretend. I vaguely remember being holed up in her daughter’s room crying with my daughter, and Carolyn would send her husband, David, to gently knock on our door and bring vegan muffins to our room. She had to lead me around as if I were a lost child, reminding me of daily functions like eating or getting dressed. How does one comfort a bowl of pudding?

Carolyn saved my life. I wouldn’t have survived the tragedy without the security of this person in my corner. If anyone could write a book on “How to Comfort a Bowl of Pudding,” it is Carolyn Allee. She was Mother Hubbard, and I wanted to be in her cupboard forever.