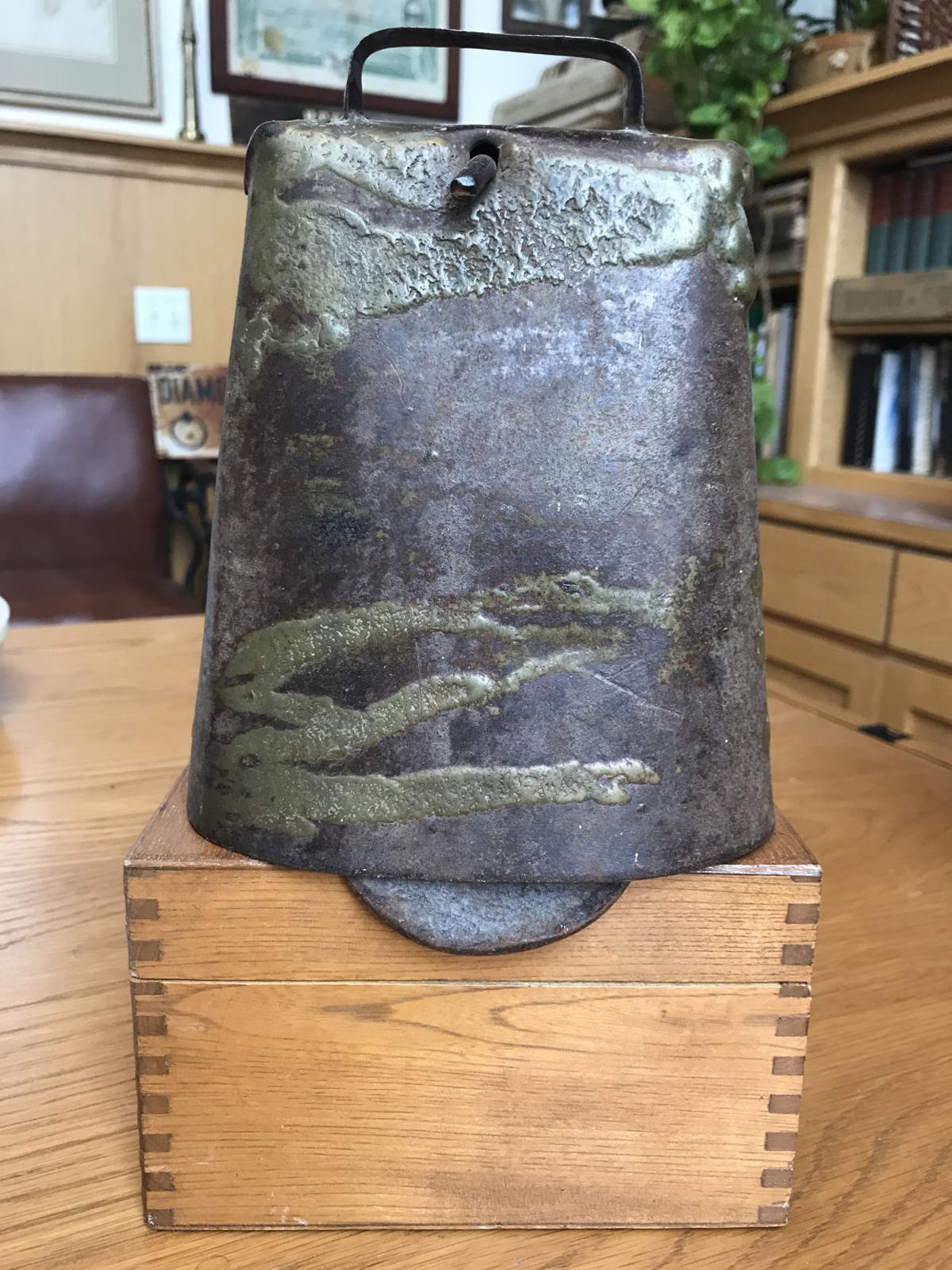 An iron bull bell brazed with a copper alloy harkens back to ancient times in the Anglo-Saxon kingdom of Northumbria in what is now Northeast England. Beyond pragmatic farmyard functions, such bells are thought to have religious significance, an ancestral relationship to the bronze church bells of a thousand years later. 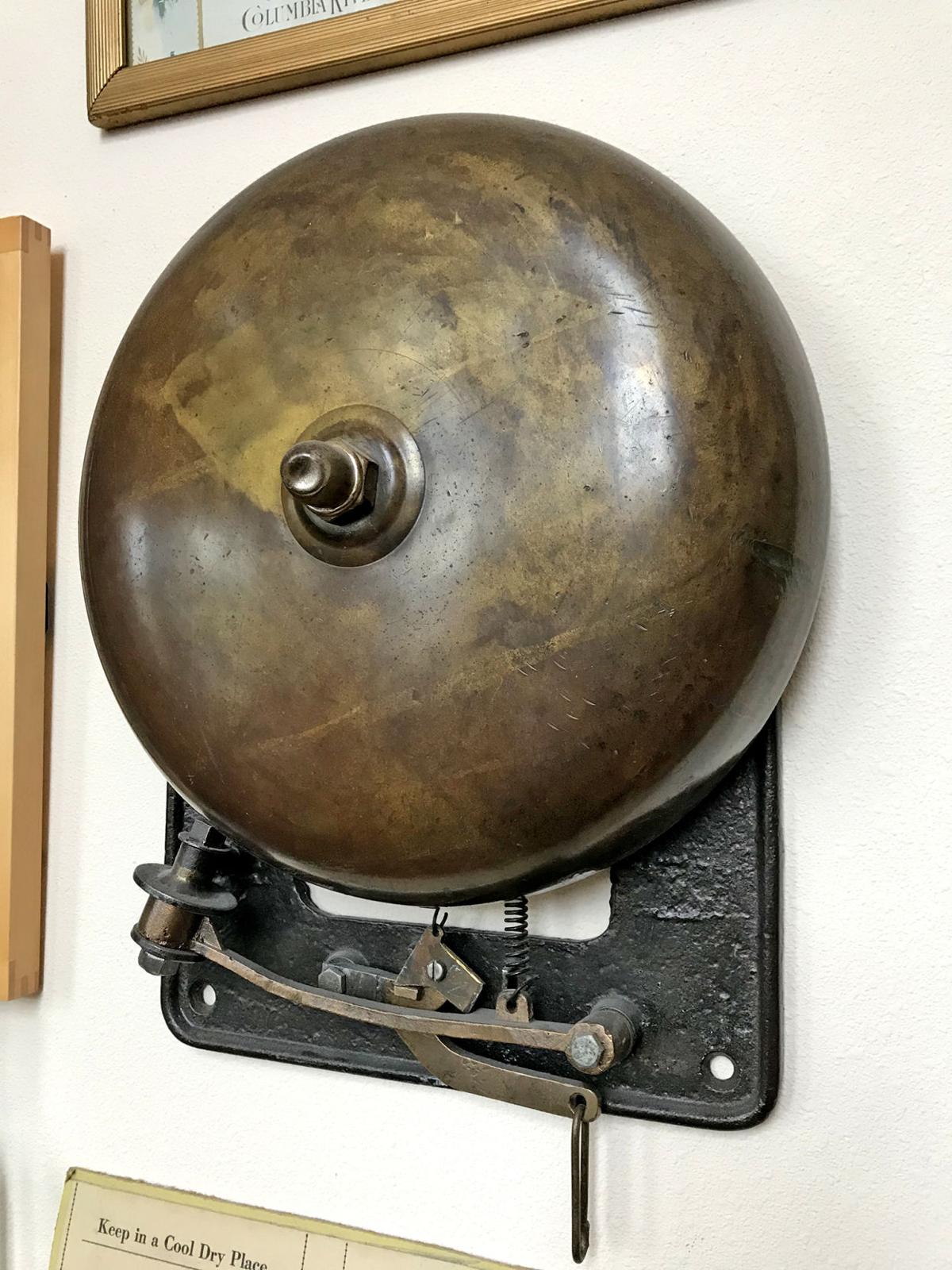 The signal bell for a mining hoist makes a sound so loud it threatens to awaken the dead.

An iron bull bell brazed with a copper alloy harkens back to ancient times in the Anglo-Saxon kingdom of Northumbria in what is now Northeast England. Beyond pragmatic farmyard functions, such bells are thought to have religious significance, an ancestral relationship to the bronze church bells of a thousand years later.

The signal bell for a mining hoist makes a sound so loud it threatens to awaken the dead.

“Ringing in the new year” with wild and pure noise is a folk favorite long predating the expensive and smelly ignition of fireworks. With mom’s Bell surname pumping deep in my veins, bell ringing reverberates in some Medieval backwater at the base of my brain.

My first bell was cast in brass and hand engraved in India, a cradle toy from Vic Rauzi, an Army colonel who roamed the world and brought back such trinkets for his godson.

Its ring is childlike, happy and unexpectedly loud. I’m sure mom was super thrilled. So much so that she “saved” it away until I was 5.

On my office wall is mounted a bell fit to raise the dead, a signal for the hoist operator in an underground mine. Designed to be heard over a riotous clamor of machinery, I’m shy about sounding it if anyone else is within a couple hundred feet. In most mines, rapidly repeated bells — seven in California, for example — meant an accident. A geyser of dust, fear and adrenaline blasted outward. Rescuers swarmed to save brothers, cousins, friends. In the library-like hush of a modern newspaper office, some superstition restrains me — a feeling that such a bell rang in jest might awaken a spirit of the netherworld.

But my strongest bells ring on a different wavelength altogether. They resound with emotion, not sound. Without setting out to collect them, the Bell family bells made their way to me. Humble working bells, each was handmade by some blacksmith — one or two perhaps by the infinitely versatile Lafe Bell, my grandfather. Hung around the necks of cattle and sheep, they not only facilitated retrieving livestock from cozy willow thickets down along the creek, but signaled danger with crazy clanging if ewes scurried to escape coyotes.

Without setting out to collect them, the Bell family bells made their way to me. Humble working bells, each was handmade by some blacksmith.

The prize is a bull bell of copper-brazed iron, a venerable artifact of bygone times. With a big rusted washer for a clapper, it sounds just like the past — of warm, clover-dotted pastures and vast, steaming wintertime exhalations floating through the pungent barn. Few immigrants would bother bringing such a humble object, but past generations of Bells in Northeast England would have instantly recognized it for what it is.

“What it is” may go profoundly deeper than simple farm functions.

Writing in 2019 in the Archaeological Journal, Hugh Willmott and Adam Daubney of the University of Sheffield report on finding a group of such bells dating from between the seventh and ninth centuries. Considering their context — a long-forgotten marsh island and possible religious sanctuary — they consider copper-brazed bells to be essential ritual items. Summarizing their findings, British Archaeology said, “Brazen handbells made from folded iron were not just functional items for ringing or hanging on animals’ necks, but were ‘imbued with symbolic meaning’. The discovery of such a bell … should be taken as a marker for an early Christian presence.”

It’s probable that a tradition of alerting preliterate villagers of important occasions — holy and otherwise — continued in grander fashion as early churches acquired large cast-bronze bells. Mainly used to remind parishioners of their prayer duties at specific times of the day, bell-ringing also communicated much else — most notably deaths and funerals. (Local English parishes used different codes, but it was common for a child’s death to be signaled with three strokes, a woman’s with six and a man’s with nine.)

“They also sounded in celebrations and thanksgivings, to honor eminent visitors, at weddings, and to mark holy days. The choice of which bell or bells to ring, for how long, and in what rhythm, was a code indicating what had occurred. Bells were widely believed to frighten away the demons of the air that cause storms and thunder,” the Oxford Dictionary of English Folklore says.

Back when the old year ended at winter solstice and the days happily began stretching out toward spring, there can have been no greater excuse for ecstatic bell ringing. Even after the official annual changeover migrated 10 days to the end of December, our ancestors persisted in raising the rafters by making as much noise as they could. These bells bespeak of joy and gratitude.

Ring out, wild bells, to the wild sky,

The flying cloud, the frosty light:

The year is dying in the night;

Ring out, wild bells, and let him die.

Later in his poem Tennyson might be speaking exactly to our time:

Ring out false pride in place and blood,

The civic slander and the spite;

Ring in the love of truth and right,

Ring in the common love of good.

Sing a song of bells

There are as many songs about bells as there are blossoms on a cherry tree.

As I wrote several years ago, an essential part of Christmas is rehearing the carols that conjure up living memories of childhood. Bing Crosby’s “Silver Bells” instantly transports me to the squeaking Naugahyde seat of my mother’s Buick at a particular intersection on a specific frigid, slushy December day in my hometown. We’re listening on AM radio to “City sidewalks, busy sidewalks | Dressed in holiday style | In the air there’s a feeling of Christmas | Children laughing, people passing | Meeting smile after smile | And on every street corner you hear | Silver bells, silver bells.” Today, thinking of those lyrics isn’t so much nostalgia as time travel: I can touch and smell and hear my Mom as we bustle around buying last-minute gifts for Christmas 1968.

Nowadays, my favorite “bell song” is Bob Dylan’s “Ring Them Bells.” Although its lyrics combine Dylan’s uncommon gifts for language with his hard-to-decipher imagery, I was won over by singer Sarah Jarosz’ cover version. Listen here: https://tinyurl.com/1jarosz-bells.

Dylan almost seems to have been listening as our village ancestors broke the winter silence with their brazen iron bells:

Ring them bells ye heathen from the city that dreams

Ring them bells from the sanctuaries cross the valleys and streams

For they’re deep and they’re wide

And the world is on its side

And time is running backwards

And so is the bride

No telling who “the bride” is supposed to be — it’s one of Dylan’s little mysteries. Writing of the lyrics in general, one online commentator smartly observes, “It’s a song of yearning … for the wake-up call, for a gathering, a clarification, and a judgement. It also feels to me like the kind of yearning that’s not so sure it will ever be satisfied.”

As this new year and decade begins, I hope all your wholesome yearnings are satisfied. Let’s all ring in the truth and our shared love of good.

Matt Winters is editor and publisher of the Chinook Observer and Coast River Business Journal.