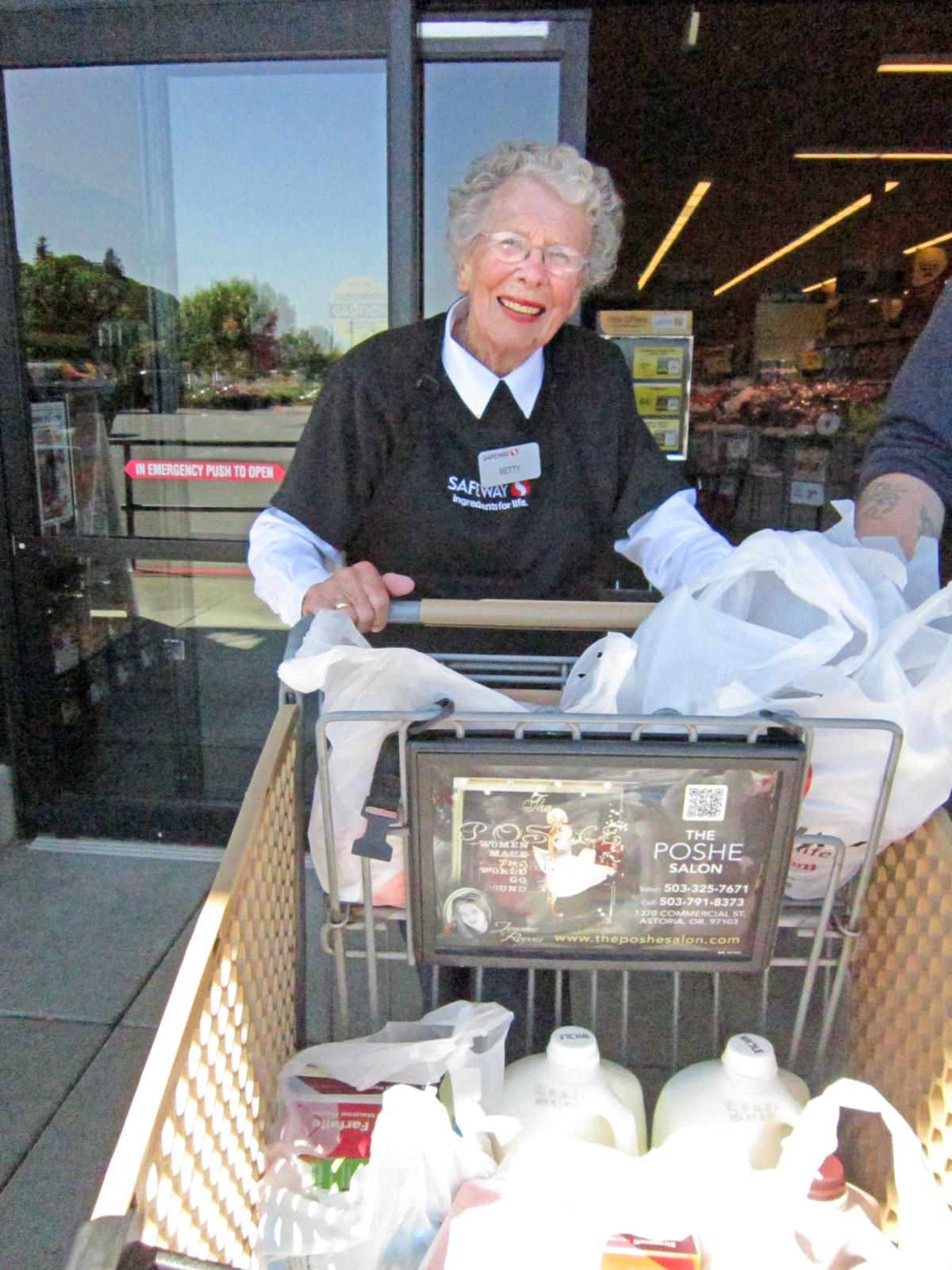 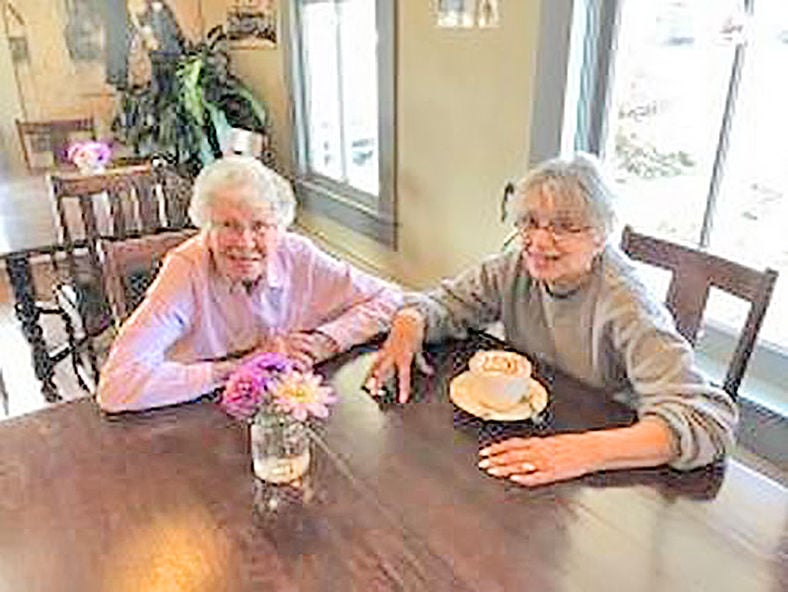 Betty and Sydney last visited in person in September 2019. Betty was on her way back from Alaska and stopped on the Long Beach Peninsula to “check up” on her friends.

Betty and Sydney last visited in person in September 2019. Betty was on her way back from Alaska and stopped on the Long Beach Peninsula to “check up” on her friends.

We had a number of conversations over the years, Betty Paxton and I. Some were by email (“My address is badbetty,” she told me.) and some were by telephone, but most were in person. Except for the last one which was just before Thanksgiving this year, I only remember a few. I don’t know whether to blame my fading memory or, more likely, the mind-numbing quality of November’s phone call which, for now anyway, has blotted out many of our other conversations.

“Sydney! It’s Betty!” came her familiar voice. She sounded “as usual” — a bit loud (“I don’t hear so well these days, even with the hearing aids.”), energetic, forceful. “What’s up?” I asked. “Well, I thought I’d tell you that I’ve just been to the doctor. Lately, I’ve been feeling less energetic than usual, so I thought I’d check it out. He says I may make it to Christmas but…”

I’m not clear what came next. I’m sure I was factoring in her 105 years and thinking… But I’m not sure what I was thinking? Nor am I sure what I said. But I can still hear Betty saying, “Well, I didn’t think I would live forever!” And my retort, “But you know, Betty — the rest of us did!” We didn’t laugh, exactly, but there were no tears either. That’s the way Betty had always been — practical, no-nonsense, positive and, as always, with her sense of humor intact. The perfect role model!

I remember her coming into the Bookvendor, bringing a bag of well-read paperbacks with her. It was in the early ‘90s, shortly after we had bought the store; shortly after my dad had died. And not long after Gene had died, too. “I hope you don’t mind that I got these at the used book store down the street,” she said. “I’d like you to take them to your mother. I found that reading trashy novels has been a great stress reliever since Gene died.” And, of course, the books were the perfect mind-numbing soporific for my mother, as well. Ever-practical Betty.

It wasn’t much later — (well, about a decade, but that’s a drop in the bucket when you’re in your mid-80s) that Betty went to work for Safeway. Yikes! Here I was, looking forward to my own retirement after 39 years in the classroom and Betty was signing on to a new job. She was 85! Talk about role models. “Suck it up!” I thought to myself when I bemoaned yet another round trip between Oysterville and Long Beach. Betty was commuting Long Beach to Astoria! Across the bridge! And she was 21 years my senior!

“You know,” she told me, “Gene had gone to work at a cranberry bog when he was 75. So, when I started at Safeway, our family referred to him as the ‘Bog Won’ and me as the ‘Bag Lady.’ I think a lot of other people began to call me that, too, eventually!” And her eyes twinkled.

“Are you in pain?” I asked her. “No, not at all. I’m just running out of oomph,” she said. “I’m doing a lot of sitting around.” She didn’t sound resigned; just matter of fact. They were planning a quiet Thanksgiving, she and her daughter Jan. “A roast chicken. Not a turkey,” she said. “Us, too,” I told her. “We’ll be thinking of you, BadBetty!!”

I had asked her once where the “BadBetty” came from. “College kids,” she said. “They got to calling Gene, ‘CleanGene’ and so, somehow, I became ‘BadBetty.’ My best friend here at the beach was named Betty, too, so we were the BadBettys together and had some great adventures. But she’s gone now — lots of my old friends are. The answer to that is to make younger friends! Of course, as you approach the century mark, that’s pretty much a necessity!” And we laughed. We laughed a lot, Betty and I.

Five years ago, or so, when I was talking to Betty about her upcoming retirement party, she confessed that she didn’t really enjoy all the fuss. “I might just go to Aruba instead,” she said. None of us breathed easy until we actually saw her arrive at the Heritage Museum for the grand event. It wasn’t long afterwards that Betty called with the news that she had broken her hip. “I just slipped off the barstool onto the floor and… wouldn’t you know?” she said. “Well,” I replied, “Maybe we should talk a little bit about that barstool… Are you still celebrating your 100th birthday? Or is it your retirement from Safeway that put you on that barstool?”

We laughed. I knew exactly which barstools she meant — the ones at the counter in her kitchen where she often sat to eat. Only this time she was baking cookies for a community event. “I think my backside is just too skinny,” she said. “If I try to sit with just one cheek on the seat… off I go!” And we laughed some more. Betty-of-the great-sense-of-humor and often at her own expense!

“I’m putting us on speaker phone so Jan can weigh in,” Betty said. “Keep me informed, please, Jan,” I said. But it was Betty who answered. “Oh, she will!” she said. And Jan did.

On December 7th, Pearl Harbor Day: “We had Mom in the hospital for two days and now at a care facility for comfort care. We really thought yesterday, since she wasn’t eating or drinking, that she was leaving us but, per Betty’s style, when we arrived this morning she was up and dressed and eating hot cream of wheat in the dining hall!” “You’re doing it again,” I wrote her. “Setting the bar high for the rest of us, Betty! You will always be my role model!”

I had the irreverent thought that maybe she had met them both in Aruba. None of us who knew her would be surprised!