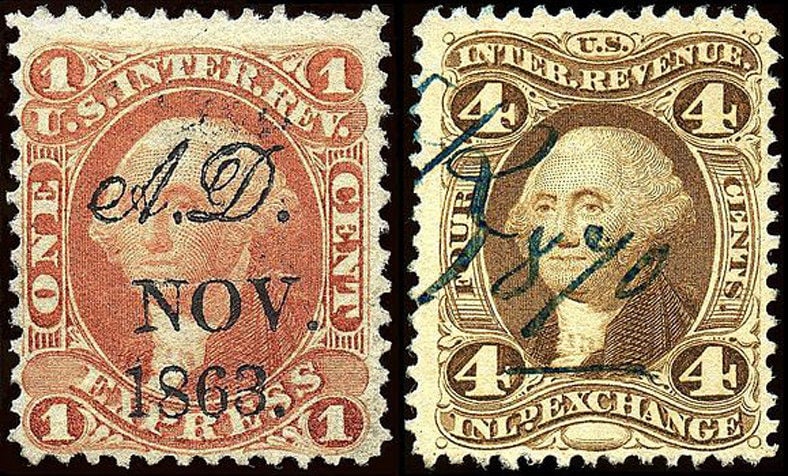 Revenue stamps were widely used in the 19th century, partly inspired by the success of the postage stamp (introduced in 1840), and partly motivated by the desire to streamline government operations Revenue stamps have become less common in the 21st century with the rise of computerization and the ability to track payments accurately. 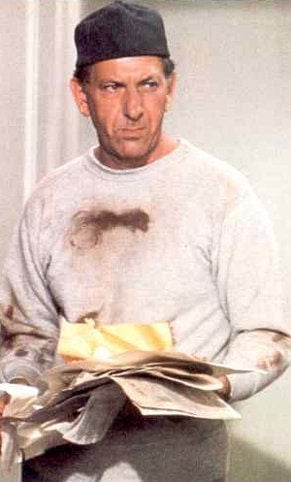 Played by Jack Klugman, Oscar Madison of the 1970s sitcom, “The Odd Couple,” was the casual, likable, quintessential slob. Like many of his encounters with the establishment, Madison's unconventional meeting with the IRS in the 1973 episode, “The Ides of April,” did not go smoothly.

Revenue stamps were widely used in the 19th century, partly inspired by the success of the postage stamp (introduced in 1840), and partly motivated by the desire to streamline government operations Revenue stamps have become less common in the 21st century with the rise of computerization and the ability to track payments accurately.

Played by Jack Klugman, Oscar Madison of the 1970s sitcom, “The Odd Couple,” was the casual, likable, quintessential slob. Like many of his encounters with the establishment, Madison's unconventional meeting with the IRS in the 1973 episode, “The Ides of April,” did not go smoothly.

Every year about this time Oscar Madison comes to mind. In particular, it is the Oscar Madison played by Jack Klugman on “The Odd Couple” TV series. Even more specifically, it’s Oscar in the episode called “The Ides of April” which aired in 1973.

Somehow, Oscar’s roommate Felix says the wrong thing to the IRS and Oscar becomes the target for an audit. I remember only the generalities — that he presents the auditor with a shoebox full of his various ‘documents’ in the form of crumpled scraps of paper, notes written on the backs of parking tickets, and even a receipt scribbled on a football. (You might recall that Oscar, in addition to having less than tidy personal habits, was a sports writer.)

I think of Oscar each January when our 1099 forms and other depressing paperwork start to roll in. Slowly, I begin gathering our own bits and pieces so that we can prepare the dreaded income tax forms. I always have dire thoughts that we, like Oscar, might be audited — a situation which I want to avoid at all costs, not so much because of the audit, itself, but more because it could potentially mean a drive (or many drives) to Olympia to the nearest IRS Assistance Center. Never mind that their website says: “Nearly every tax issue can now be resolved online or by phone from the convenience of your home or office.” My credulity factor doesn’t stretch quite that far when it comes to bureaucratic officialdom.

My particular audit avoidance technique: save everything. Every sales slip, every charitable donation form, every notation of mileage to and from doctors, every invoice copy from the sale of my books. Everything! Instead of a shoebox, I use file folders and large manila envelopes. So far, I’ve not acquired any receipts on footballs or other three-dimensional objects, but I wouldn’t be totally adverse to that sort of validation if need be.

I don’t think, however, that I share Oscar’s sloppiness trait in the matter of all those saved bits and pieces. Instead, I think it is my familial “Save Everything” gene that kicks in. But the organizing, cataloguing, indexing and other skills that might make a bureaucratic agency like the IRS happy… not so much. I leave that part of our income tax preparation to Nyel and, ultimately, to a professional. So far, over the years, so good.

Recently, one of my “kissing cousins” (a third, once removed, I think) sent me a ledger that had belonged to a mutual ancestor. The small notebook is titled “Salem Prairie, September 12th, 1870 Delos Jefferson’s Day Book.” The writing is meticulous (also not a gene I inherited) as are the next 132 pages of accounts. The log covers nineteen years, though it’s sometimes difficult to interpret what, exactly, the entries mean. Styles in accounting, like the use of language, itself, have altered quite a bit over the last 150 years.

Delos was born in New York, began the trek West on the Oregon Trail in 1847 and, after spending that winter at Fort Hall, arrived in Portland in the spring of 1848. He was 24 years old. He had studied music at Oberlin College in Ohio and for a few years taught singing to students in the Portland area and was a member of the choir of the old Taylor Street Methodist Church. Some time after he married Jane Apperson in 1850, they moved south to Salem where Delos became a farmer, a carpenter, and a shoemaker. The first of their eleven children was my great-grandmother, Julia Ann Jefferson Espy.

Though his Day Book is slim evidence as to Delos’s character, it does reveal that he was a civic minded, concerned Oregonian with regard to paying his taxes and keeping accurate accounts. The very first entry, made on Sept. 1, 1870; noted under the name J.C. Nuson, a credit of $2.50 “by cash for Revenue Stamps.” The next entry is a debit of “.75 “to four halter ropes” and, then, a debit of $1.62 to J.C. Nuson again “to cash for revenue stamps.”

I remember learning about revenue stamps in fifth grade, when we studied about the 13 Colonies. I associate them with the Stamp Act and the Boston Tea Party. Fast forward to 1861 when the U.S. (Union) government enacted the Revenue Act of 1861 as a means of paying for the Civil War. It levied a 3 percent flat rate tax on those with an annual income at or exceeding $800 — our nation’s first income tax.

In addition, the Revenue Act called for taxing a variety of goods, services and legal dealings. To confirm that taxes were paid, a revenue stamp was purchased and appropriately affixed to the taxable item which would, in turn, pay the tax duty involved. The regulation was allowed to lapse in 1872 and, indeed, references to revenue stamps do not show up in my two-times-great grandfather’s Day Book after that year.

I have yet to study the Jefferson Day Book very carefully but I must say that the detail he included is impressive. I wonder if he was just doing what he considered his “due diligence” by keeping such meticulous lists of lumber delivered and pounds of potatoes purchased. Or was he enumerating those lists of credits and debits against the possibility of an audit by government officials? It’s a little late for Oscar to take note. But probably not for me.