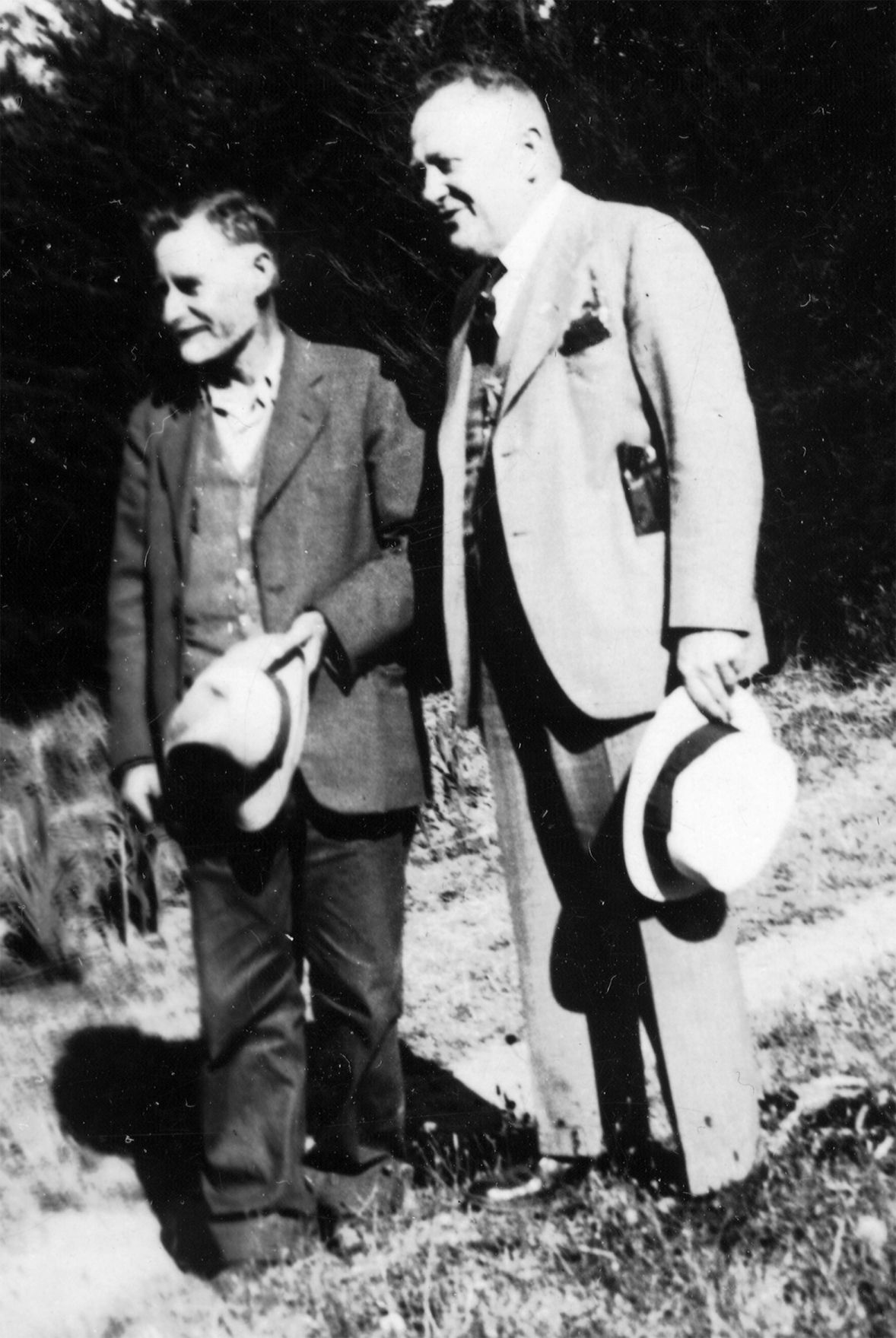 Harry Espy, left, and Louis C. Wachsmuth, pictured here circa 1945 were boyhood classmates at the Oysterville School back in the 1880s. Their friendship endured throughout their lives and they always enjoyed “a good visit” when they got together. 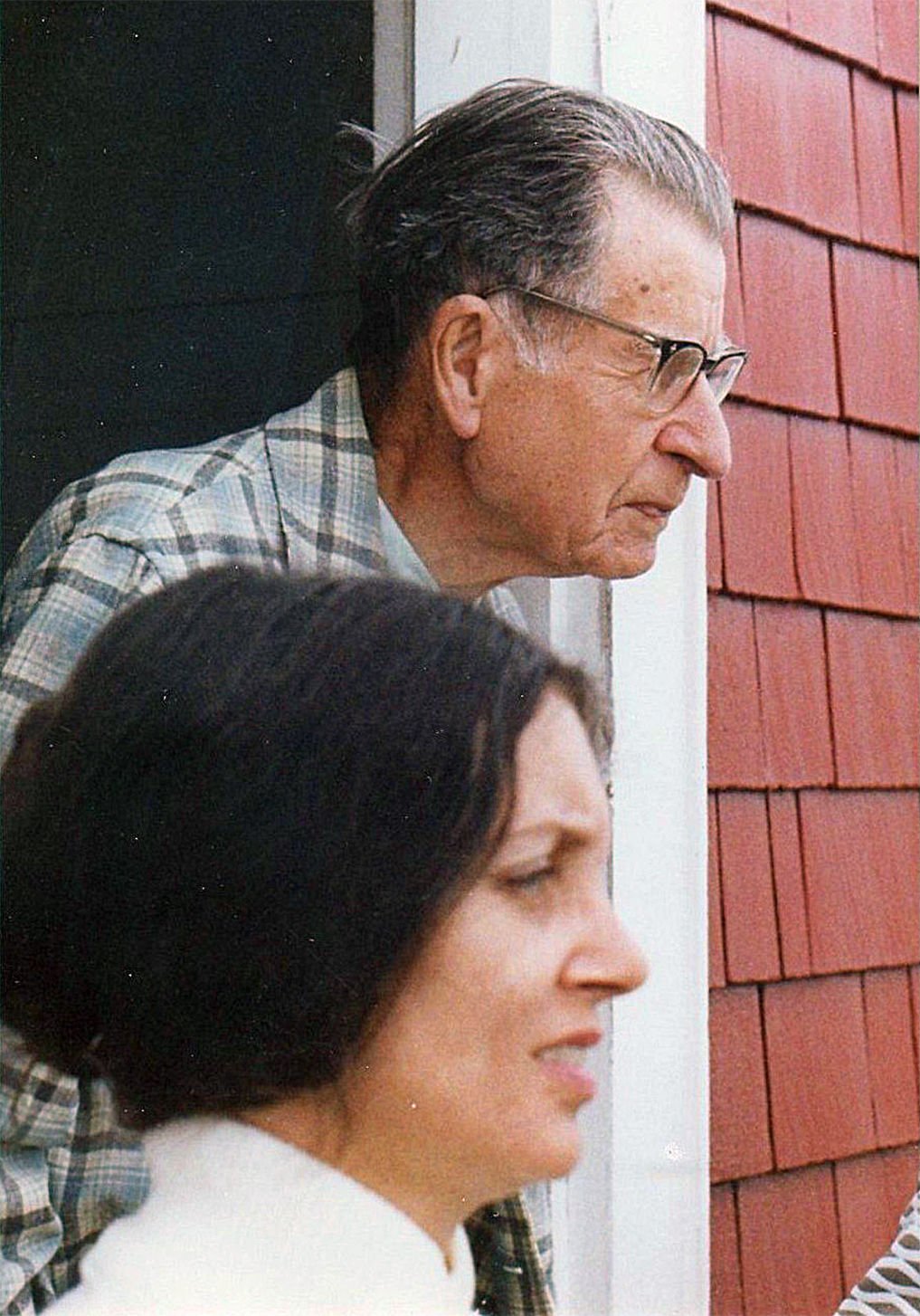 Sydney Stevens and Cecil Jefferson Espy look out over Willapa Bay from the balcony of the Red House in Oysterville, 1978. “He was showing me where each of the seven rivers enter the bay. You can see them all from there.”

Harry Espy, left, and Louis C. Wachsmuth, pictured here circa 1945 were boyhood classmates at the Oysterville School back in the 1880s. Their friendship endured throughout their lives and they always enjoyed “a good visit” when they got together.

Sydney Stevens and Cecil Jefferson Espy look out over Willapa Bay from the balcony of the Red House in Oysterville, 1978. “He was showing me where each of the seven rivers enter the bay. You can see them all from there.”

Among my fondest childhood memories are the times I sat, quiet as a mouse, listening to the old folks talk. Usually it was the men — the women were busy in the kitchen, shelling peas or washing dishes and God forbid I should be put to work doing something so boring. It wasn’t until years later that my cousin Alice said she always offered to help in the kitchen. “That’s where I learned about all the family skeletons,” she said.

Alice was older than I, and probably wiser. Certainly, she knew more about the ways of the world. I favored listening to the stories about the olden days when Oysterville actually had a fort and the Indians helped build it! Now that was interesting. Sometimes, especially when my Great Aunt Dora joined the group, the stories must have gotten a little bawdy. Even though I tried to be invisible, someone was sure to say “Little pitchers have big ears,” and I was sent on an errand or out to play. I probably should have joined Alice in the kitchen.

I associate those times with fall and winter when evening came early and nights were dark and long. My grandfather would entertain his cronies in the library in front of the fire and they would talk and laugh the afternoon or evening away. As I recall, it would begin with the doorbell ringing and there on the porch would stand an old friend of my grandfather’s — maybe Mr. Louis C. Wachsmuth from Portland or Mr. Walker Tompkins, “in town” for a visit with his uncle Guy Allison who owned The Wreckage in Ocean Park.

I don’t know if those neighborly visits were pre-arranged but, whether they were or not, the welcome was always a warm one. Coffee and cookies or cake were usually offered and accepted. My grandmother and the other women stayed long enough to exchange family news, and then left the rest of the afternoon’s visiting to the men. (And sometimes Aunt Dora.) If my uncles and my dad were in town, they joined Papa and it wasn’t long before the storytelling began.

Sometimes the reminiscing started with a simple question. “Do you ever hear from…?” — some old friend or long-lost relative that everyone knew once upon a time. One thing would lead to another and soon they were off and running. I wouldn’t say they were telling tall tales, exactly, but I don’t know that they stuck to the facts all that much, either. Mind you, that observation is in retrospect — at the time I took everything my elders said as gospel. And actually, as I learned later, that was pretty much the case.

I especially loved the stories about the Indians who, until the 1880s or 1890s, had lived in Uppertown on the bay side of Territory Road just south of the S Curve beyond the Charles Nelson house. It was where the early oystermen had built some “permanent” housing to encourage their Indian workers to stay year-round. For centuries before white settlement, the Indians had camped in the area on a seasonal basis — to gather wild raspberries and to hunt seals up at the point.

I don’t know if the oystermen’s scheme worked or not. Even by the time of my mother’s childhood in the early 20th century, the buildings had been abandoned and, in my memory, no buildings were left at all. Dobby Wiegardt says that Uppertown was a half-mile farther south… it’s an ongoing discussion between us. (Where are those old folks when we need them, anyway?)

At any rate, the story that might have been partially a tall tale is about the building of the Oysterville Fort north of town. It often began with a question like, “What ever happened to old George Hunter? You know… the fella who was sheriff once. Didn’t he help build the old fort?” I heard the story numbers of times and I’m sure Willard heard it dozens. Finally, he wrote it up in his book, Oysterville, Roads to Grandpa’s Village. It’s just the way I remember it being told.

The Fort at Oysterville

In the 1860s, reports of Indian uprisings sent spasms of apprehension through Washington Territory and forts rose in the forests in alarming numbers. Even Oysterville, perhaps more to be in fashion than through true worry, organized a militia. R.H. Espy was elected commander with the rank of Major.

Finding that the available ordnance was limited to a dozen dubious jaeger rifles and a few shotguns, grandpa dispatched an urgent plea back east for modern weapons. He also ordered his men to construct a fort north of the village. It didn’t occur to anyone to set up a picket stockade around the fort, and for the next few weeks the Siwashes spent much of their time at the edge of the clearing exchanging ribald comments among themselves while the white men sweated; though, for hard cash, the reds did occasionally lend a hand with the fitting of one log to another.

By the time the walls were in place, it was generally agreed that the Siwashes had never represented a danger. Besides, an exceptionally good run of oyster tides was due, and not to utilize them would have been criminal negligence. So, the militiamen never got around to putting a roof on the fort. Instead they returned to their oystering.

A few months later, the weapons grandpa had ordered — rifles as good as most fired later in the Civil War — reached Oysterville. The settlers, having enough guns already for their hunting needs, sold the government issue to the Indians. And that’s how Espy became a Major!

Lynching at the jailhouse

Another story I remember hearing was about the lynching at the Oysterville Jailhouse over on School Street. It happened in 1891 back when Papa and Aunt Dora were teenagers and were away at school — Papa, 16, at the Baptist Seminary in Centralia and his older sister Dora, 19, at McMinnville (now Linfield) College. Neither was at home in Oysterville when a South Bend mob, disgusted with the slow pace of justice, snuck into town in the middle of the night and took the law into their own hands.

They were after convicted murderers John Rose and John Edwards, who were locked in the two-man cell behind the Oysterville Courthouse, awaiting a change of venue for a new trial. The 44 masked men, failing to get into the iron jail cell, fired through the barred windows and their bullets ricocheted around the walls, killing the two prisoners who were crouching out of range in the corner. After the mob had finished their dirty work, they slunk away into the night.

The next morning, my great-grandfather, R.H. Espy, walked his not-quite-4-year-old son Cecil the 3 blocks from their home to the scene of the lynching to view the bodies still lying in their blood. “My boy,” his father told him, “this is what you get for breaking the law.”

I was to hear the story many times over the years, more than once from Uncle Cecil, himself. He never forgot the incident, though he lived to be 95. And I never forgot the first time I heard that story in front of the hearth in our very own library. To me, a little girl of the civilized mid-20th century, no ghost story could come close to that particular reminiscence! That it really-for-sure had happened right here in Oysterville and Uncle Cecil had actually seen the bodies … totally horrifying and way, way shivery!

Now that my contemporaries and I are retired, we have more time for visiting and storytelling. The missing part is usually the little pitcher with big ears taking it all in. Somehow, we need to remedy that. For posterity.