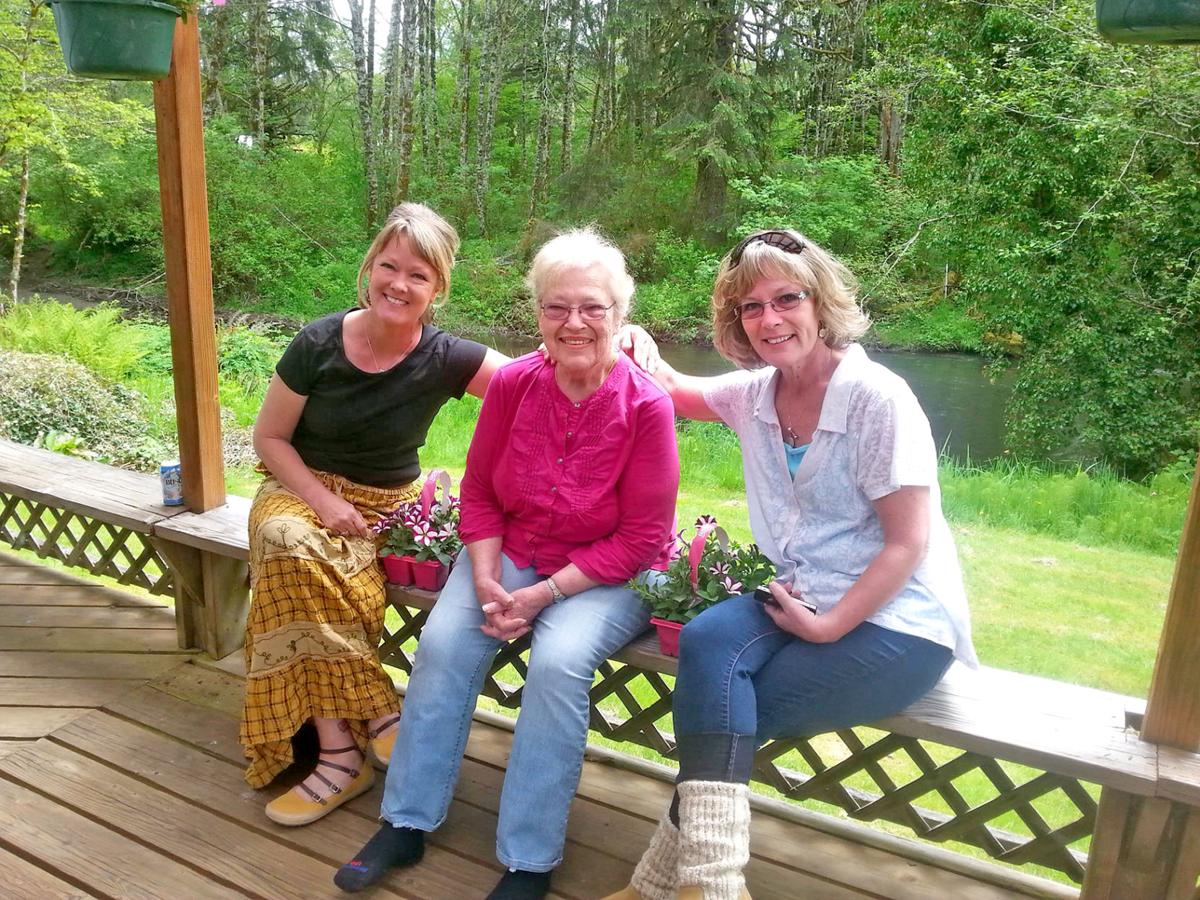 Leisa, Bernice and Laurie sit on Bernice’s back deck above the South Fork of the Willapa. 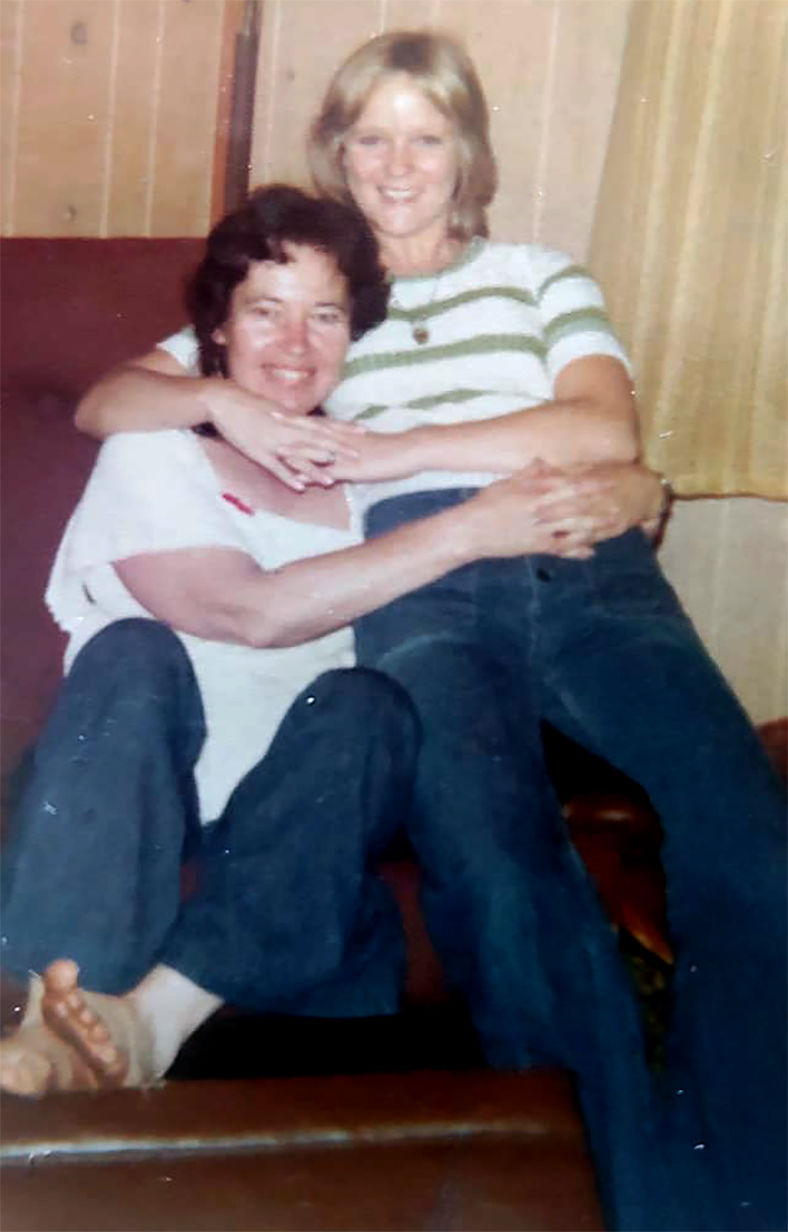 Bernice and Leisa pictured in the 1970s. 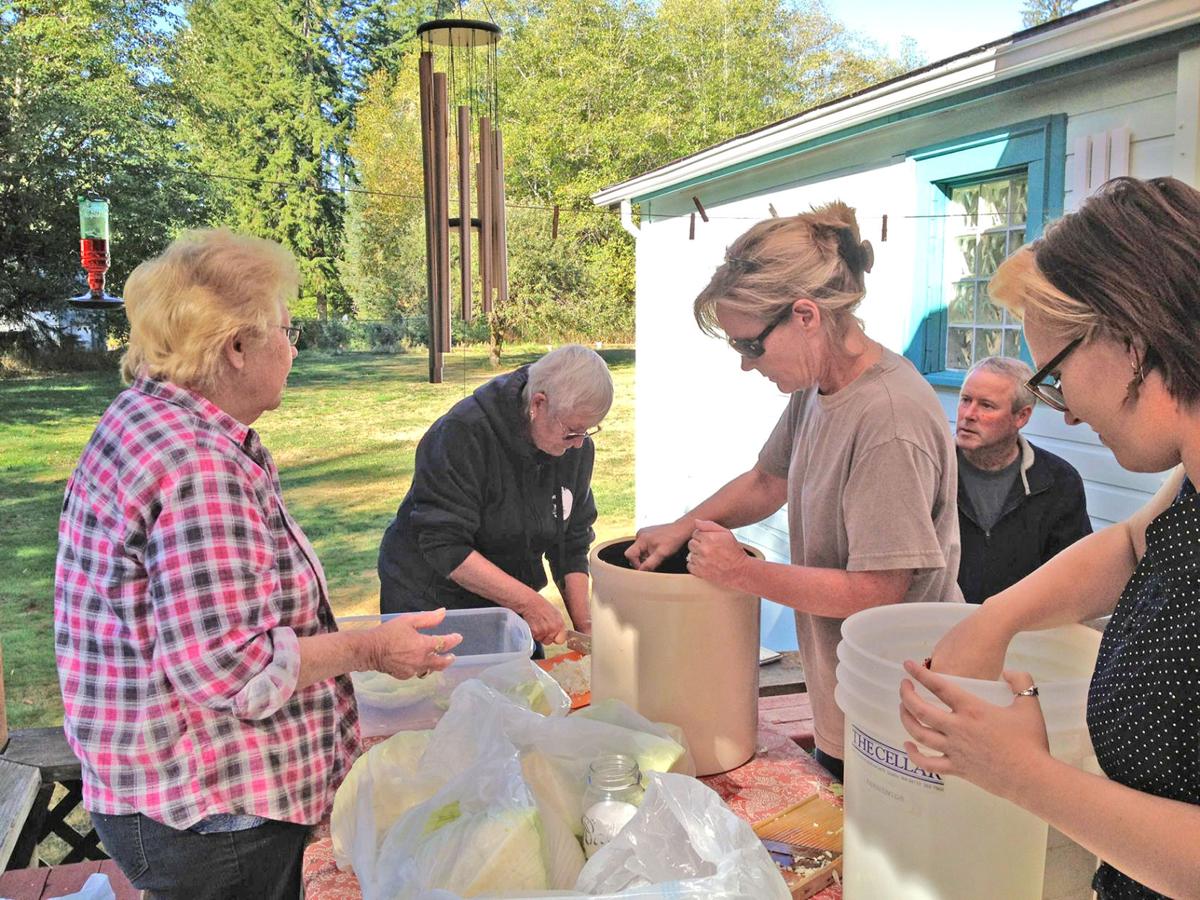 The family gathers to make sauerkraut at mom’s on her deck. 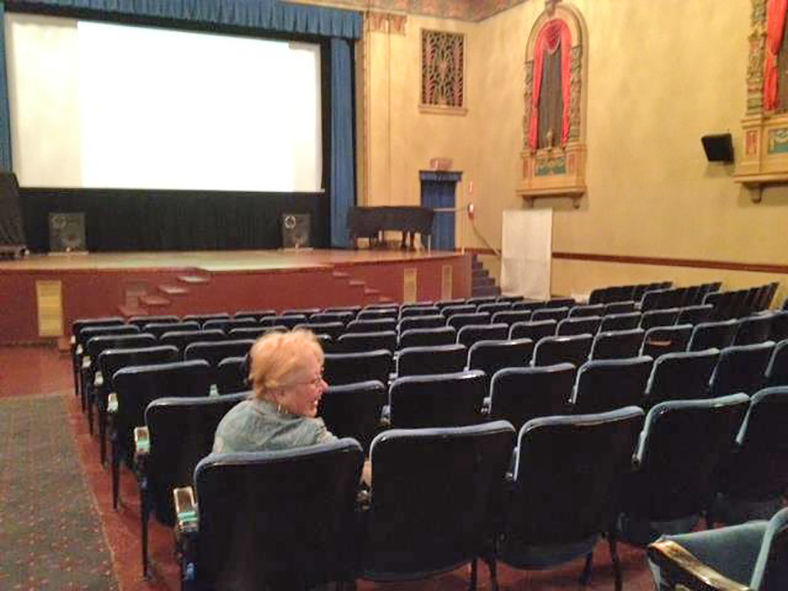 Bernice Jennings sitting in the historic Raymond theater in seats that she reupholstered. 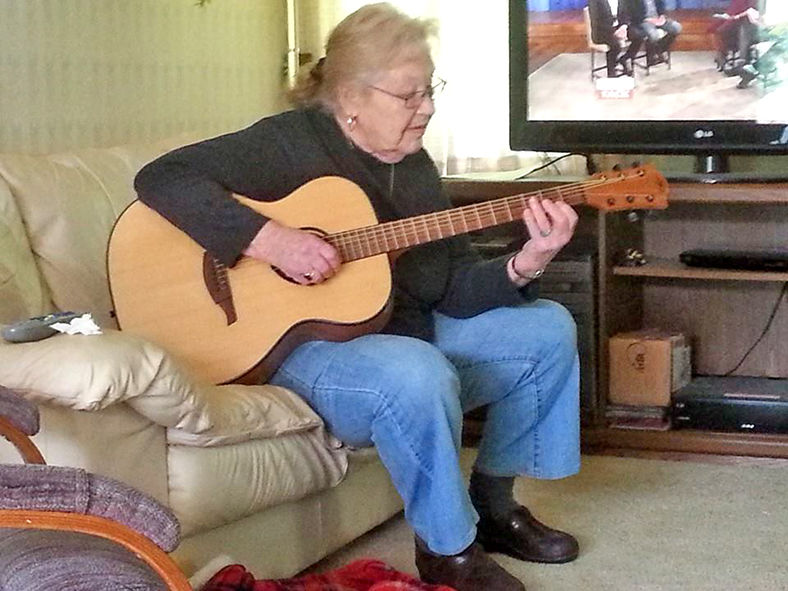 Bernice Jennings set herself the challenge of learning to play the guitar. 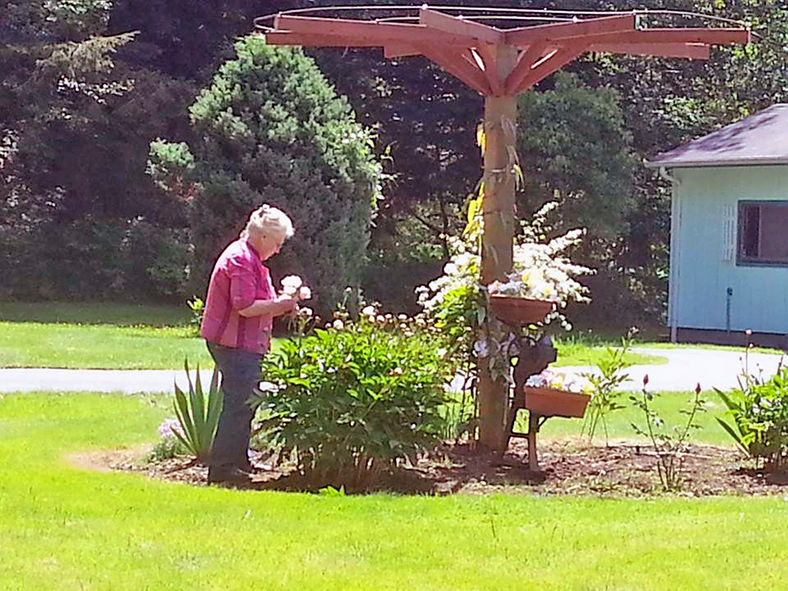 Bernice tends to her flowers in front of her house on the South Fork.

I felt this gaping hole in my heart when my mom went into the hospital with congestive heart failure. I woke to my own ticker pounding at an alarming rate. Then a hush suspended me. I knew something was missing — something was wrong. You know that feeling? Then it hit me. Oh, Mom is in the hospital.

It is easy to take time with Mom for granted, because I can’t feel the emptiness until an event like this shifts my being and forces me to face a precarious reality. The idea that I can’t just pick up the phone and call Mom — the fact that she is on oxygen and has a machine to help her breathe, and I cannot hear her voice. It is then that I reflect on the times quietly sitting on Mom’s deck overlooking the South Fork of the Willapa River — time spent chopping cabbage to make sauerkraut on her deck or playing Ching Chang Chung at her kitchen table. How quickly life changes. It was only a month ago that I could drive the eight miles from my house, past the golf course to her house on the South Fork at any time and hear her welcoming voice. She would often be listening to music or reading, but with the progression of vision loss, she spent a lot of time listening to books on tape or Judge Judy. We don’t visit our moms every day of the year. We simply can’t. But when we are reminded that we may lose them, we kick ourselves for not seeing them 24/7.

My mom, Bernice, moved out to the South Fork in 1969 and began working from the hayloft in her old red barn reupholstering furniture to provide for her family. When she was able, within a few months, she built her own small shop by her house with the help of her son, Randy, where she operated her business until a few years ago.

Mom is originally from the small farming community of Haubstadt, Indiana. Her grandparents emigrated from Germany through Ellis Island. She married my dad, Wilbur Jennings, from Owensboro, Kentucky, in 1953, and later moved with dad and us four kids to the state of Washington, settling in South Bend. Initially, Mom and Dad worked together to learn the upholstery business; he doing the tearing down of the furniture, while she expertly learned and performed the sewing end of upholstery.

As it was necessary, Mom was soon able to take over all aspects of the business. Acquiring jobs by word-of-mouth brought in plenty of work so advertisement was seldom necessary, although at one point she did place her first ad with KAPA radio in South Bend, which aired every morning for 30 seconds for $30 dollars a month.

She was a highly regarded business owner in Pacific County, having done jobs that not only ran the gamut of household and automotive reupholstering, but also such things as recovering the pews for five local churches. One year, Mom reupholstered the seats for five vintage cars for the South Bend Labor Day parade, which included recovering whole interiors and sometimes even rumble seats. She worked on motorcycle and dirt bike seats, car interiors, and even took on the challenge of recovering the dashboard, seats, and entire walls of one special van. Mom has worked locally on benches and exam tables for hospitals, veterinary clinics and restaurants, in addition to fulfilling one of her more creative requests, which was to make sheepskin coats for “coon hunting dogs.” If there was a will, there was a way.

In 1992, with the help of her nephew, Tracy, mom covered the seats in the historic Raymond Theater. From doctor offices to churches, she tackled any job that came her way, honestly and artfully, working with the community to provide quality workmanship and renewing furniture that had the “good bones” but had just run their course in life. She gave them life.

To supplement her income for Jennings Upholstery, Mom recalled with great pleasure her experience at one point of working at the Raymond Weyerhaeuser shake mill, where she was the only woman employee, (the second woman to ever work for the shake mill). The first woman, unfortunately, was found a few too many times asleep in the wheelbarrow. In steel-toed shoes and a hard hat, Mom closed the third shift with her deck job, running the cut-off saw and operating a forklift. She enjoyed this job for three years, at which time her business, Jennings Upholstery, was successful enough for her to support herself and her children without a full-time job at the mill.

After 50 years, Mom began losing her eyesight and was forced to retire her Adler sewing machine as her vision disorder, macular degeneration, progressed. As her vision worsened, she lost the freedom of driving a car, and eventually she became only able to simply discern shadows. Still, she has lived alone on the South Fork until just recently when she was admitted to the hospital. Though unable to see, she was still playing cards with the “girls” on Fridays, and on most days went to the Senior Center in Raymond where they serve meals generously prepared from the onsite kitchen. Mom can’t see, a few of them can’t hear, and some can’t walk, but they relax back into the comfort of their own generation.

At age 90, Mom is still the adhesive holding our family together. Her four children, of whom I am the youngest, don’t always get along like chums, but we all have a bond because of Mom. It is her house in which we congregate, each of us having a special compartment in her heart. At gatherings, some might be in the kitchen talking trash about the ones in the living room, and the ones in the living room talking trash about the ones on the deck, but Mom’s house is home to all of us. We all belong there.

Mom has inspired not only her children, but her grandchildren, and great-grands. She has always encouraged the arts and loves music and family. When she still had a bit of vision, my sister was teaching her to play the guitar, something she always dreamed of doing. She had listened to the family play music her whole life, but wanted desperately to play herself. My sister drew out huge music notes on sheets of paper spread over the entire kitchen table and mom practiced diligently, but her eyesight prevented her from becoming proficient — God knows, she tried. She was able, however, to learn to play the three chords to Hank Williams’ “Wedding Bells,” and harmonize singing it with my sister. Mom won’t be going back to her house to live again. It briefly sits empty and even the mice seem to have packed up and left the silence. There is no end to the memories I have growing up in that house, but without Mom there it feels hollow.

We know that death awaits us all. I think of Mom at her house making popcorn and listening intently to all of the news of our lives, taking a keen interest in it all. She rarely talks of herself but rather listens, genuinely fascinated. I want my mom back like that. There is a feeling of sadness with each news briefing I get from the hospital of how she is “going strong” or “pepping up,” because I know that she is tired. At best, she will be going home with a CPAP, an oxygen tank, and unable to see the world around her. Her quality of life will never be what it was as she patiently waits her turn to meet her maker. The news I want — the news I demand — is that she is going to live forever and be back in her house hosting family reunions. See? We all want the impossible. We can’t let go. But enough is enough. When time is up, it’s up. This is what life gives us, some more time than others, to make our impact on this world before it is our time to hand it over to the next generation.

Mom has significantly impacted all of our lives, more than she will ever know. We all have our favorite story of Mom and what a great sense of humor she has. My daughter, Madison, still tells the story of going to Fort Clatsop State Park and Mom getting a “Golden Age” pass from the office. Mom said sarcastically, “Golden Age, my ass!” She is a great lady who taught me generosity, kindness, creativity — so many things that I could spend a day listing them all. She taught me to “eat the chicken and throw away the bones.” If anyone does, she deserves to live forever. Hell, she doesn’t even drink alcohol. Her only vice is cigarettes. Mom is a shining exemplary role model who imparts her kindness to all who know her. My medium said that my son will be there to greet his grandmother when the day comes.

During the two-week hospitalization, Mom had a long time each day to ponder as she clung to life’s feathery edge. It was definitely touch and go as she lay breathing with the assist of an oxygen tank. We all said our goodbyes. Surrounded by a family desperate to see her pull through, Mom began to slowly improve. In one heartening visit, her cardiologist came in and pulled a chair close to her. He spoon fed breakfast to her as he asked questions about her life and family. That cardiologist deserves a medal for the compassion he exhibited. Mom remarked comically, “I don’t think I’ve ever had breakfast with a cardiologist.”

The coronavirus didn’t help the situation as mom had to go into quarantine on her last few days there with a spiked fever. No visitors allowed. My brother insisted that she at least be allowed one visitor. Taking pity on her blind isolation, they made an exception and allowed one person only, once a day, to see Mom, as personal protective equipment was short. So my sister-in-law suited up like an astronaut each day to sit with her. I can only imagine how scared Mom was, unable to see and in isolation. At one point, in blind confusion, she told me she wondered if we had all forgotten her there.

Fortunately, for all of us, this wasn’t Mom’s time, and I am grateful for just one more day to talk and laugh with her. At some point I will have to rearrange the furniture in my head and let her go. She will decide when she’s ready.

After leaving Willapa Valley at 17 to “catch the moon,” Leisa Jennings returned after 36 years following the tragic loss of her son. She wraps herself in the comfort and solitude learned in the hushed forests of Pacific County.