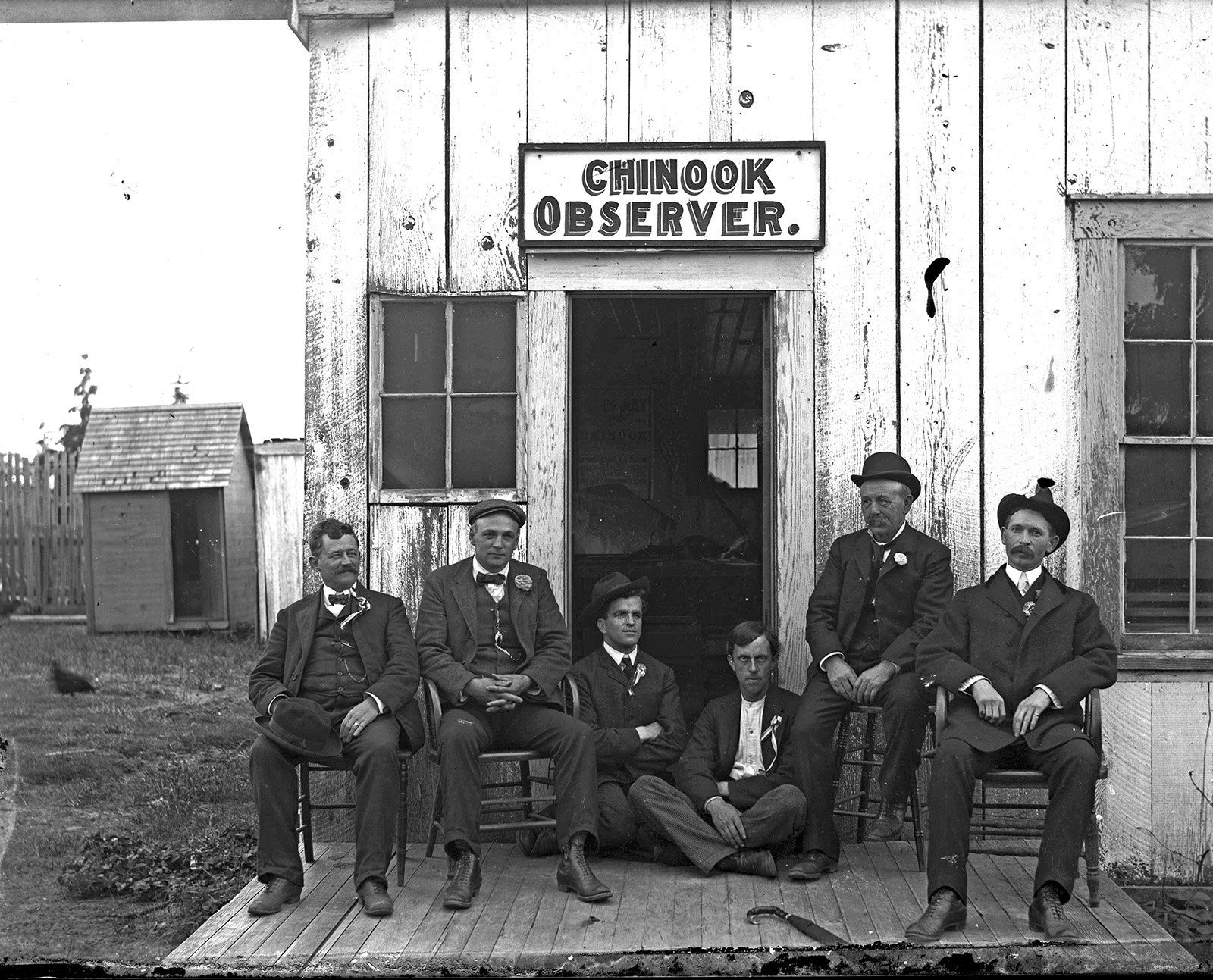 The Chinook Observer's staff and some members of the Chinook community gathered for a photo on July 4, 1903, outside the "funny little shed" that was the publication's first home before building its own headquarters in 1905. George Hibbert, seated left, was one of our founders.

The Chinook Observer: A continuing dedication to excellence

The Chinook Observer, 2018-19 Washington state Newspaper Community Service winner, is the 118-year-old news source for an island-like seashore peninsula on Washington state’s wild outer coast, where the Columbia River meets the Pacific. We are a small paper that does big journalism in print and online.

Vanity Fair’s Buzz Bissinger and Oregonian feature-writing star Tom Hallman — both Pulitzer Prize winners — are among our neighbors and subscribers. Krist Noveselic of Nirvana is another active member of our amazing communities.

“Your paper represents all that is good in journalism. You respect your readers, challenge them when need be, and remind them of the place and people in the community they call home,” Hallman commented.

The Chinook Observer was started late in 1900 by two investors named Hibbert and Gaither. Gaither's involvement was short-lived, but Hibbert lived in the Chinook area and was publisher for many years.

Within weeks after it was founded, the Observer was joined by Charles Angus "Jack" Payne, who wrote many of the paper's colorful early reports about pioneer life on the Columbia River. He arrived on the Peninsula in a very unusual way, as the survivor of a famous shipwreck.

The Strathblane, a three-masted British ship, wrecked four miles south of Ocean Park on Nov. 3, 1891, with a loss of seven lives, including her captain. The wreck of the Strathblane led directly to construction of North Head Lighthouse, which celebrated its centennial in 1998. An original architectural drawing of the lighthouse now is the front-page logo of the Chinook Observer.

Payne and Hibbert started publishing the Observer in a "funny little shed" — pictured above — in Chinook. In 1905, the two men built a two-story building, the only one of its kind in the area. That building still stands.

A townsman said "The printing presses and office were located on the ground floor and his living quarters were above. [Payne's] bedroom was a small ship's stateroom, complete to built-in bunk, a port hole and ship's clock."

In about 1923, Hibbert sold the newspaper to John and Margaret Durkee. They operated the paper through most of the Depression years. With the outlawing of fishtraps in 1933, Chinook went into a sharp decline. Bill Clancey of Chinook bought the paper, and in 1937 James O'Neil became co-owner. O'Neil moved the paper to Long Beach in 1938, but retained the original name because of its historic connotations.

Much of the newspaper's printing equipment from its earliest days is on exhibit at Columbia Pacific Heritage Museum. The Observer now is printed at The Daily Astorian each Tuesday night.

O'Neil's son Wayne and his wife Frances took over the paper in August 1963 and operated it until July 1, 1984, when it was sold to Craig and Geri Dennis, the son and daughter-in-law of the owner of Dennis Company hardware stores in Raymond and Long Beach.

On Feb. 16, 1988, the East Oregonian Publishing Co. (now EO Media Group) bought the paper from the Dennis family. In 1991, Matt Winters was named Observer editor and he remains in that role. The Observer's beautiful cedar-shingled building is located in downtown Long Beach on the main Bolstad beach approach street.

The Observer has a circulation of about 5,000. Its staff has won hundreds statewide awards in recent years, often finishing first, second or third in annual General Excellence judging.

The Chinook Observer celebrated its 100th anniversary in 2000. Robustly healthy, it remains committed to thoroughly and thoughtfully covering the lives and times in its fascinating corner of Washington state.