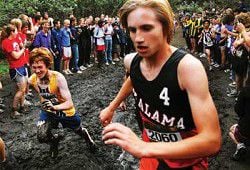 <I>Photographs by DAMIAN?MULINIX/Observer photojournalist</I><BR>Despite a fall that left his legs, hands and neck covered in mud, Ilwaco freshman Tanner Weidner, left, still finished 11th in his division on the "difficult" course. 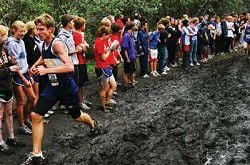 <I>Photographs by DAMIAN?MULINIX/Observer photojournalist</I><BR>Naselle's Conor Smith chose to forgo as much of the mud pit as possible by traversing the edges while competing on the "difficult" course Saturday.

<I>Photographs by DAMIAN?MULINIX/Observer photojournalist</I><BR>Despite a fall that left his legs, hands and neck covered in mud, Ilwaco freshman Tanner Weidner, left, still finished 11th in his division on the "difficult" course.

<I>Photographs by DAMIAN?MULINIX/Observer photojournalist</I><BR>Naselle's Conor Smith chose to forgo as much of the mud pit as possible by traversing the edges while competing on the "difficult" course Saturday.

SEASIDE - Imagine going to a Cajun restaurant and instead of ordering what you want, you draw randomly from a mild, moderate, or extra spicy main course for your fare and if you get spicy then mud, sand and a large hill is included, twice. Then imagine you are among 1,500 males and 1,200 females at the dinner table. Well that's what the Seaside Three Course Challenge is like and both Ilwaco and Naselle cross country teams sampled a bit of each item on the menu with excellent results as they competed against over 100 schools from Oregon and Washington at Camp Rilea Saturday.

Lady Fisherman Cameo Ulbricht was the highest finisher in her division (Ilwaco was in division four for schools with enrollment 301 to 600 and Naselle was in division five for those schools with 300 and under), finishing second on the easy course with a time of 21:00. Stephen Berglund was fourth for Ilwaco in the boys' easy course in a time of 18:10. Overall Ulbricht was 15th out of 356 girls and Berglund 34th of 386 runners in the easy race. The top 10 runners in each of the five divisions in each of the three courses were awarded ribbons for their efforts.

Next was Naselle's Cramer Smith coming in fifth in the easy race in division five in a time of 20:25, good for 138th overall. Both Ilwaco's Mitch Mortenson and Naselle's Nathan Reitz were eighth in their respective divisions and races after drawing the hard course. Reitz was 99th in 25:36 and Mortenson finished 105th in 25:44 out of almost 600 runners who "won" the right to tackle the sandy, muddy, hilly and most difficult course.

Ilwaco coach Sarah Taylor said, "Cameo ran a great race and Mitchel ran a smart race in tackling a very difficult course. Stephen ran well like we have come to expect from him." Naselle's coach Scott Smith related, "It was perfect weather and with all the teams and all the colors this event is a real party. Each race began with a drum corp pounding out a rhythm. Nate ran an excellent race and he finished in double-digits (99th), our first Naselle runner to ever finish below 100th place at the Three Course Challenge. He passed 10 to 15 guys at the end."

Coaches Taylor and Smith agreed, "All of our kids competed well and all enjoyed the challenge." Smith added, "The race is extremely well organized. Just a few minutes after the final competition we were supplied with team results." It is the largest running event in the Seaside area each year other than the summer-time Hood to Coast run.

Ilwaco's Tanner Weidner finished eleventh and out of the ribbons on the difficult course by a few seconds as he was 167th in 27:10 as the freshman continues to shine in his first varsity season. Adam Taylor was 480th in 36:36 and Rissa Gerke came in 324th in the girls' difficult course in 45:51. Conor Smith for the Comets was 202nd and also just missed earning a coveted ribbon with his time of 27:43.

Both Ilwaco and Naselle will compete again at?Wwahkiakum Thursday. There will be only one course and it will not include sand or mud unless it rains on all the runners. Those runners who happened to draw the moderate or extra spicy courses will be happy for that come Thursday.

Arizona DL coach Ricky Hunley on returning to UA, coaching philosophy and his time as a Wildcat