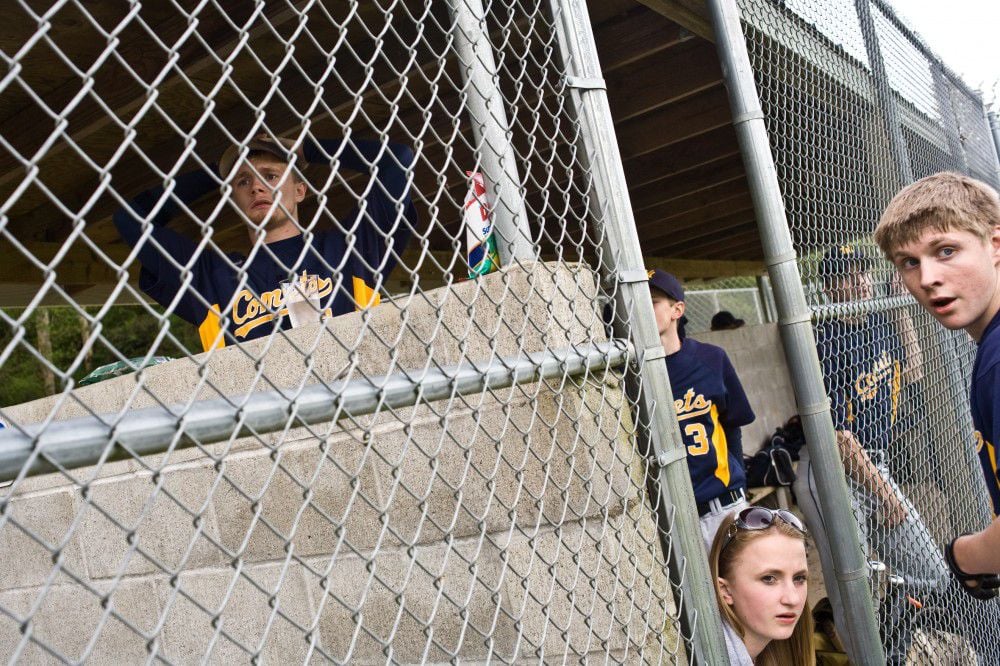 <p>Chris Walkowiak, left, reacts in disbelief as coach Pete Donlon argues an out called at the plate on Brendan Greenfield, right, in the first inning.</p> 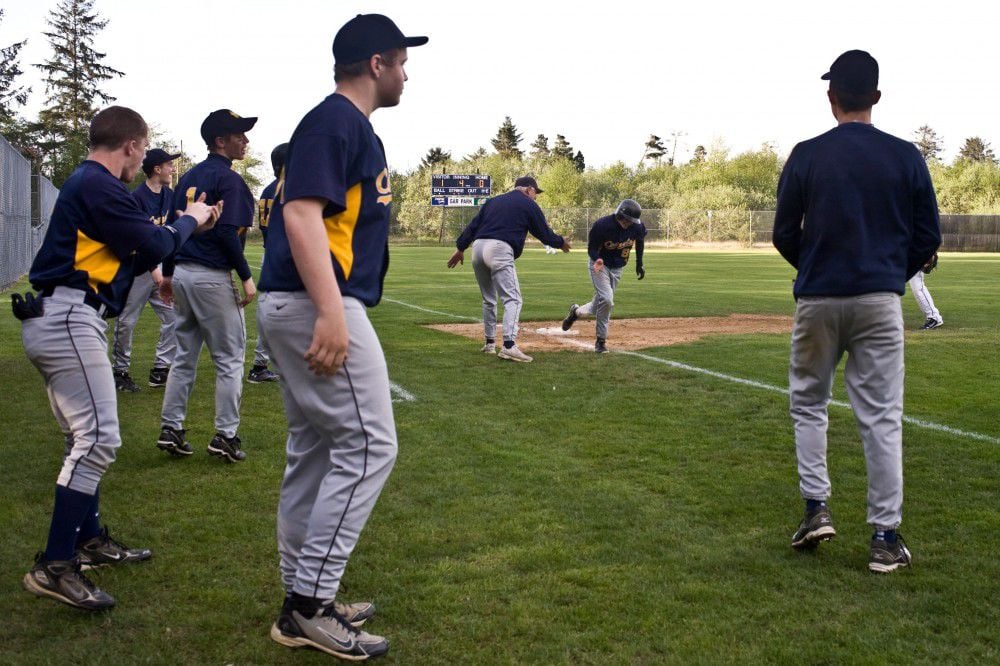 <p>Sam Scrabeck is greeted as he rounds third base after hitting a long home run over the centerfield wall Monday night.</p>

<p>Chris Walkowiak, left, reacts in disbelief as coach Pete Donlon argues an out called at the plate on Brendan Greenfield, right, in the first inning.</p>

<p>Sam Scrabeck is greeted as he rounds third base after hitting a long home run over the centerfield wall Monday night.</p>

WESTPORT  Nick Strange had a no-hitter going and had just struck out the first two hitters in the sixth inning of a tense a 1-1 tie in Naselles District IV opening game when disaster struck. A pair of walks, an error, and a hit batsmen followed by a double  the only hit Strange gave up all season  turned into a four-run inning and triggered Morton-White Pass to a 7-1 win at GAR Field in Westport May 7.

Nick was absolutely dominant on the mound. He was over-powering with his fastball and curve, but we couldnt get anything going offensively. The scouting report on their pitcher was that he threw a lot of curve balls, but he couldnt get it over and we hit the ball hard, but always it seemed to be right at them and they come close to making a mistake in the field. They are the best defensive team weve faced this year, coach Pete Donlon said.

The Comets had their best chance to break out on top when Brenden Greenfield hit the first pitch of the game for a screaming double to the base of the left field fence. Chris Walkowiak sacrificed him to third and Strange walked. Later in the inning the Comets attempted a double steal, but Greenfield was called out at the plate, even as the baseball apparently was jarred loose.

It was a bang-bang play, but the catcher dropped the ball. We didnt get the call. It would have been a lot easier to be playing with a lead. That was a key play and call, Donlon stated.

The Timberwolves plated an unearned run in the second to take a 1-0 lead. They scored when a hit batsman stole second and third and came around when an overthrow skipped into the third-base bullpen.

Sam Scrabeck belted a home run over the 360-foot mark in centerfield to tie the contest in the fourth inning. Umpire Mike Bloomberg smiled as Scrabeck ceremoniously jumped on third base with both feet on his tour of the bases. Six days earlier he had called Scrabeck out for allegedly missing the bag when he had smacked what would have been the game-winning home run at North Beach.

David Blaylock was the only other Naselle batter to have a hit, lining a single in the fifth inning. He also made an outstanding running catch in right field in the second inning. Jake Williams was exceptional at third base, making a superlative tag on a throw from Greenfield in centerfield, and fielding flawlessly a pair of bunts as MWP tried to play small-ball to advance base runners against the Comets.

Strange ended his six innings on the mound with his seventh strike out coming on a sidearm curve that buckled the Timberwolves batters knees. Ive been saving that pitch, he said.

We had all kinds of chances today, but now we have to come back and win three straight to get to state. I see where all three Pacific League teams lost today. Well have to beat Northwest Christian tomorrow and then win twice on Saturday, but the kids have won three straight before. If our pitchers continue to throw strikes, we will be fine, Donlon concluded.

Mossyrock shutout Napavine 6-0, Adna downed Ocosta 5-3, and Toutle Lake humbled Northwest Christian 12-1 in other opening round district action. Should the Comets defeat NWC Tuesday they will play the loser of the Toutle Lake-Adna game this Saturday in Mossyrock at 10 a.m. and then would have to win one more game at 2 p.m. to earn the final state berth.

OYEHUT  It took Naselle an extra inning to win their first Pacific 2B League championship since 1999, but the extra frame was a productive one as the Comets exploded for six runs to defeat North Beach 9-4 there May 1. Naselle actually had the game won in the top of the seventh when Sam Scrabeck blasted a 380-foot home run over the left field fence. Scrabeck was called out when the umpire felt he missed third base; negating what would have been the winning run.

The umpire was looking at me like he was going to have to make the call, but I couldnt get Sam back to third in time to avoid the appeal. It was my fault, coach Pete Donlon explained. Then we score six runs in the top of the eighth and only one ball was hit out of the infield, but I guess thats baseball.

Scrabeck disagreed. I am sure I touched third base, but the ump called me out. The main thing is that we won and are league champs, which was one of our goals. My control was a little off because it was cold and rainy and the mound was weird.

Naselle scored all of their runs in the even-numbered innings, getting one in each of the second, fourth and sixth frames and six in the eighth. After two strikeouts in the second, Jake Williams and Brenden Greenfield walked, both stole and Chris Walkowiak lined a single to left to score Williams. In the fourth and sixth innings, David Blaylock reached on walks and then stole second. In the fourth, Greenfield drove him home with a base hit and in the sixth a sharp single to center by Williams scored Blaylock.

In the eighth, Paul de Montaudouin walked, Calvin Zimmerman was hit by a pitch, and both stole a base. Blaylock beat out a suicide squeeze bunt perfectly placed according to Donlon, driving in de Montaudouin. With two outs, Nick Strange popped a fly ball near the mound. Nick must have hit it 300 feet high, Donlon joked. The pitcher circled it a couple of times and then dropped it. It would be North Beachs only error and it made the score 5-3 in favor of Naselle. Scrabeck and de Montaudouin walked with the bases loaded and then Trevin Leeland lined a long single down the left field line to knock in two more runs before the Hyaks got the final out.

It is nice to win the league for the first time in awhile. The mound was sloppy and it was a challenge to pitch, but we overcame that to get the win. I was mad at first that I had popped up in the eighth inning, but then I saw the pitcher going back and forth and I sprinted to first, Strange said.

Scrabeck pitched the first four innings and Strange tossed the final four. The pair of sophomore right-handers gave up a total of only four hits in eight innings. Naselle pitchers uncharacteristically gave up 11 walks, but the Comets hitters walked 14 times during the soggy contest. Both teams stranded 11 base runners.

North Beach is now 3-6 in league play with one game to go and they are the only Pacific League team not to qualify for the 2B district tournament. The Comets were to open the double-elimination District IV tournament against Morton-White Pass, the Central Leagues number four seed.

The Comets finished the league season with an 8-2 mark.

WATCH NOW: Scott Frost says Huskers prepared to play this fall 'matter what that looks like'