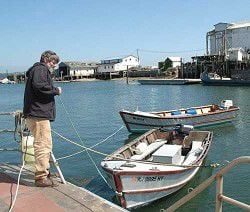 Kemmer inspects one of the two wooden boats he completed this past spring. He built both working vessels in his garage near Oysterville. Photos by KEVIN HEIMBIGNER/Chinook Observer 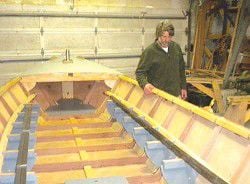 Brian Kemmer examines details of the internal boatwright work on a project he recently completed in his garage.

Kemmer inspects one of the two wooden boats he completed this past spring. He built both working vessels in his garage near Oysterville. Photos by KEVIN HEIMBIGNER/Chinook Observer

Brian Kemmer examines details of the internal boatwright work on a project he recently completed in his garage.

Locally built wood boats used to be the norm, but now most everything is aluminum, designed by computer and built in a factory

NAHCOTTA - Brian Kemmer has always had an appreciation for making things from wood. "When other kids would be out playing baseball I'd be building a bird house, anything; as long as I was working with wood."

The ultimate project for Kemmer has been to make a wooden boat and now four decades later Kemmer has created not one, but two wooden boats that took "about 250 hours each" to build. "One is 16 and a half feet long and six feet, three inches across and draws about five inches of water. The other is a foot shorter and both are a semi-dory design," he explains.

Kemmer's boats were built out of an old growth fir that was from a 90-foot log that was brought by dredge to a place in Grays River in 1987 and then left to dry for five years. He also used yellow cedar in his crafts. "The hardest part of building the boats was getting the jigs just right to stretch the wood for the frame. It seemed like I was forever making adjustments." Kemmer used steam from a crab cooker to help shape the longitudinal pieces and did the work in his garage near Oysterville.

Kemmer grew up on the north end of the Peninsula and graduated from Ilwaco High School in 1975, playing football and wrestling for the Fishermen. "I went off to college for a few years and then came back to farm oysters and have been doing that ever since," he relates.

"My dad (Bob Kemmer) was always reconstructing and repairing wooden things for on the water and I helped him even when I was small. I also learned a lot from Jim House who worked for Gertula's Boat Works in Ilwaco."

He says, "The last good wood guy is Earl Soule. Whenever I had a question I'd give him a phone call and he was always there right away with help." After Kemmer stretched the frames he then sheeted his boats, fiberglassed them, and painted them with oil-based paint.

"I might build more boats when I have some spare time, maybe next winter." Building wood boats used to be the norm, but now most everything is aluminum, designed by computer and built in a factory. "I'm not sure if anyone would be interested in learning how to build a wood boat or if they would have the patience," Kemmer says.

"I use one of the boats for my work and Warren Cowell has the other one and uses it in the (Willapa) Bay also. With the 50-horse Evinrude jet motor, this boat really flies," Kemmer says with a grin as he guns it outside the port. "I always wanted to build a boat myself, but never seemed to have the time. Now I've finally done it."

His two immaculate, functioning skiffs are as hard-working and solid as Brian Kemmer has been in the oyster industry, and they are made of his favorite building material-wood. "If I were to build another wood boat to sell, it would cost a fortune for all the time and materials I'd have to put into it," Kemmer relates.

The fact that he was able to complete his project of a lifetime, and they float, is priceless.

Bills fans welcome home team after loss to the Chiefs

Watch now: Packers fans and 2 Buccaneers’ fans gear up for the big game