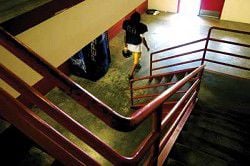 <I>Photos by DAMIAN MULINIX/Observer photojournalist</I><BR>During their time at Camp Rilea last week, football players from 14 northwest high schools, including Ilwaco, stayed in the soldiers' barracks while taking part in the football training camp. 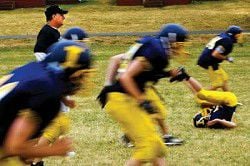 Coaches held early morning workouts to get players' blood pumping and ready for scrimmages throughout the day.

<I>Photos by DAMIAN MULINIX/Observer photojournalist</I><BR>During their time at Camp Rilea last week, football players from 14 northwest high schools, including Ilwaco, stayed in the soldiers' barracks while taking part in the football training camp.

Coaches held early morning workouts to get players' blood pumping and ready for scrimmages throughout the day.

CAMP RILEA - Ilwaco tied Lind-Ritzville at one touchdown apiece in their "Super Scrimmage" that culminated a week of wall-to-wall football for 32 Fishermen athletes and four coaches. Ilwaco scored on their third play of the mini-contest when Justin Short received a touchdown pass from David Sinor, a transfer student from Florida. The class 2B Broncos from Eastern Washington later knotted the score as each team ran 16 plays on offense and 16 on defense.

Coach Kevin McNulty said, "We moved the football pretty well on Lind-Ritzville, but missed a second scoring opportunity down close." He explained, "We improved throughout the week as a team and as individuals. We just need to be more consistent now."

Both a varsity and junior varsity Fishermen squad suited up for the four-day camp at the sprawling Army base just north of Seaside, Ore., where Army drills, including numerous rounds being discharged from the nearby firing range, could be heard. The varsity was fourth out of 14 teams in the seven-on-seven passing competition and the linemen set a new all-time camp record with the tire throw relay. "We faced many different types of teams during our many scrimmages," McNulty said. "The key thing will be how well what we learned in July at camp will transfer to our regular season. All things considered, I think this was an exciting camp for both the players and coaches alike."

Ilwaco fared well in the myriad of speed, endurance and strength competitions the camp features between scrimmages and chalk talks. Short won the squat max for backs and receivers and Stephen Hilton, who is bouncing back from a shoulder injury, was first in endurance bench press in the same classification. Cody Bliss blistered to the second fastest time in the 40-yard sprint and Ikaika Thomas was second in the linemen division of endurance bench press.

Thomas has been hobbled by a knee injury, but is hopeful to be ready for his senior season. Also coming off a knee injury was Rey Sanchez, who was second among backs and receivers in the professional agility test. Adam Bundy took third among the camp's linemen in the bench press max.

Earning an individual award is impressive as there were 14 teams and more than 500 athletes at Camp Rilea last week.

Joining McNulty were Fishermen coaches Gene Ford, Bob Enos and Mike Sinor. "Our first football practice will be Aug. 20 and the weight room is open every week night at 5 p.m. I encourage all Ilwaco athletes to take part."