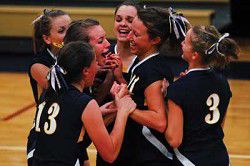 The Comets celebrate after winning the fourth game of a dramatic five-set match with Raymond Thursday.<br>DAMIAN?MULINIX/Chinook Observer

Cardiac Comets get Gulls in five

The Comets celebrate after winning the fourth game of a dramatic five-set match with Raymond Thursday.<br>DAMIAN?MULINIX/Chinook Observer

Cardiac Comets get Gulls in five

NASELLE - Two of the games went beyond the limit and in the end the lethal combination of Naselle's Orianne Condon digging the volleyball and passing, Shelby Leeland's setting and Emily Green spiking it home for a kill did in Raymond 3-2 in a non-league volleyball match at Lyle Patterson Gymnasium Thursday.

The Lady Gulls took the first set 25-16 after bursting open a 14-14 tie with nine straight points, but ran into the Shelby to Green buzz-saw late to drop the second set in extra play 27-25. Game three it looked like neither team would be able to put away the win as it was tied 22-22 and each squad made two service errors to knot the score at 24-24. Green made a pair of sensational blocks to keep Naselle in the contest, but Raymond's McKenzy Miller served a pair of aces to eventually break a 28-28 tie and give the Seagulls a 2-1 edge in games.

In game four Green's three aces to finish out the fray at 25-16 and her two spikes, one on a Leeland assist to break open a 14-14 tie were the keys to forcing a game five. In the deciding game Naselle missed their only serve in the final two games (they were 40-41 from the line during the late going) and Miller's block gave the visitors a 2-0 edge. Leeland then served four consecutive points, two by ace and one came from Green's block to put the Comets up 4-2.

Raymond tied the contest on two of Miller's 12 aces at 7-7. A timely time out by Coach Kim Eaton froze Miller at the line, and she then smacked her next serve into the middle of the net to hand Naselle an 8-7 advantage. First Leeland had a kill, then Condon set up Nicole Tarabochia for one of her season-high nine kills in the match and the Comets fashioned a 12-8 advantage in the deciding game. Raymond battled back to within 13-10, but Condon to Leeland to Green for two resonating kills ended the game, set and match in favor of Naselle 15-10.

In the first game Naselle had fallen behind 6-0 and appeared to be non-plus when Jerrica Juarez came off the bench to serve a pair of aces and help bring her team to a 10-10 tie. "I was nervous at first, but it was amazing for us to come back and pull together to win the match," Juarez explained. The Seagulls, thanks to four aces from Hannah Rhodes and steady play inside, went on a 9-0 tear and took the initial set 25-16.

Green took over game two from the start with two kills, two blocks and an ace to help put Naselle up 9-3, but the Gulls battled back to tie 13-13. Tarabochia broke the tie with a kill and an ace from Leeland and an assist to Green put the Comets up 18-15. A pair of aces from Emma Fauver helped keep them ahead, but Raymond would eventually take a 23-22 advantage. Green's block and Leeland sets to Green and Tarabochia put the match away 27-25.

Game three was nip and tuck from the get go. The game was tied an amazing 16 times from 5-5 to 28-28. With the score 22-22 both teams missed serves twice and Green's two blocks at 25-all and 27-all saved the Comets from certain defeat. In the end two power-house service aces from Raymond's Miller turned the tide 30-28 in favor of the Seagulls.

In the fourth contest three kills from Green early and two from Tarabochia and two from Condon helped put Naselle on top 13-7. Raymond came back to within 14-13, but two sterling spikes by Green, an ace from Leeland, and three aces from Green knotted the match at 2-2 as Naselle took the fourth set 25-16. That victory set up Naselle's final triumph in game five and sparked the Comets to improving their record to 2-5 in non-league play.

Green said, "It will be nice to go over what we did well tonight in the locker room instead of being upset about what we messed up. This was a great team effort." Leeland added, "This feels great to win again. We pulled together as a team." The Comets snapped a five-match losing skid with the victory.

Naselle had 19 aces, led by Green's eight, Leeland's four and Juarez's two, while Miller lead Raymond with 12 as the Gulls knocked down 24 aces. The Comets had a season-high 37 kills to Raymond's 22 and were topped by Green's 23 and Tarabochia's 11. Leeland dished out 19 assists and Green and Condon each had seven digs to top the totals for the home team, followed by five saves from Tarabochia. Green was solid with six blocks and Leeland and Tarabochia each had two, while Miller had a half dozen for Raymond.

Naselle missed 19 serves in the first three games, but only one in the final two sets to end with 84 percent efficiency to Raymond's 85 percent from the line. Coach Kim Eaton said, "We focused on playing as a team in practice yesterday. We stressed taking responsibility to make the play yourself instead of expecting someone else to step up and we responded well tonight."

In C-squad play Naselle swept their match 25-17 and 25-21 behind the setting of Hannah Beatty and solid play of Susan Johnson according to Coach Rebekah Wirkkala. The JV team won 25-19, 25-22 and 15-3 with Nicolle Best and Taylor Wasmundt leading the way according to Rhiana Jacot. She also had special praise for the setting of Haleigh See.