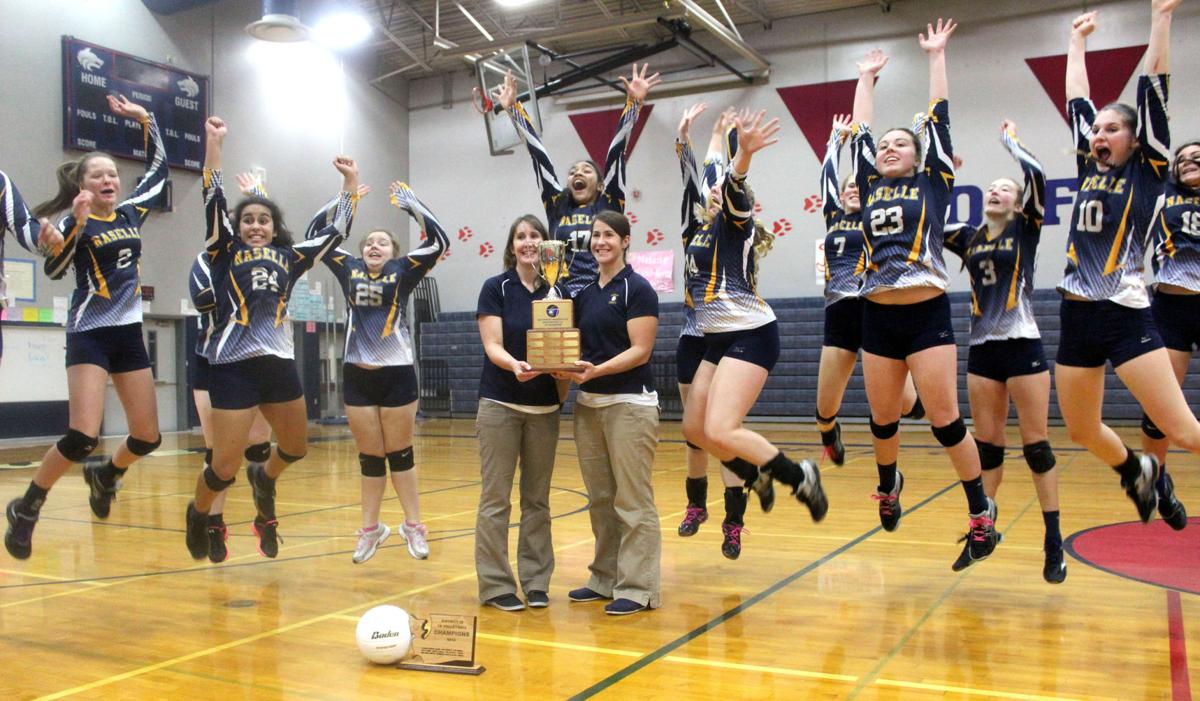 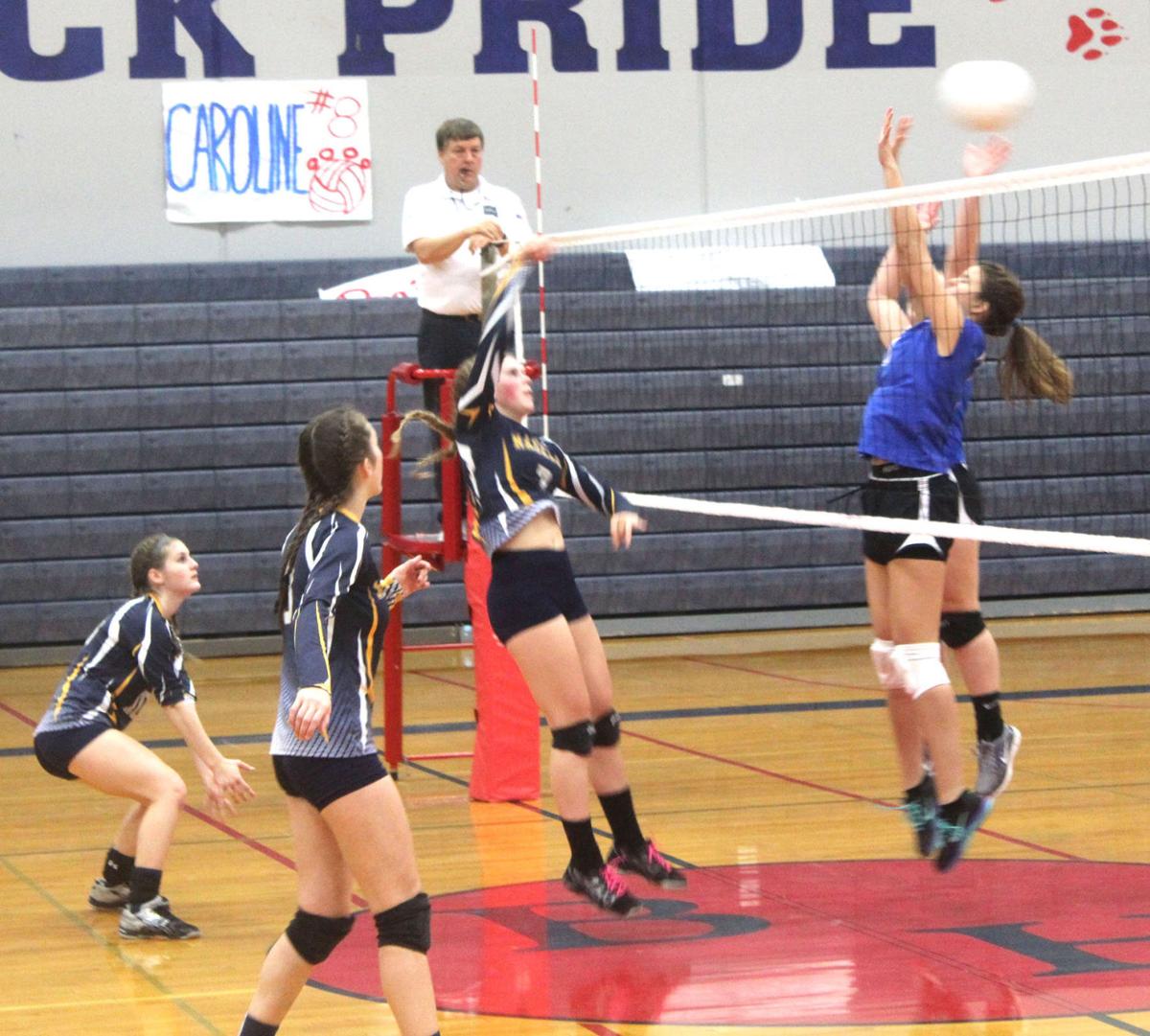 Naselle senior Kendra Eaton hits the ball over the net in action Saturday against Columbia Adventist. Pictured with her are junior Ellie Chapman, left, and senior Taylor Eaton. The Comets won in three sets to advance to the WIAA state championship. They went on to win in four sets over Three Rivers Christian School to earn the District IV championship trophy. 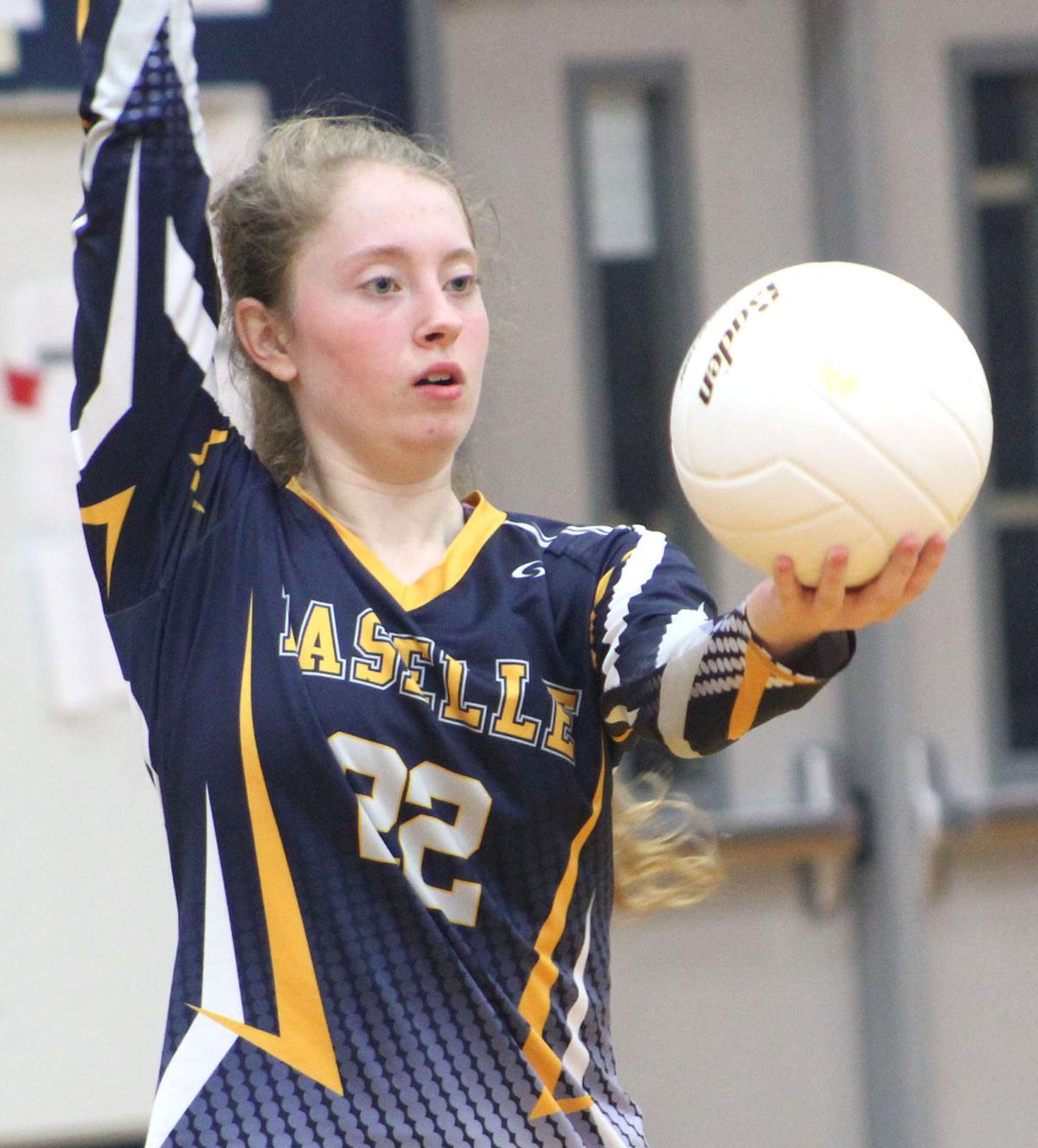 Junior Kyryn Jacot prepares to serve in action Saturday in Tumwater. Coach Kim Eaton commended her for serving and receiving serve in both games. 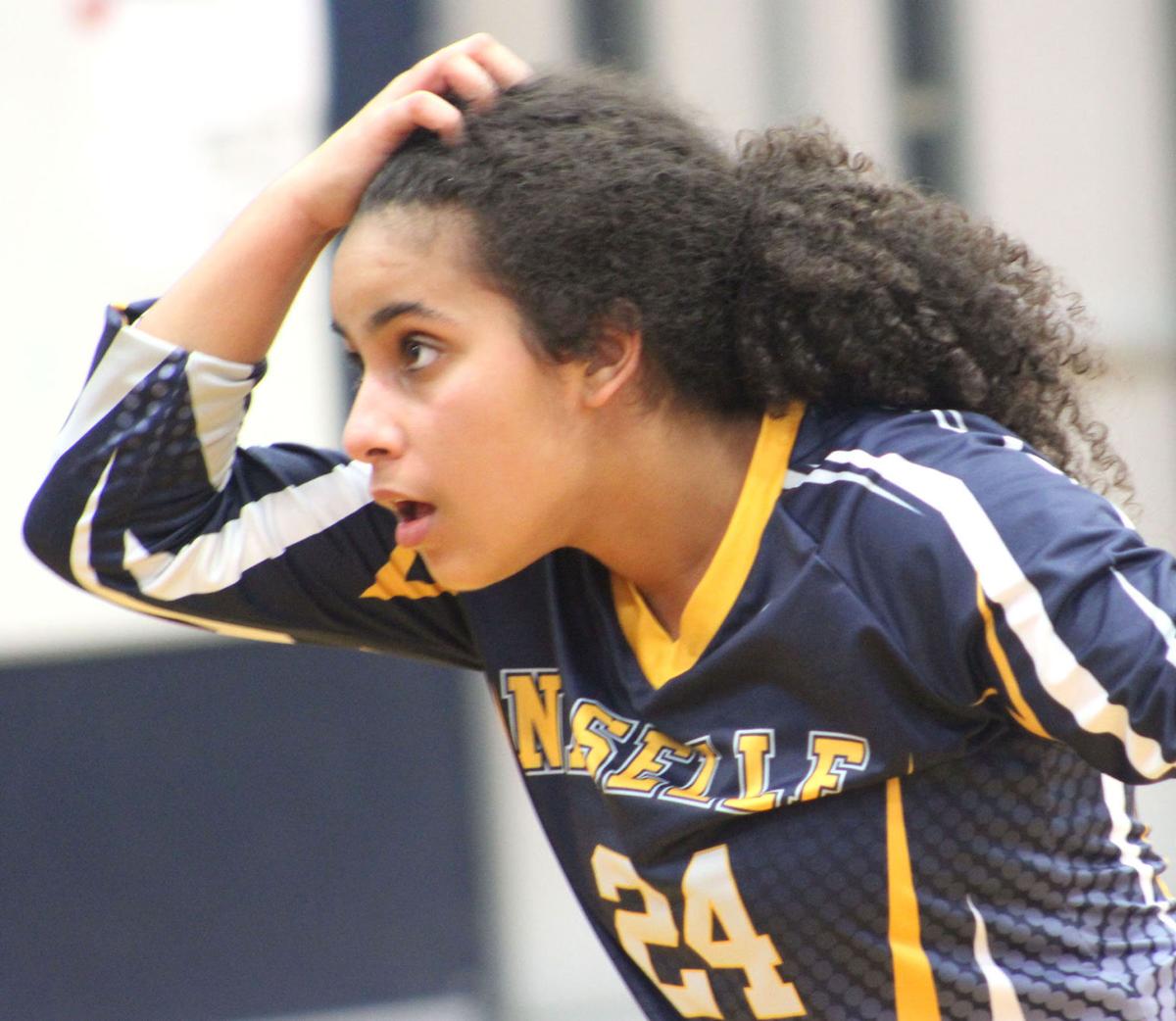 Junior Raja Estes came off the bench and helped fill Tayler Ford's role when Ford was injured during the District IV championships in Tumwater Saturday. 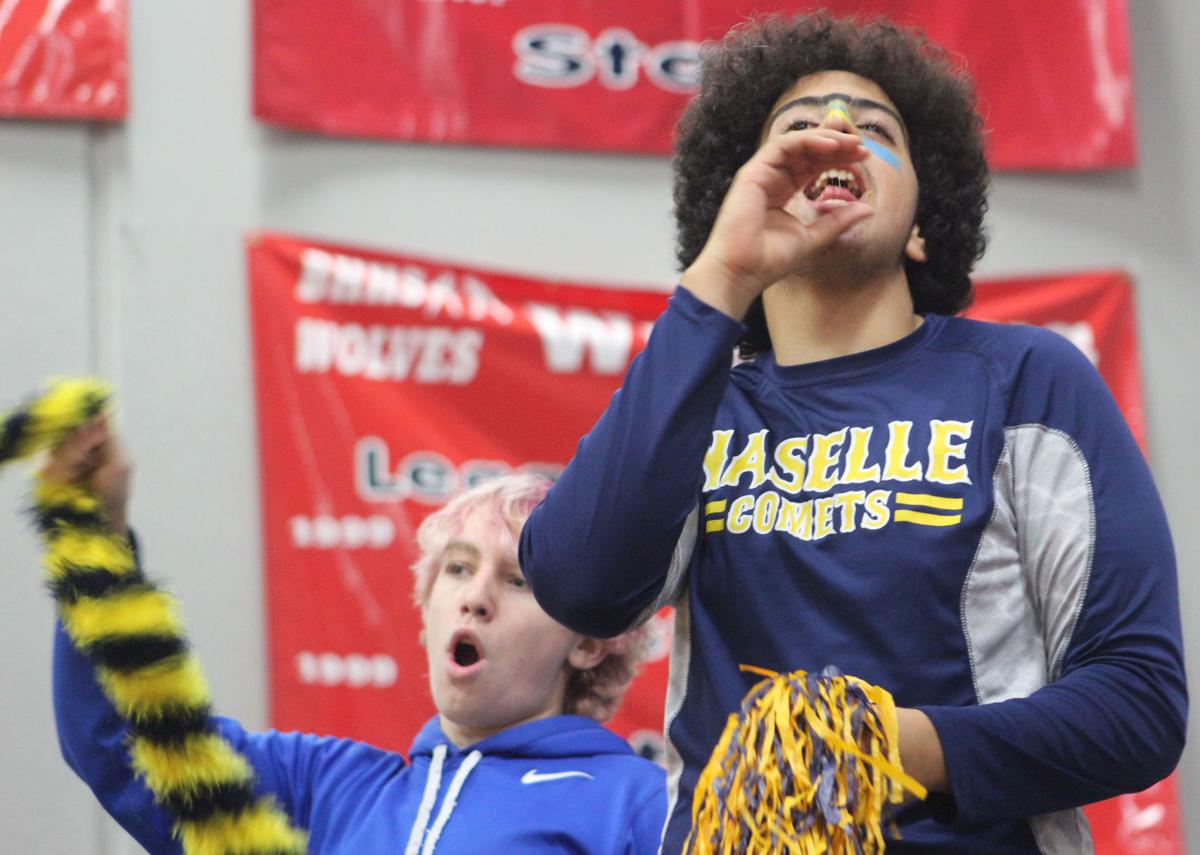 Naselle senior Kendra Eaton hits the ball over the net in action Saturday against Columbia Adventist. Pictured with her are junior Ellie Chapman, left, and senior Taylor Eaton. The Comets won in three sets to advance to the WIAA state championship. They went on to win in four sets over Three Rivers Christian School to earn the District IV championship trophy.

Junior Kyryn Jacot prepares to serve in action Saturday in Tumwater. Coach Kim Eaton commended her for serving and receiving serve in both games.

Junior Raja Estes came off the bench and helped fill Tayler Ford's role when Ford was injured during the District IV championships in Tumwater Saturday.

The Comets were seeking a place at the WIAA state volleyball championships.

You could feel it: Naselle’s crowning moment was just seconds away.

And who should step up but the Homecoming Queen.

No tiara today. Emma Fauver was clad in the blue and gold colors she has worn with pride since seventh grade.

She took no more time than usual. As she has practiced a million times in the Lyle Patterson Gym, she tossed the ball up and served it cleanly.

Again, she took the ball and walloped it with vigor.

It soared over the net. It did not come back.

Saturday night fever hit Tumwater. Grandmothers were on their feet, dancing like teenagers; boys were waving blue and gold scarves and whooping.

Naselle was going to state for the second consecutive year; once again, an individual had done her part.

“I was just happy to get it for my team,” said Fauver, when asked about her composure and technique. “We do a lot of it in practice.” And when her second serve was not returned? “I was so excited!” she added, before being engulfed by family hugs.

There was more applause to follow for the NHS senior and her teammates,

Naselle had just beaten Columbia Adventist 25-13, 25-15, 27-25, guaranteeing a spot in the state championships in Yakima Friday. But the Comets had one more game to play in the gym at Black Hills High School — and no time to rest.

It was not at all anticlimactic. They won. It took four sets, but at 9:40 when the defeated Three Rivers Christian School team was southbound on Interstate-5, the Naselle girls were goofing it up for photos around a gleaming trophy — officially the best team in District IV.

But the wins came at a price. Junior Tayler Ford, one of Naselle’s six starters, injured her ankle. She had to be helped from the gymnasium while her teammates fought to concentrate on the next point against the Adventist school.

Kendra Leeland commended her teammates for keeping their focus.

Coach Kim Eaton praised Leeland after the first victory for her individual play and leadership, directing the action.

In the first game, she made 12 kills and served four aces. In the championship game, she was in similar form with 12 kills, eight digs and three aces.

“Kendra really just led the court in such a calm and collected manner,” she said. “She focused on what she needed to accomplish. She’s an amazing player — she’s led the team in every aspect on the floor.”

Coach Eaton covered Ford’s duties with Fauver, junior Raja Estes and freshman Taylor Gudmundsen, who was called up to varsity for Thursday’s three-set home win against Pope John Paul II High School. “They each did a great job when it was needed.” Estes played with intensity and Gudmundsen’s height helped at the net, setting and blocking. She made two unreturnable plays in the championship game.

The coach commended junior Kyryn Jacot for her serving, defense and serve-receive, which translated into five digs, three kills and five aces in the second win.

Co-captain Taylor Eaton had 28 assists in the championship game, making three kills, nine digs and serving two aces. She made 20 assists in the first contest.

““This is what the girls have been working for from a very young age,” she said, gesturing toward the district trophy. “They came in for their freshman year, even before that, in seventh and eighth grade, and have absorbed everything that has been taught to them.

“It’s a team effort, but these three have worked their butts off. They are leaving their legacy for the younger ones — to see what it takes to be successful. They are just drenched in sweat after a game, and even practice.”

Taylor Eaton was already looking forward to seeing the championship bracket to see who Naselle will play Friday so the Comets could focus their practices. “We just had an ‘on’ night,” the co-captain said. “We were ‘on’ all evening. We’ve won this trophy working for a common goal.”

Chapman made 11 kills and four digs in the championship game to add to the seven kills and three aces she made against the Adventist team. Like the other veterans, she is mindful that they qualified for state last year then lost two three-set contests.

“We are going to be a lot more ready,” she said. “Last year, we didn’t know what to expect.”

As for her combination play with Eaton and Leeland, she grinned. “I have just played with them for so long and we know what the other’s going to do.”

Coach Eaton was mindful that a couple of squad members didn’t get any playing time in the two crucial games.

“The girls who were on the bench were clapping and helping the rest of the team,” she said. “No matter if you are on the floor or on the bench you have a role on this team. Tonight we’re celebrating all their success. The whole group of girls did it. We are just so incredibly proud of them.”

Thursday night in their home gym, NHS won in three sets over Pope John Paul II High School of Lacey, Wash., 25-11, 25-7, 25-18 in a performance which demonstrated their power serving and decisive kills.

Coach Eaton described the serving as “amazing,” noting her players served 24 aces and made only four serving errors.

Naselle was soon ahead thanks to dominant play at the back of the court and at the net by Leeland. Tutu’u made a good play to bring the score to 14-9 then immediately served an ace. The set was won with a kill by Leeland and a tip-over by Taylor Eaton.

Eaton served three consecutive aces to set the tone of the second set, Chapman made a kill for the fourth point and Eaton then served another ace. Ford had an ace and two clever plays where she tipped the ball over the net softly to win points. Freshman Hailey Weston served four aces to win the set.

The momentum continued in the third with Leeland dominating at the net and Chapman and Tutu’u adding kills. Footh made an impressive play to rescue the ball which Chapman successfully hit over the net and the Eagles could not return. Footh and Weston both combined well with Tutu’u for points, and a bad serve by the visitors sealed the final point for Naselle.