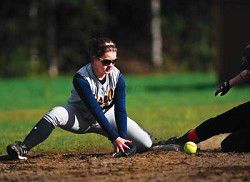 <I>DAMIAN?MULINIX/Chinook Observer</I><BR>On an attempted steal of third by a Wishkah Valley runner, Naselle third baseman Amber Wirkkala is unable to handle a throw late in the game. 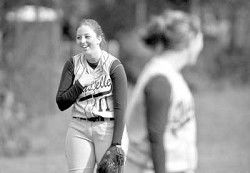 <I>DAMIAN?MULINIX/Chinook Observer</I><BR>On an attempted steal of third by a Wishkah Valley runner, Naselle third baseman Amber Wirkkala is unable to handle a throw late in the game.

WISHKAH - The Loggerettes came from five runs down to score the tying and winning tallies with two outs in the bottom of the seventh inning and claim a 11-10 Pacific 2B League softball victory over Naselle there Wednesday. The Comets had fashioned a 10-5 advantage in the top of the sixth, but Wishkah came roaring back for their first win of the season in the final two frames.

Orianne Condon started in the circle for the Comets and Naselle held a thin 4-2 lead during her four-inning stint as pitcher. Cassie Van Dusen came on in the fifth inning and Alexa York finished the contest, coming on to pitch in the sixth. Wishkah's leadoff hitter, Sheila Jones, had been held hitless until she smashed a double to center field to score two with two outs in the bottom of the fateful seventh. The Loggerettes had reached base on a hit batter and a walk.

Naselle opened scoring in the second on a base on balls, steal of second, and Van Dusen's RBI single. The Comets plated three in the third on a pair of bases on balls, Nicole Tarabochia's two-RBI double, and Rochelle Mahlur's single that scored Tarabochia. In the fifth Naselle added two more scores on an error, and singles from Mahlur, Condon and Van Dusen.

After Wishkah had come back to trail 6-5 in the fifth frame, the Comets touched home four times in the sixth. Two walks set up a two-RBI double by Haleigh See and then Tarabochia and Condon also had RBI singles later in the stanza. In Naselle's seventh inning they had a runner on third base with two down, but a line-out to the pitcher ended their rally.

The Comets' Tarabochia, Condon, Mahlur and Van Dusen each had two hits apiece and See and Cassie Bolton both added single safeties to the offensive effort. Eighth grader Teagan Louthan was the winning pitcher for Wishkah, walking six and striking out nine. Naselle pitchers struck out six, but walked 12, with nine of those free passes coming in the final two frames.

Mahlur homers OAKVILLE - Naselle scored a whopping 15 runs before Oakville even came to bat and Rochelle Mahlur slammed a three-run home run in the first frame as the Comets coasted to a 19-6 Pacific 2B League win there April 19.

Mahlur finished the game with three hits and five RBIs, but she was far from alone on the Naselle hit list. Haleigh See continues to scald the ball as she was 3-4 with two RBI and winning pitcher Cassie Van Dusen was also 3-4 with a pair of runs knocked home.

Makenzie Matthews and Carley Kitzman also had base hits for Naselle, who pounded out a season-high 19 safeties. Ciara Sandell proved to be an excellent leadoff hitter as she coaxed four bases on balls. Van Dusen struck out two in her four innings pitched.

Coach Bekah Wirkkala had praise for Baylee Clark at third base and for a strong throw while she was playing right field and for catchers See and Mahlur in the varsity game and Matthews in her first try behind the plate in the JV tilt. Wirkkala said Condon, Van Dusen, and Alexa York all pitched well at Oakville.

A junior varsity contest followed, but again the Lady Acorns proved to be no match as Naselle won 28-3. The Comets scored 28 runs on 16 hits and a compendium of walks, hit batsmen and Oakville errors. Van Dusen started in the circle and struck out two and Alexa York pitched the second inning as the game was called by mutual consent at that time.

Photos: Packers hold off Saints for 37-30 victory in New Orleans