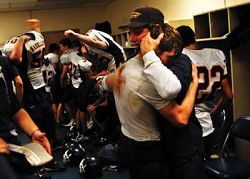 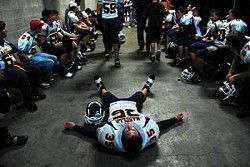 With the score tied 6-6 at halftime, a battle-weary Alan Erickson rests on the concrete floor of the Tacoma Dome. "The Tacoma Dome is hot! The heat really wears you out," said?Erickson after the game. "We were hydrating well, but it felt like we were playing in mid-August."

With the score tied 6-6 at halftime, a battle-weary Alan Erickson rests on the concrete floor of the Tacoma Dome. "The Tacoma Dome is hot! The heat really wears you out," said?Erickson after the game. "We were hydrating well, but it felt like we were playing in mid-August."

TACOMA - It began with a chorus of "Happy Birthday" on Halloween night. Three league wins and two state playoff revenge victories later the music became progressively vociferous and sweet as Naselle fashioned a lyrical run to the state semi-finals in the Tacoma Dome. And then on Friday against a hard-hitting and opportunistic Napavine team the music stopped.

The Tigers took advantage of great field position from the opening kickoff and used their size, the speed of Micah Brown, and a balanced running attack to pull away in the second half for an 18-13 victory, ending the Comets season and earning Napavine a state championship encounter with Asotin of eastern Washington.

The game was tied 6-6 at the half, but a 50-yard kickoff return to open the third period led to an easy score for the Tigers and one of two passes they intercepted gave them the football at midfield and set up the game-winning drive culminating in an 18-6 lead at the 11:06 mark of the final frame.

Assistant coach Clyde Glick said, "The ball bounced their way today." His statement was never truer than the game's opening kickoff when three Comets had their hands on the football, but couldn't control it until they pounced on it at their 11-yard line. Naselle then proved why they deserved to be in the Final Four of 2B teams as they put together a 14-play, 79-yard drive, only to lose the pigskin on their only fumble of the fray.

After a Napavine holding penalty, one of three they would be assessed, electric halfback Brown exposed his Achilles heel as he fumbled and Naselle's Mike Shirley recovered at the Tiger's 24 yard line. Alan Erickson carried three times for 11 tough yards up the middle, Tony Fletcher gained eight and Nick Hines four and then Austin Burkhalter called his own number as the quarterback snuck it in from one yard out to give Naselle a 6-0 advantage. Caleb Corona's kick hit the right upright and refused to go through with 54 seconds left in the first period.

A hook-and-ladder pass from Burkhalter to John Hines and the pitch to Nick Hines netted 37 yards and Naselle's ninth first down to six for the Tigers before the half, but three incomplete passes stopped the Comets shot at a go-ahead TD at the 26-yard line as time ran out.

To begin the second half Napavine transfer Matt Waltenberg scooped up Leal Mendoza's kickoff and raced 50 yards up the middle to Naselle's 33-yard line. Six plays later quarterback Marty Cozart scored from two yards out, but Fletcher stopped the PAT run to make the score 12-6 in favor of Napavine.

Another series of tricky bounces on the kickoff put Naselle back at their 22-yard line and after a first down Shirley was forced to punt. Jesus Martinez recovered the ball when the Tigers inadvertently touched it at the Napavine 40-yard line. On third-and-long the Comets tried a flea flicker pass, but Burkhalter's toss was picked off, ending the drive at midfield. From there three different backs for the Tigers each carried the football twice, with Waltenberg breaking the plane of the goal line from 13 yards out with 11:06 remaining in the final period.

In the next three minutes Napavine again intercepted a pass, but Fletcher recovered yet another Brown fumble. Hines zipped for 37 yards over the right side of Naselle's line on a counter, but the Comets turned the ball over on downs four plays later. The Tigers punted with 3:28 after three unsuccessful plays and Martinez returned it 20 yards to the Tigers 47. Hines 18-yard scamper and a 15-yard pass interference penalty set up Burkhalter's second one-yard TD of the game at the 34 second mark. Corona's kick made the tally 18-13.

Naselle's onside kickoff was long enough, but recovered by Napavine. Cozart took a knee three times to run out the clock and end the Comets season.

Coach Jeff Eaton said, "We never gave up, we showed a lot of character and we had the confidence to trust in each other. This is a great group of players and young men. Unfortunately we didn't cash in on our opportunities and they did."

"This game is still a blur and it's going to sting for awhile," said junior Alan Erickson in a postgame blog post on the Peninsula Friday Night Sights Football Blog (www.tinyurl.com/5m6csu). "We were hydrating well, but it felt like we were playing in mid-August."

The Comets average field position began at their 27 yard line eight times, while Napavine took possession on average at the 42 during their eight possessions. Naselle had 15 first downs to 13 for the Tigers and had 274 yards of total offense to 247 for the winners. The 120 yards of net field possession was the key to the contest for Napavine.

Nick Hines led Naselle with 86 yards rushing in 13 carries, caught four passes for 84 yards and completed one to his brother John Hines for three yards for 173 yards of total offense. Brown rambled for 111 yards in 11 carries. The Comets completed only six of 17 passes for 99 yards and Napavine was 2-6 for 14 yards, thanks to stellar coverage in the secondary by Fletcher, Mendoza, and Martinez.

Napavine's pair of 290 pound tackles and their overall team speed held the Comets to only 109 yards of total offense in the second half. Naselle punted three times for an average of 29 yards, while the Tigers kicked twice for an average of 39 yards. The Comets were flagged for three penalties and 15 yards and Napavine was assessed 45 yards on four flags.

"We can be proud of our achievements, but we are all full of emotion," said Erickson. "(The coaches) prepared us well every week and never gave up on us when we had a shaky start. We all love you guys!

"It stings to fall in the semis, especially when we had chances to come out on top. Our run to the playoffs was one of the best in school history and the playoff experience the most exciting ever!"

Eaton said, "We played our hearts out. I remember talking to these guys as seventh graders and telling them they could turn our football program around and they have. I'm so proud of each of them." Glick stated, "The further you go in the playoffs, the more it hurts to lose and I know this stings, but we went from a team to being a family as (Tommy Rose) said." Rose addressed his teammates by saying, "This is something I will never forget." Nick Hines then challenged the underclassmen, "If you play with the heart our coaches have shown us, you will go far."

Hines, Shirley, Fletcher, Corona, Rose, Stephen Griss, Nathaniel Finch, Marcus Sanchez, and Gabe See all played their final game for Naselle on the turf at the Tacoma Dome. Assistant Paul Wirkkala summed up the Comets' meteoric climb to success when he told the team, "The seniors won one game as freshmen, five the next year and barely missed the playoffs, and then finished in the quarterfinals and now in the semifinals. You guys have set the bar high for the program and made football fun again at Naselle."

So all songs must end and the Comets anthem is now history at 8-5, while Napavine improves to 11-2. But Naselle's best-ever football season in the playoff era is one to be savored for decades-like a classic tune.

Watch now: Reimer says Huskers have 'a lot left in the tank'