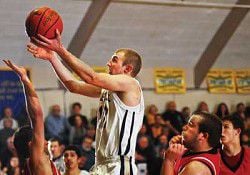 <I>Photos by DAMIAN?MULINIX/Chinook Observer</I><BR>Naselle's Austin Burkhalter drives to the hoop for a score in the fourth quarter of their game with Wahkiakum. Burkhalter led the Comets with 21 points and 10 rebounds in the win. 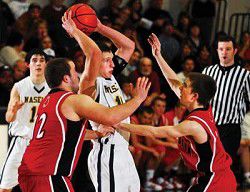 With the Mules defense scrambling in the second half, Naselle's Alan Erickson fights out of a double team.

<I>Photos by DAMIAN?MULINIX/Chinook Observer</I><BR>Naselle's Austin Burkhalter drives to the hoop for a score in the fourth quarter of their game with Wahkiakum. Burkhalter led the Comets with 21 points and 10 rebounds in the win.

With the Mules defense scrambling in the second half, Naselle's Alan Erickson fights out of a double team.

NASELLE - "When I saw (Cody Olsen's) shot hit the rim and bounce straight up I thought sure it was going to go in," Drew Macy said after he and his Comets teammates hung on to defeat Wahkiakum 65-62 in the Battle of K-M Mountain at Naselle Dec. 22. Olsen's miss of a three-point try with 4.8 seconds remaining and another Mule's desperation attempt of a trey at the buzzer both came tantalizingly close to forcing overtime, but instead left them booted from the ranks of the undefeated at 6-1 and with the Comets caressing the K-M trophy.

Naselle had exploded to a meteoric 21-7 lead to start the game, but the Mules battled back to within 40-35 at intermission and then the visitors closed the gap to 52-50 at the end of three frames. Both teams were tentative to start the last period, but with 5:18 left in the fourth quarter Wahkiakum cut the Naselle edge to 52-51. It was then that Ollie Baker came off the disabled list to connect on a three-point shot, his first points this season, putting Naselle up 55-51.

Coach Brian Macy said, "Ollie's basket was huge for us. It's been quite awhile since Naselle has knocked off the number one team in the Central League and that's just what we did tonight." Austin Burkhalter added three field goals in the final period including a trey and a driving left-handed layup to give the Comets a 63-54 advantage with 1:31 to play.

The Mules came charging back literally on an Olsen foul shot and a trey from stocky Tyson Bain, who finished with 21 points. With 40 seconds left Leo Mendoza stole a pass, but whiffed on the coast-to-coast layin as did Alan Erickson on the follow-up for Naselle. Wyatt Parker then scored for Wahkiakum on a break-away layup to close the gap to 63-60 with 32 ticks remaining, leaving fans from both sides of the standing-room-only crowd on their feet and hoarse.

Naselle converted on only two of five foul shots in the waning seconds, while the Mules kicked in two of four freebies to stay within one possession at 65-62. The Comets made a meager three of nine foul shots in the final stanza, but that was just enough to hold off Wahkiakum, who never tied or led in the K-M tilt.

Burkhalter led Naselle with 21 points and 10 rebounds and Macy added a career-high 16 with five assists. The key to the game was that Macy and Mendoza put the bit to the Mules leading scorer, Olsen, corralling him to four field goals in 14 tries (29 percent). "We played well defensively except for some lapses in the second period and Drew and Leo worked hard to slow down Olsen," coach Macy explained.

The Comets effectively broke the Wahkiakum full and half-court presses until the late going when they turned the basketball over six times in the last quarter. They made the extra pass offensively in the first half and shot a sterling 47 percent as a result before intermission. Manny Lopez's streak of seven straight double-doubles was snapped as he scored nine points and gathered in eight rebounds. Mendoza and Marcos Herrera added seven points each and Herrera blocked four Mules shots. Erickson scored two and Baker finished with three points.

Naselle won the battle of the boards 42-35, both teams had 14 turnovers and the Comets were whistled for 19 fouls to Wahkiakum's 16. Naselle netted five more field goals than the Mules, going 25-61 from the floor for 41 percent, but the home team was a meager 7-15 from the line for a sub-par 47 percent.

The Mules were 20-53 from the field for 37 percent, but their forearm-first style of offense yielded 26 trips to the charity stripe where they converted 16 times for 62 percent. "We beat a very good team tonight. Now we have to remember that we are a pretty good basketball team ourselves and keep playing with confidence," coach Macy concluded. Naselle is 6-2 on the year while Wahkiakum is 6-1.

The Mules won the C-squad contest 38-35 despite 10 points from Chandler Chapman and nine from Dustin Eaton for Naselle. Wahkiakum also won the junior varsity contest 52-39 as Rob Baker and Nick Zimmerman led the Comets with 10 points each and Nick Zimmerman added eight.