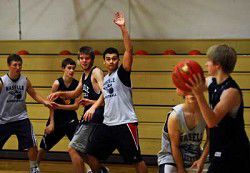 Cramer Smith, who will see action at center this year, tries to post-up one of the Comets leading guards, Ollie Baker, during a recent practice. 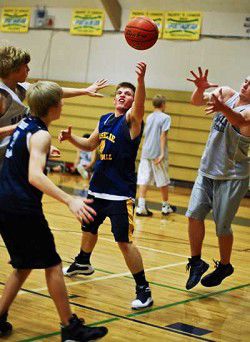 Look for Nick Zimmerman to provide hustle on the inside.

Cramer Smith, who will see action at center this year, tries to post-up one of the Comets leading guards, Ollie Baker, during a recent practice.

Look for Nick Zimmerman to provide hustle on the inside.

NASELLE - The Comets were 18-6 last year and have won the Pacific 2B League title each of the last three seasons, but after losing nine seniors they are in a rebuilding mode for coach Brian Macy in 2011. Gone are league MVP Austin Burkhalter, runner-up Manny Lopez and all-league point guard Drew Macy among the nine seniors.

The good news is that Naselle returns three sharp-shooting and very talented guards all in the six-foot height range and about half the student body is turning out for basketball. Coach Macy has 27 hopefuls working out in jam-packed Lyle Patterson Gymnasium.

"We know Leonel Mendoza and Ollie and Rob Baker will be very good at the guard position, but after that we have at least a dozen guys who could fill the other positions," Macy says. "At times we may have four or five guards on the court in our doughnut lineup; you know, with no center." Mendoza and Ollie Baker have three-point range and Rob was the junior varsity leading scorer and rebounder. All three can get to the hoop with slashing drives and they all defend exceptionally well and can rebound with the big boys. Mendoza, however, is still recovering from a knee injury suffered during the football season.

Chase Chapman showed unlimited shooting range last season and Chandler Chapman is also an accomplished guard who is in the mix for playing time. Freshman Nick Strange has performed well as has Dustin Eaton and Brenden Greenfield at the guard position in early practices.

Forwards include Andy Gonzales and Trevin Leeland who are excellent shooters, and Nick Zimmerman and Robert Eaton, who are long on competitiveness and hustle. At the center position Cramer Smith, Jesse Lopez and Ryley Queener show the most promise. Smith is coming off a tremendous cross country season and Lopez and Queener played well for the Comets football team. Macy is hoping that success will equate into basketball victories, as well.

"We want to play up-tempo on offense and have our pressure man-to-man defense also trigger some scoring. We'll likely run a motion offense, but may go inside depending upon who we have on the court at any one time," Macy states. "Defensively, we may have to mix in some zone if we don't match up with some of our opponents. Of course, we hope they will have some match-up problems with us."

Valley appears to be the favorite to supplant Naselle at the top of the Pacific, but Macy believes South Bend could be a contender, even after two starters defected to Napavine and the athletic Terrell Boyes is out for the season with a football knee injury.

"Northwest Christian always has a supply of exceptional athletes and North Beach is talented. Raymond is improved and we hope to be somewhere in the battle with those teams," Macy predicts. The Central League is loaded with PeEll being the defending state champion, but Napavine may be the league favorite even as the Trojans return with almost all of their title team. Adna, Wahkiakum, Mossyrock, Toutle Lake and Morton-White Pass are all state tourney caliber teams.

"Our district will be super-tough. We will just try to get better every practice and every game and at the end of the season we will see how we end up," Macy concludes. The last three seasons the Comets came within a game of a state tournament bid after being league champions. It is the hope this year that in an underdog role they can be the "upsetters" instead of the "upsettees" as four teams go to state regionals from District IV.

The Comets open at Ilwaco Nov. 30 and then travel to Wahkiakum Dec. 3. After facing their two rivals they host Montesano Dec. 7 and then begin league play against South Bend in Naselle Dec. 10.