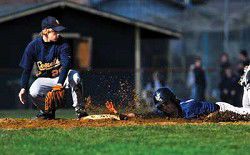 After a throw from the outfield gets by Naselle second baseman Larry Johnson, an NWC batter slides in safely on a double.<I><bR>DAMIAN?MULINIX/Chinook Observer</I> 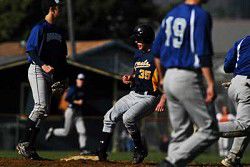 <I><bR>DAMIAN?MULINIX/Chinook Observer</I>Naselle's Alan Erickson was the lone Comet to get a hit off of NWC.

After a throw from the outfield gets by Naselle second baseman Larry Johnson, an NWC batter slides in safely on a double.<I><bR>DAMIAN?MULINIX/Chinook Observer</I>

<I><bR>DAMIAN?MULINIX/Chinook Observer</I>Naselle's Alan Erickson was the lone Comet to get a hit off of NWC.

NASELLE - Northwest Christian downed a short-handed Naselle nine 10-0 in the final Pacific 2B League game of the season for both squads Thursday. The Comets were without three starters and their projected starting pitcher against the defending state champions, yet "competed very well" according to Coach Pete Donlon.

NWC's ace pitcher Robbie Groeschell had a no-hitter going until Alan Erickson lined a hanging curve ball back up the middle in the fifth frame for Naselle's only hit of the day. Donlon said, "Trevin Leeland, Seth Scrabeck, and Chad Andring, who combined had pitched a total of two innings all season, hung in there, tried hard and pitched well. I am proud of them." The trio limited the Navigators to seven hits, but did hit five batsmen and walked eight, while striking out five.

Donlon had praise for Leo Mendoza at shortstop. "Leo made a couple of 'SportsCenter' plays with the bases loaded to keep us in the game. He caught a line drive up the middle, made a great backhand stop in the hole, and took away another base hit away with a catch over his shoulder in shallow left field."

Donlon also said Erickson in left field made two "great" running catches and that Kyle Mullins and Nate Carlson in the outfield and Larry Johnson at second base played well defensively. "Nick Zimmerman at catcher continues to improve," the coach concluded.

Naselle was one of only two teams who scored on the Navigators during the 10-game league season, but couldn't dent the plate against their ace. NWC had eight shutouts in the Pacific and squeezed home a run against the Comets with a 7-0 lead and stole another with a 9-0 advantage.

Naselle finishes 5-5 in the Pacific and is 7-6 for the year. They open District IV play May 11 at Centralia vs. Mossyrock.

Naselle stumbles in 7-3 loss, but secures district berth OCOSTA - The Wildcats scored all seven of their runs with two outs and only one of them was earned, but the result was a 7-3 win for Ocosta over Naselle there May 4. The Comets broke open a pitcher's dual between Ian Karnes and Leo Mendoza with a run in the bottom of the third inning as they were the designated home team, but three unearned runs in the seventh with the aid of just one hit sealed the deal for the Wildcats.

Despite the loss, Naselle has earned a spot in next week's district tournament as the Wildcats dropped a close decision to North Beach to eliminate them from post-season play as they now have six league losses.

Naselle broke into the scoring column in the third on base hits from Jesus Martinez, Chase Chapman and Chris Walkowiak's bunt single to load the sacks. Logan Scrabeck lashed a line drive hit to the outfield so hard that only one run could score. A line out to the first basemen "playing in shallow right field" and back-to-back strikeouts ended the rally according to Coach Pete Donlon. Three times in the fray Naselle would load the bases, only to be turned back on the other two occasions.

In the fifth frame trailing 4-1 the Comets walked twice around a Mendoza single and then Alan Erickson's double over the centerfielder's head plated two runs. Naselle ended up stranding both runners in that frame, however. The Wildcats had taken the 4-1 lead in the top of the fifth inning on a pair of walks and three of Naselle's five errors. Mendoza gave up one earned run in six and one-third innings of work, struck out seven, walked four, hit a batter, and allowed three hits.

Donlon lamented, "Their first three hitters were the only ones who got hits. We made all of our errors on their seven, eight, and nine batters and we walked them three times, so you might say we set the table for them. Leo pitched a great game and John Hines at shortstop made a fantastic play in the hole to throw out a runner and keep us close. We just didn't get the key hits when we needed them."

Chapman was 2-4 and Walkowiak, Scrabeck, Mendoza, Erickson with a double, and Martinez all smacked safeties for the Comets in the contest.

Quinault conquers Comets 7-1 despite strong Scrabeck stint QUINAULT - Logan Scrabeck allowed five hits in five frames, but a three-run Quinault home run in the sixth inning broke open a tight Pacific League game and gave the Elks a 7-1 win there Wednesday. The Comets only run came in the third inning when Jesus Martinez reached first on a walk, stole second and then third base and came home on a throwing error at third.

Leo Mendoza and Alan Erickson cracked the only Naselle hits of the game, both in the fourth inning. Coach Pete Donlon said, "Then Quinault made a very good play and a very fortunate one. Trevin Leeland smashed a shot at the first baseman, the ball accidentally deflected to the second baseman, who tagged Erickson out and then tossed to their pitcher covering first for a double play." One batter later Mendoza was left stranded at third when the Elks' centerfielder made an excellent running catch to end the threat with the score 2-1 at the time.