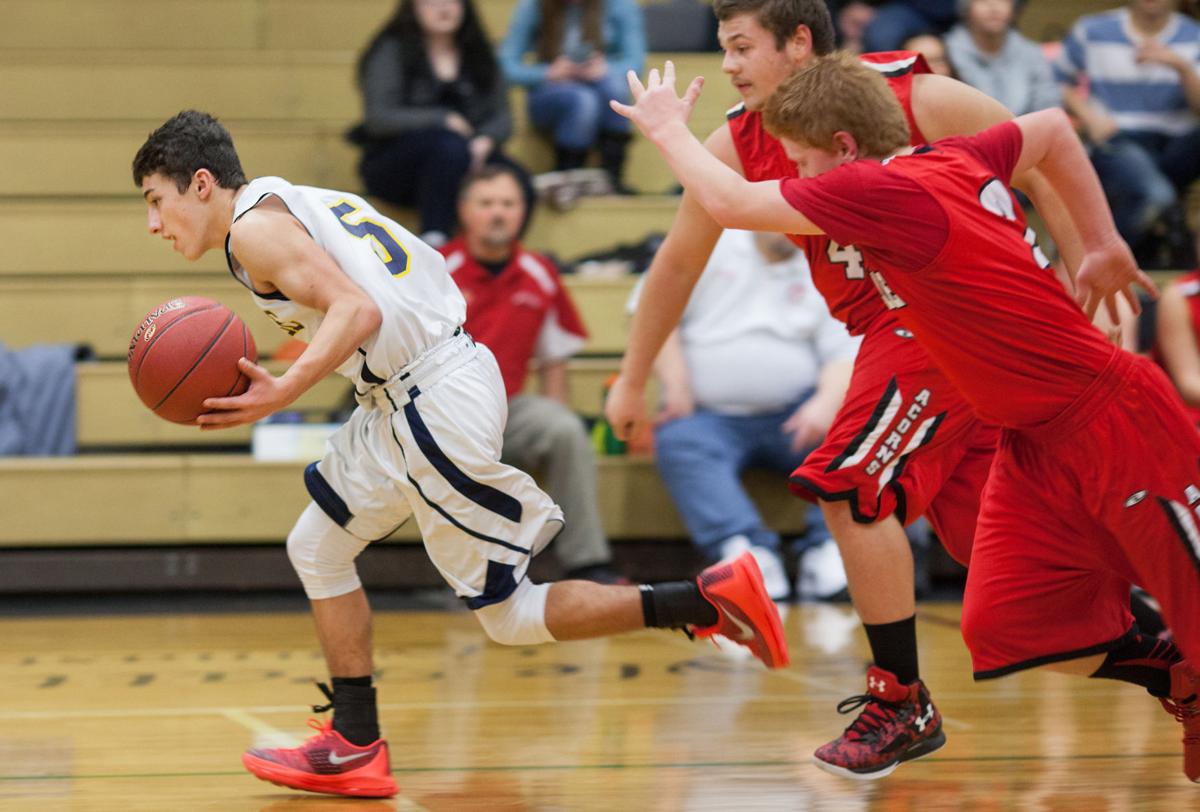 Naselle's Antonio Nolan took off down court after stealing the ball from Oakville. 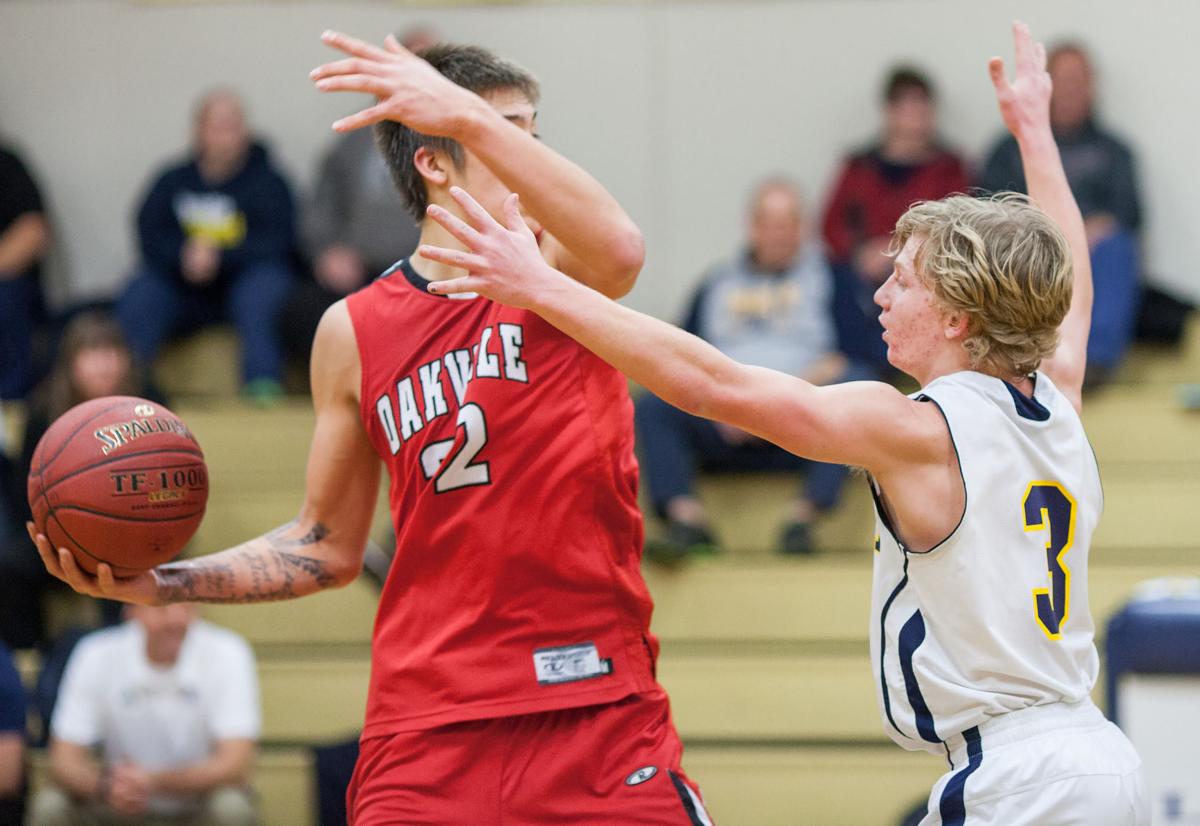 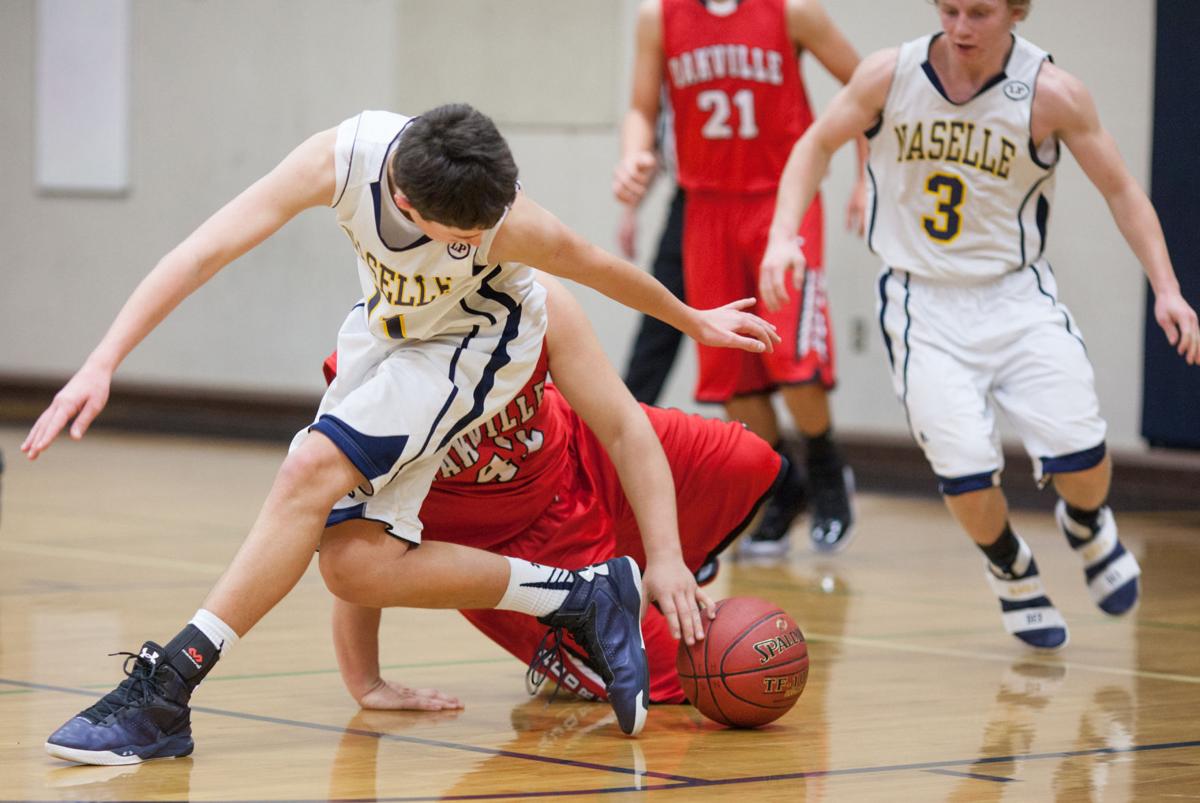 Naselle's Jacob Eaton made a quick spin after the knocking the ball out of the hands of Oakville's Roy Keller. 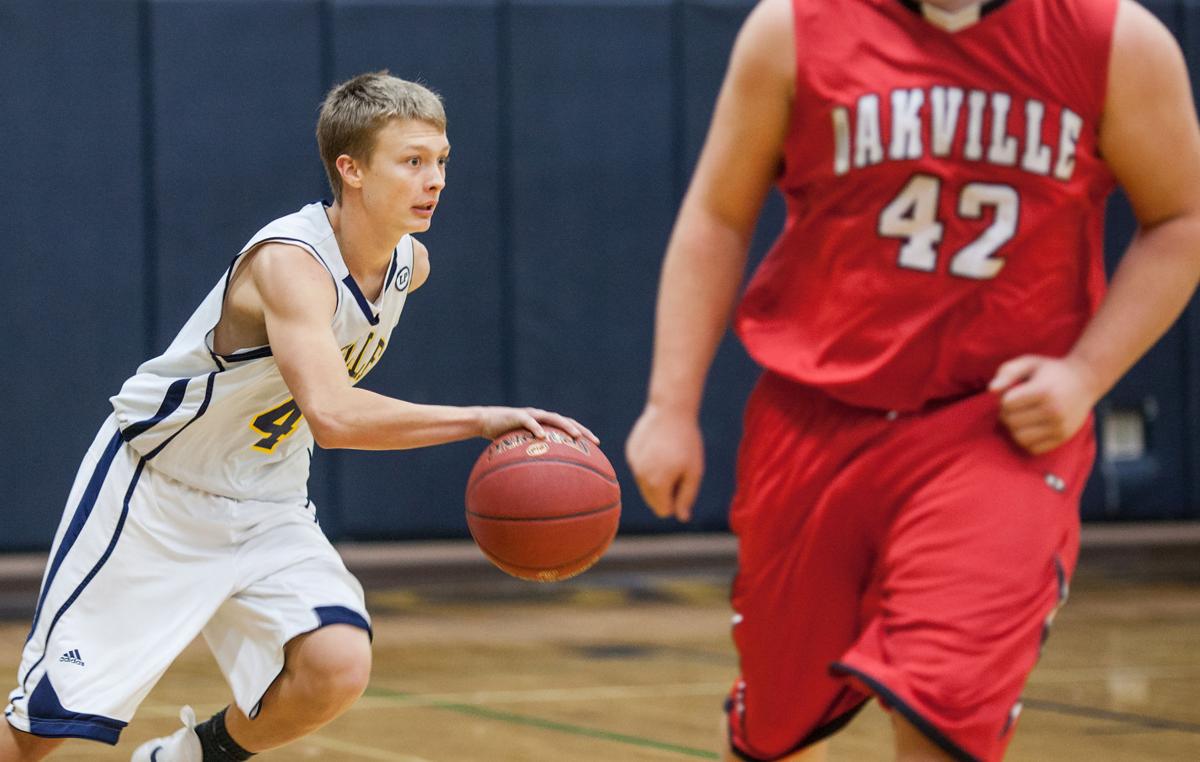 Naselle's Antonio Nolan took off down court after stealing the ball from Oakville.

Naselle's Jacob Eaton made a quick spin after the knocking the ball out of the hands of Oakville's Roy Keller.

NASELLE — The Comets took visiting Oakville out of its game early, and the Acorns never recovered in Naselle’s 80-32 victory on Jan. 23. The long outlet passes Oakville relies on turned into turnovers as Naselle defenders pressured Acorn passers effectively and denied them openings, and Oakville fell apart, committing 25 first-half turnovers.

The Comets placed the athletic but undersized Donny Edwards on 6’5” Devin Boyd, the defending Coastal League MVP. “He has a foot [in height] on me,” Edwards said. “I tried to stay physical, and keep him out of the paint.” Edwards leapt at Boyd to disrupt his passes while staying in front of Boyd when he tried to drive. Boyd played mostly on the perimeter, rarely forcing Edwards to guard him in the post. Boyd missed nine straight shots after banking in an early deep three-pointer. However, he finished with 21 of his team’s 32 points. Edwards himself missed seven straight first-quarter shots, and finished with 12.

Naselle led only 6-5 after Boyd’s long three, but the Comets outscored Oakville 17-1 the rest of the first quarter. Edwards’ steal and score 1:36 in started the spurt. The Acorns began forcing long passes, and the Comets pounced on their discombobulated opponent. A steal in the back-court led to a Jacob Eaton basket for a 16-6 lead, giving Eaton seven early points. Eaton helped Edwards trap Boyd into a travel. Antonio Nolan, left open, followed with a three-pointer for a 19-6 lead with two minutes remaining in the first.

The Comets kept piling on. Edwards hit a three-pointer after a Comet steal of an inbounds pass, giving Naselle a 30-10 early second-quarter lead. On an Oakville inbound play from the baseline, Nolan intercepted the pass and scored to make it 34-10.

Carson Bergeson entered the game, making his season debut after a knee injury at the end of football season. Bergeson quickly scored on a put-back, then stole another errant Oakville pass. Bergeson cut to the basket on an inbound play and scored for a 42-14 lead.

Corey Gregory banked in a three-pointer at the halftime buzzer for a 49-17 Comet lead.

Nolan led the Comets with 16 points. Eaton scored 11 of his 15 points in the first half. His seven of 11 shooting boosted the Comets as many teammates struggled from the field. Overall, the Comets shot just 43 percent, but winning the turnover battle 35-10 got them plenty of opportunities. Edwards and Gregory scored 12 points each.

NASELLE — Sophomore forward Jacob Eaton scored a career-high 21 points and grabbed 11 rebounds to lead the Comets to a 75-37 win over Mary M. Knight on Jan. 24. A 52-23 rebounding edge helped the Comets to the blowout win.

The Comets led 19-3 after one quarter, but the Owls showed stronger offense in the second. Knight’s Dylan Ralph cut it to 21-9 with a tough step-back three-pointer. Corey Gregory answered with a three for Naselle, but Ralph followed by banking in another one. Eaton got going late in the quarter, knocking down a midrange shot and a three-pointer, then getting down-court quickly for an easy bucket to help the Comets to a 44-19 halftime lead.

“I’m getting more comfortable playing in the post,” Eaton said. “This is my first year playing there.”

Eaton shot eight of 12 for his 21 points. Corey Gregory added 12 points. Ethan Lindstrom earned nine free throw attempts, making five, and scored nine points over all. Erik Lund had 12 rebounds for Naselle. For Knight Quentin Narrance scored 17 points, and Ralph scored all nine of his points in the second quarter.

NASELLE — The Comets demolished Wishkah 75-22 on Jan. 28. Donny Edwards scored 17 first-half points in about eight minutes of playing time, leading a starting unit that lit up the scoreboard while it was on the floor.

A Corey Gregory three-pointer made it 7-0 just 45 seconds into the game. Gregory got a steal, drew a foul, and hit his first free throw; Eaton then put back Gregory’s second free throw for a 14-0 lead with 6:08 remaining in the first quarter. Edwards then scored five straight points. It was 19-0 when the starters came out about four minutes into the game, and 27-3 after one quarter.

The starters came back to start the second, and did almost anything they wanted on both ends. Eaton crossed the court along the baseline, came open and hit a three-pointer. Erik Lund did the same. Antonio Nolan had steals on three straight possessions to create fast-break layups. It was 45-5 when the starters left again with over four minutes to go in the half.

Edwards finished with 19 points on nine of 12 shooting. Parker Dalton scored nine of his 11 points in the fourth quarter. Gregory and Oggie Lopez each scored nine. Eaton scored all seven of his points in his eight first-half minutes, just missing his fourth straight double-digit scoring game in a breakout week.

After games at Oakville and Lake Quinault, second-place Naselle (8-1 at press time) will close out the season against first-place Taholah (9-0) on Saturday, Feb. 4. The Comets will seek to avenge a 31-point loss to Taholah on Jan. 17.