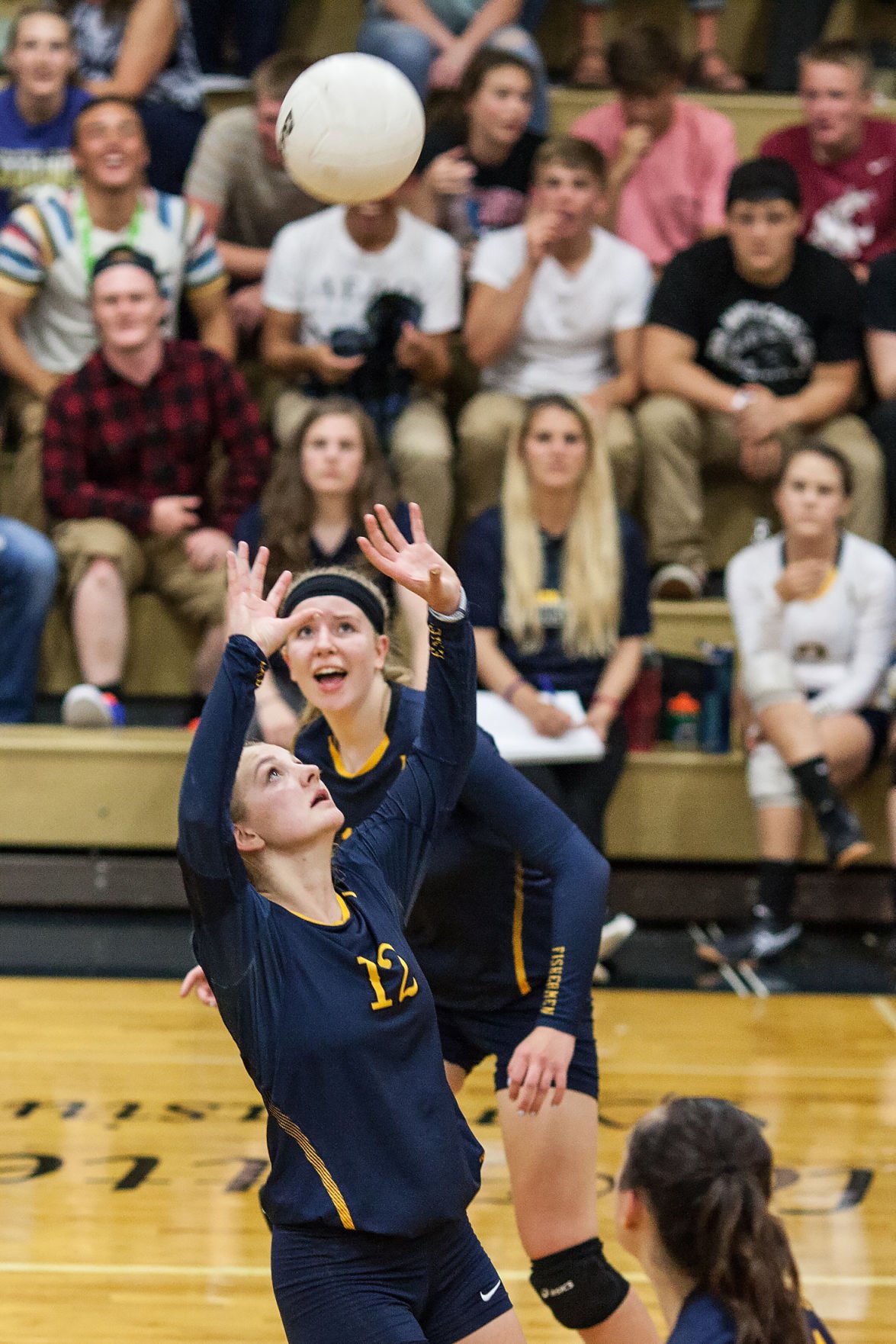 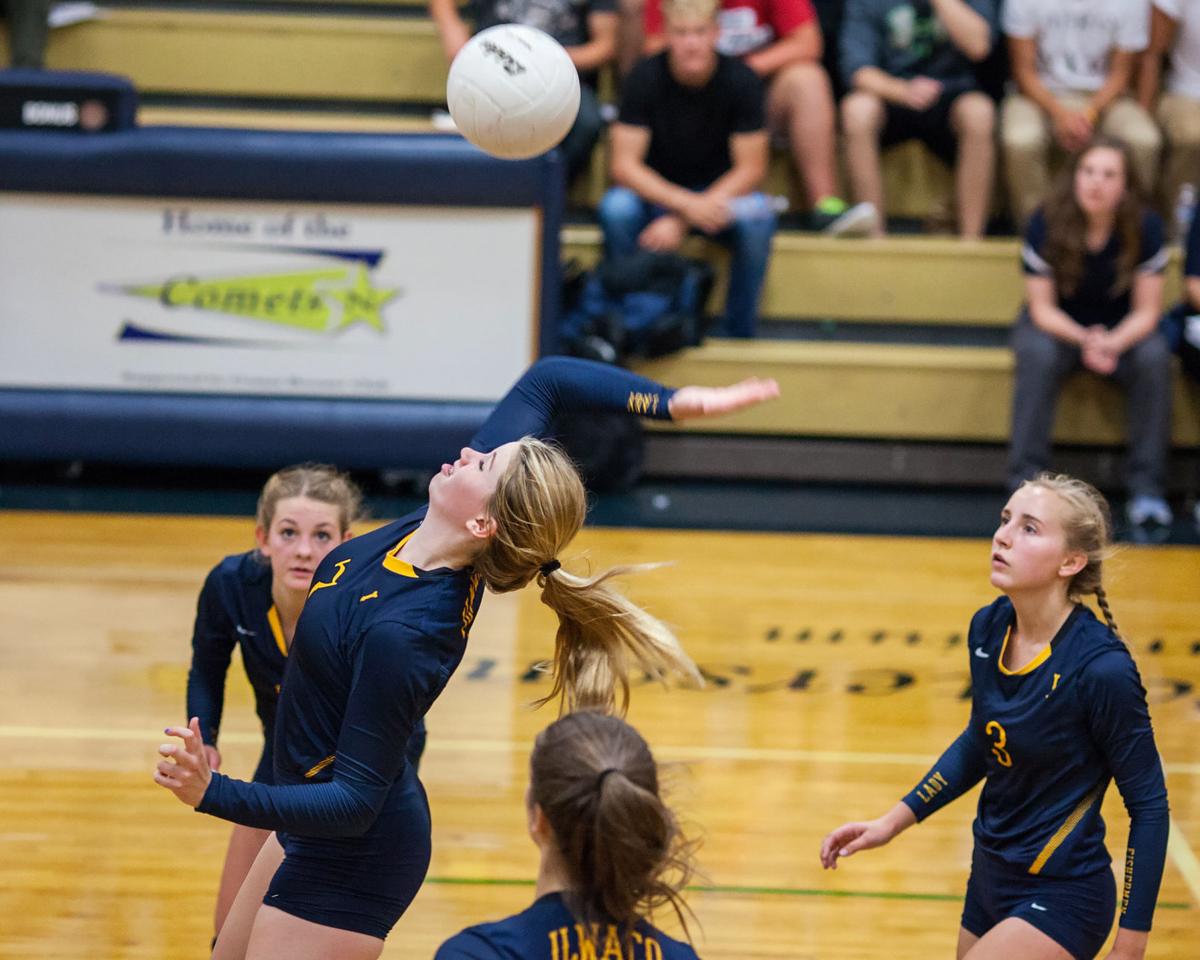 Ilwaco's Zoey Warner goes up for a spike during the Lady Fishermen's season-opening match with Naselle. 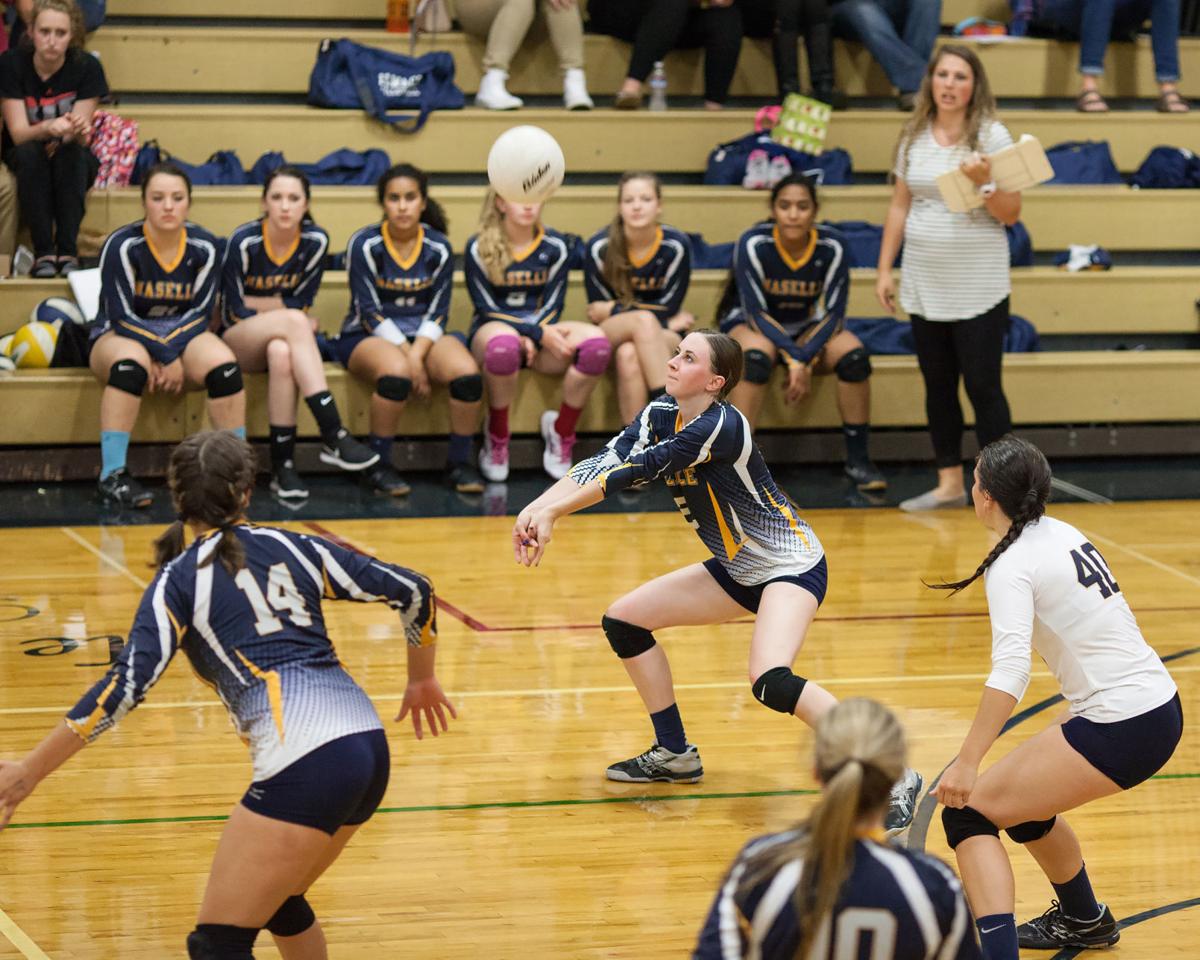 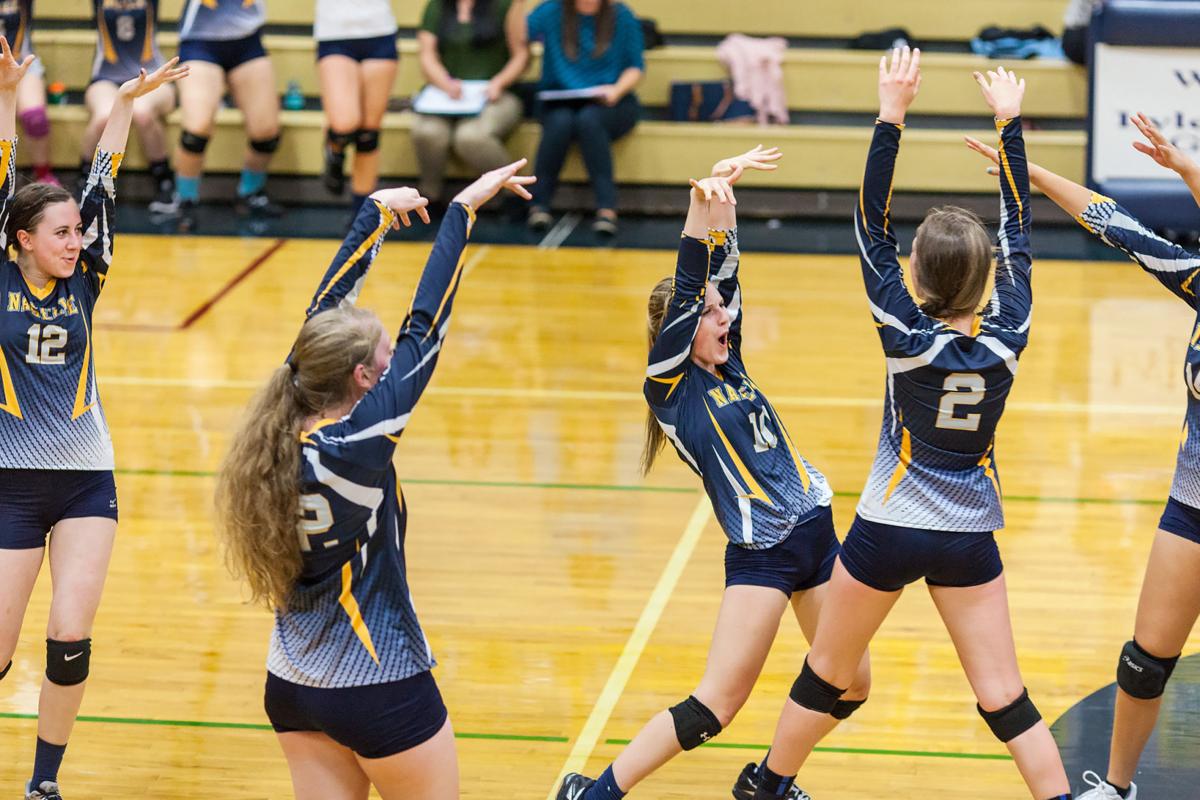 The Naselle Comets volleyball team celebrates a point during their season-opening victory over Ilwaco. 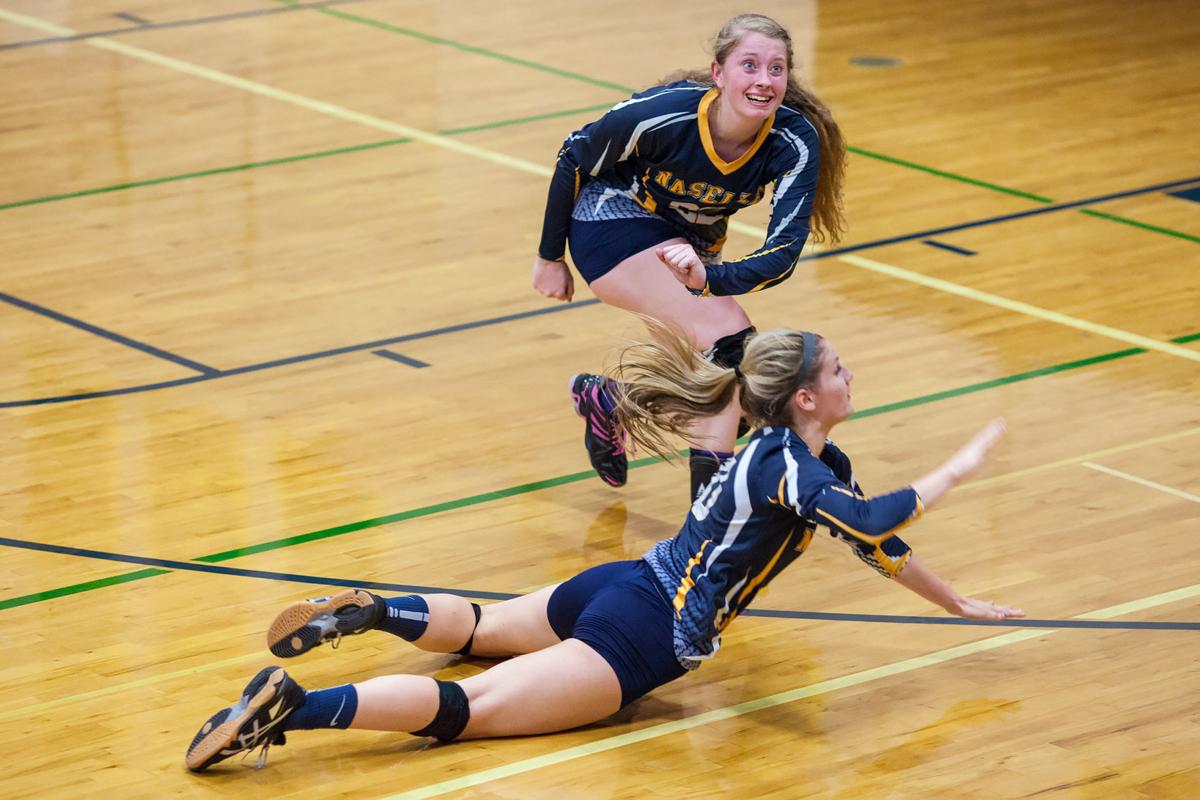 Naselle's Kyryn Jacot and Ellie Chapman try to save a ball near the line during the season opener.

Ilwaco's Zoey Warner goes up for a spike during the Lady Fishermen's season-opening match with Naselle.

The Naselle Comets volleyball team celebrates a point during their season-opening victory over Ilwaco.

Naselle's Kyryn Jacot and Ellie Chapman try to save a ball near the line during the season opener.

NASELLE — The Comets beat Ilwaco in four sets in the volleyball opener for both teams on Tuesday, Sept. 6. The Fishermen took the first set of the season, but Naselle recovered to win the next three.

Kyryn Jacot quickly turned things around for Naselle in the second set, with a kill for the opening point. Ellie Chapman dived for a dig, leading to a powerful kill by Amelia Tutu’u for a 2-0 lead. Two more spikes from Tutu’u helped Naselle to a 7-2 lead. Naselle setter Taylor Gudmundsen set up Chapman for some leaping kills, and Tayler Ford for some well-placed kills. Ford served four straight aces at one point. When Ilwaco returned her next serve, Holly Disch put it right back over the net for a kill. Zoey Warner served three straight aces for Ilwaco, cutting the lead to 18-9, but Naselle won the set 25-12.

In the third set, Tutu’u started the scoring with a powerful block. Chapman then served five straight aces. With the Comets ahead 11-4, Gudmundsen set it to the back row for Ford, who hit it in an open area for a kill. Shortly afterward, Gudmundsen won a point at the net for a 13-5 lead.

Behind 6-14, Ilwaco attempted a comeback. Ellie Kulm’s ace made it 8-14. Ilwaco fought off a powerful kill attempt to the back row by Chapman and won a long rally to make it 11-14. Chapman won the next point with a kill, then served three straight aces to extend the lead to 18-11. Naselle won 25-14, going up 2-1.

In the fourth set Tutu’u, playing near the net, went back on the ball and had a well-placed hit while fading away from the net, giving the Comets a 6-3 lead. Gudmundsen set up Tutu’u for an overpowering block for an 11-3 lead. Ilwaco cut the lead to 21-15, but Tutu’u won a battle at the net for a seven point lead. Gudmundsen set up a high-flying Chapman for a spectacular kill for the match point, giving the Comets a 25-17 victory in the final set.

Ocosta beat Naselle in three close sets on Thursday, Sept. 8, winning 25-23, 25-21 and 28-26. The Wildcats, who went 6-4 in the 2B Pacific League last year, were a tough early-season test for the 1B Comets. For Naselle, Tayler Ford had seven kills, Ellie Chapman had six kills and 14 digs, Amelia Tutu’u had six kills, Taylor Gudmundsen had 15 assists, and libero Lily Harman contributed 15 digs.

Ilwaco got its first win of the volleyball season on Thursday, Sept. 8, beating Winlock in five sets. The Fishermen won the first two sets 25-16 and 25-21. The Cardinals tied it up, winning the next two sets 25-14 and 25-22. Madeline Jacobson had a block to finish off the decisive set, which Ilwaco took by a 15-7 score.