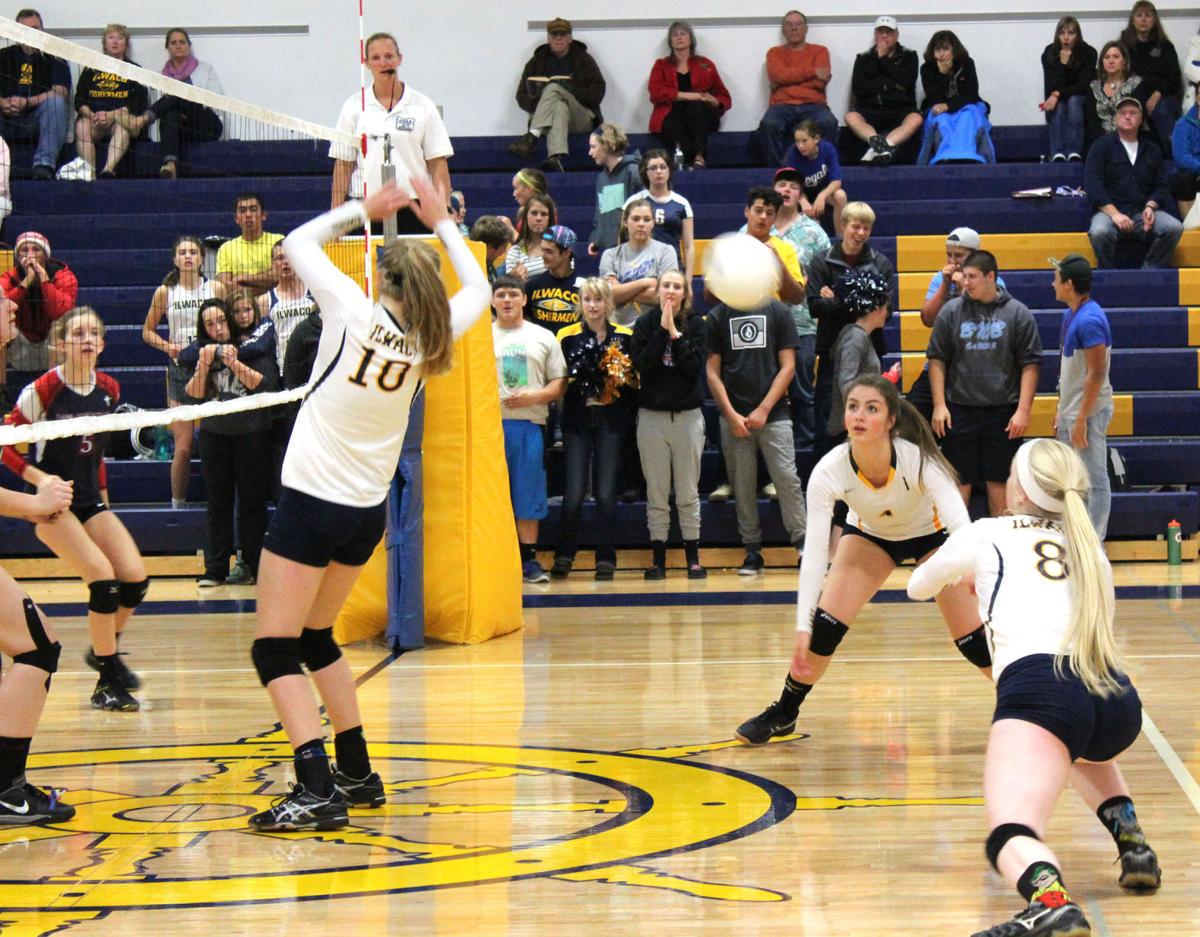 After the ball flies over Madeline Jacobson at the net, Ilwaco team mate Bre Kondos (8) dives to make a dig, watched all the way by Elizabeth Kulm. 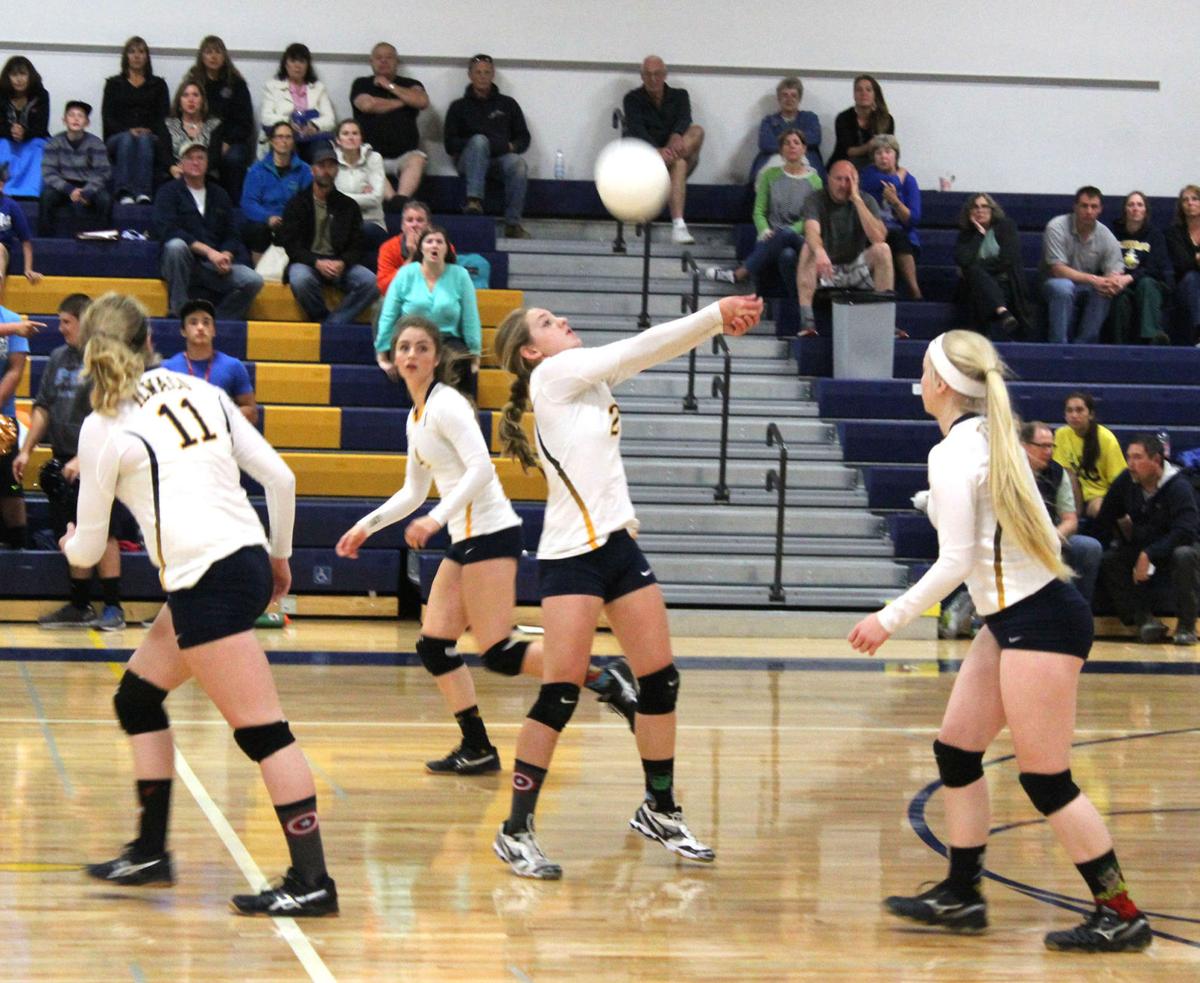 Ebby McMullen isn't even facing the net when she plays the ball over her head during action in the third and final set of the volleyball game against Life Christian of Tacoma Wednesday. With her, left to right, are Abby Bentley, Elizabeth Kulm and Bre Kondos.

After the ball flies over Madeline Jacobson at the net, Ilwaco team mate Bre Kondos (8) dives to make a dig, watched all the way by Elizabeth Kulm.

Ebby McMullen isn't even facing the net when she plays the ball over her head during action in the third and final set of the volleyball game against Life Christian of Tacoma Wednesday. With her, left to right, are Abby Bentley, Elizabeth Kulm and Bre Kondos.

The Eagles were soaring after the Ilwaco home volleyball game Wednesday night.

After playing a second set that would have credited any team, the Fishermen were just swamped in the third as Life Christian Academy won 25-14, 25-21, 25-11.

In the opening set, the Eagles moved ahead to a comfortable lead which they maintained throughout to win, 25-14.

The second set was totally different.

Ilwaco began strongly. Sparked by a couple of ace serves by sophomore Madeline Jacobson, the home team was gaining traction at 8-4. A particularly solid kill by junior Elizabeth Kulm kept this going, but Life Christian came back and took the lead at 14-15.

A block at the net by Jacobson knotted the scores at 15-15 and back-and-forth play over the next two tied points, including another ace served by Jacobson, had the home crowd engaged in each play.

The Eagles moved ahead to lead 20-18, and although Ilwaco kept the scores close, the visitors from Tacoma were never behind again.

“We are working to play all our games that way,” said Ilwaco head coach Rachelle Ridout. “There were some really outstanding rallies and the scores didn’t reflect the way we played.”

The margin in the third set was an example. Ilwaco players were diving for near-impossible balls and sometimes getting them back, with senior Bre Kondos and freshman Ebby McMullen hitting the deck to make the visitors earn every point, even when the Fishermen were down 5-18.

During one rally, McMullen was facing entirely away from the net when she managed to control the ball and steer it back toward Life Christian territory.

But at 9-21 a couple of bad serves essentially concluded the chances of an Ilwaco comeback.

“This week we saw a lot of girls pick up their game,” said the coach. “I’m looking forward to working so that all the girls have ‘on games’ at the same time.”

The loss takes the Fishermen’s season record to 1-4. Ridout is pleased at the energy of her players, while looking for a return of the consistent play that defeated Oakville in four sets Sept. 17.

“The girls have really been doing a great job in putting in the full effort, no matter what the score.”

Finishing 0-5 in the round-robin format pool play at the Raymond Volleyball tournament Saturday, pushed Ilwaco into the consolation bracket.

The Fishermen rallied to beat North Beach in two sets in a best-of-three contest to advance to the consolation bracket championship game against Orting. However, the Cardinals won the final, also in two sets.

The tournament, the second on successive weekends, gave Ridout another chance to check out the opposition.

“We faced a lot of teams that are going to be in our league,” she said. “All the teams are fairly strong.”

Before hosting the tournament, Raymond had won its four matches to date, all in three sets. The Seagulls will come to Ilwaco Oct. 28 on the last night of the regular season.

“Right now it’s just a matter of putting things together and having everyone on the same page playing our game,” Ridout said.