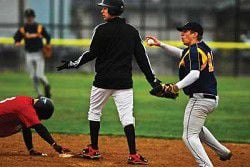 <I>Photos by DAMIAN?MULINIX/Chinook Observer</I><BR>With two Bruin runners standing on second base at the same time due to running error, Ilwaco's Justin Short tags one out before throwing to third for a force out on the other. 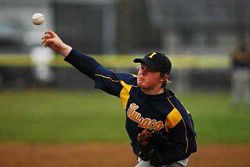 Starting pitcher Trevor Couch was the winning pitcher against Columbia for the second straight day, striking out three batters in four innings' work.

<I>Photos by DAMIAN?MULINIX/Chinook Observer</I><BR>With two Bruin runners standing on second base at the same time due to running error, Ilwaco's Justin Short tags one out before throwing to third for a force out on the other.

Starting pitcher Trevor Couch was the winning pitcher against Columbia for the second straight day, striking out three batters in four innings' work.

ILWACO - "This is the first time we have won a Trico League series in four years," an excited coach Dave Tapio stated after the Fishermen downed Columbia of White Salmon 10-2 in a rain-shortened game in Long Beach Friday. The two teams split a doubleheader at White Salmon the day before.

The Bruins broke on top in the first inning 2-0, but a huge five-run second gave Ilwaco a lead they would not relinquish. Trevor Couch was the winning pitcher, going four innings and striking out three. Ryan Tapio pitched a scoreless fifth on a mound made slippery by a steady rain.

Justin Short turned a double play at shortstop in the second frame and Skyler Olson made two running catches in centerfield to bolster the errorless Ilwaco defense. Wirkkala tossed a runner out from his catcher position and was solid behind the plate.

In the first frame Couch walked and stole the first of three bases he would swipe on the day. Short singled him home with the first of his three base hits this day. Olson led off the second with a booming triple to right center and scored on Matt Wood's sacrifice to knot the game at 2-2.

Couch then singled and Austin Wirkkala doubled him home. Later Short singled in two more runs and then Tapio singled him home to put the Fishermen up 6-2. Ilwaco exploded for four more runs in the bottom of the fourth on two walks and Short's RBI-single. Olson drove home two with his second hit of the contest and Couch plated the final run with another single to make the count 10-2.

Both Couch and Short were 3-3 to lead Ilwaco's offense. Wirkkala had a double, Olson was 2-3 with a triple, and Dylan Short and Tapio added base hits. Corey Dunn walked three times and scored once. Coach Tapio explained, "We hit well again today, played very good defense on a field that got more slick as the rain continued, and we pitched well."

The Fishermen are now 3-5 in the Trico and 4-7 overall. They are in the hunt for third place and a playoff berth or fourth place and a pigtail game. The Bruins fall to 1-8 in league play.

Olson's grand slam helps Fishermen split with Bruins WHITE SALMON - Ilwaco's Justin Short struck out 10, but lost a heart- breaker in the opener 2-1, however Skyler Olson's grand slam home run in the second game helped the Fishermen to a 13-1 win and a split of a Trico League doubleheader there Thursday.

In the first game Short had a career-high 10 strikeouts and threw a four-hitter, but in the fateful fourth inning he gave up a single, Ilwaco committed its only error of the day and then three straight bases on balls forced in the tying and winning runs for the Bruins.

White Salmon's mound ace, Felix Torres, matched Short pitch for pitch after allowing Austin Wirkkala's double down the left field line and Short's RBI single between shortstop and third base in the first inning. Ilwaco stranded a runner on third base in the second inning and had runners on second and third in both the fourth and fifth frames, but could not score. Trevor Couch, Nick Cox and Olson each added singles in the loss.

In the night cap Olson blasted the first pitch he saw over the centerfield fence with the bases loaded and Ilwaco already leading 2-0. "I had been in a slump. Hopefully this will get me going," the left-handed hitting junior said. He finished 4-7 on the day and in the second game had a triple to go with his "grand salami" and he knocked in six RBI for the game.

Short blasted a double and triple in the second game victory and Cox contributed two safeties. Couch was 1-1 and walked twice and stole four bases. Wirkkala, Ryan Tapio and Dylan Short also had base hits in the win. Couch pitched three innings to pick up the victory, striking out three, walking one and picking off two runners. Tapio pitched the final two innings in relief and notched four strike outs in the game shortened by the 10-run mercy rule.

Photos: Nebraska didn't win both Weeks 2 and 3 of the 1970. But the Huskers didn't lose, either

Get to know the Wisconsin Badgers' 2020 football recruiting class