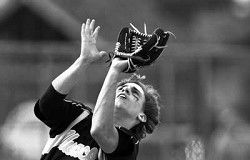 <I>DAMIAN?MULINIX/Chinook Observer</I><BR>Ilwaco's Justin Short looks to make a catch of an infield pop-up during the first game of the doubleheader with Castle Rock.

<I>DAMIAN?MULINIX/Chinook Observer</I><BR>Ilwaco's Justin Short looks to make a catch of an infield pop-up during the first game of the doubleheader with Castle Rock.

LONG BEACH - David Stull pulled a long home run over the left field fence in the bottom of the seventh to knock in two runs, but his hitting heroics weren't enough to bring his Fishermen back against Trico League co-leading Castle Rock in what turned out to be the second game of a doubleheader in Long Beach May 1.

The Rockets won a 10-0 decision in the opener of a bizarre contest that took 26 hours to play when all was said and done and despite Stull's home run and RBI single in the fifth inning Castle Rock won the night cap 9-4. The middle game of the three-game set was declared a forfeit by Ilwaco when their short-handed team was unable to field nine players after an ejection April 30, there.

The teams were scheduled to play a double-dip at Castle Rock Thursday, but in the second inning an Ilwaco player was ejected for "repeated use of profanity." Since the Fishermen had only nine eligible players available the umpires erroneously declared the game a forfeit with the score 4-0 in favor of Castle Rock in the top of the second inning.

After sorting out the Washington high school rules (which state a team can begin a game with nine players and finish with eight, but cannot start with eight or the contest is forfeited) it was determined that the two teams would complete the first game of the doubleheader in Long Beach. The game resumed at the point where it had left off and then the final game of the three-game series followed.

Castle Rock completed a 10-0 win in five innings by the mercy rule in the first fray. Trevor Couch was 2-3 with a double and Skyler Olson, who pitched the complete game, going one inning April 30 and four innings May 1, was also 2-3 at the plate with a triple. Justin Short and Tyler Johnson were both 1-2 in the loss.

In the second game in which Ilwaco was then the home team, Short held the Rockets scoreless until the third inning and then gave way to Couch on the mound in the fourth. Castle Rock built a 7-0 lead before Stull drove home his first RBI with a single in the fifth. Short's double in the sixth plated Olson who had walked and Stull's two-run homer in the seventh drew the Fishermen to within 9-4. Three Rocket pitchers allowed only Stull's two hits and Short's for the contest, however.

Coach Mike Sinor said, "Yesterday was a real low point for our team, but today the guys came out, played hard and had fun against the number-two ranked team in the state. They showed that they can compete with anyone when they put it all together like I know they can. I couldn't be prouder of the guys." He had praise for his pitchers saying Olson, Short and Couch threw strikes and competed well. Sinor also praised the defense of Olson in centerfield and Johnson at first base.

Castle Rock is now 16-0 overall and 12-0 in Trico action and is tied with Kalama atop the league, while Ilwaco drops to 2-13 for the year and is 1-11 in league play. "Our team goal now is to finish strong with our three-game set against LaCenter," Sinor concluded. The Fishermen still have an outside chance to climb into fourth place and a post-season bid, but only if they win all three games against LaCenter the final week.