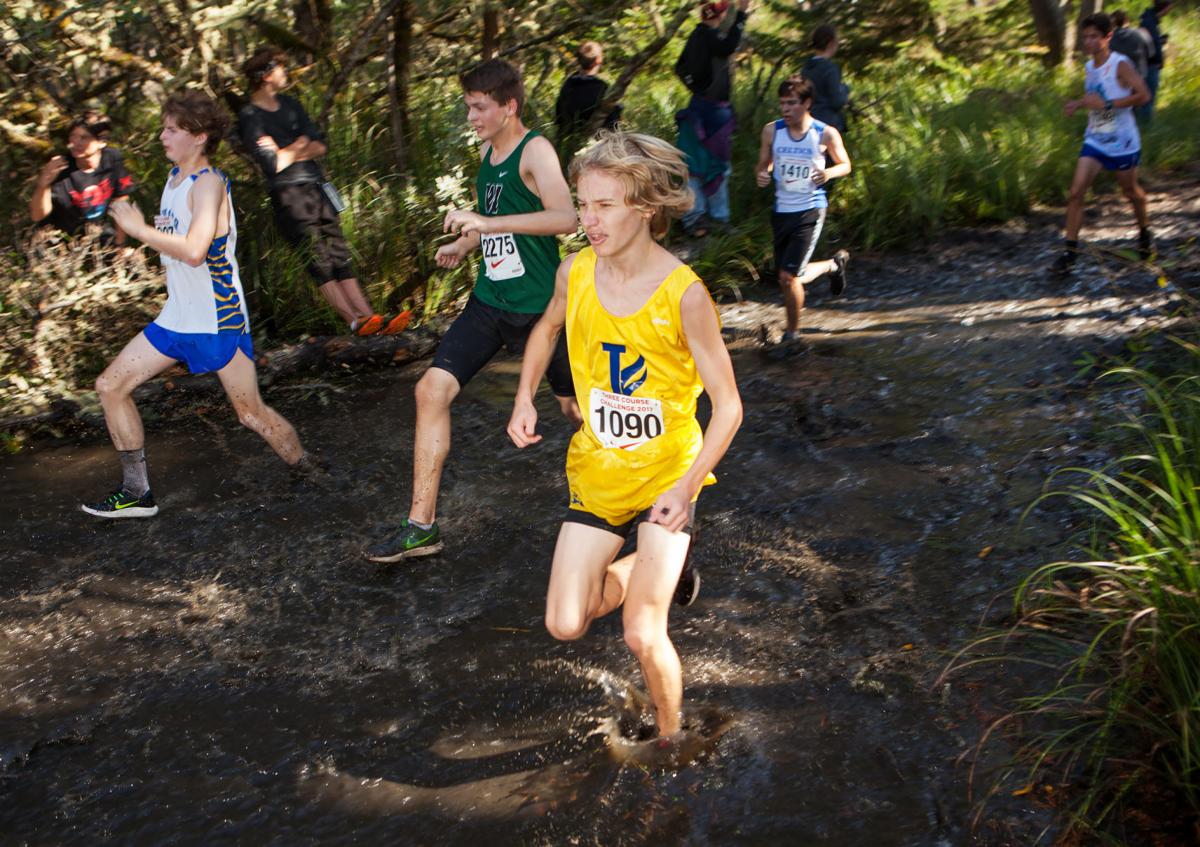 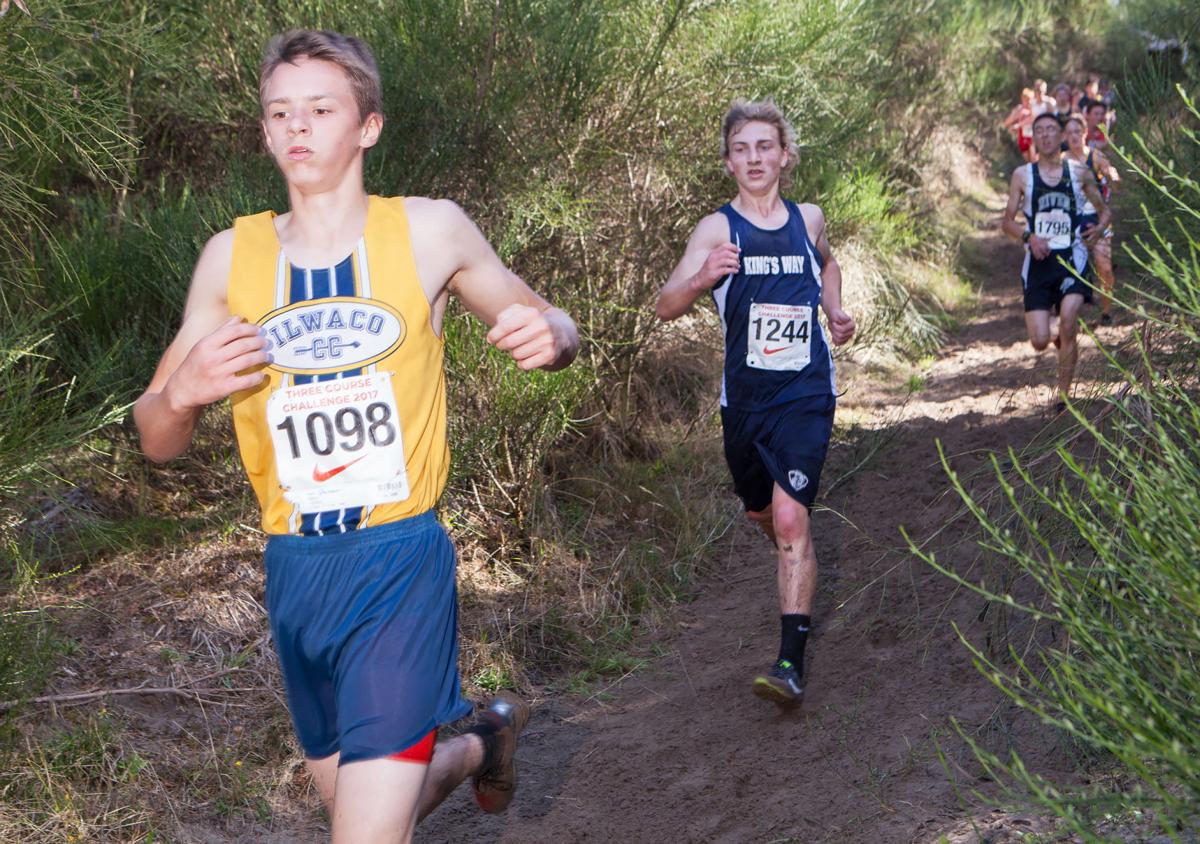 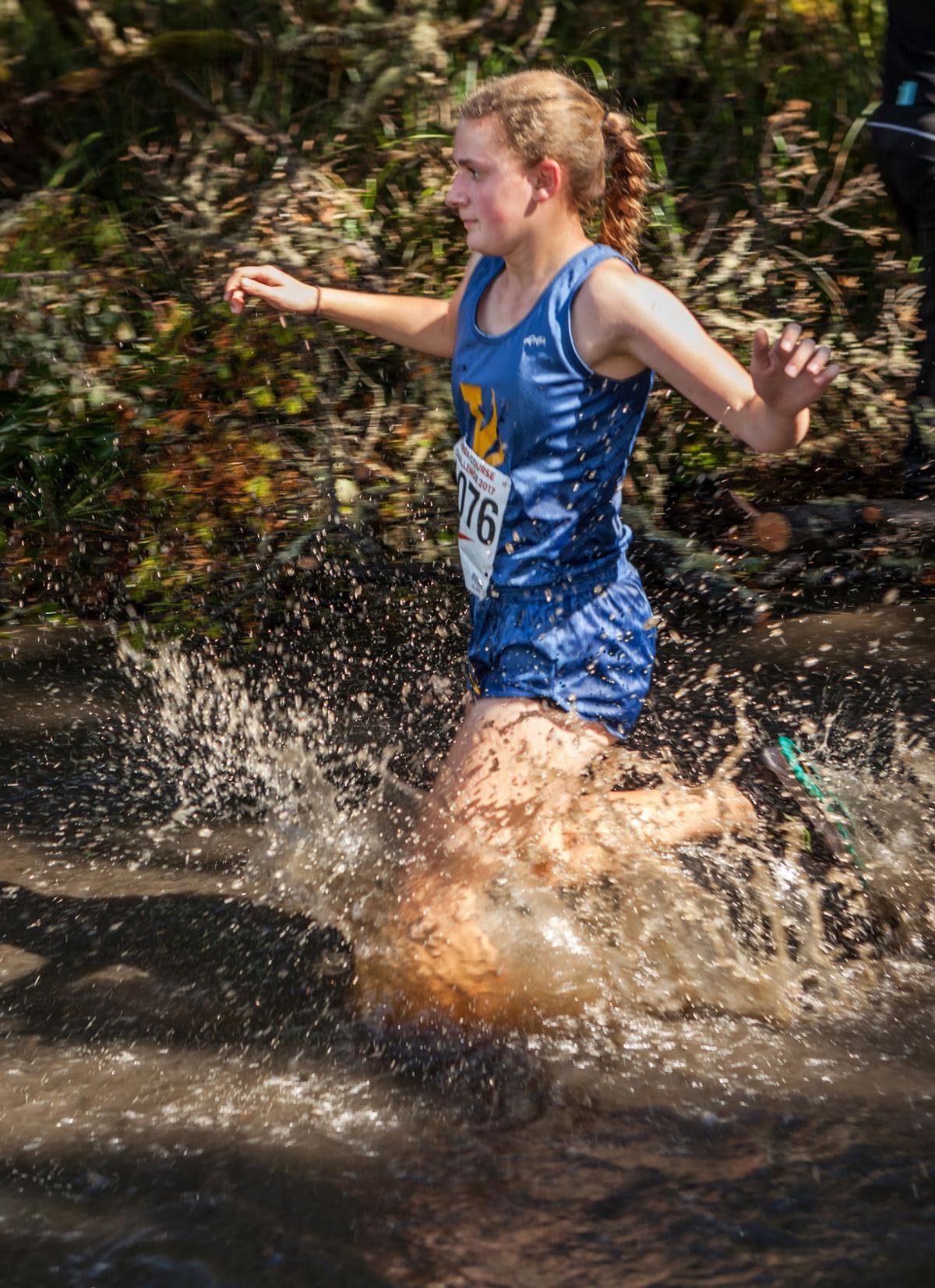 Ilwaco's Alex Carper hit the water hazard of the moderate course of Saturday's Three Course Challenge at Camp Rilea. The water hazard was waist deep in most runners this year. 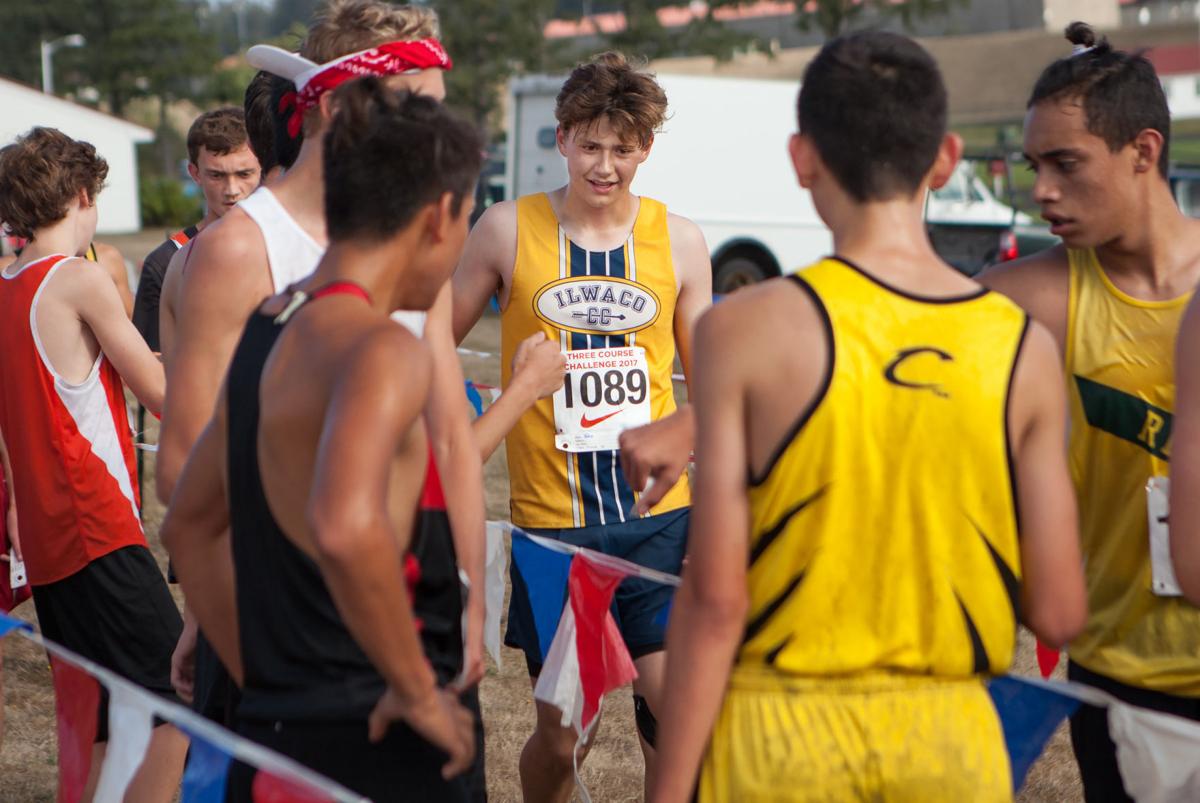 Ilwaco's Alex Carper hit the water hazard of the moderate course of Saturday's Three Course Challenge at Camp Rilea. The water hazard was waist deep in most runners this year.

SEASIDE — As Ilwaco junior Ghannon Wheldon entered the water hazard on the hard course of Saturday’s Three Course Challenge Cross Country meet at Camp Rilea National Guard Base in Seaside, he had to think quick.

“A couple people ran through and then they fell and I had to run around them. It was a lot harder to run through because of how deep it was — it was waist deep,” he said after the race. “I just went for it.”

“Clear Lake,” as the hazard has been dubbed by the hosts of the meet — now in its 28th year — actually resembled its name Saturday, after heavy recent rains caused the area to flood. In fact, it rained so much there were two water hazards this year.

“The water pits were like small lakes,” said Ilwaco sophomore Alex Carper after the race. “I just went right through it. I’m sure it did (slow her down), but it was refreshing.”

IHS cross country coach Sarah Taylor said that’s one of the reason’s her team has come back 11 straight years.

“It’s very different from anything else we’ll do. So the kids get an opportunity to run in some different races and do some different things,” she said Saturday. “It’s close by so families can come over and watch their kids. Not a lot of our races are nearby, and they’re usually on weekdays at 3 o’clock, so parents can’t always get to them. It’s huge and so it’s fun to see runners from all over the Northwest — and further.”

The Ilwaco boys won their division and the Lady Fishermen came in third. To calculate the team scores, they use the placings the teams top runner in the easy race and the top two in the moderate and difficult races.

Naselle’s lone runner, Lindsay Hunt, placed 141st overall in the girls easy race in a time of 26:12. She placed 19th in division five results with her time.

Whiting finished in 18:30, 10 seconds ahead of Toledo’s Nicholas Marty. He got the first first-place finish of his career at the event, which also drew runners from Rainier, Mossyrock, Wahkiakum, Winlock, Naselle, and Toutle Lake.

Tristan Trudell was fourth at 18:48. Ivan Ramirez was seventh in 19:54. Junior Ghannon Whelden finished in 20:17, good for eighth place out of 45 runners. It was his first time in the top ten. Colton McNabb, a sophomore in his first cross-country season, is also rising rapidly. He was ninth at 20:22. Adam Rutherford followed at 20:24.

Ilwaco’s boys put up a team score of 26, lapping second-place Rainier and Mossyrock, who each scored 65.

The Fishermen girls’ win was much closer at 28-35 over second-place Rainier. Rainier’s Elaina Hansen was in second place at 22:03, four seconds ahead of Bannister. Estella Sheldon (22:38), Alex Carper (22:47) and Kaytlenn Whelden (22:51) finished fifth, sixth and seventh to pile up strong finishes for Ilwaco. Rainier had the next four finishers, but Carli Kemmer crossed in 12th at 25:20 to clinch the win for Ilwaco. Mossyrock placed third. Toutle Lake’s Meleah Kandoll won the race by 20 seconds in 21:43, but Toutle did not have enough runners for a team score.

For Naselle Ian Fontanilla finished in 24:05, while Tori Beatty finished the girls’ race in 45:38.

Junior Jose Luis Mendez-Hernandez made his cross-country debut for Ilwaco, finishing in 26:02.

Watch now: Reimer says Huskers have 'a lot left in the tank'

Watch now: Despite loss, Frost says he is 'proud' of team

Photos: Iowa hangs on to beat Nebraska to claim the Heroes Trophy for sixth straight year