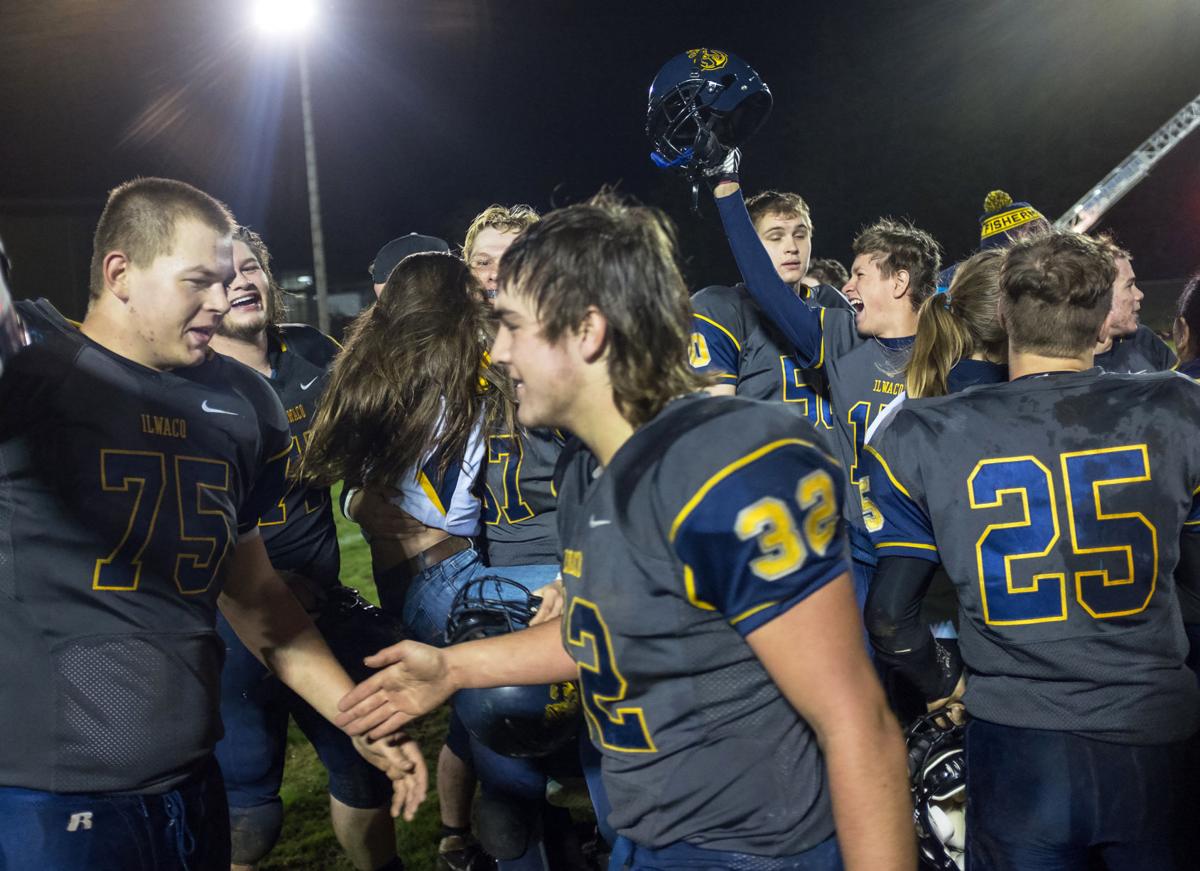 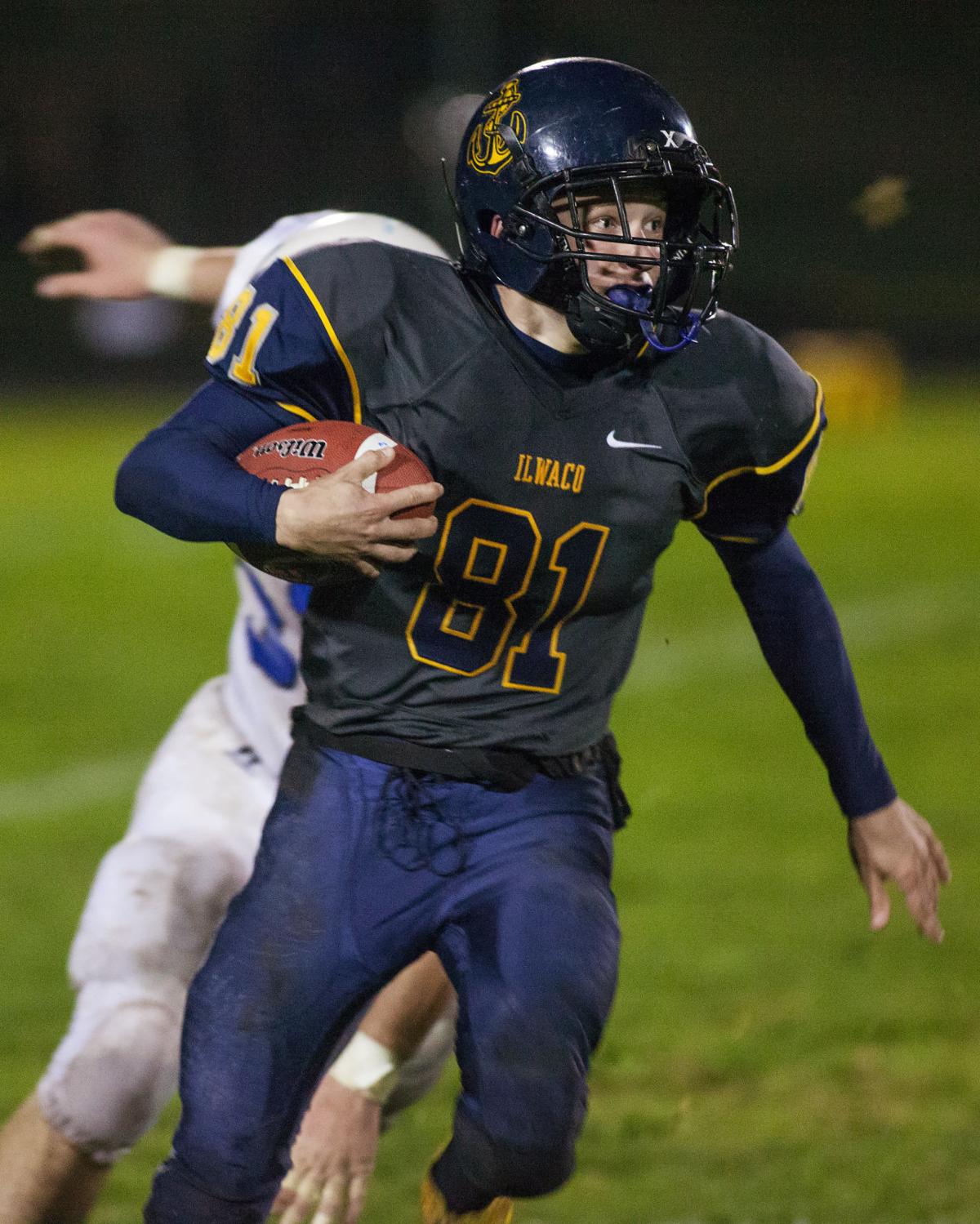 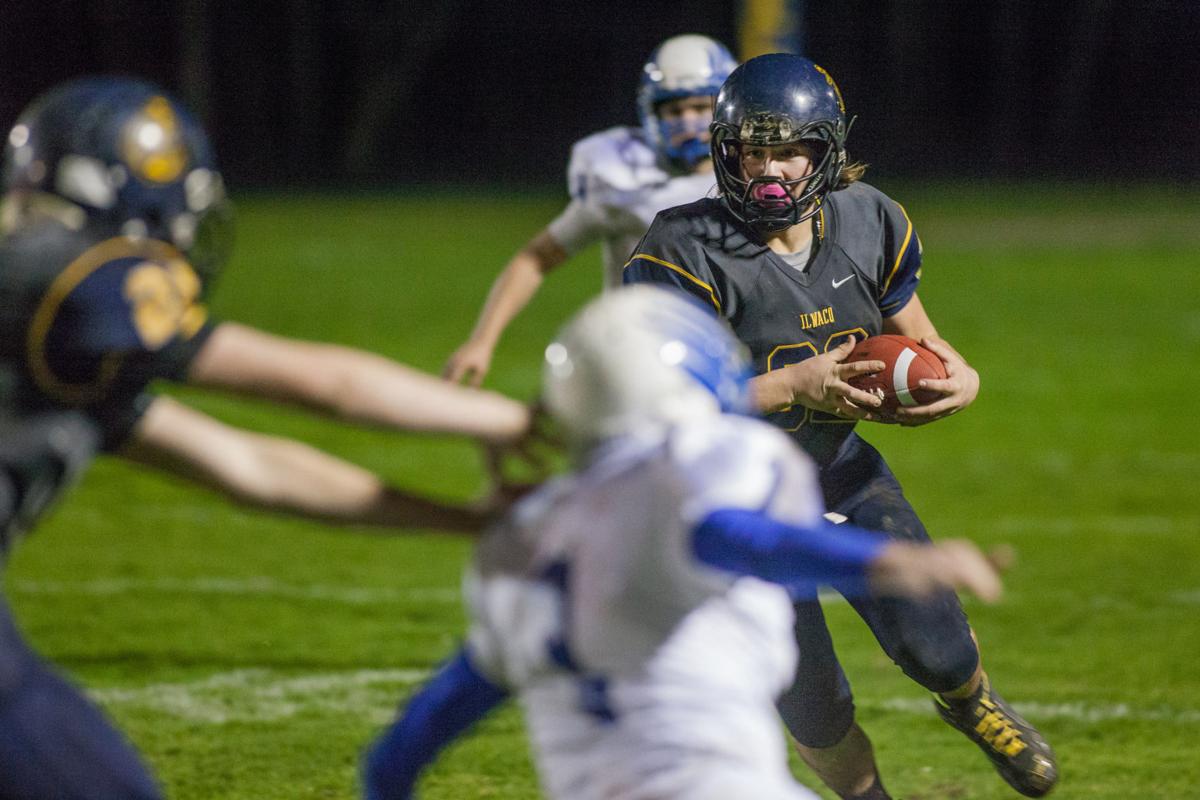 Brandon McMullen picks up some of his game-high 101 rushing yards during the Fishermen's district playoff win Friday. 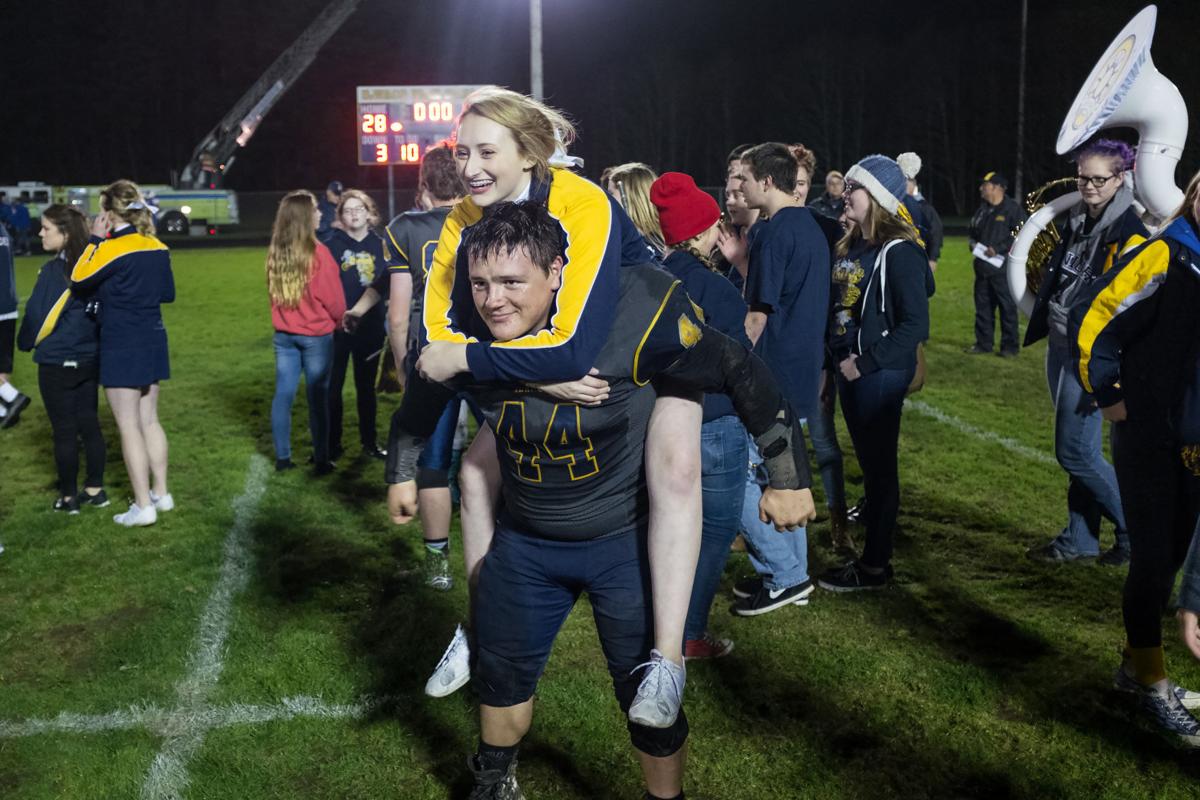 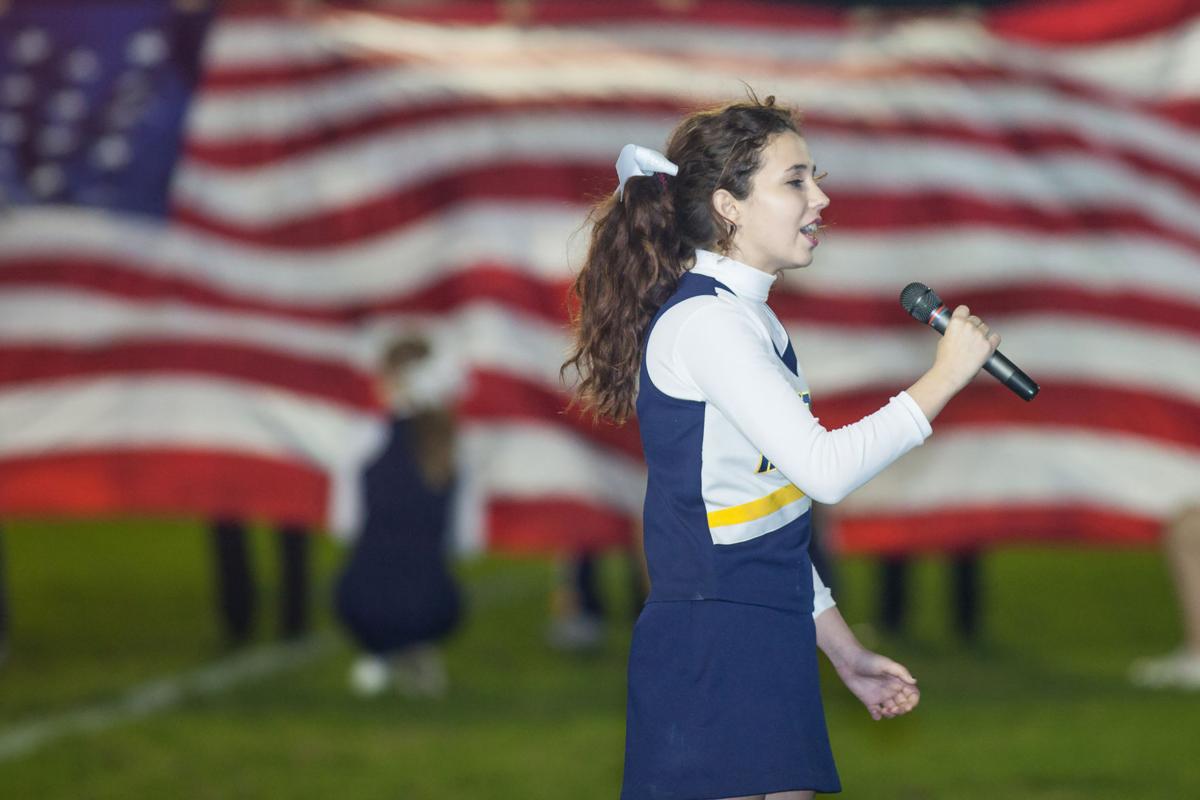 Prior to the start of Friday's home football playoff game, cheerleader Cheyenne Bent performed the national anthem with the IHS pep band. 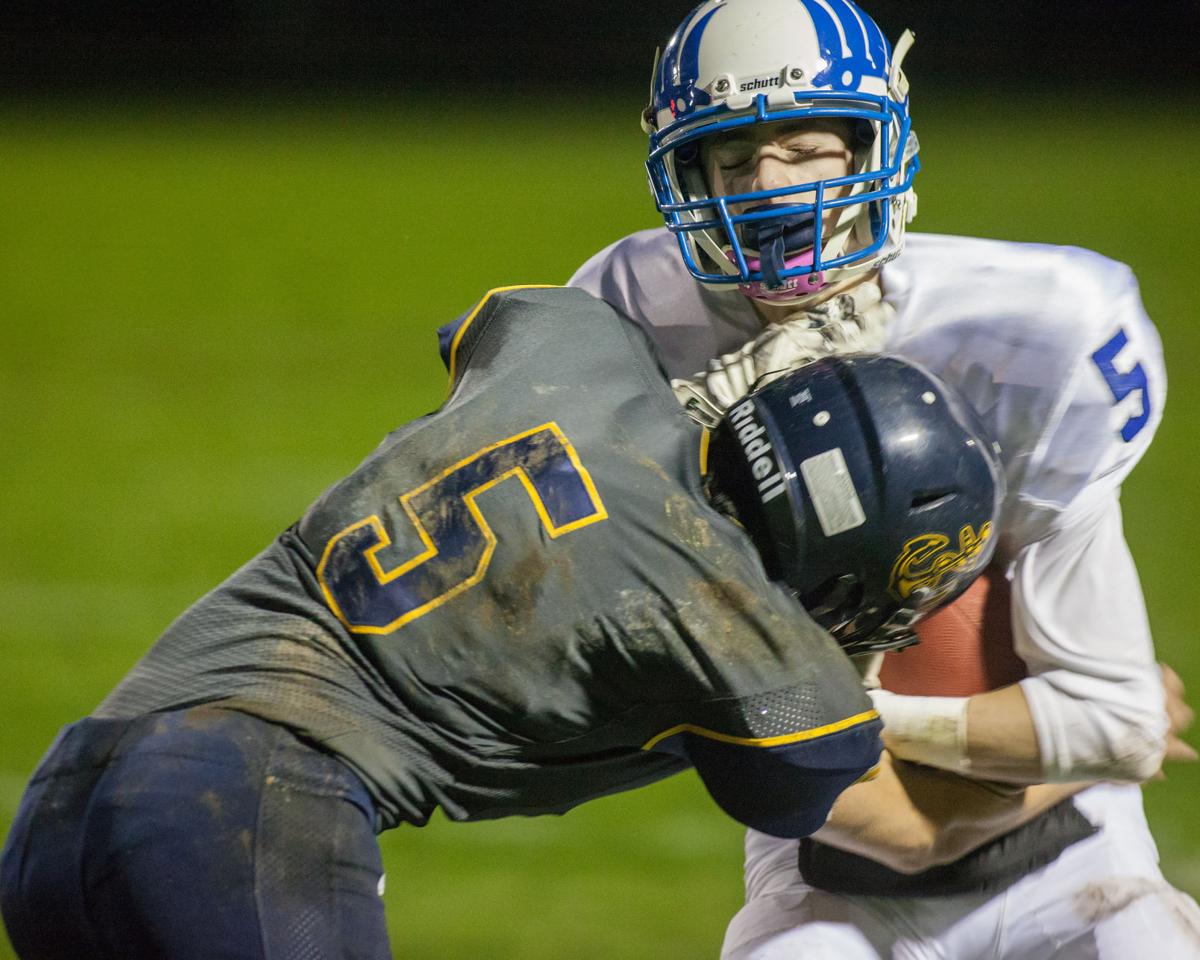 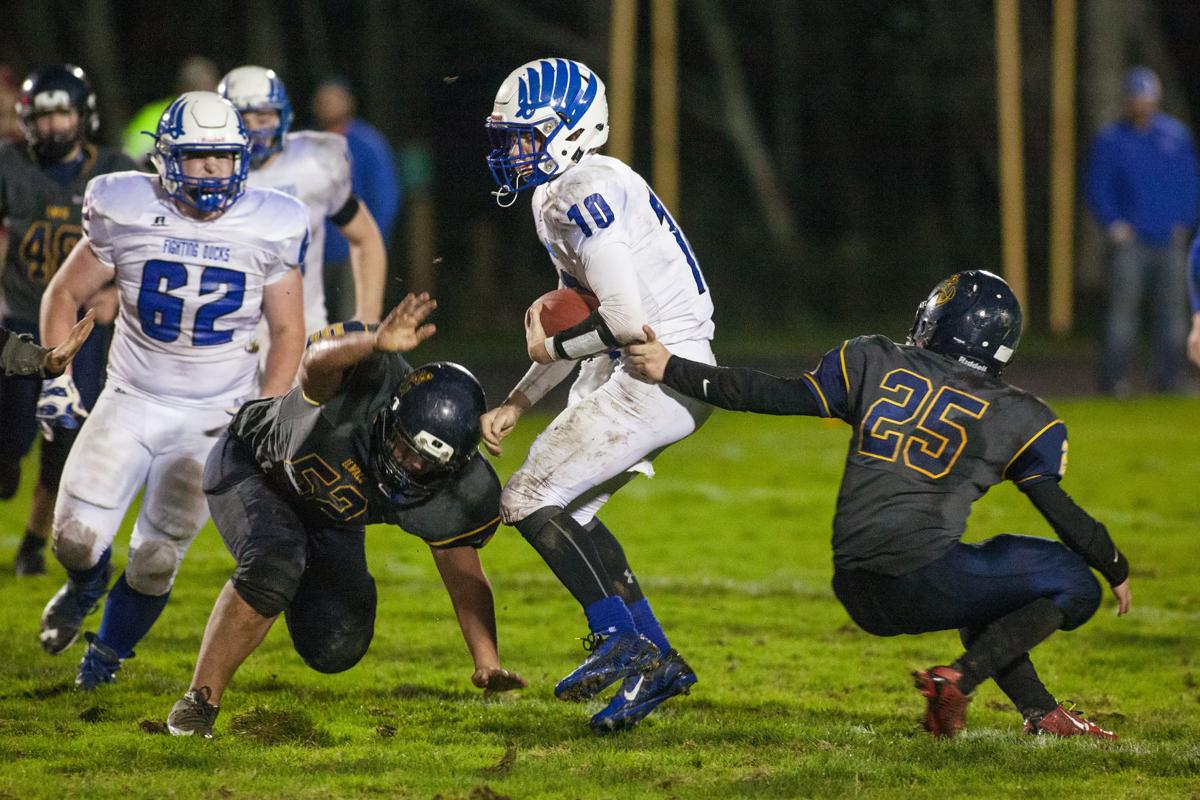 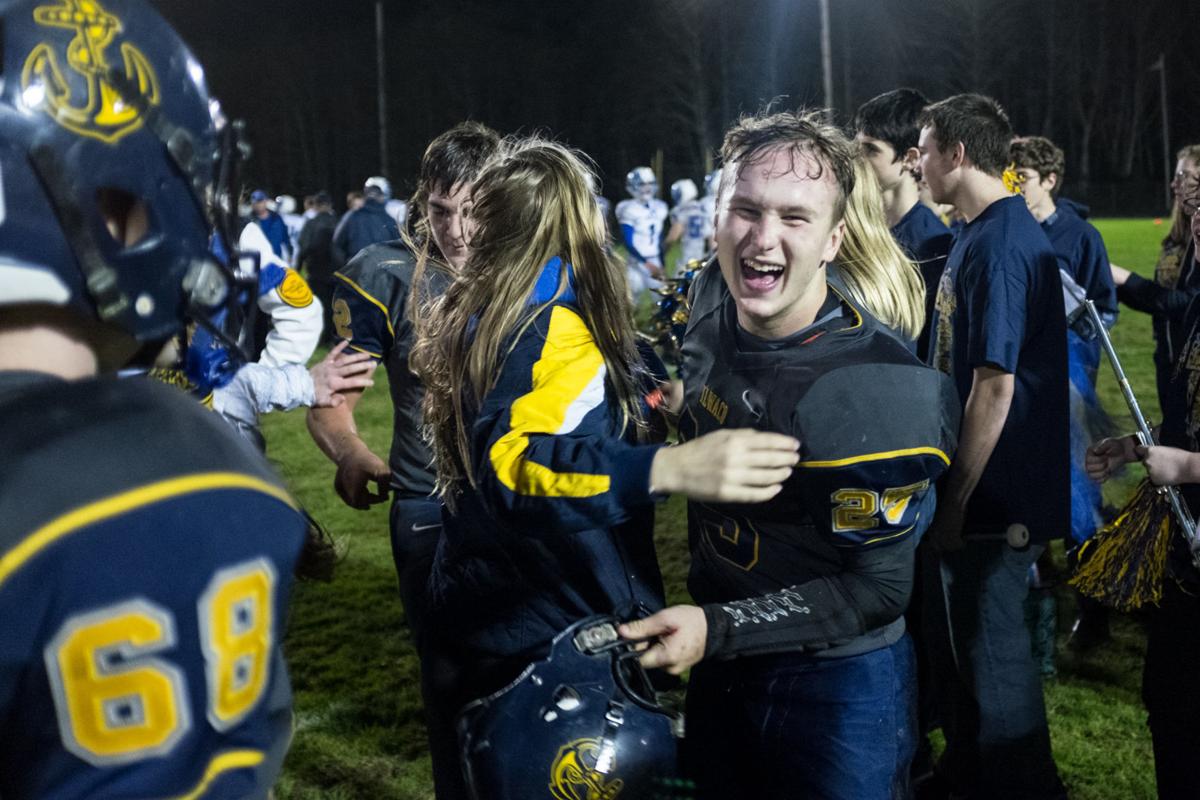 Brandon Duke after the game.

Brandon McMullen picks up some of his game-high 101 rushing yards during the Fishermen's district playoff win Friday.

Prior to the start of Friday's home football playoff game, cheerleader Cheyenne Bent performed the national anthem with the IHS pep band.

Brandon Duke after the game.

ILWACO — The Fishermen advanced to State football playoffs with a 28-6 win over the Central League’s Toutle Lake Ducks on Friday, Nov. 4. With a 4-1 Pacific League record, Ilwaco earned the favorable matchup in the Pacific-versus-Central crossover round. The victory over Toutle (2-9) wasn’t a surprise, but Fishermen players and Ilwaco students celebrated briefly on the field afterwards in recognition of a strong season and the hope of something more. Ilwaco faces a very tough first round matchup against third-ranked Toledo, which beat them 42-13 in September.

Though they were favored, the Fishermen opened the game aggressively with an onside kick, a play that has been a major weapon for them since the start of league play. Ilwaco’s Royce Murray pounced on the loose ball, giving Ilwaco the opening possession. Tenyson Ramsey picked up a fourth-and-13 by stretching just across the first-down marker on a reception. That kept alive Ilwaco’s 12-play opening scoring drive, which Alec Bell capped with a one-yard run.

Ilwaco started its second possession pinned at its three-yard line. After a quick Fishermen first down, quarterback Jack Odneal broke away for a 49-yard run into Ducks territory. “The play was a dive (for running back Brandon McMullen), but I had the option to fake (the handoff). Their lineman crashed on McMullen, so I took off, and I got good blocks,” Odneal said. That led to another Bell touchdown for a 14-0 second quarter lead.

The Ducks scored with 33 seconds in the half. Then, with only nine seconds remaining, Ilwaco handed to McMullen at the 41-yard line. He had a huge opening and got near the goal line before being tackled at the one-yard line with no time remaining. “They went into a prevent defense to try to stop the long pass, and we decided to run it. Jeb Sheldon cracked down with a block and got me free,” said McMullen. “I probably should have dived for that final yard.”

On the opening drive of the third quarter, McMullen turned a short pass into a 30-yard gain, then followed with a 10-yard run to the outside, pushing the ball to the Ducks’ 20. Bell finished the drive with a one-yard touchdown run, his third score of the game.

Trenton Cox came up with the recovery of another onside kick for the Fishermen, their 11th in their past five games. “Jorge Galvan has gotten good at making it take funny hops,” said coach Kevin McNulty. “He puts in time with [assistant coach Nick] Pilon. We watch film and see where they’re vulnerable. Teams are expecting it, they have nine guys up on the line, but a lot of teams still put their linemen out there. And, nothing against linemen, but they don’t always have the best hands.”

McNulty has turned to routine onside kicks after concluding that the benefits outweigh the costs. “Many more teams are doing it nationwide…It’s something we’ve done the last couple years,” he said. McNulty cited research showing the average high school team returns a regular kickoff to the 33-yard line, only 14 yards short of where they start on average after an onside kick. That means the advantage of kicking deep is small, whereas the potential benefit of an onside kick is gaining an extra possession. “The other thing is, you avoid the danger of a big return,” he added.

Ilwaco put together its final scoring drive late in the third quarter. McMullen finished off the drive with a powerful eight-yard touchdown run up the middle, pushing a pile of defenders the final four yards. McMullen had 101 yards on 16 carries, along with 35 yards on his only reception. Bell carried 14 times for 69 yards and three scores. “The offensive line was doing their job, and (Alec) Bell made some good blocks leading me into the hole,” McMullen said. “They were trying to shift their line and confuse us, but it didn’t work. They couldn’t stop us, so we just kept running.” Odneal was 7 of 11 for 98 yards passing and ran for another 69 yards.

Watch now: Here's what Lubick, Chinander and Husker players are saying ahead of Iowa game