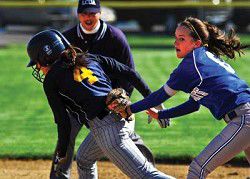 <I>DAMIAN?MULINIX/Chinook Observer</I><BR>Ilwaco's Kate Denton is tagged out in the rundown between second and third by the LaCenter shortstop in the Lady Fishermen's 11-3 loss Friday. 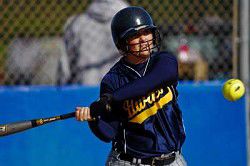 Ilwaco's Kelsey Madsen swings for a hit in the Lady Fishermen's game with LaCenter Friday.<I><BR>DAMIAN?MULINIX/Chinook Observer</I>

<I>DAMIAN?MULINIX/Chinook Observer</I><BR>Ilwaco's Kate Denton is tagged out in the rundown between second and third by the LaCenter shortstop in the Lady Fishermen's 11-3 loss Friday.

Ilwaco's Kelsey Madsen swings for a hit in the Lady Fishermen's game with LaCenter Friday.<I><BR>DAMIAN?MULINIX/Chinook Observer</I>

LONG BEACH - LaCenter plated eight runs in the second inning on their way to an 11-3 Trico League win over the Lady Fishermen at Culbertson Field Friday. The Lady Wildcats sent 12 players to the plate and took advantage of four bases on ball, four base hits and an Ilwaco error to essentially put the contest away in the big inning.

Coach Rick Bishop lamented, "We had only bad inning, but you can't walk the seventh, eighth and ninth hitters and make an error against a good team and hold them down. Other than the second inning we out-played LaCenter, but you have to play well all seven innings."

Ilwaco scored in the fourth frame when Alexa Wirkkala belted a long home run over the left fielder's head. It was the sophomore shortstop's school record fifth round-tripper of the season. In the sixth stanza the Lady Fishermen scored on Aimee Banuet's triple, Ashley Tapio's RBI single, a fielder's choice and Kady Kirby's clutch two-out RBI base hit. Also getting hits in the fray for Ilwaco were Kate Denton and Kelsey Madsen.

For the third time in four days LaCenter's Kylie Monson was the winning pitcher against Ilwaco, allowing six hits while striking out seven and walking one. Alexis Couch gave up 10 hits, 11 runs, nine of which were earned, walked seven and struck out six in the circle for the Lady Fishermen. Ilwaco has now lost six games in a row after winning their first nine.

Bishop stated, "We have got to make plays at key times in the game and we have to throw strikes. They are a good team and played exceptional defense, robbing us of several hits with good plays. To our credit we did come back with three runs in the later innings."

The Lady Fishermen are now 9-6 for the season and remain in fourth place with a 6-6 record in the Trico. LaCenter is still in third place with the win and have a 7-5 league record. Kalama is second at 8-4 and Castle Rock remains undefeated in Trico play at 12-0.

Ilwaco is assured of at least a pigtail game against the Evergreen number five team. That game will be played at the Trico team's home field May 18 at 4 p.m., with the winner qualifying for district and the loser being eliminated. A three-game sweep of Kalama would give the Lady Fishermen sole possession of third place and avoid the pigtail contest.

LaCenter sweeps 4-0, 5-4; Lady Fishermen fall to fourthLaCENTER - A week ago Ilwaco was 9-0 with the best start in Lady Fishermen softball history and they were tied with Castle Rock for the top rung in the Trico League ladder with a 6-0 mark. After being swept convincingly by the defending state champ Lady Rockets last week, Ilwaco ran into a plucky LaCenter nine there May 5.

The result was two hotly-contested losses and a drop to fourth place in the league. Since both LaCenter and Ilwaco have identical 6-5 records, Trico League standard operating procedures state that head-to-head records break the tie. Since the Lady Fishermen are 0-2 against the Lady Wildcats, Ilwaco drops to fourth place.

The Lady Wildcats won the first game 4-0 and scored three runs in the bottom of the seventh of the second game to rally for a sweep of Ilwaco 5-4 and take over possession of third place in the Trico League. Aimee Banuet was 2-3 in the opener and Ashley Tapio, Kady Kirby and Alexa Wirkkala each belted base hits for Ilwaco despite the shutout. Kelsey Madsen's RBI triple in the second game was the big blow for the Lady Fishermen. Singles by Kate Denton and Tapio were the only other hits Ilwaco managed in scoring four runs.

Coach Rick Bishop stated, "We hit the ball hard in both games, but they played great defense, especially up the middle in centerfield and at second base and shortstop. Unfortunately in the first game we did not get the big hit when we had runners on base. Three times we had runners in scoring position with one or nobody out and we couldn't get the clutch hit to score a run."

Bishop added, "We played spotless defense for 12 innings, but had two bad innings and LaCenter was able to take advantage. Even though they lost three star players (the Dawson sisters transferred to Union High), they have the experience of finishing third in the state last year and that was the difference."

Ilwaco could have easily improved their 4-2 advantage going into the final frame of the night cap. Bishop argued that an Alexa Wirkkala line drive that would have scored two more Lady Fishermen runs hit the left field foul line, but the home plate umpire called the slam a foul ball instead.

LaCenter led off the fateful seventh stanza by their first hitter reaching on an error. A double and a bloop single just over third base made the score 4-3 and then another double knotted the score at 4-4. An infield single ended the game with no outs and the Lady Wildcats coming up with three runs and the victory to wrest third place from Ilwaco. "Alexis Couch pitched well in both games and Kate Denton did well at catcher," Bishop praised. Couch is now 8-5, losing five straight in the circle after winning eight.

The Lady Fishermen are now 9-5 for the season and 6-5 in the Trico, as is LaCenter. However, the Lady Wildcats win the season series with the doubleheader sweep. Ilwaco has clinched at least a playoff game against the Evergreen number-five team to qualify for district as they can finish no lower than fourth. The Lady Fishermen could still finish as high as second place by winning their final four contests.

"Last season was the first time ever we were able to not be 10-runned by LaCenter and play seven innings against them," Bishop concluded. "To be extremely disappointed that we lost to them is a big step up for our program."