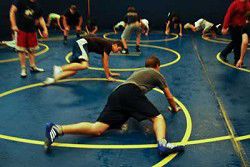 The 50-some wrestlers on the Ilwaco team take part in spirited workouts. 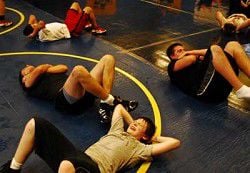 Wrestlers get into shape for the challenging 2010-11 season that lies ahead.

The 50-some wrestlers on the Ilwaco team take part in spirited workouts.

Wrestlers get into shape for the challenging 2010-11 season that lies ahead.

ILWACO - With 36 wrestlers out for the high school and another 15 or so out for middle school wrestling, the cafeteria at the old Ilwaco High School is a pretty hot place to be, especially when the 50-something bodies begin their spirited workouts for coach Kevin McNulty and middle school coach Rob Lake.

The good news is that the 34 boys and two girls are eager and willing to improve and learn their sport. The bad news is that only Taylor Odneal returns with state tournament experience and Dylan Short and Corbin Sutherland are the only returnees that wrestled at regionals. Odneal finished sixth at Mat Classic XXII in the Tacoma Dome and won three straight matches. Dylan Poe also qualified for regionals, but was unable to wrestle because of a mistake during weigh-in.

Beau Morrow, Short and Odneal are all seniors with three years experience in the program for McNulty. Ryan Edwards and Poe are seniors who have wrestled two seasons and Owen Sutherland has one year of wrestling experience. Arnaldo Mondragon, Jaykub Bridges and Sean Shelton are seniors turning out for the first time.

Juniors with two years experience in the program include Elliot Marcus, Josh Berteaux and Taylor Zinn and all should be competitive this season. Ben Ahlin, Isrrael Bautista (who was injured before regionals), Marcos Merino and Peter Zeller give the Fishermen a year of experience and Matt Wood is out for wrestling for the first time.

For the Lady Fishermen, sophomores Leticia Cervantes and Raven Rogers will compete, with Rogers having one year of wrestling experience. Sophomore boys with one year of wrestling include Cody Wright, Corbin Sutherland, Kento Thompson and Mike Warner. Those new to the program include Austin Robertson, Ben Lopez, Jesse Jetland, Marcus Cox and Tyler Miklos.

The Fishermen finished fourth in the Trico League sub-regionals last season and were ninth at regionals in District IV. The wrestling map has changed in the region significantly since then. Winlock, who finished next to last, moved down to the 2B level, and Ridgefield in the Trico and Elma and Hoquiam in the Evergreen League have moved in.

Castle Rock, Stevenson and LaCenter should again be atop the Trico. Perennial powerhouse and defending regional champ Montesano will give Elma and Hoquiam a run for number one in the Evergreen League.

That's the bad news; the good news is that Ilwaco boys will be competing for one of five state invitations this season, up from four in 2009. The girls will compete in a separate regional tournament with District III and only the top four finishers will go to state.

Look for Odneal, Short, Poe, Sutherland, Bautista and others to do well at regionals and don't be surprised if Cervantes and Rogers win their way to the Tacoma Dome, as well. Official weigh-in for the WIAA's weight management program was Nov. 30. There are 14 boys' and 10 girls' weight divisions.

Bills fans welcome home team after loss to the Chiefs