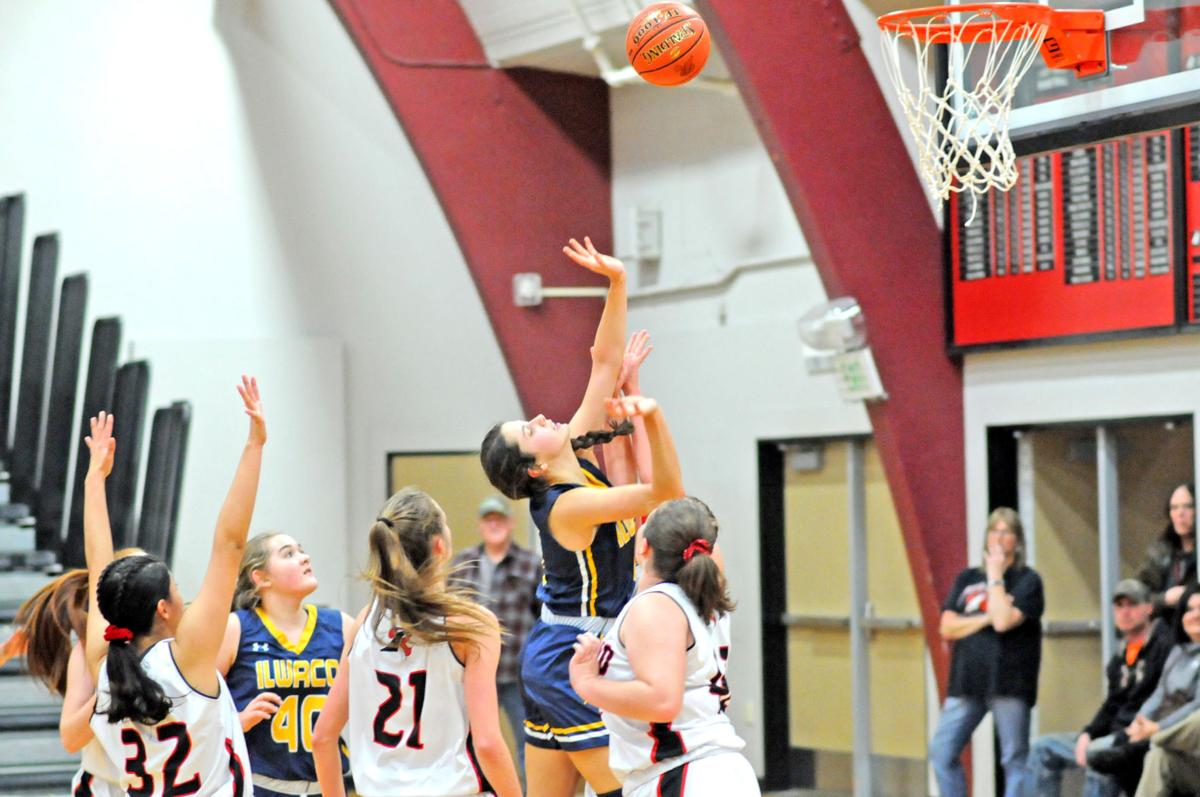 Erika Glenn puts up a shot in traffic. 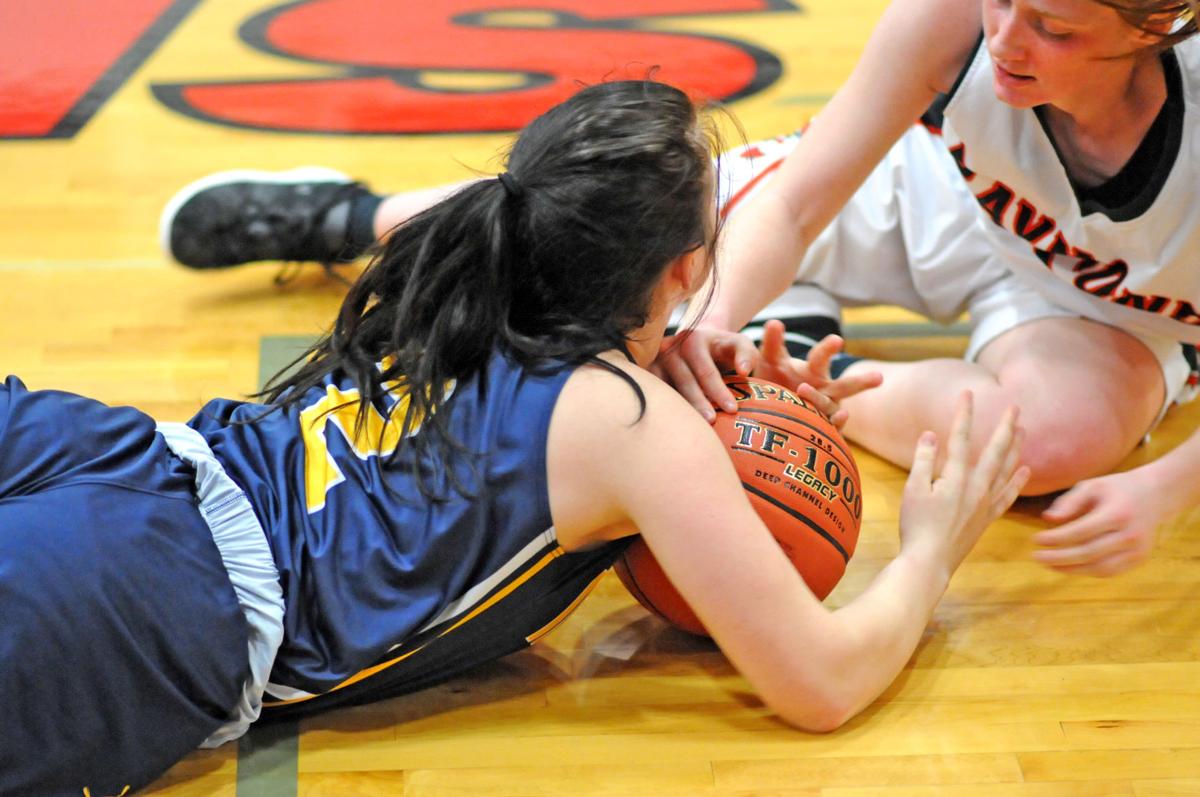 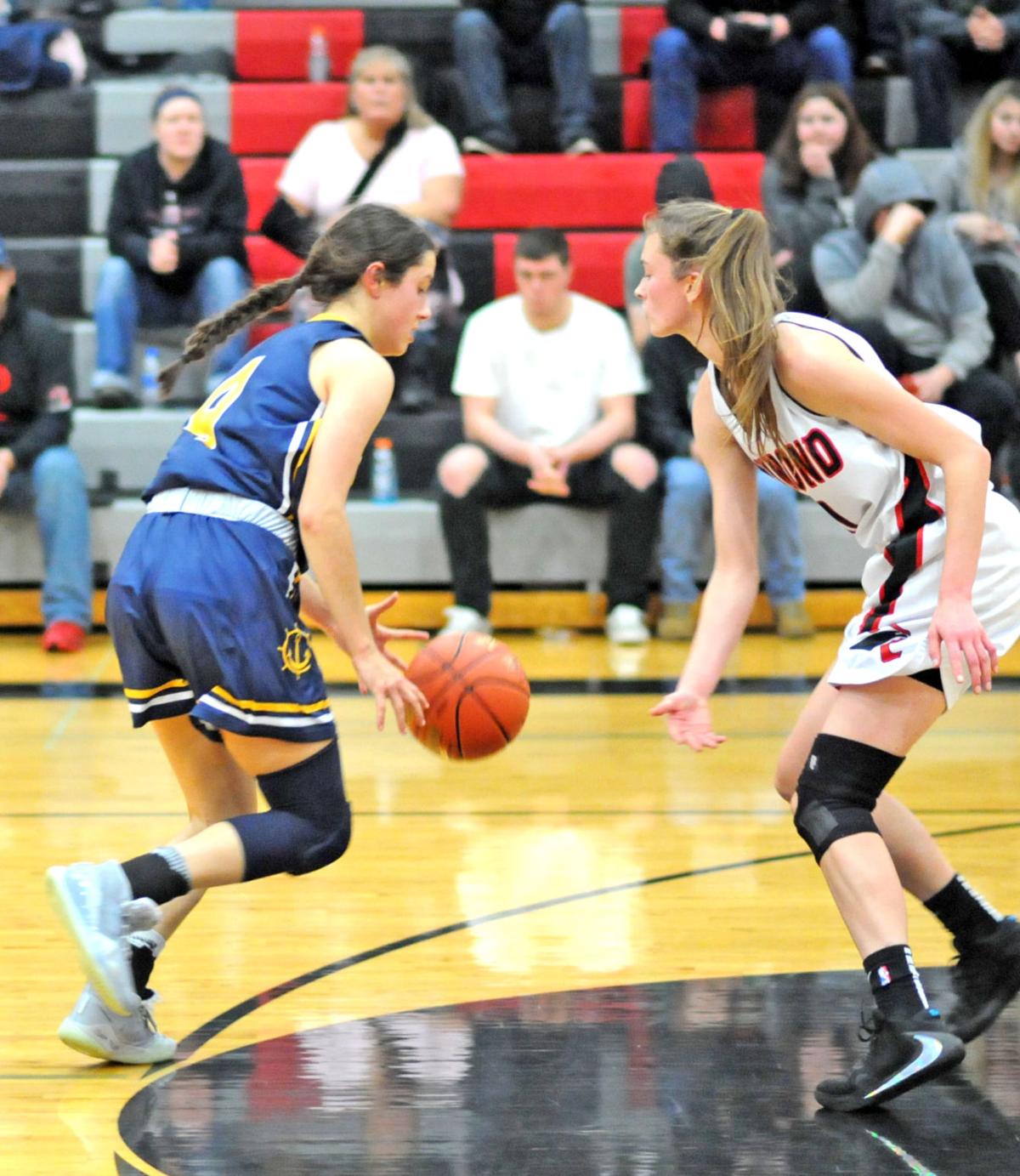 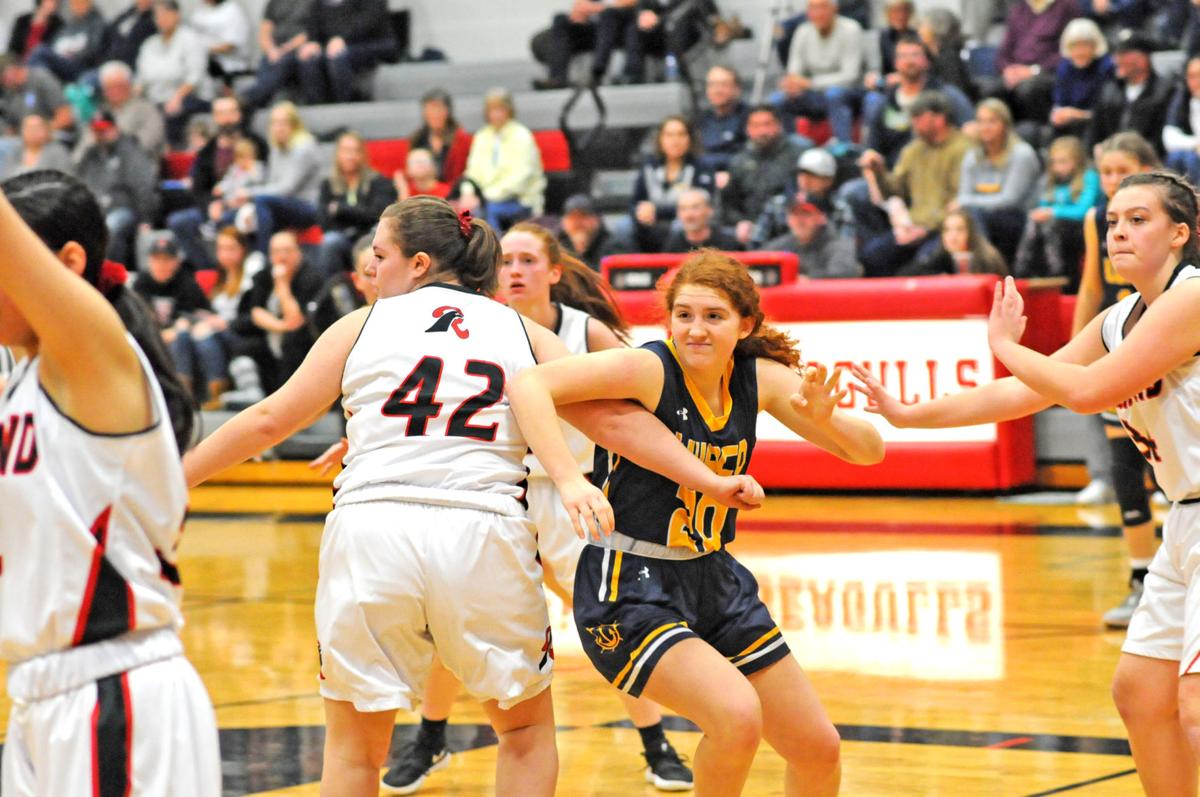 Raymond's Sidney Swogger (no. 42) sticks her arm out seeking to deny Ilwaco's Sunny Kemmer (no. 20) position in the post; Kemmer uses her body to pin Swogger's arm back while holding her hands up to indicate she is not committing a foul. 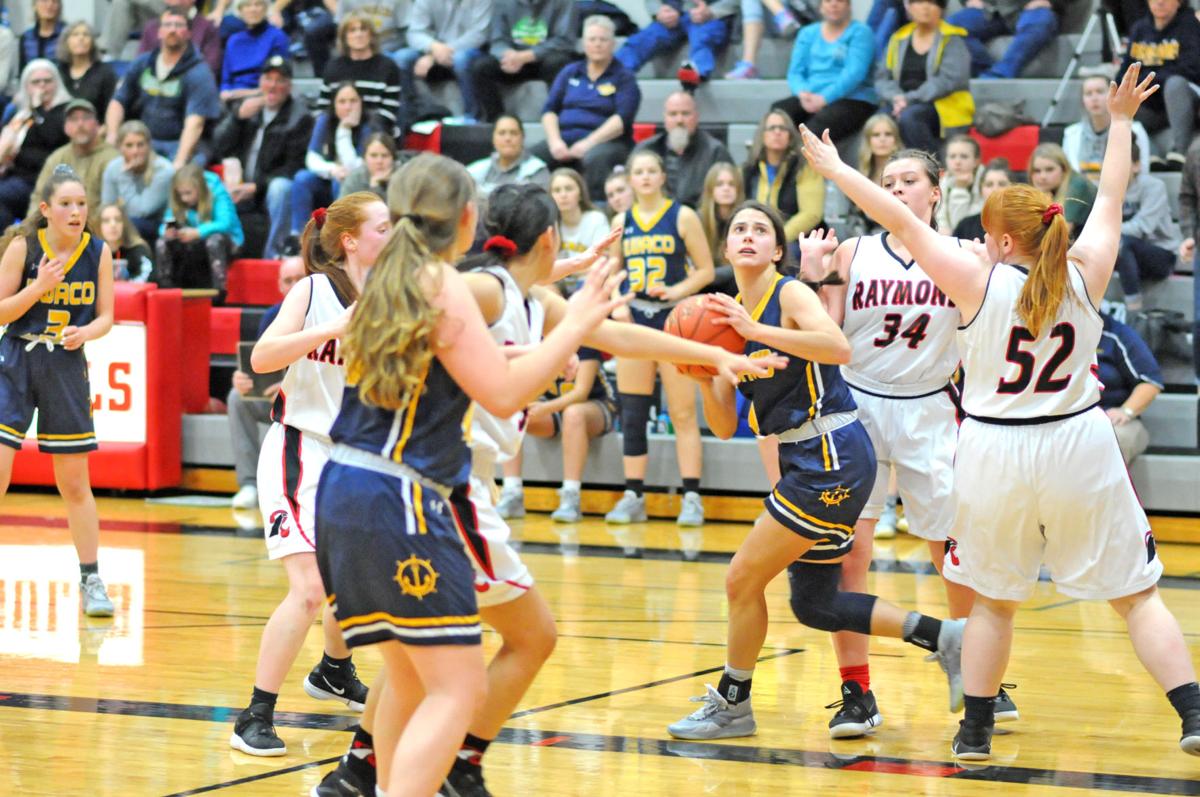 Erika Glenn seeks a path around a swarm of Raymond defenders. 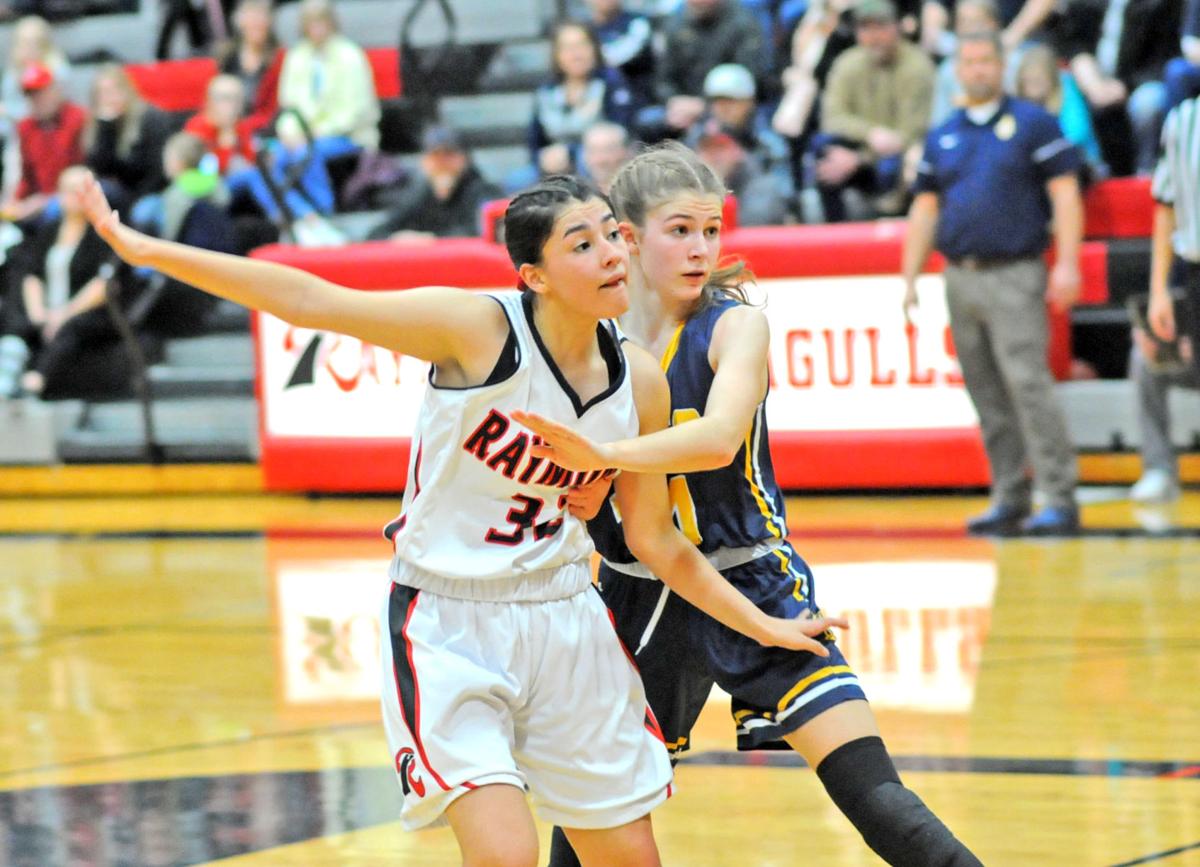 Erika Glenn puts up a shot in traffic.

Raymond's Sidney Swogger (no. 42) sticks her arm out seeking to deny Ilwaco's Sunny Kemmer (no. 20) position in the post; Kemmer uses her body to pin Swogger's arm back while holding her hands up to indicate she is not committing a foul.

Erika Glenn seeks a path around a swarm of Raymond defenders.

RAYMOND — Erika Glenn had 23 points and 13 rebounds, Kaytlenn Whelden had five steals, and Kylie Gray grabbed 16 rebounds as Ilwaco rebounded from its first loss of the season to take down previously unbeaten Raymond 49-35 in a battle for first place in the Pacific League. Kyra Gardner scored 18 points for the Seagulls, who were tied with Ilwaco at 27 at halftime in the Friday, Jan. 3 contest.

Ilwaco was coming off a 45-29 loss to Toledo and faced a similarly tough test against Raymond. The Seagulls swarmed whenever Ilwaco got the ball near the basket. They allowed a few open mid-range looks at the price of furiously contesting everything else.

“They took away a lot of three-pointers and drives,” Whelden said.

Glenn started the game defending Gardner, the sophomore sensation who had led Raymond to an 8-0 start.

But Whelden took over on her during long stretches, allowing Glenn to conserve energy.

Knowing Gardner is a threat as a driver and shooter, Whelden tried to anticipate her actions.

“When she was higher, I’d step back a bit, but when she came closer [to the three-point arc] I went up on her,” Whelden said.

“I wanted to not have Erika work so hard, even though she likes to, I wanted to free her up to do more on offense,” Coach Ned Bittner said. “Kaytlenn is a physical, strong player.”

Meanwhile, Gardner guarded Glenn most of the night.

“She’s long and lanky, and that makes passing harder than usual,” Glenn said. “But I just played my game. Whatever she did, I reacted.”

While Raymond played stingy half-court defense, Glenn found success forcing the pace. With Ilwaco trailing 6-1, Glenn sparked a 10-0 run with eight points and an assist, all coming in transition or semi-transition.

The Lady Gulls countered with an 11-1 run, but Ilwaco chipped away to tie it at 27 at the half.

Gardner’s step-back three-pointer early in the third gave Raymond its last lead at 31-30.

Ilwaco took the lead for good with around five minutes to go in the quarter. Estella Sheldon drew a foul in the post, and hit one of two free throws. Sunny Kemmer rebounded her miss, leading to a Tianna Ramsey jumper for the 33-31 Ilwaco lead.

The visitors continued scrounging for points against the tight Raymond defense. Olivia McKinstry scored through contact. Whelden pulled up and hit a 16-footer at the third-quarter buzzer for a 40-35 lead going into the fourth. McKinstry, surrounded near the basket, found Kemmer, who nailed the open 12-footer.

Whelden followed with a loose ball steal and passed ahead to Glenn. Gardner’s defense slowed her down, but she maneuvered to the basket, scored on a continuation play through a foul, and completed the three-point play for a 45-35 lead with 4:52 to go.

The Seagulls did not score in the fourth quarter. Ilwaco switched to a 2-3 zone at the beginning of the quarter, forcing them to put up jump shots.

“We switched to the zone when we got in foul trouble, and I think it took them off their game a little bit,” Bittner said.