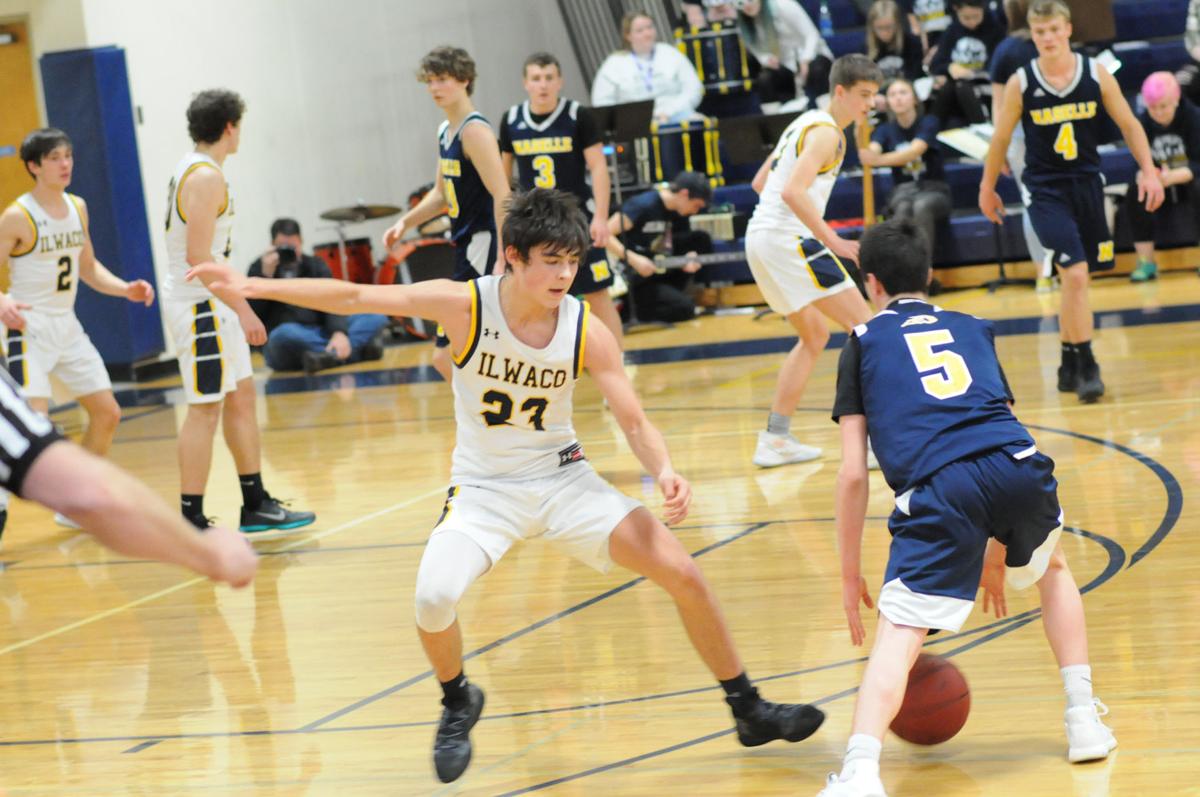 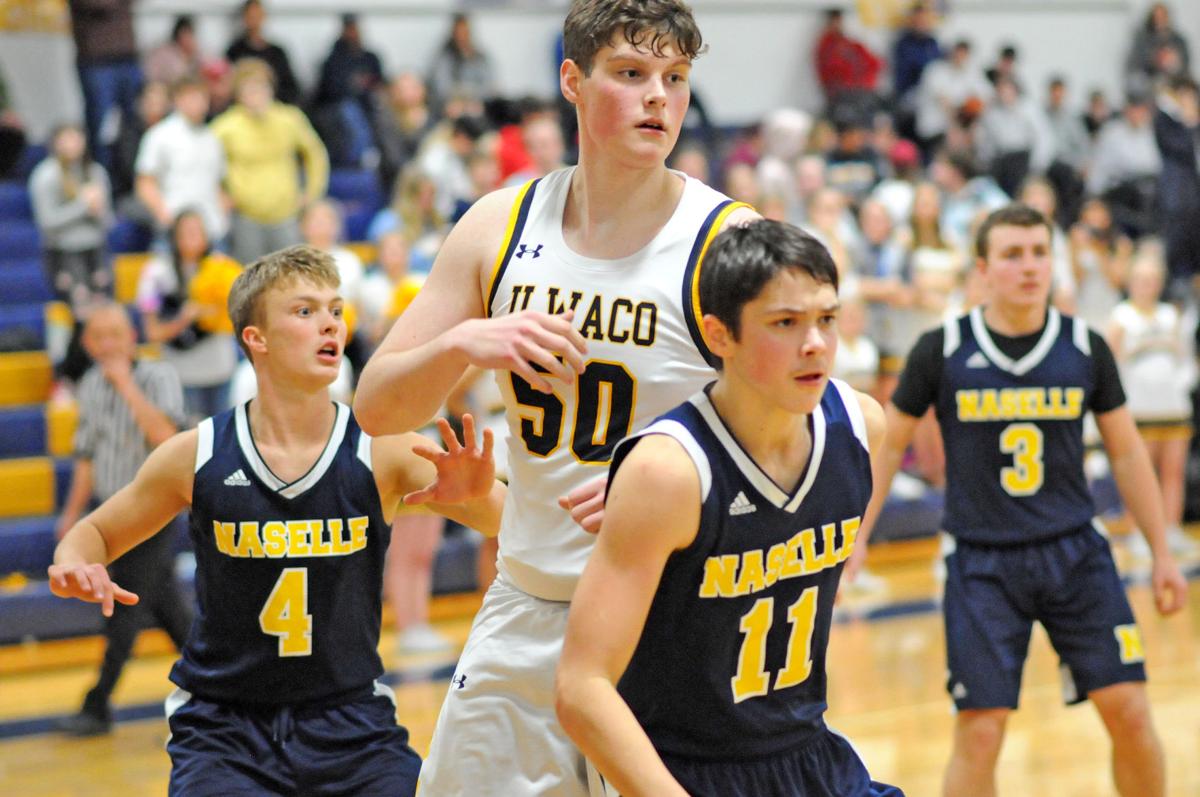 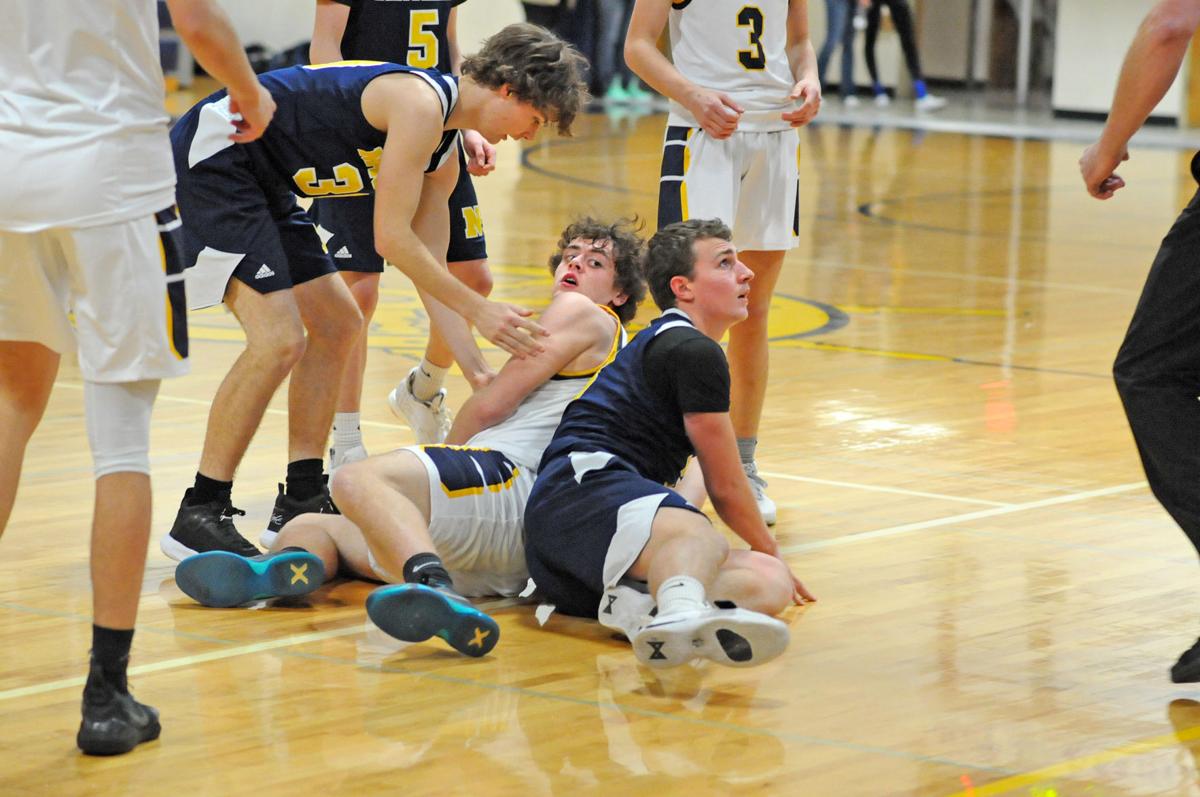 Corey Gregory (left) and Bubba Douglas (middle, on floor), after a tie-up that led to a jump ball. Jimmy Strange (right, on floor) was also involved in the scramble for the ball. 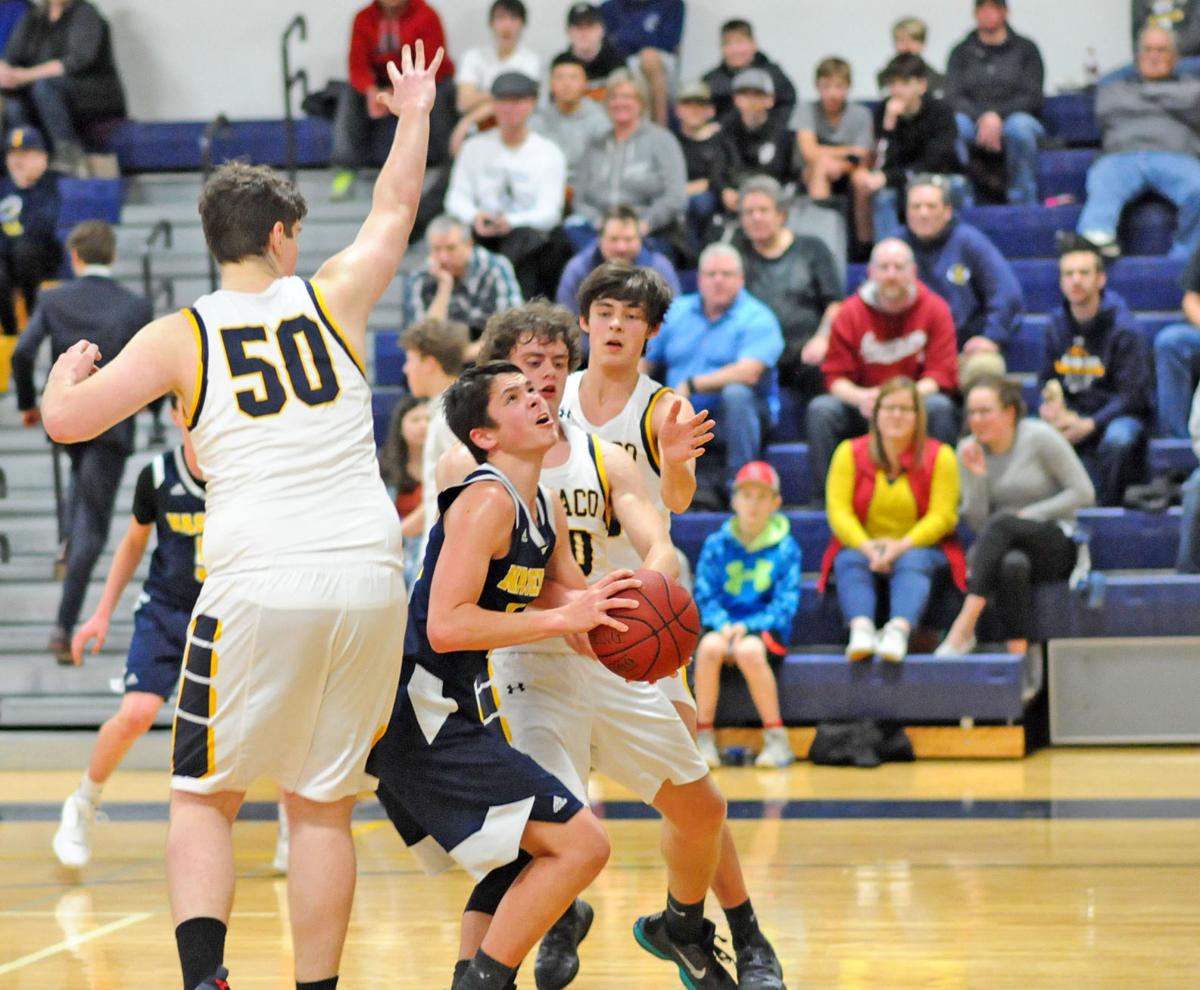 Chase Haataia maneuvers against Joe Nisbett (left) and Bubba Douglas, while Parker Kaech looks to help out on defense. 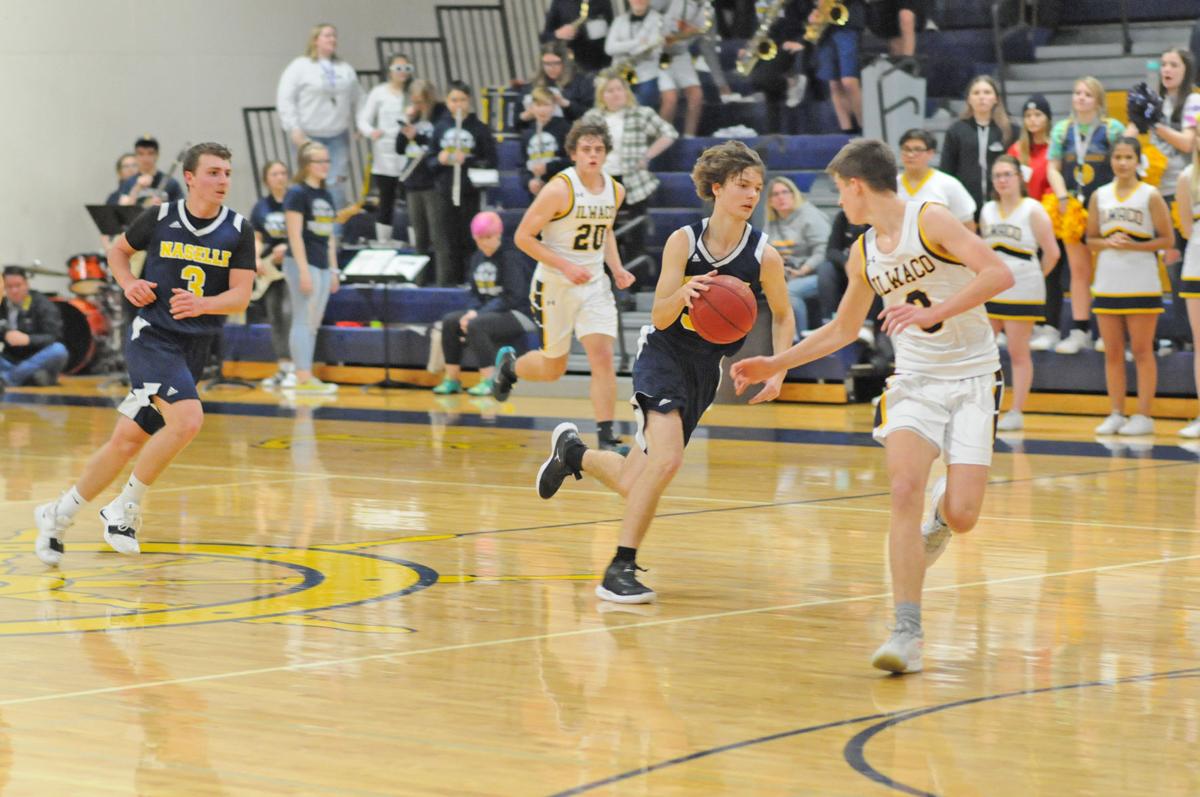 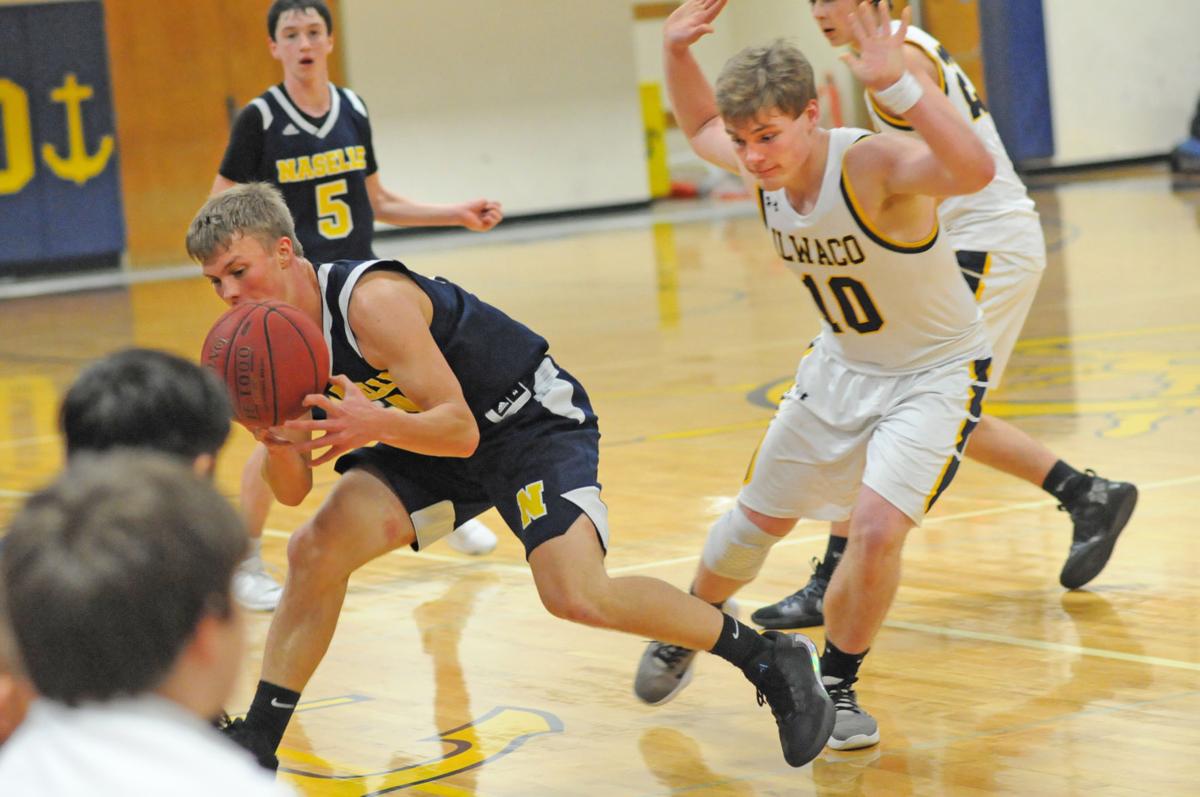 Calvin Baze pulls back his hands to avoid a foul of Ethan Lindstrom. 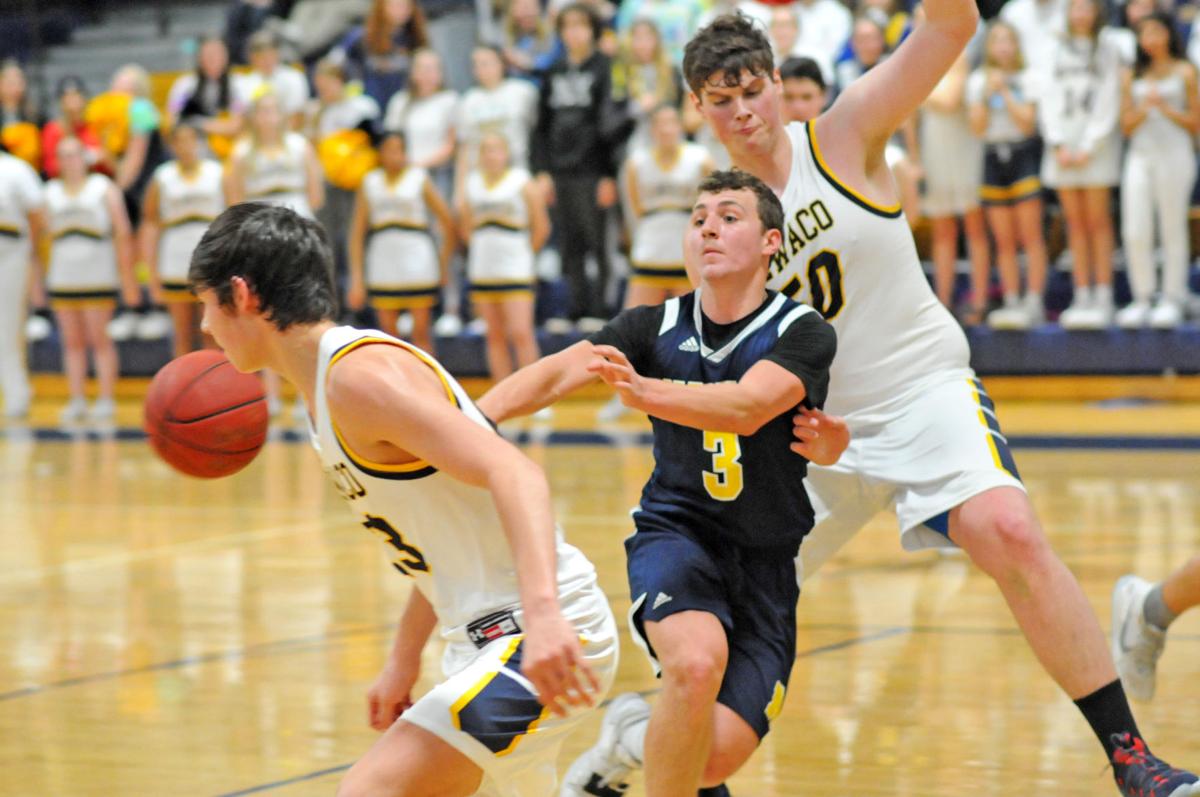 Corey Gregory (left) and Bubba Douglas (middle, on floor), after a tie-up that led to a jump ball. Jimmy Strange (right, on floor) was also involved in the scramble for the ball.

Chase Haataia maneuvers against Joe Nisbett (left) and Bubba Douglas, while Parker Kaech looks to help out on defense.

Calvin Baze pulls back his hands to avoid a foul of Ethan Lindstrom.

ILWACO — Parker Kaech lifted Ilwaco to victory in the fourth quarter, scoring 11 points as Ilwaco outscored Naselle 22-9 in the period for a 64-56 comeback win Thursday, Jan. 16.

But for much of the game, Kaech’s contributions were bigger on defense than on offense. Ilwaco put Kaech, the 6’2” forward, on Naselle’s instigator, 5’8” point guard Kolby Glenn. His arm length and ultra-quick reactions made him well-suited to match up with Glenn. Ilwaco hit three first-quarter three-pointers and Joe Nisbett was overpowering inside as Ilwaco took a 21-12 lead by the early second quarter.

Glenn brought the Comets back with 11 second-quarter points. He hit two threes, including a falling-down step-back three over Kaech, then hit a pair of free throws when he caught Kaech reaching around a screen to draw a shooting foul.

Glenn also scored three points on technical fouls in the quarter, which contributed to the Comets’ comeback. With Ilwaco ahead 27-20, Daniel Whiting was fouled on a fast break, a bump that forced him out of bounds. But the call came slightly late and, not realizing he would get it, Whiting slammed the ball in frustration, giving Glenn technical free throws and the Comets possession. Later, Whiting grappled for a rebound with Warren Wirkkala, shoving Wirkkala the instant after he yanked the ball away, for his second technical and an ejection.

Ilwaco clung to a 29-28 lead at halftime, with Nisbett scoring 11 first-half points.

Kaech, being occupied guarding Glenn, may have opened things up for Jimmy Strange. Strange took over as the primary ball-handler during much of the third quarter and got to the basket consistently. Out of half-time, he drove off a Chase Haataia screen, made a layup while being fouled and converted the three-point play for a 31-29 lead. Strange scored seven points in the quarter. As was the case against a highly-regarded Knappa team in the Comets’ previous game, the junior wing was Naselle’s most successful slasher.

“The first couple of games, he wasn’t getting the ball as much,” Glenn said. “After a while, teams started focusing on other guys and forgot about him.”

With 44 seconds in the third, Ethan Lindstrom hit a fade-away shot. At the other end he snagged a rebound, then made an outlet pass to Haataia, who converted a three-point play to give him eight points in the quarter. That capped a 9-0 run and gave Naselle a 47-42 lead after three.

Ilwaco was getting the ball inside to Nisbett less, though he did have four points in the quarter. Naselle at times was shading its defense away from weakside corner and toward the 6’9” star.

“We were staying in front and keeping someone behind him, just trying to make him look like he’s unopen for a pass,” Lindstrom said.

“The difference between the third and fourth quarter was we started recognizing what defense they were in,” Ilwaco coach Tim Harrell said. “They kept changing their defenses, and we had a tough time adjusting.”

With Ilwaco trailing 49-44 just inside six minutes to go, Kaech started taking over. His fade-away jumper cut the lead to three. Kaech hit a pair of free throws off a blocking foul, then pulled up on a baseline drive for a ten-footer to give Ilwaco the 50-49 lead with 3:56 to go.

Strange responded with a driving layup to regain the lead for Naselle. Kaech answered back with a three from the corner. Strange went back on the attack, got fouled, and hit one of two free throws, cutting the Fishermen lead to 53-52 with 3:15 left.

After that, Ilwaco solidified its lead. Nisbett scored on a press-break. Strange, back on the attack, lost the ball in traffic. Kaech scored on a dazzling step-back for a 57-52 lead with 2:20 remaining. The Fishermen stretched the lead to 11 in the final minute and went on to win by eight.

For Ilwaco, Kaech led the way with 22 points, and Nisbett had 19. Strange led Naselle with 17 points, and Haataia added 14 points, including three three-pointers.

SOUTH BEND — Parker Kaech scored 16 of his 20 points in the first half, leading the way in Ilwaco’s 76-46 victory over South Bend Saturday, Jan. 18.

Calvin Baze piled on, scoring all 11 of his points in the third quarter. Freshman Alex West poured in 10 points off the bench. Bubba Douglas added 12 points.