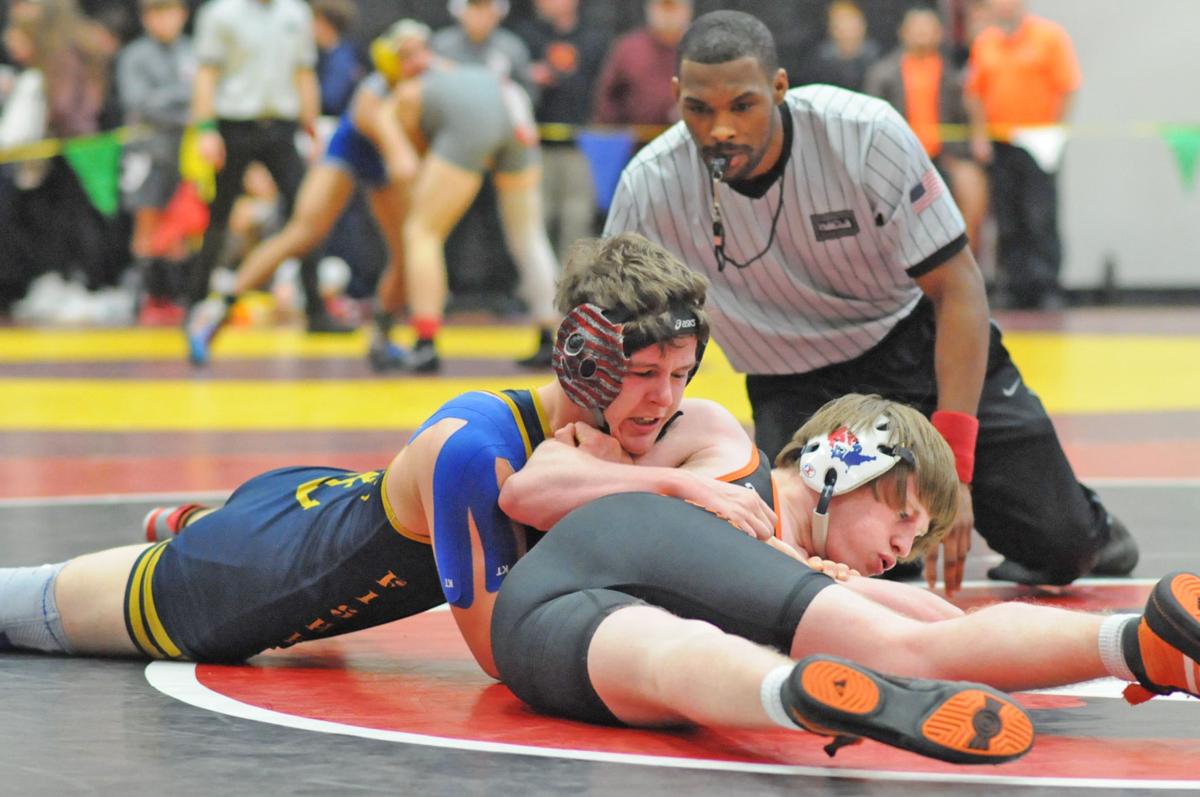 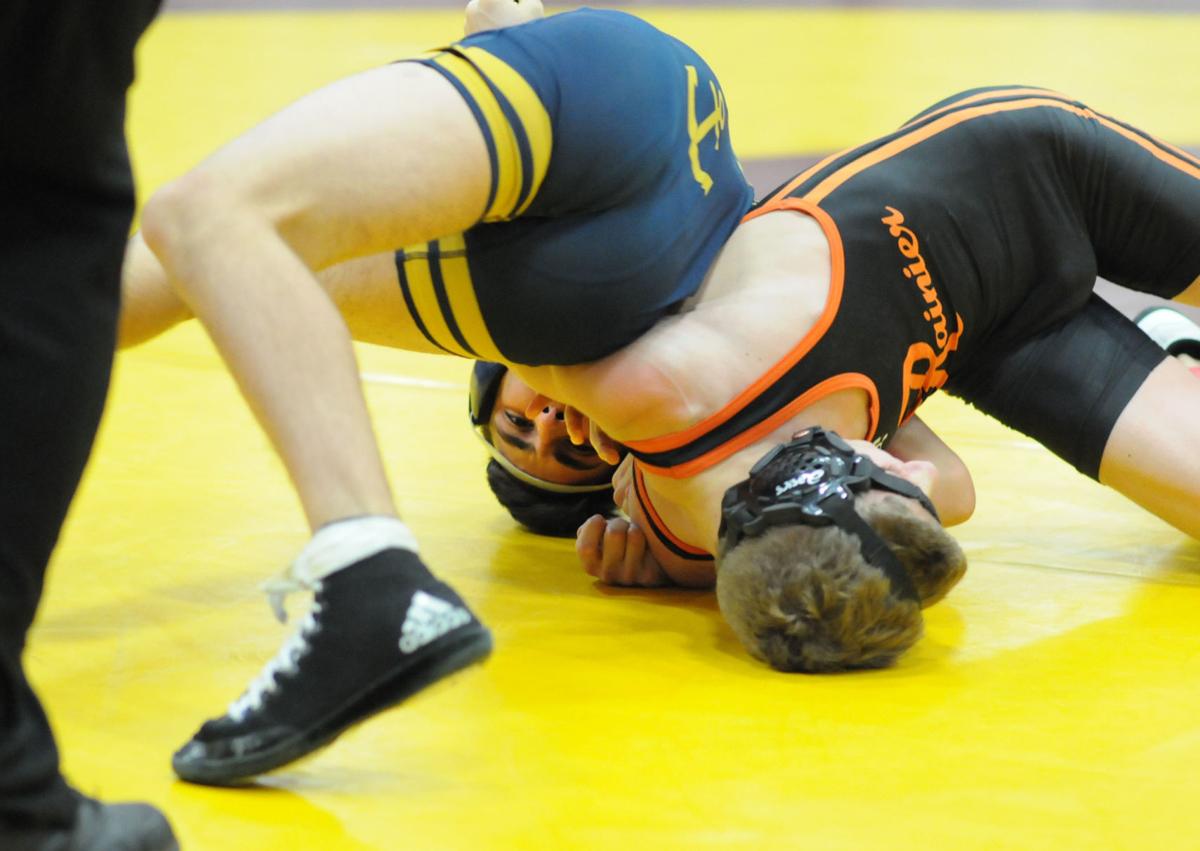 Ilwaco’s Malachi Taylor (left) contorts himself and pins Levi Swann’s arms behind his back in the 113-pound third-place match. 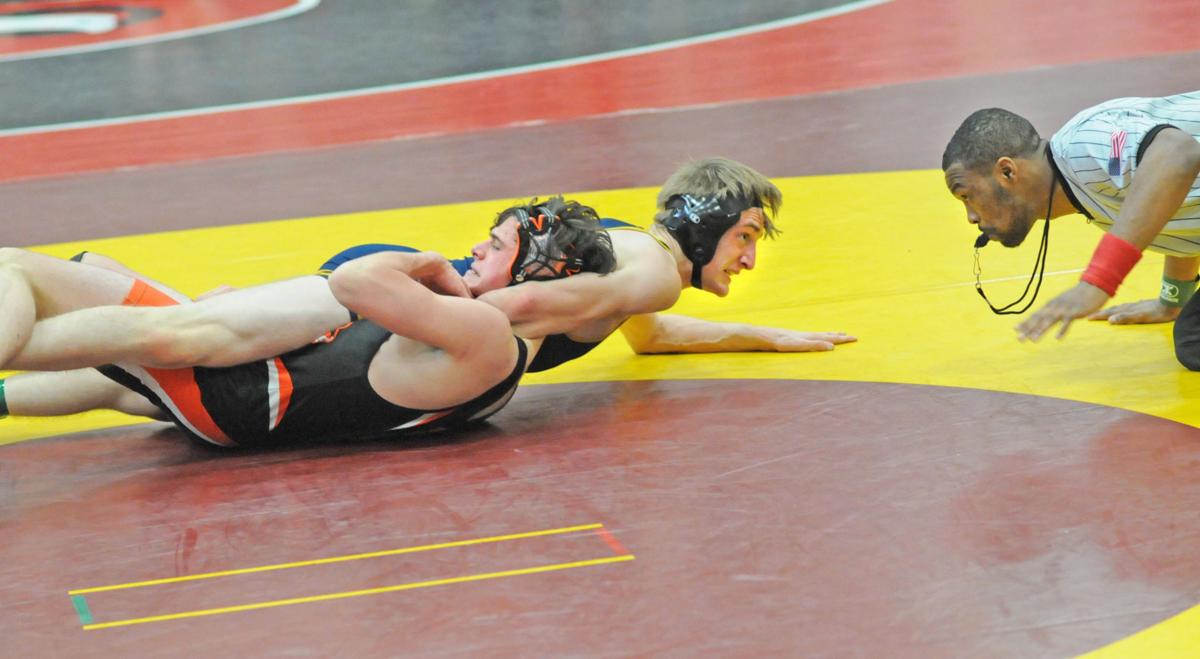 Chris Lake, on the verge of a pin of Napavine’s Dustin Krause. 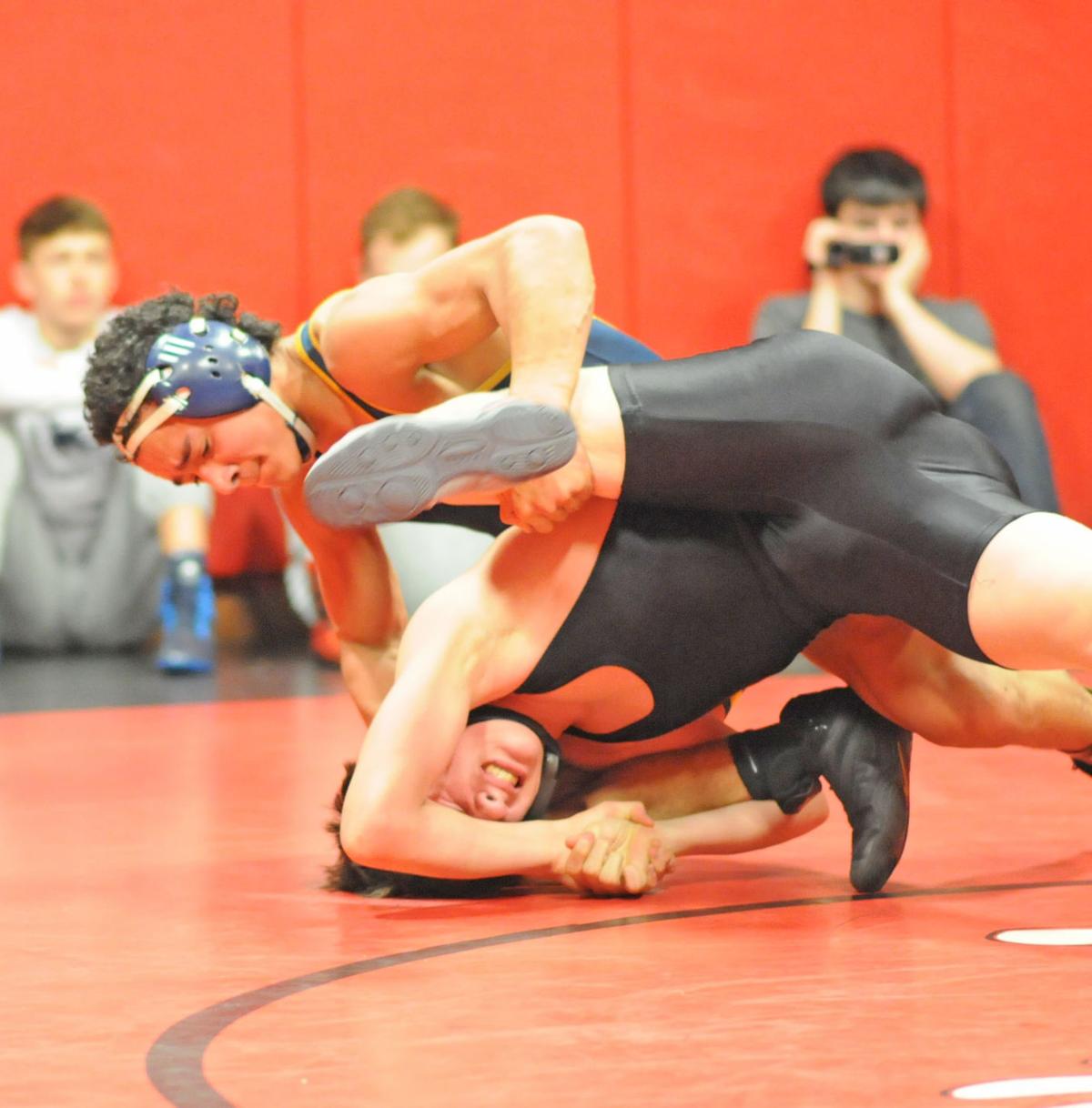 Keegan Kemmer pulls up on the leg of Adrian Hambly (Rainier), who keeps his own tight grip on Kemmer’s leg. 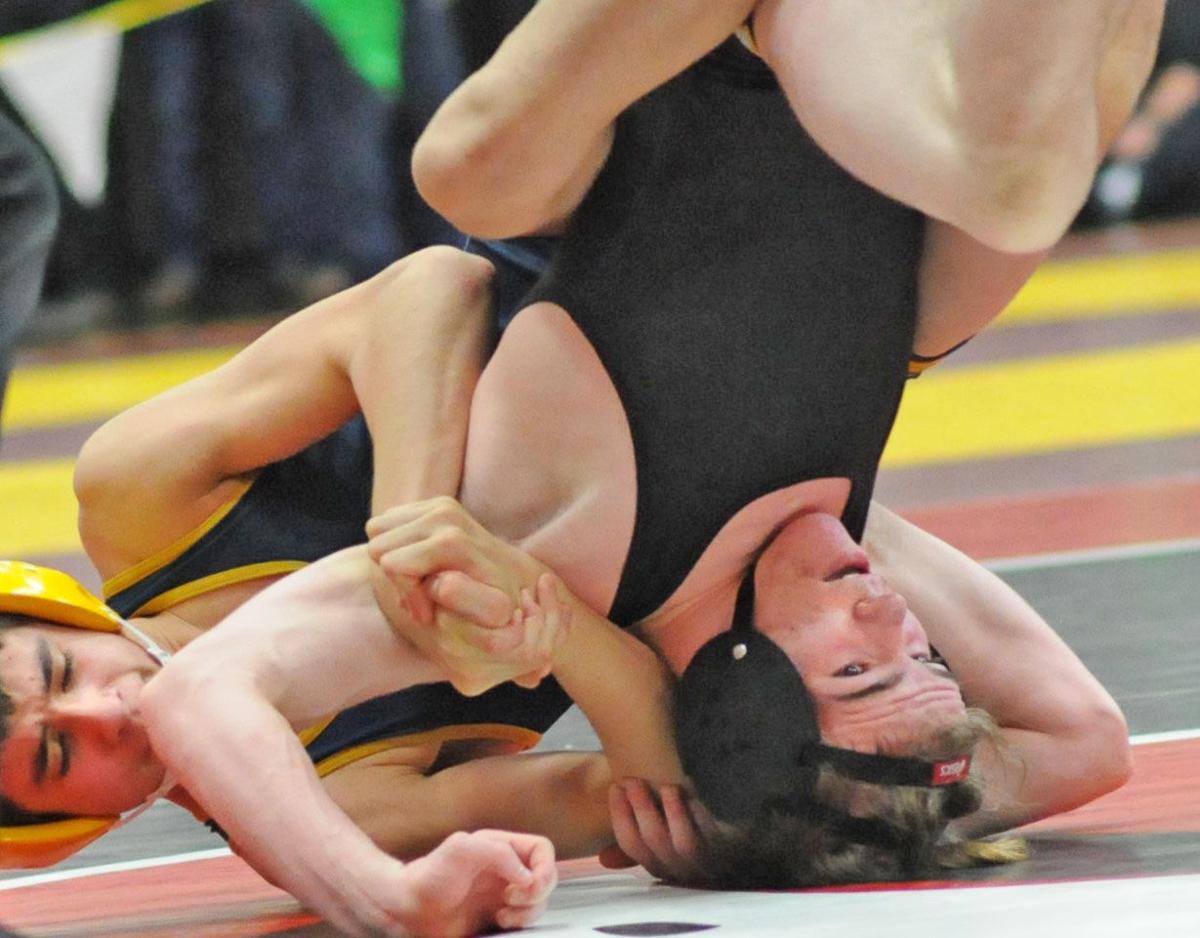 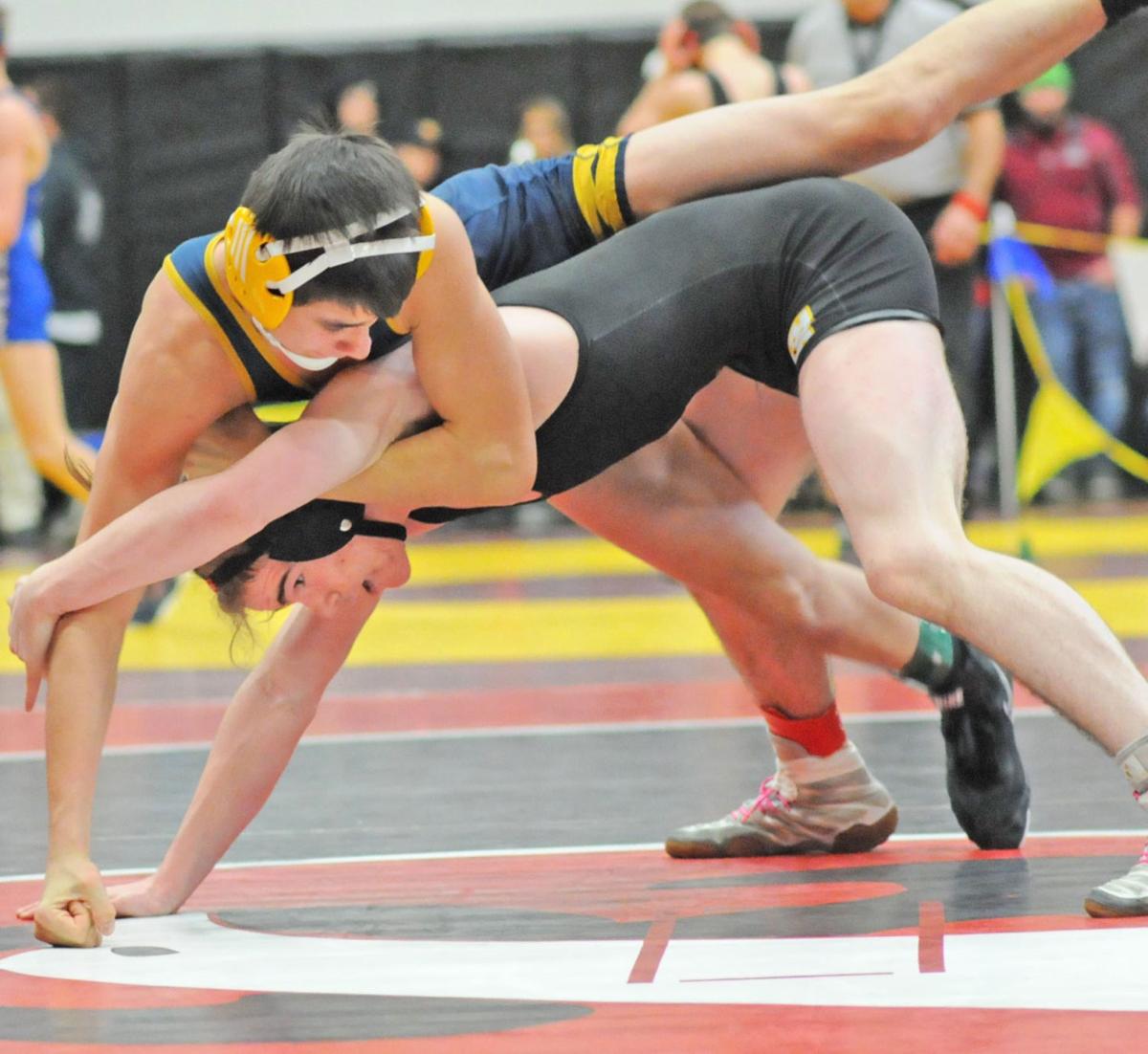 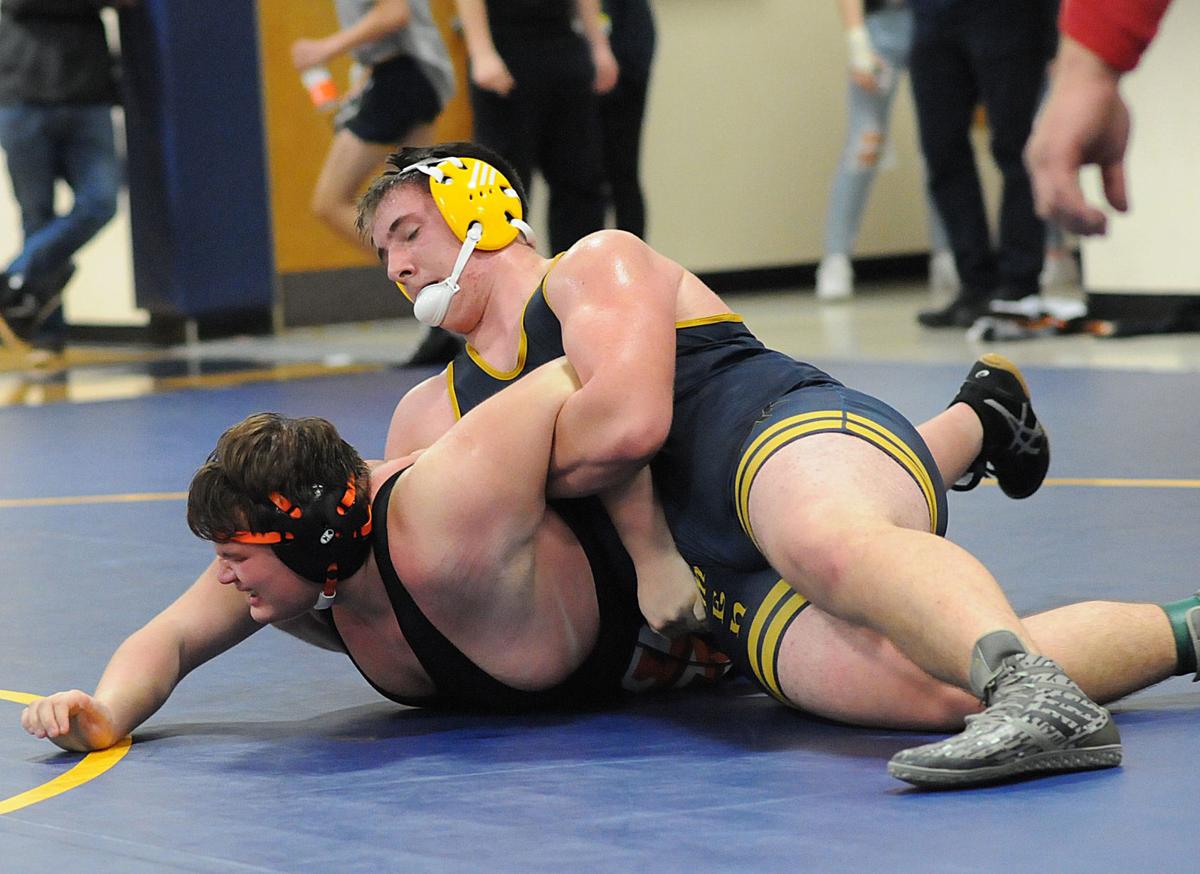 Michael Rodda controls the arm of a wrestler in a recent match.

Ilwaco’s Malachi Taylor (left) contorts himself and pins Levi Swann’s arms behind his back in the 113-pound third-place match.

Chris Lake, on the verge of a pin of Napavine’s Dustin Krause.

Keegan Kemmer pulls up on the leg of Adrian Hambly (Rainier), who keeps his own tight grip on Kemmer’s leg.

Michael Rodda controls the arm of a wrestler in a recent match.

RAYMOND — Ilwaco had four wrestlers reach finals and came out with four victories, capped by Michael Rodda dramatically turning around the day’s last match as teammates lined around the mat cheered him on.

Kemmer dominated his opponents and Auttelet won fairly comfortably, but Walker and Rodda each had a tough path to victory.

Rodda pinned teammate Bryan Sparks in semifinals, advancing to face Levi Woods. Woods took command of the match by tripping Rodda and taking a 5-0 lead after one round. Rodda twice took leg shots, but Woods countered both to add to his lead. Rodda was injured at one point but recovered during the injury timeout and fought on.

He still trailed 9-2 entering the final round. Teammates urged him on, insisting that Woods was tiring. Right away, Rodda took a leg shot, and this time Woods had no counter.

“He was just standing there,” Rodda said afterwards. “He was tired.”

Rodda took him down and quickly pinned him. After shaking hands, Rodda collapsed against the wall in exhaustion, with blood near his eye.

“I just saw him stick his leg forward, and I switched my legs to get my shot in,” Rodda said. “Then I just fell forward, and did what Coach taught me, climbed his back.”

Walker, top-seeded in the 120-pound bracket at 20-6, had byes through to semifinals but then ran up against Zariah DeBiaso of North Beach (16-9). On a very quick series of moves and countermoves between the talented light-weight wrestlers, DeBiaso came up with the first take-down to lead 2-0 after one round.

Walker started round two on top and, after a long struggle, got DeBiaso by the arm, leveraging it for a take-down and near-fall for a 4-2 lead after two.

Needing points, DeBiaso took a leg shot, and Walker took advantage by getting his head on top of him and bringing him down, increasing the lead to 6-2. DeBiaso got his legs on top of Walker, then took advantage when Walker went for a move, scoring a reversal. Leading by two and needing to avoid getting pinned, Walker started wrestling conservatively, so much so that the referee called him for a stall. He still held on for the 6-5 win.

In finals against South Bend’s Max Crow (19-11), Walker fell behind 4-0 early on. Crow led 6-3 late in the first round, but Walker pulled Crow’s hands apart for an escape in the final seconds, cutting the lead to two.

Walker was still down 8-6 late in the second round after committing a choking violation. But Walker again picked up end-of-round points, pressing down on Crow’s head, then getting him by the arm to gain control and tie it at eight.

In round three, Walker took Crow down by the leg on another lightning-quick series of moves. This match, Walker remained aggressive to the end, repeatedly trying to pin Crow by leveraging his arm. Walker couldn’t get his pin, but Crow couldn’t get up, and Walker came out with the 10-8 win.

Kemmer had three lopsided victories: a 44-second pin of Lane Olsen (Onalaska), an 18-3 victory over Adrian Hambly (Rainier), and a 17-1 win over Trey Rego (Toledo).

Auttelet pinned teammate Cory Morrison in semifinals, then beat Julian Hambly (Rainier). Auttelet unlocked Hambly’s arms and used the momentum to gain control and a 2-0 lead after a round. After a hard-fought, scoreless second round, Auttelet started round three with a quick escape and went on to win 5-0.

Sparks, Aidyn Cohen-Tjaden (182 lb) and Malachi Taylor (113) all placed third to advance to Regionals. Trevor Hutson went 4-1 with three pins that took just 1:19 combined. He reached the third-place match in 160 against Levi Turner (Life Christian). That match didn’t happen at Raymond due to time constraints and so will take place at Regionals, though both have already guaranteed themselves a spot at Regionals proper. Morrison, Chris Lake and Jackson Wilkin were fourth. Dakota Shepard and Tanner Brasket were both fifth. All advance to Regionals. Henry McGarish, who took seventh, will be an alternate.

Ilwaco took first out of sixteen teams in points, beating Kalama 260 to 215.

Regionals will take place Saturday, Feb. 15 at Kalama at 8 a.m.