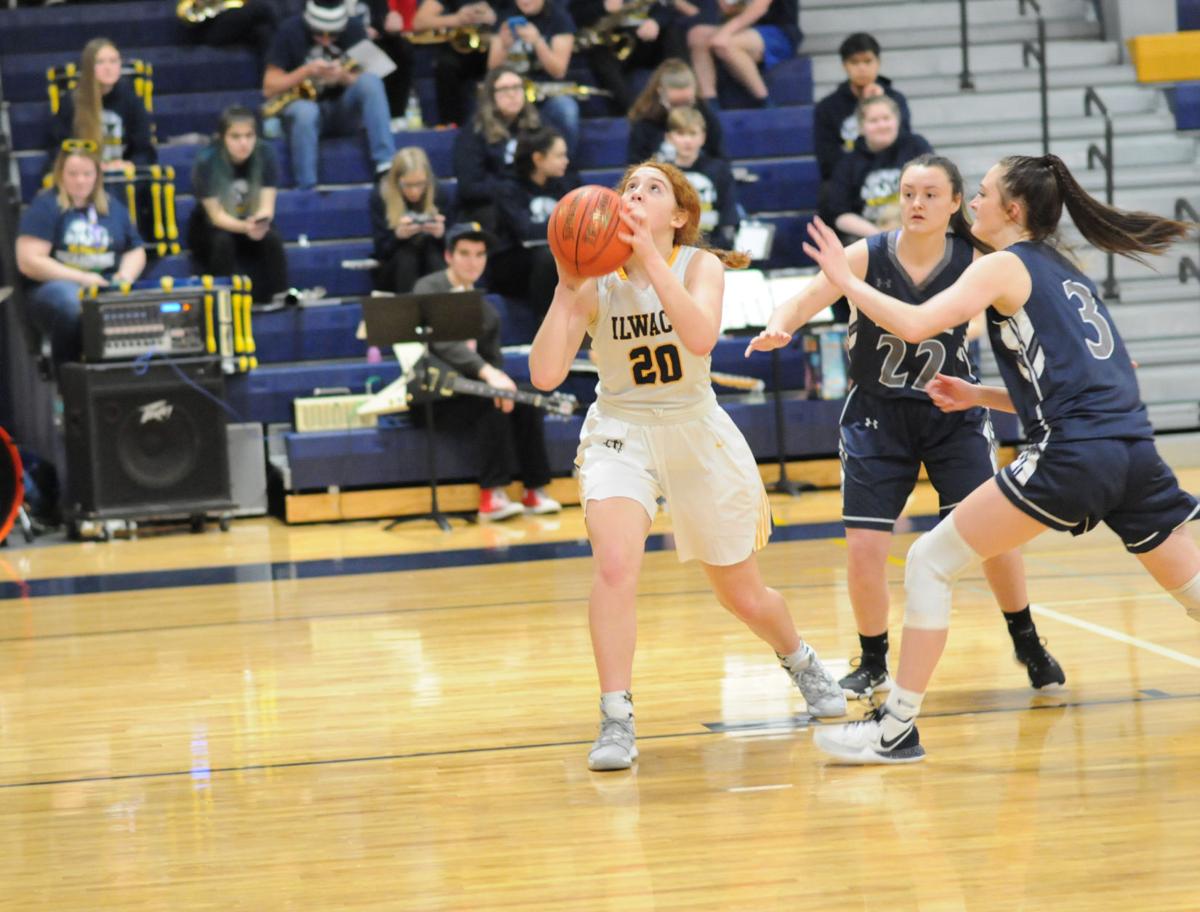 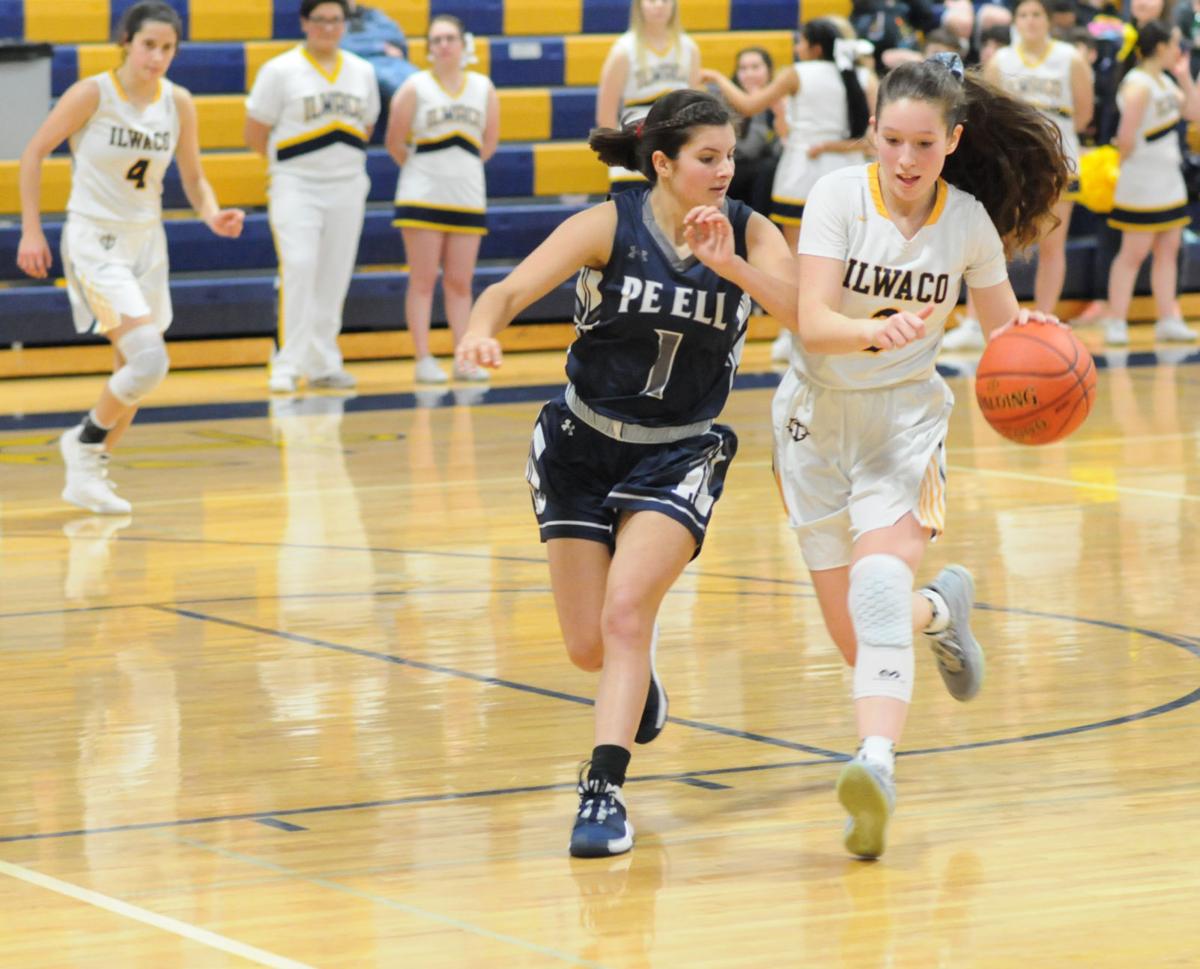 Tiana Ramsey dribbles near the key with Sadie Howard guarding her. 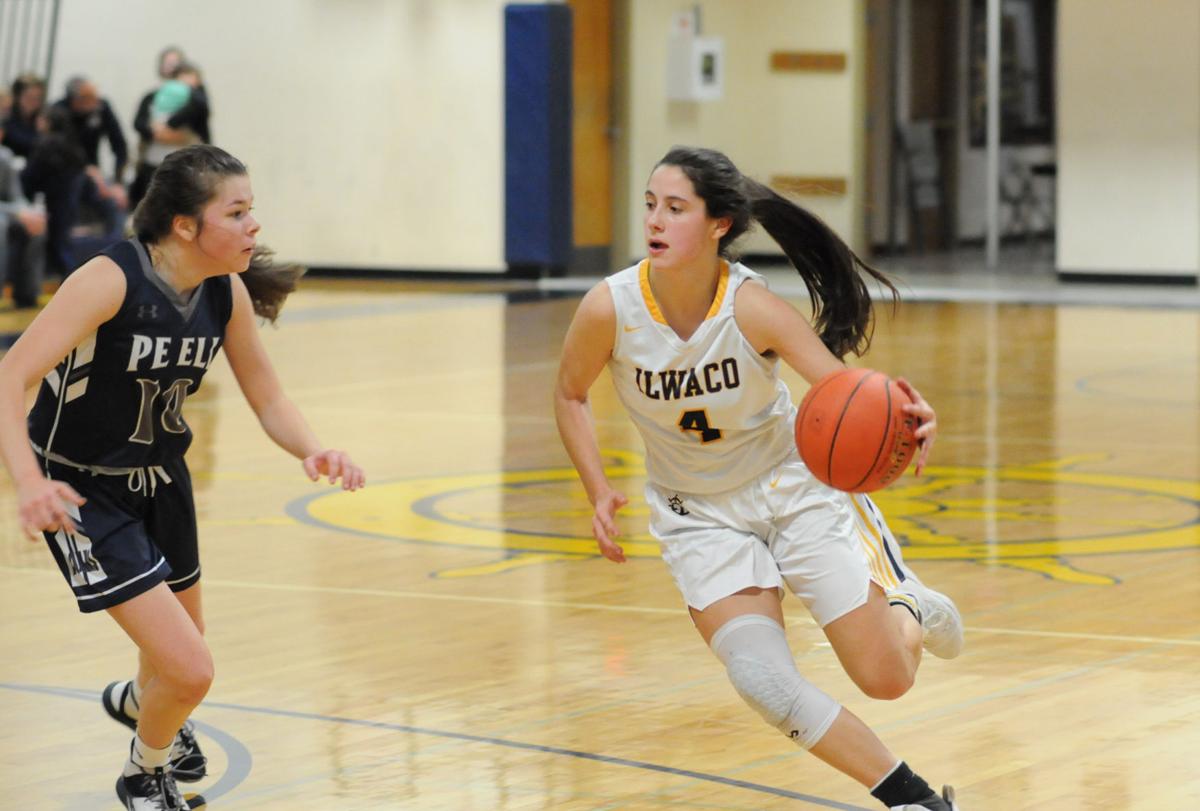 Erika Glenn turns the corner on a drive. Glenn scored her 1,000th career point in the victory. 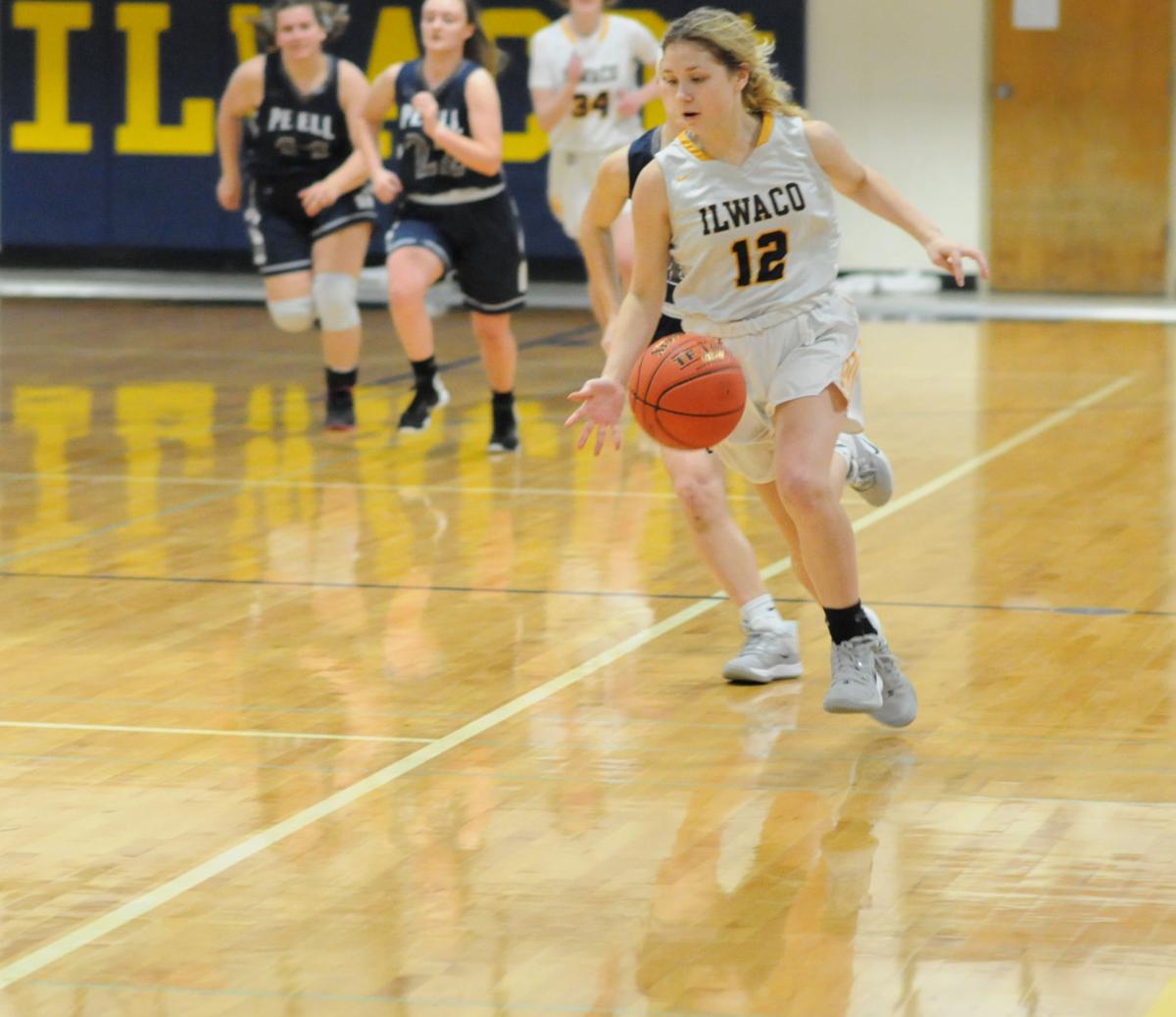 Gabby Bell takes off after a steal. The freshman got some varsity playing time against Pe Ell and had two assists. 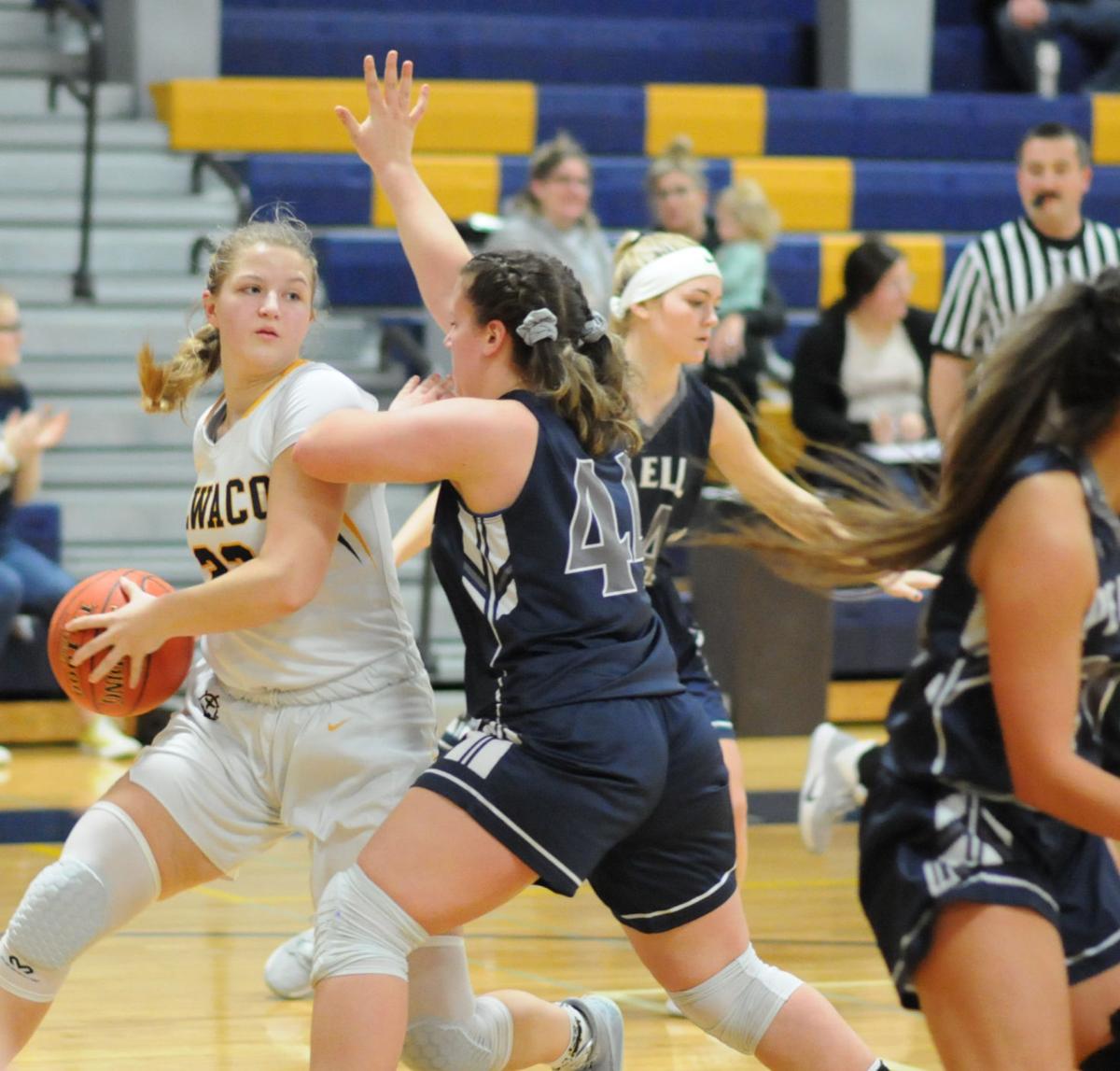 Tiana Ramsey dribbles near the key with Sadie Howard guarding her.

Erika Glenn turns the corner on a drive. Glenn scored her 1,000th career point in the victory.

Gabby Bell takes off after a steal. The freshman got some varsity playing time against Pe Ell and had two assists.

ILWACO — On a night when Erika Glenn scored her 1,000th career point, the Lady Fishermen remained in first place with a dominant victory over one of the Pacific League’s mid-tier teams, blowing out Pe Ell 69-13 Saturday, Jan. 25.

Kylie Gray had eight points on four-of-four shooting in the first four minutes to build Ilwaco’s early lead. Gray consistently got in position for easy baskets, and teammates found her. Glenn drove and fed her across the lane. Gray’s basket on a high-low pass from Olivia McKinstry made it 11-1 four minutes in.

Ilwaco used defense to generate this offense, stealing passes at half-court as the Trojans struggled against the press; McKinstry and Kaytlenn Whelden would each finish with six steals. Late in the quarter, the Trojans broke the press, but Maggie Jacobson blocked a layup attempt. Ilwaco led 18-5 after a quarter.

The Lady Fishermen built this lead with only two first-quarter points from Glenn, their top scorer. Glenn then piled on eight fast-break points in the opening minutes of the second quarter. She euro-stepped between two defenders for a basket, then gathered a loose ball and took it for a layup. Glenn hit two free throws when fouled on a hesitation dribble through traffic to reach the 1000 mark for her career. She followed with a put-back after a Tiana Ramsey steal to make it 26-5. Glenn had 14 points in the quarter and finished with 21, along with six assists. Ilwaco led 42-9 at halftime.

In a big night off the bench, McKinstry generated extra possessions for Ilwaco throughout the night, snatching six offensive rebounds to go with her six steals.

Once the win was secured, Ilwaco coach Ned Bittner emptied his bench. Sophomore Gabby Bell and freshman Zoey Zuern, who have both gotten some varsity playing time in recent weeks, came in briefly in the second quarter and played much of the fourth. Bell had two assists, and Zern scored six fourth-quarter points.