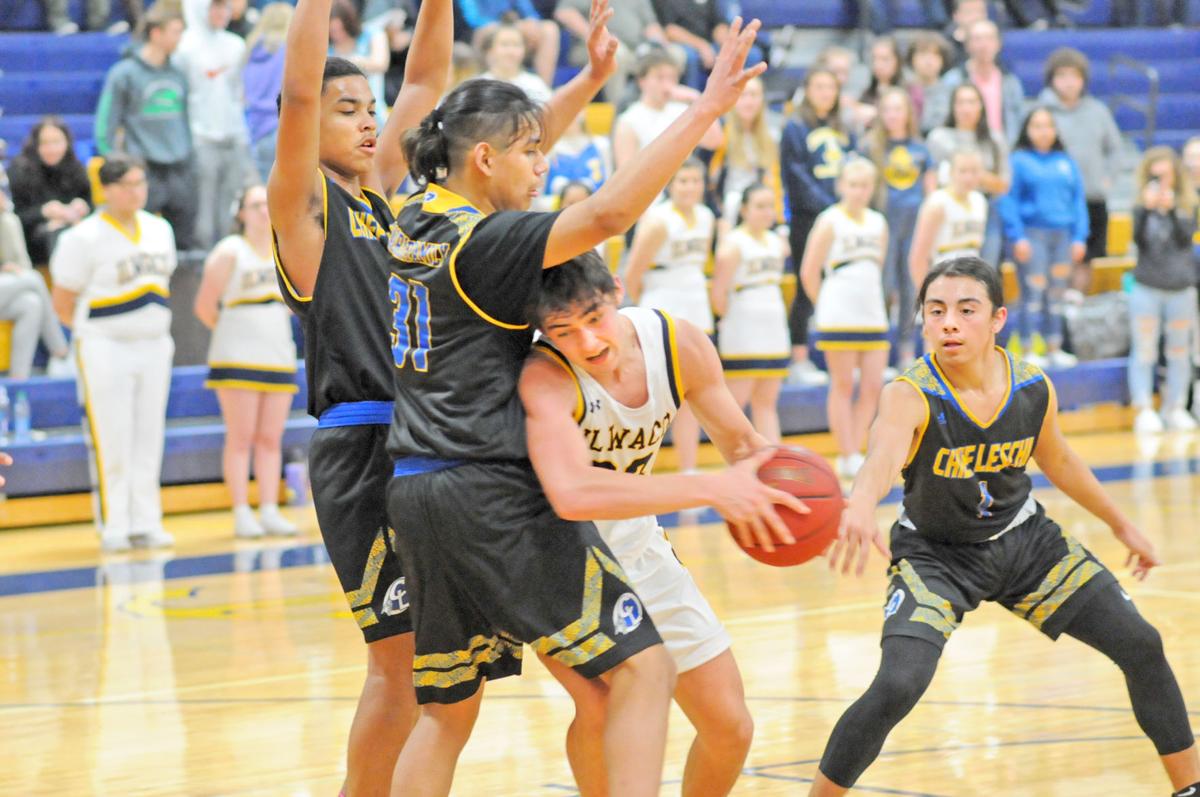 Parker Kaech maneuvers in the lane against Perry Joseph (left) and Justin James (middle) as Wakiyan Cuny tries to swipe the ball from behind. 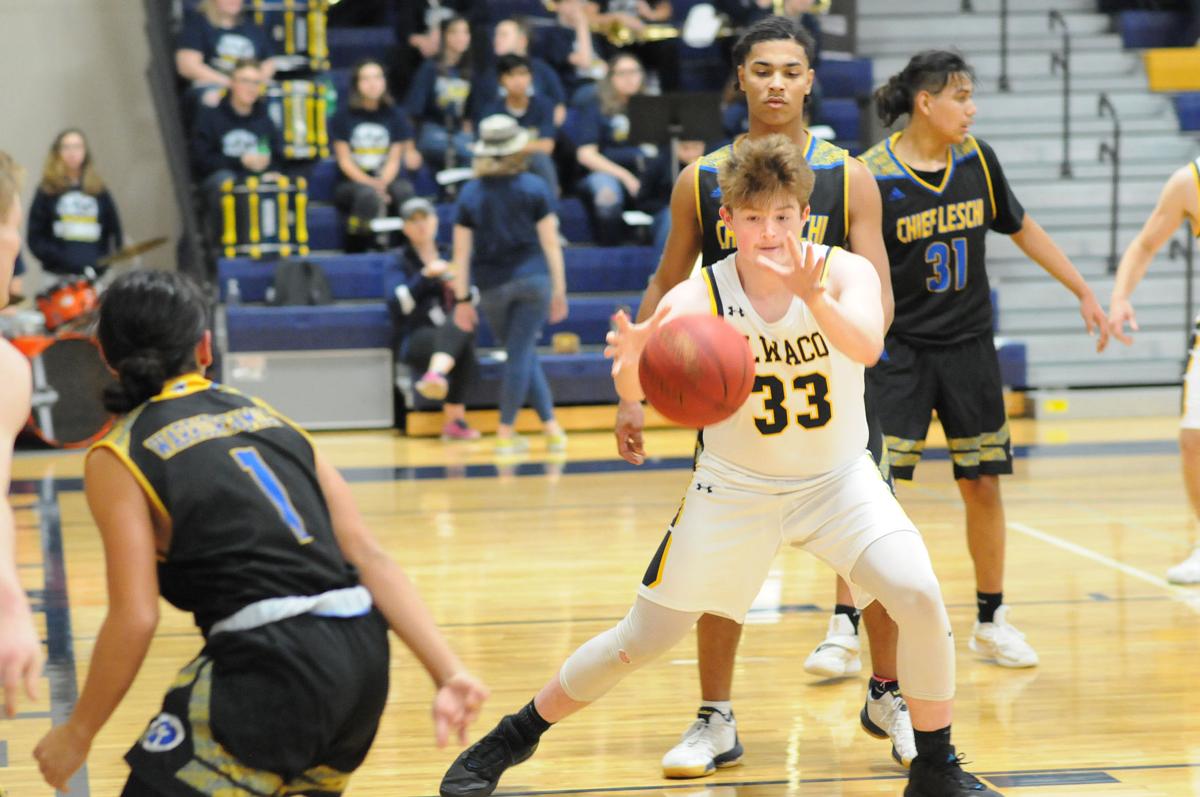 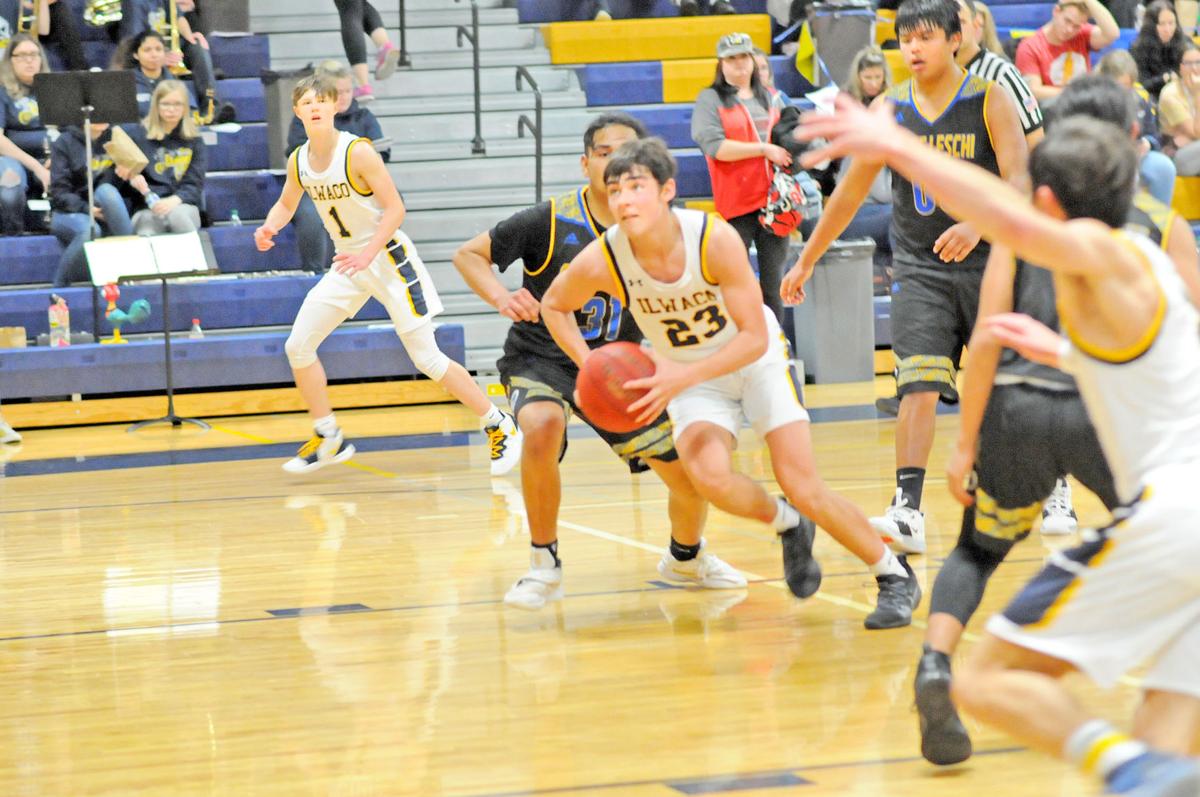 Parker Kaech drives down an open lane against Chief Leschi.

Parker Kaech maneuvers in the lane against Perry Joseph (left) and Justin James (middle) as Wakiyan Cuny tries to swipe the ball from behind.

Parker Kaech drives down an open lane against Chief Leschi.

ILWACO — Joe Nisbett scored 10 of his 17 points in the first quarter in Ilwaco’s 72-52 season-opening win over Chief Leschi Wednesday, Dec. 4.

The Fishermen looked for Nisbett in the low post, where he made spin moves right to the basket and hit his first five shots, including eight of the team’s first 12 points.

Ilwaco had leads of 10-0 and 14-3, but the Warriors got a pair of threes by Wakiyan Cuny and one by Kaheloosh Spirithawk in a span of a couple of minutes to cut it to 16-12. Damien Roy started getting easy looks inside, and Chief Leschi got within a point at 25-24 early in the second quarter.

Calvin Baze knocked down two three-pointers as Ilwaco closed out the half on a 12-2 run. During that stretch, Baze found Bubba Douglas open in the post for two points, followed by a steal-and-score by Daniel Whiting. Ilwaco led 42-29 at the half.

Throughout the night the Fishermen got inside scoring in their half-court offense, including from Parker Kaech, who showed some nifty post moves to complement his well-established perimeter game. But the team struggled in fast-break opportunities until the fourth quarter, when they used the fast break to stretch their lead. With Ilwaco ahead by nine, Alex West got a steal and found Whiting, who hit a layup through contact. Jaden Turner followed with a coast-to-coast layup. Baze poked the ball away and found Whiting on the break for a 60-45 lead with under five minutes remaining.

The Warriors never got closer than 13 the rest of the way. Turner’s baseline drive for a three-point play with 2:58 left, followed by a Whiting three-pointer, stretched the lead to 19 to put Chief Leschi away.

The Fishermen went ahead by six points on the defending league champs in the early going but fell behind by 12 in the first half. But Ilwaco cut the lead to two by halftime, and “it was neck-and-neck for most of the second half,” Ilwaco coach Tim Harrell said.

Ilwaco had a chance to set up a close finish. Late in the game, Ilwaco cut the lead to four and got out in transition after a defensive stop. Jaden Turner found freshman Alex West for an open three, which he made. But as he was about to shoot, officials whistled the play dead because of an injured Life Christian player back at the other end, Harrell said.

Harrell indicated that officials were calling a tight game, which made free throw shooting crucial. The Eagles were more accurate from the line, hitting 31 of 38 to Ilwaco’s 19 for 34.

Ilwaco fell to 1-1, while Life Christian improved to 2-0 in league play.