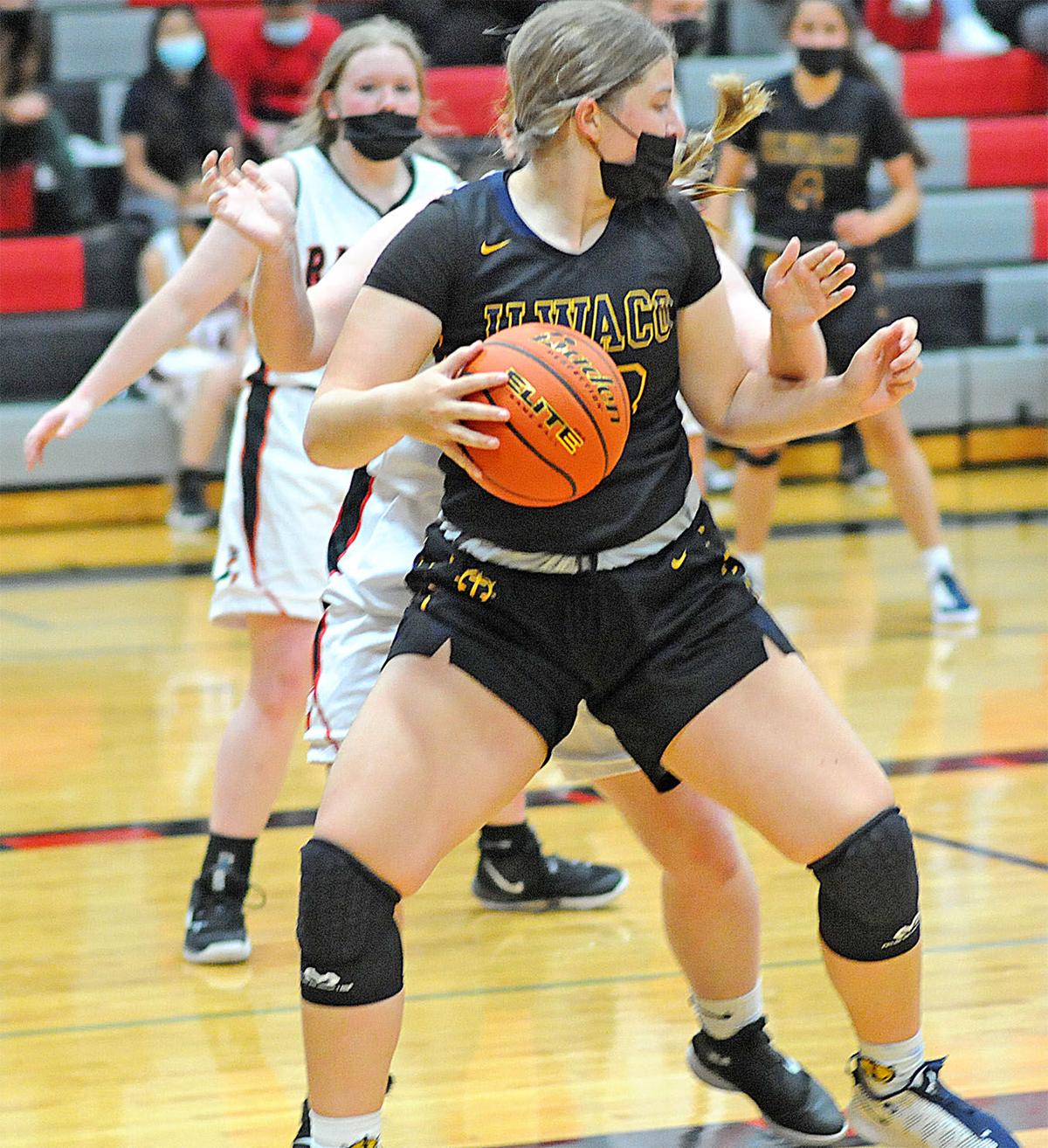 Olivia McKinstry operates from the low block against Maddi Silvernail. 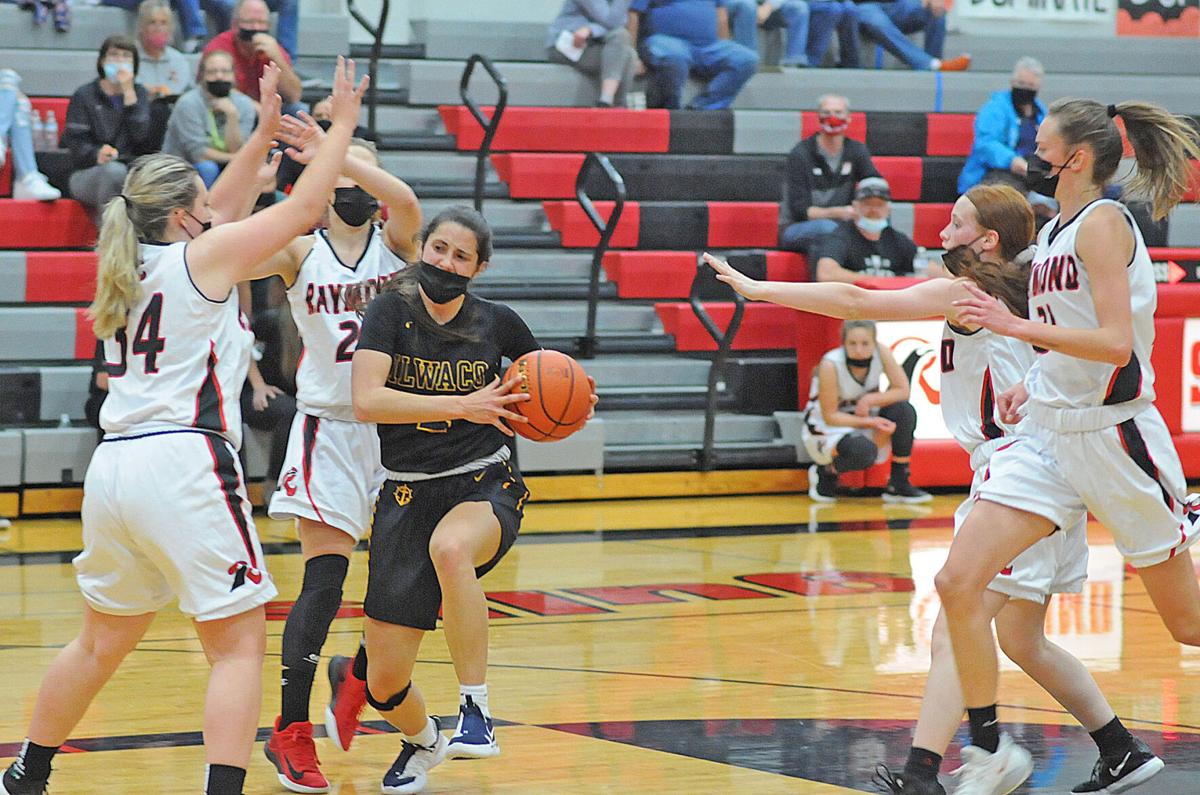 Erika Glenn tries to swerve around the Raymond defense. 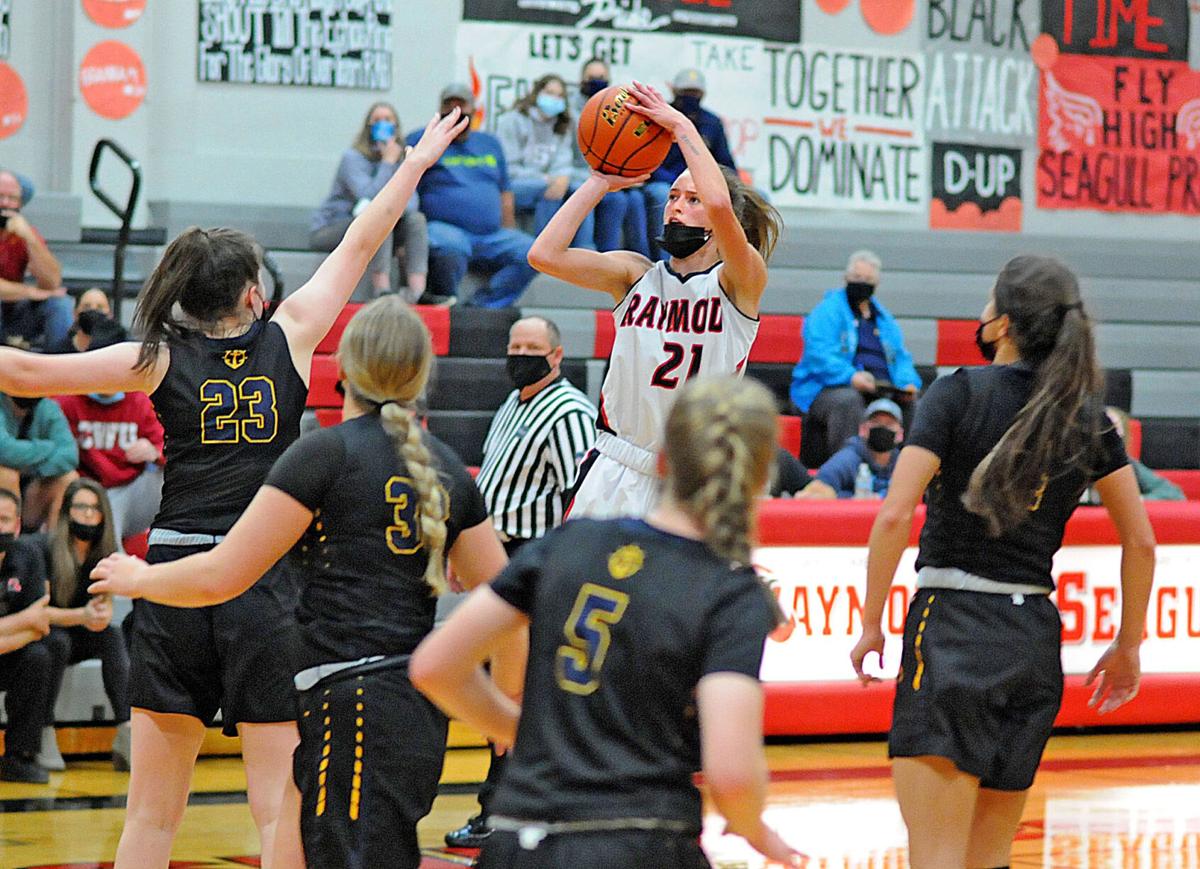 Kyra Gardner shoots against Ilwaco. She had 22 points in Raymond’s win.

Olivia McKinstry operates from the low block against Maddi Silvernail.

Erika Glenn tries to swerve around the Raymond defense.

Kyra Gardner shoots against Ilwaco. She had 22 points in Raymond’s win.

RAYMOND — Second-half rallies by Ilwaco fell short as Raymond, clinching the game with a late 9-3 run, beat the Lady Fishermen 57-49 on Friday.

Ilwaco (4-2) got a 12-point lead down to two several times, the last on a pair of free throws by Erika Glenn with 2:29 remaining. On the next possession, Ione Sheldon shot a three for a chance at the lead, but it rimmed off. Kyndal Koski took off behind the Ilwaco defense, caught the outlet from Hannah Miller and scored to make it a four-point game with 2:00 left. Glenn, who finished with 21 points, went up in the lane against two defenders but missed. Kyra Gardner followed with her sixth three-pointer, stretching Raymond’s lead to 53-46 with under 90 seconds remaining.

Glenn went on the attack one last time, going at the rim before getting whacked hard by Maddi Silvernail. Glenn was down on the floor for a few minutes, her nose bruised on the hit. Glenn hit one of two free throws, then jumped a passing lane for a steal and hit the layup to get the lead down to 53-49. But Miller beat the Ilwaco defense for a fast-break layup with 28 seconds left. Glenn, no longer able to play through her injury, hit the bench, and the Gulls went on to win by eight.

The Seagulls (4-1), second-place finishers behind Ilwaco each of the past two seasons, now trail only Forks (7-1) in the Pacific League, and are even with them in the loss column. Gardner has led Raymond in some good battles with Ilwaco before, but this season she is surrounded with more talent. Eighth-grade guard Karsyn Freeman, whose sister Karlee was an All-State basketball player for Raymond and is now a junior track star at USC, is already living up to her athletic pedigree. Freshman Kyndal Koski is yet another back-court playmaker. Big veteran post players complement this trio with rebounding and expert help defense. When Ilwaco eked out a 43-40 home win over Raymond in the season’s first week, it took an incredible streak of 11 straight points by Glenn over the final 2:20 to make it happen.

Playing at home Friday, Raymond was ready to turn the tables and move ahead of the Lady Fishermen in the standings. Gardner hit back-to-back threes for a 6-0 lead, and nailed two more by the early second quarter as the Seagulls went up 20-8.

Trailing 32-22 early in the third, Ilwaco went on an 8-0 run. Six-footer Juliana Fleming blocked two shots and forced two turnovers in the post during the stretch. At the other end, she knocked down a turnaround jumper from the elbow, then cut down the lane and scored two more on a pass from Zoey Zurn to slice the lead to 32-30.

Koski responded, leading Raymond on a 7-0 run with a three-pointer and a tough mid-range runner.

With Raymond up nine early in the fourth, Tiana Ramsey hit a tear-drop jumper, then hit a three on a kick-out pass from Glenn. Glenn then got a layup to roll in over two defenders to make it a two-point game.

Raymond led 48-42 after another Gardner three with 4:07 remaining, but Ilwaco kept coming. Glenn got by Gardner twice, drawing fouls and hitting four straight free throws to again make it a two-point game with 2:29 remaining.

Ilwaco never got that close again, but the game had a few more twists and turns, with Gardner’s apparent dagger three to go up by seven, Glenn playing through injury to attempt one last rally, and Miller’s layup to finally put Ilwaco away for good.