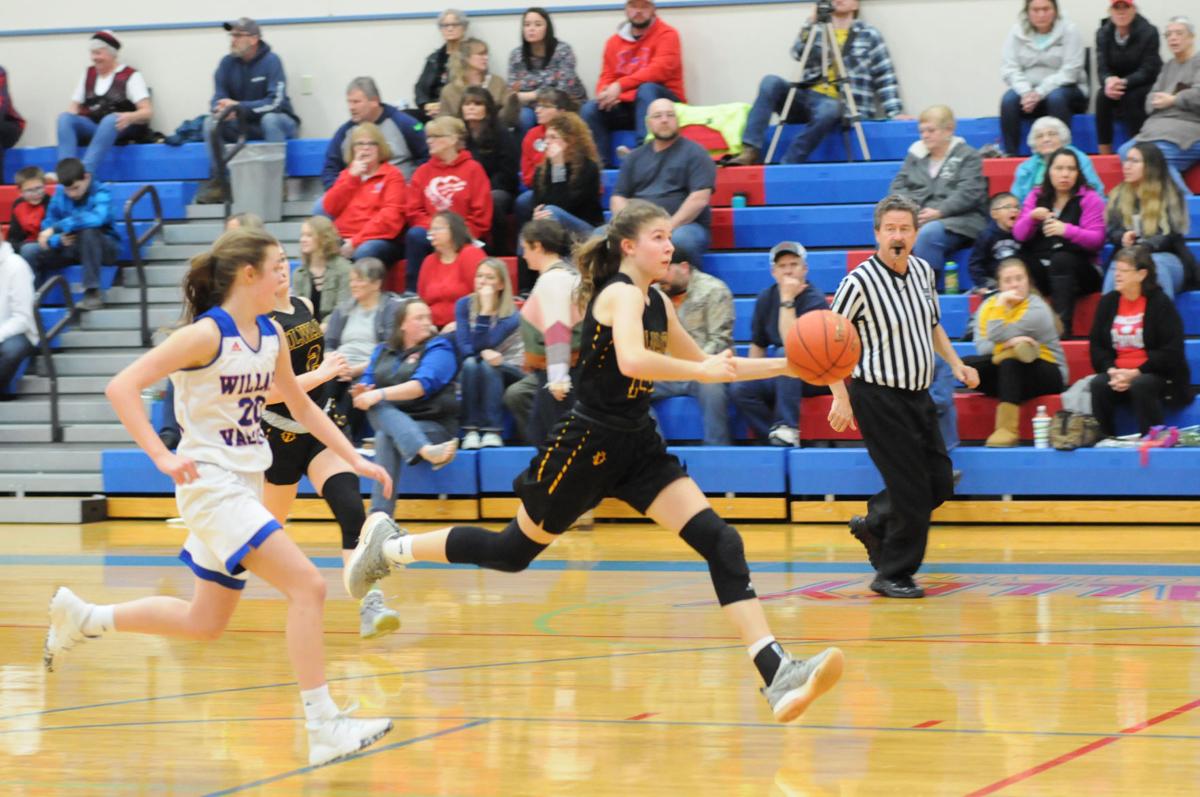 Estella Sheldon strides toward the basket at Willapa Valley. 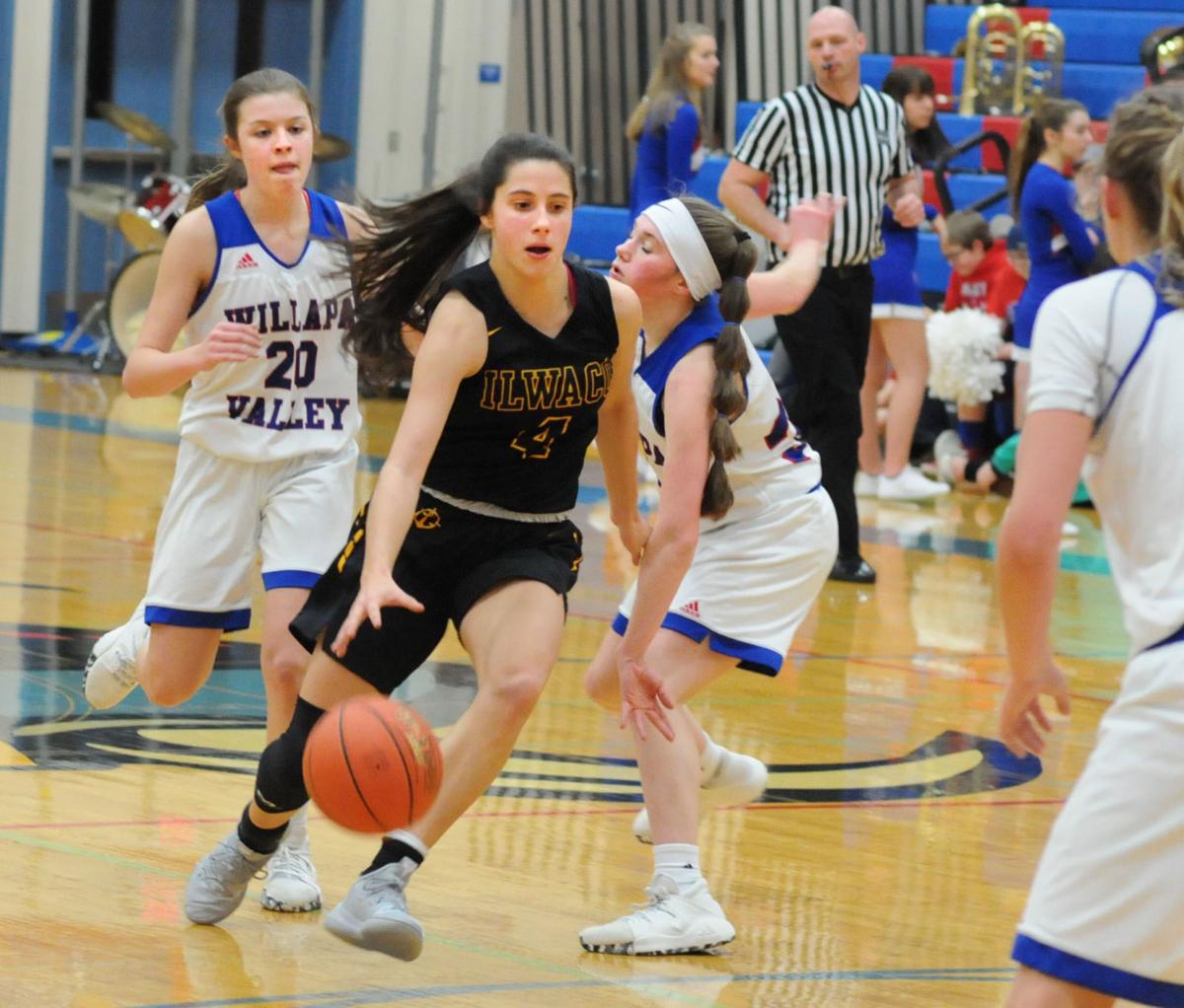 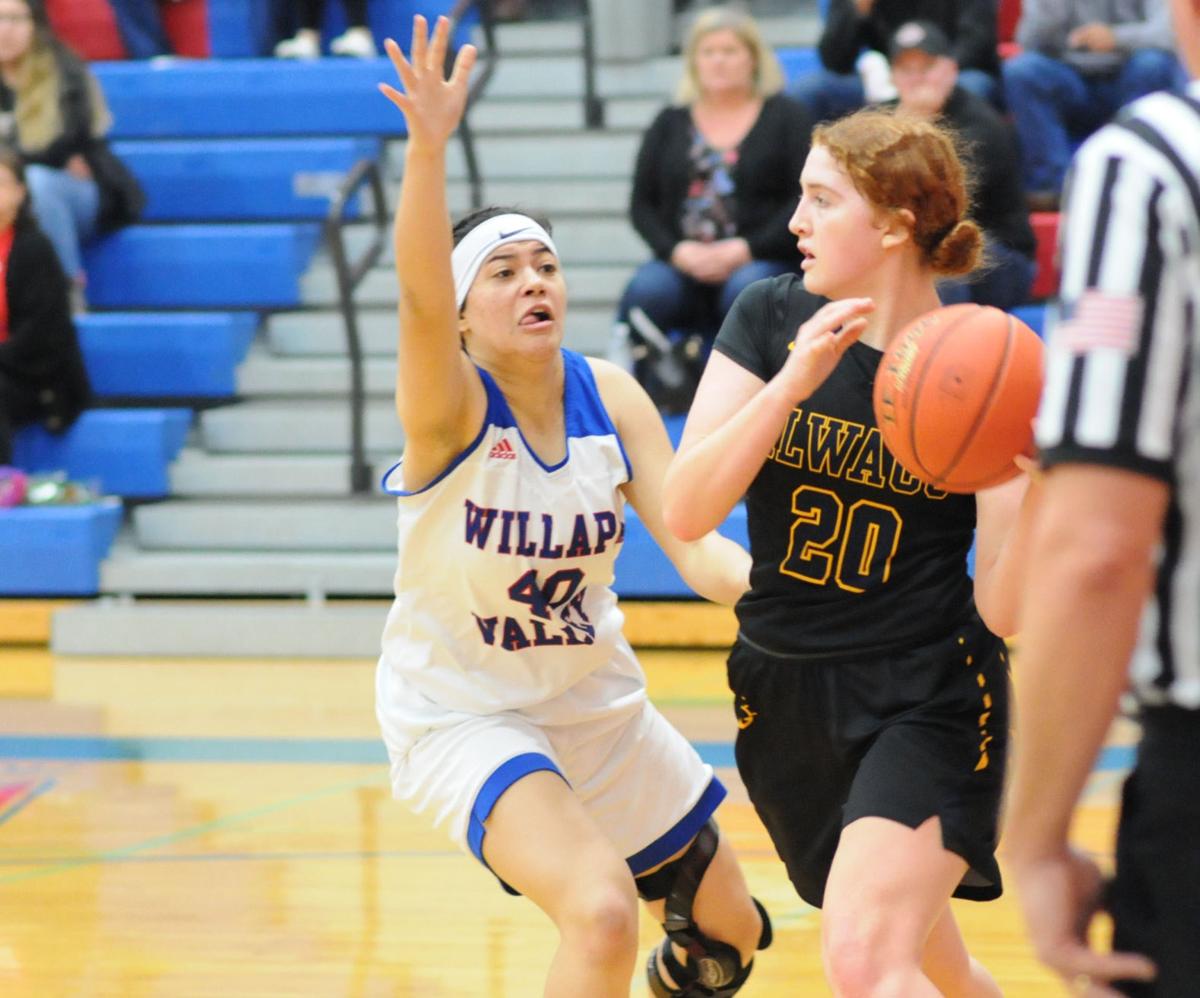 Sunny Kemmer looks to pass as Lannisa Amacher guards her.

Estella Sheldon strides toward the basket at Willapa Valley.

Sunny Kemmer looks to pass as Lannisa Amacher guards her.

MENLO — Trailing 7-4, Ilwaco closed the first half on a 23-0 run to put away the Pacific League’s fourth-place team. That put Ilwaco well on the way to a 53-31 road win over Willapa Valley Monday, Feb. 3.

Sunny Kemmer, who scored Ilwaco’s first six points, started the run with a baseline jumper, then picked off a pass under the opposite basket and fed an outlet to Olivia McKinstry for the Ilwaco lead.

It was one of seven steals on the night for Kemmer; fellow post player Kylie Gray had another five.

“I think they were reading when the driver was going to pass,” Sheldon said. “This team likes to do a lot of backdoor cuts, so they were waiting for that.”

Erika Glenn scored on a lob pass near quarter’s end, then nailed a pair of threes early in the second quarter and had 12 points by halftime.

Sheldon also helped Ilwaco pull away during the second quarter. She hit a pull-up shot from 15 feet and another from three-point range. She added a steal that led to a Kaytlenn Whelden fast-break bucket, one of her three steals in the game.

Sheldon said recovery from a recent ankle injury contributed to her strong performance.

“I think it was just a matter of resting it, and I had a different mental attitude,” Sheldon said. “Last game (against Raymond) was the first time (playing) coming back from it.”

Ilwaco led 27-7 at halftime, holding Valley in check with tight defense near the basket.

“The refs let us be pretty aggressive; it was just a matter of adjusting to how the game was being called,” coach Ned Bittner said.

Erika Glenn sat out the second and fourth quarters after hurting herself on drives at the end of the first and third quarters. Glenn was down for a long time on the second injury but was back practicing by Friday and has recovered according to coach Ned Bittner.

Sheldon’s three-pointer 1:48 into the game opened scoring, starting Ilwaco on a stretch of 21 straight points over a span of just over five minutes. Ilwaco led 25-3 after one quarter.

Sheldon carried the team with Glenn hurt during the second quarter. She hit another three from the corner, then pried away an offensive rebound and sank a pair of free throws. Sheldon added another offensive rebound and put-back for a 35-5 lead and followed by blocking two shots on one possession. Sheldon then scored on a Jaymi Kemmer steal to give her a nine-point quarter. Kemmer made a tough three-pointer near halftime for a 40-7 lead.

Pacific League number one seed Ilwaco gets byes through to quarterfinals of the District tournament. Their quarterfinal will be Saturday, Feb. 15 at a time and place to be determined against either Adna, Pe Ell or Onalaska.