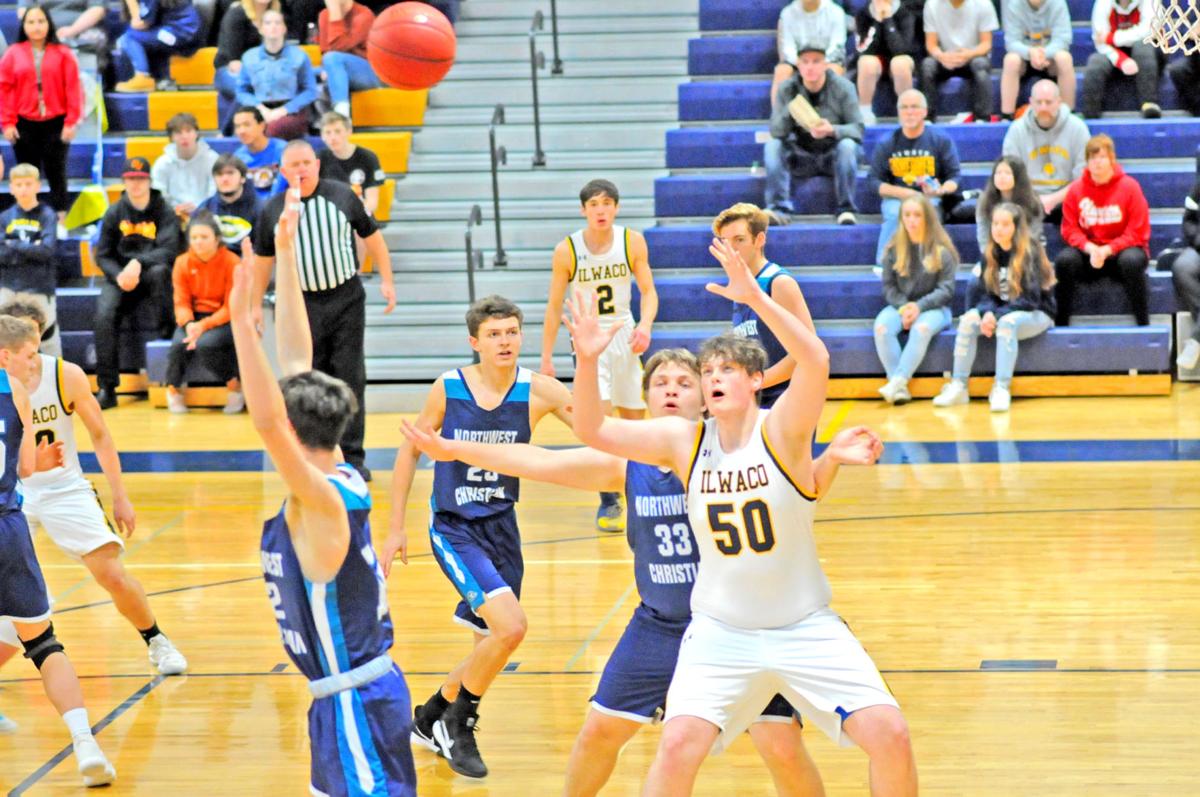 Joe Nisbett receives the entry pass while being guarded by 6’4” Zach Mandlin. 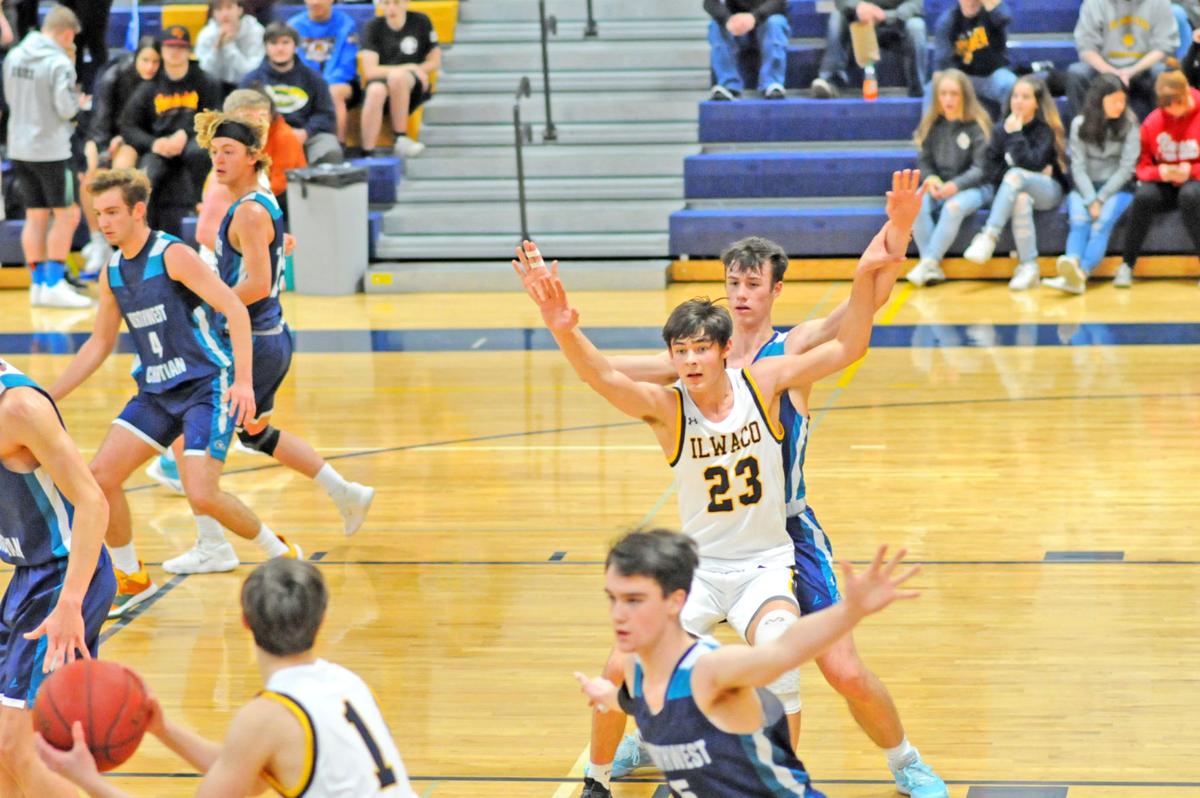 Parker Kaech posts up and calls for the ball as Alex West handles on the perimeter. 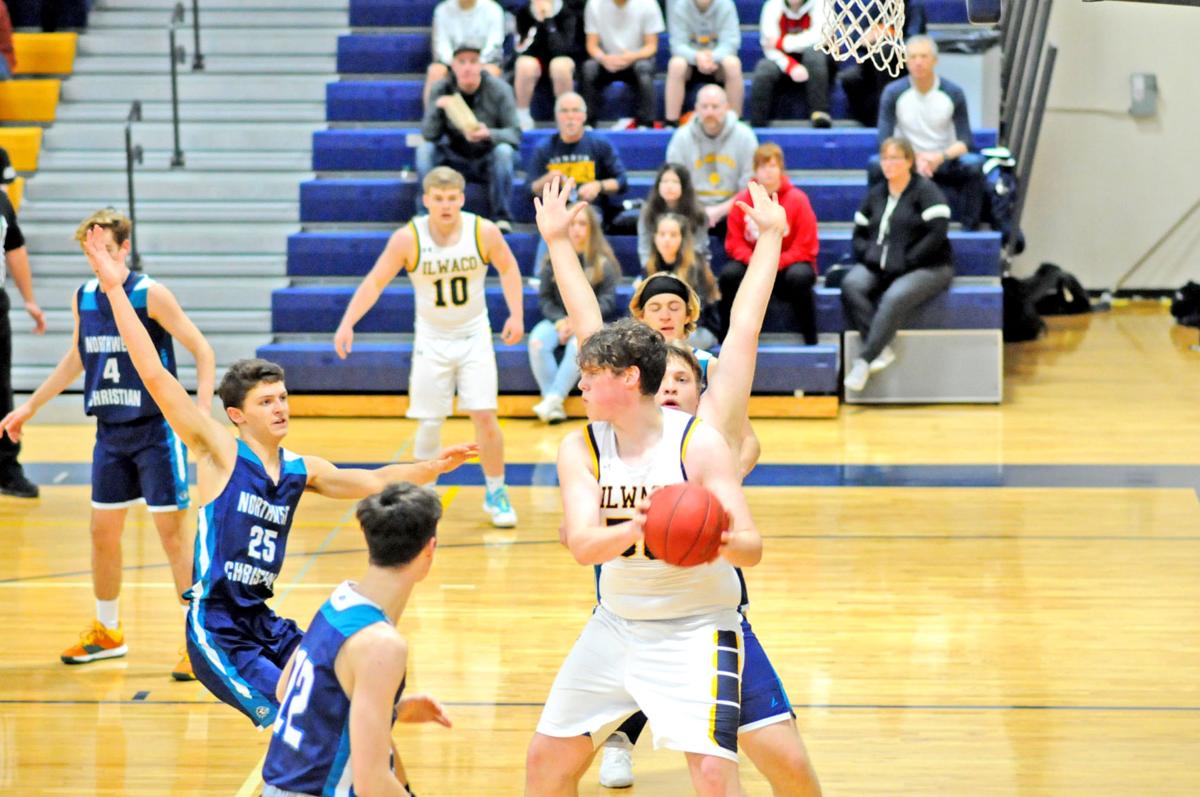 Joe Nisbett looks to pass as three Northwest Christian defenders converge on him.

Joe Nisbett receives the entry pass while being guarded by 6’4” Zach Mandlin.

Parker Kaech posts up and calls for the ball as Alex West handles on the perimeter.

Joe Nisbett looks to pass as three Northwest Christian defenders converge on him.

ILWACO — The Fishermen gave Northwest Christian its first loss, jumping to a big early lead on their way to a 60-47 win Friday, Dec. 13.

The visitors came in with an intimidating new name, the Wolverines, a bigger lineup than Ilwaco, and a 5-0 record. But Calvin Baze went after them right away. He stole a pass on the opening possession, leading to a Joe Nisbett basket, then followed with a three-point shot. Baze made an up-and-under move for the 14-6 lead. The lead expanded to 31-15 when Nisbett scored on a one-handed lob pass from Baze late in the second quarter.

As they attempted to come back, Northwest Christian couldn’t get a run going. Star Noah Phillips carried the scoring burden for the Wolverines, who until this year called themselves the Navigators. But he got little help. Whenever the Wolverines seemed on the verge of making it close, they would usually hoist up a tough long-range shot and miss. Ilwaco had a crisper, quick-passing offense, and pushed the pace to create fast breaks.

“We made some of their players try to do things they aren’t used to doing,” said Calvin Baze, who along with Parker Kaech spent time guarding Phillips. “We’d make Phillips give the ball up and not let him get it back. Coach (Tim Harrell) is always saying make someone else beat you — that doesn’t mean just let them score, but make them do tough things to beat you. In 2B, it’s hard for a team to have good depth, and we’re a team with more depth than most.”

Northwest Christian cut the lead to 10 at times in the third quarter, but Ilwaco played for the last shot in the third and made it work, as Kaech scored on a give-and-go with Nisbett for a 49-35 lead. In the final minutes, Northwest Christian had its last chance to make a game of it. They went on the break hoping to cut it to single digits, but missed under the basket. Kaech hit a three-pointer the other way, making it 58-45 with under 90 seconds left.

Ilwaco improved to 3-1 on the year, all league games. Ilwaco moved into a three-way tie for second in the Pacific League with Northwest Christian and Ocosta. Life Christian leads the way at 4-0.

ILWACO — Led by Joe Nisbett’s 25 points, 11 players scored in Ilwaco’s 63-11 victory over South Bend Thursday, Dec. 12. The Fishermen fed Nisbett early, forcing double-teams, then took advantage with three-pointers to stretch the lead. Junior varsity players got in on the act toward the end.

Nisbett scored six early points and assisted on a Daniel Whiting three-pointer as Ilwaco took a 9-2 lead right away. Ilwaco hit five three-pointers in the late first and early second quarters, including two by Alex West, the last of which extended the lead to 34-5. Nisbett was back at it early in the third quarter, overpowering a defender for a 47-10 lead. Calvin Baze made a nifty overhead pass to a cutting Nisbett to make it 53-10.

In the fourth quarter, Sam Glenn came up from JV and hit a shot. Fellow JV swing player Adrian Sanchez drove most of the length of the court for a layup. Miguel Hernandez’s three-point play made him the eleventh Fisherman to score on the night.