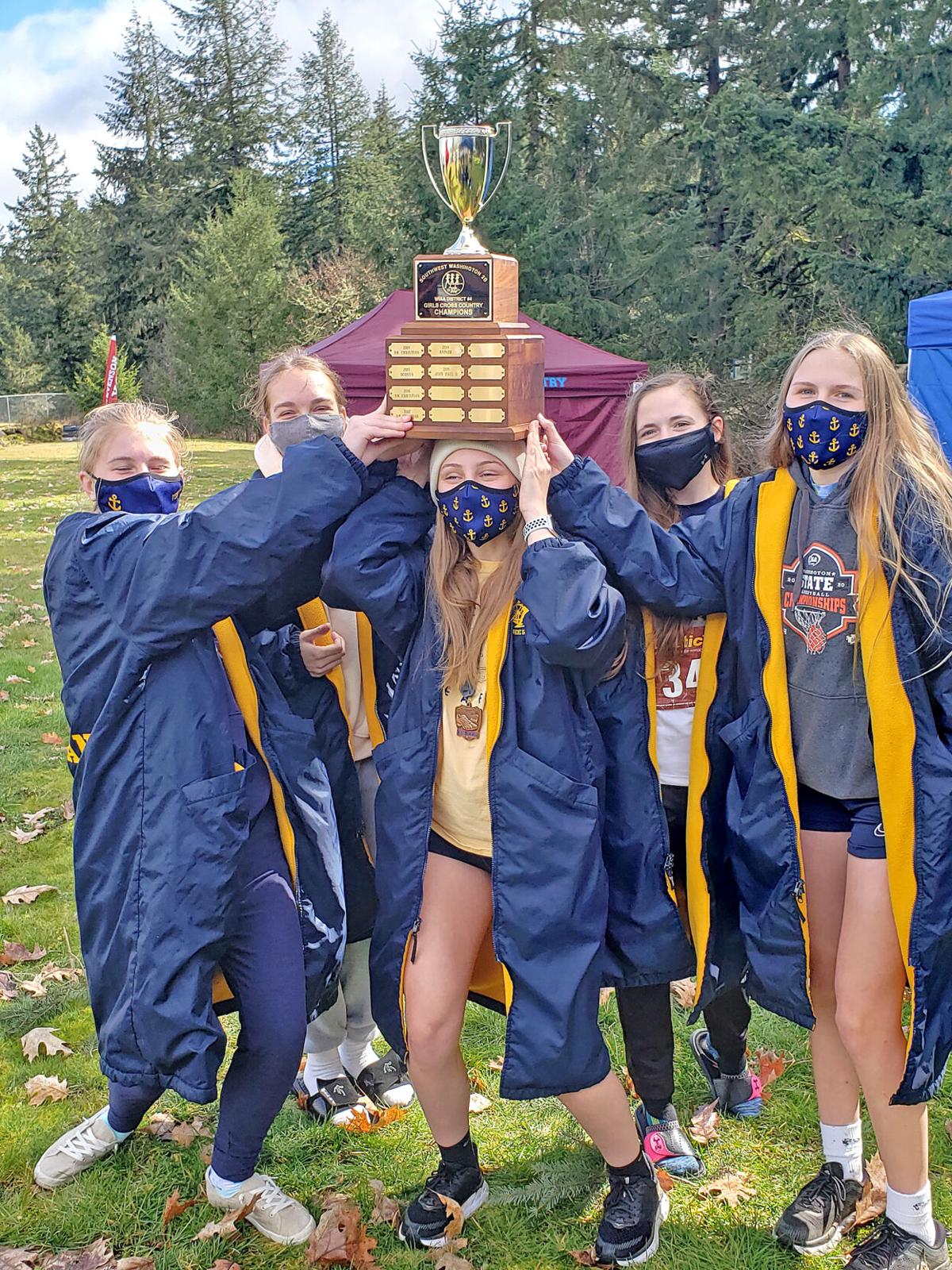 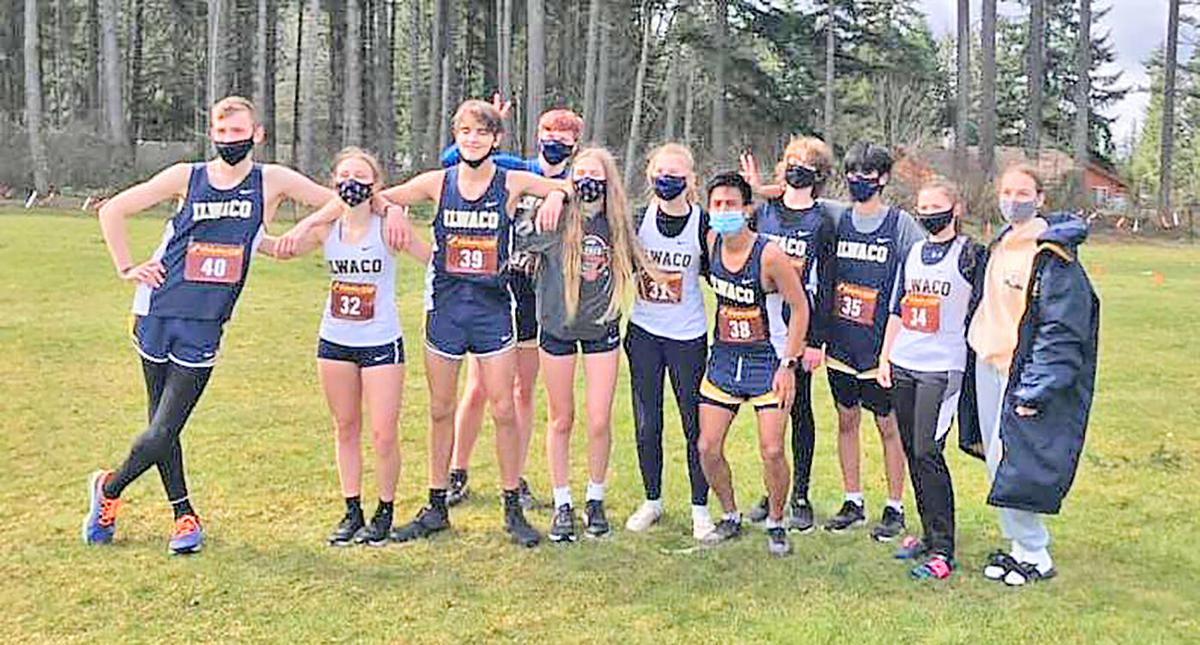 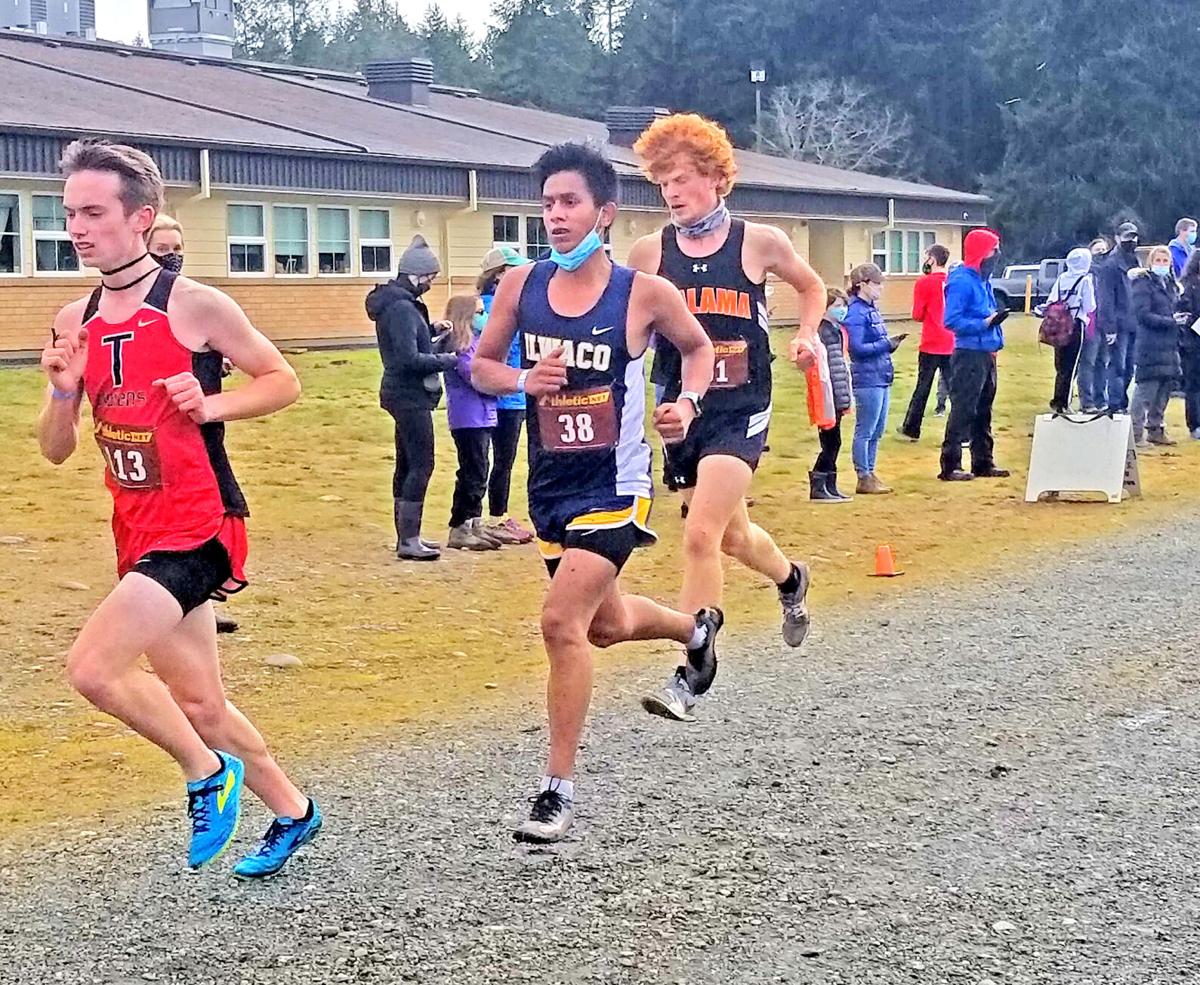 Ilwaco junior Daniel Quintana, center, was undefeated on the cross country circuit this season, which was curtailed because of Covid restrictions and schedule changes. Also pictured are seniors Nicholas Marty of Toledo, left, and Addison Smee of Kalama.

Ilwaco junior Daniel Quintana, center, was undefeated on the cross country circuit this season, which was curtailed because of Covid restrictions and schedule changes. Also pictured are seniors Nicholas Marty of Toledo, left, and Addison Smee of Kalama.

ILWACO — As Coach Sarah Taylor reflected on the just-completed cross country season, she was full of praise for her Ilwaco student athletes.

She also came up with a perfect way to describe her runners.

“This was an unusual season with a ‘small but mighty’ team,” she said.

Because of covid-19 health risks, the WIAA cancelled the traditional fall cross country season and created a shortened competition schedule at the end of winter.

That meant instead of the usual pattern, with weather for training and racing getting colder and wetter as the season progressed, it was the opposite.

“The season started with some very wet and cold meets, but ended with sunshine,” said Taylor. “Our first meet in Ocosta was run during a burst of ice rain — not hail, but not rain either.” The weather that day was so bad that all other regional sports were cancelled.

During early training, juniors Emma Brundage, Sabrina Lessenden and Tazlina Thomas turned out with sophomore Alaina Judd, causing Taylor to fear that the Fishermen would not have a complete girls team for competition with other schools.

But Ione Sheldon came to the rescue. The sophomore’s decision to step up delighted coach and teammates — and proved significant.

The trio of Lessenden, Brundage and Thomas placed 1-2-3 at the opening meet at Ocosta and repeated the feat, with Brundage and Lessenden reversing 1-2 positions and clocking faster times, on their return a couple of weeks later. At the league meet, Brundage was third and Lessenden placed sixth.

“The girls team was undefeated all season and took home the district trophy,” Taylor said. In their final race with more schools competing than earlier meets, Brundage placed fourth and Lessenden ninth.

For the boys, junior Daniel Quintana, who won the individual state championship title at Pasco on a memorable day in fall 2019, was returning. While long-time coach Taylor has seen significant and consistent success with Ilwaco athletes at state track meets, Quintana has proven to be her highest-achieving cross country runner.

Both were eager for opportunities to continue his successes.

He won his first five meets. The 2B District 4 finale at Rainier High School, was anticlimactic, however.

“At the district meet, the lead runner went off course and everyone else followed him, including Daniel, who was only a step behind,” Taylor said. “The course official changed the course so that the runners could finish, but it was very confusing. The official ended up calling it a tie for Daniel and the other runner. The course ended up being half a mile short.”

Quintana and Kalama senior Addison Smee were adjudged to have tied at 14.12; Ilwaco placed eight among boys’ teams competing. Northwest Christian at Lacey won, powered by three boys finishing in the first 10. All are underclassmen who will be eligible to return to competition next season.

The mix-up meant disappointment all around, and no clear picture of the potential rankings for the fall season.

“It was a bummer of a way to end the season for the boys’ team,” Taylor said.

In normal years, the fall postseason for cross country culminates in a meet on a sprawling golf course in Pasco.

Because there was no state race, the Washington State Cross Country Coaches Association arranged a virtual 5K, which Ilwaco ran on the school track. Statewide results are still being compiled. Six Fishermen runners took part; Quintana and Brundage were the standouts. “Daniel ran an impressively fast time,” Taylor said. “Emma really shined as well. She has gained a great deal of fitness and speed over the season.”

Without a break, the Ilwaco cross country athletes moved into the early spring track and boys’ soccer seasons, before looking to turn around for a traditional fall season — unless Covid restrictions cause another reshuffle.