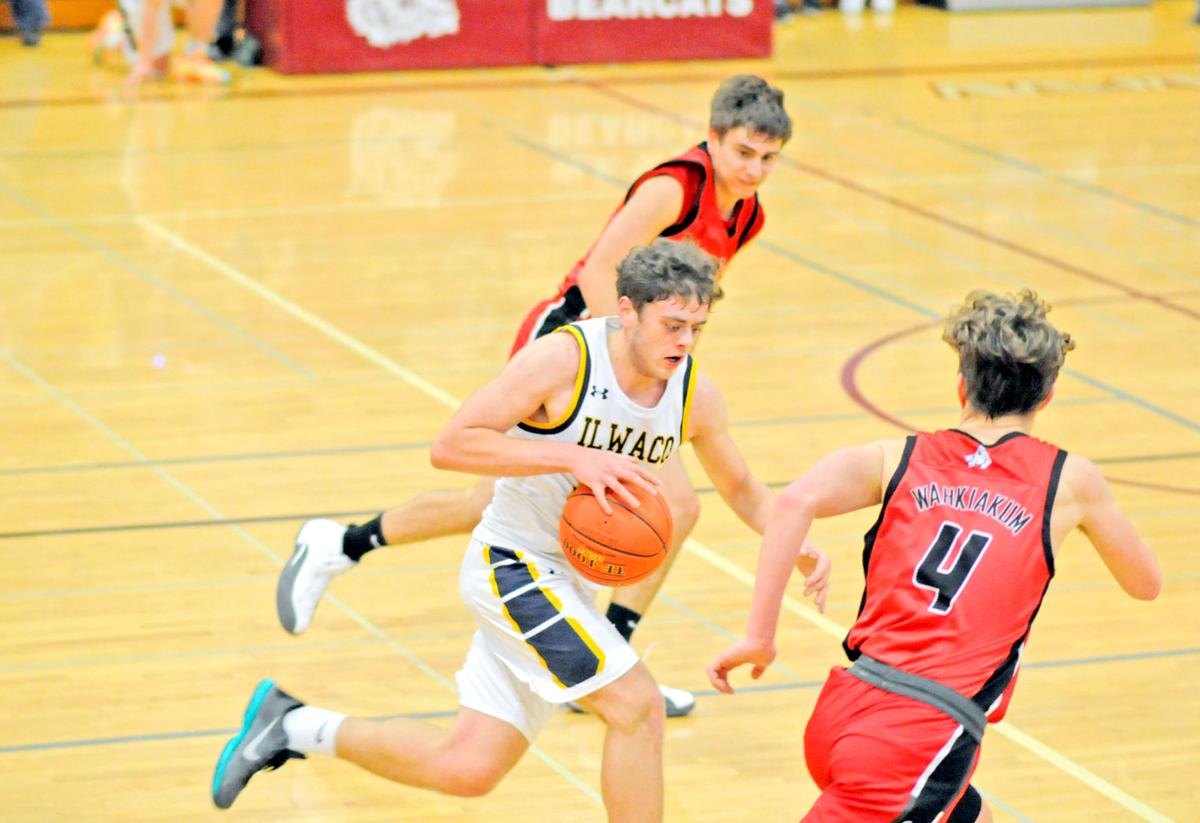 Bubba Douglas takes off after a steal. 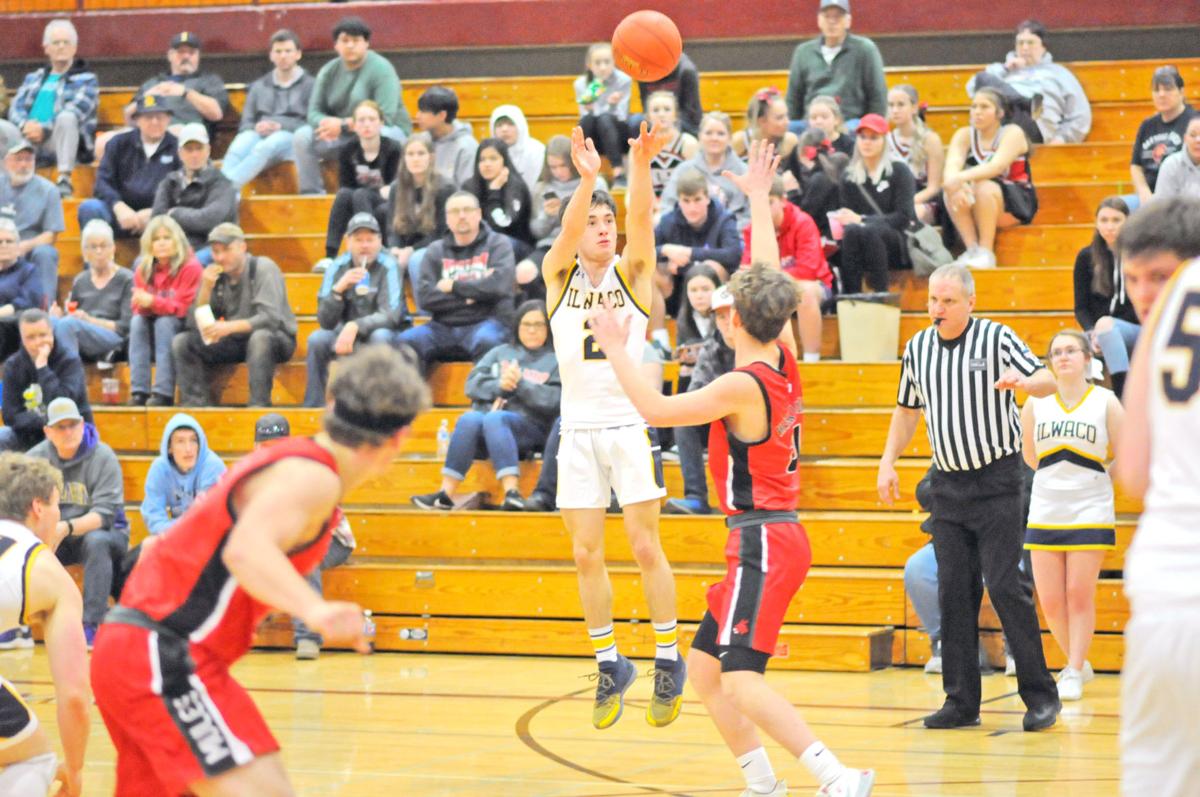 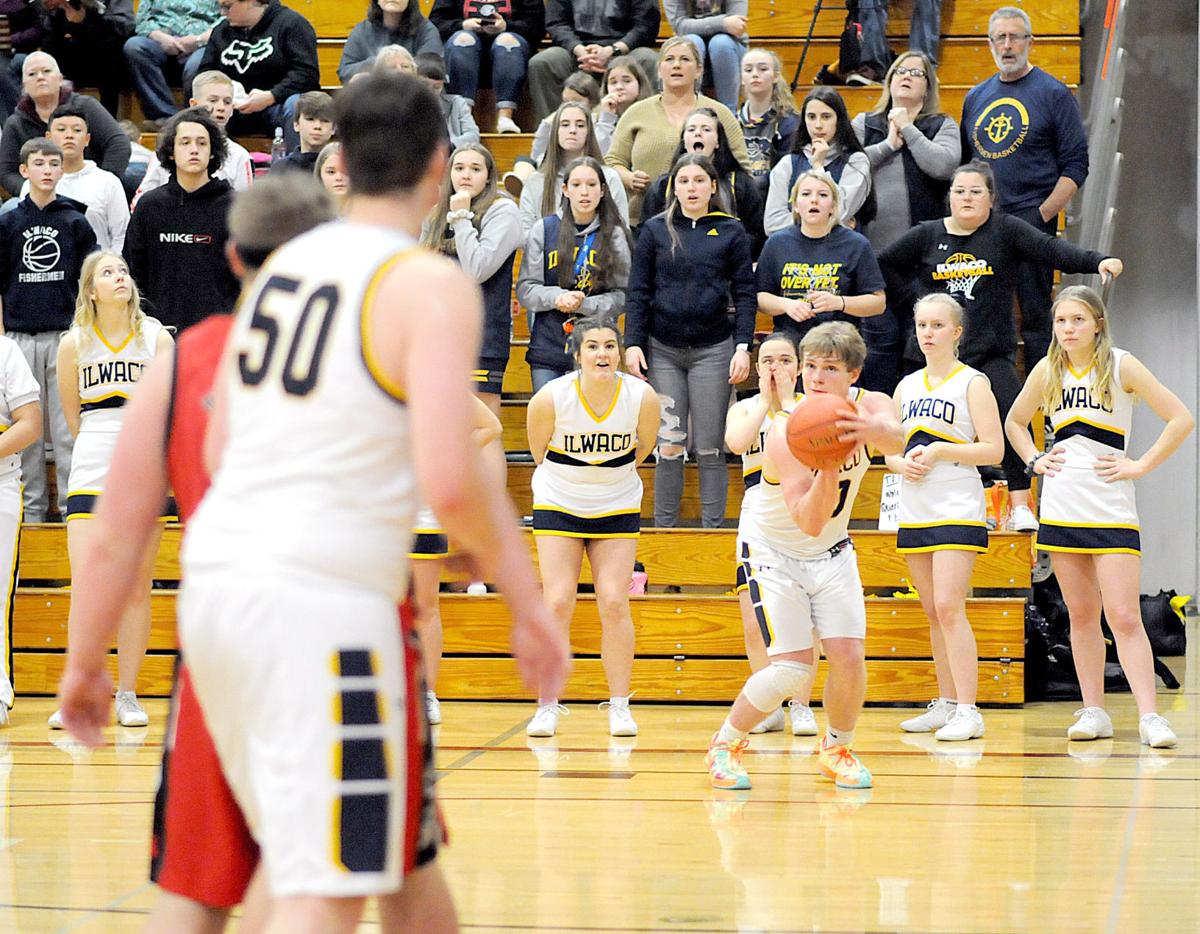 Calvin Baze lines up in the corner for the three-pointer that cut the lead to 15 as the Ilwaco student section and cheerleaders begin to feel the dawning of hope. Wahkiakum had led by 27.

Bubba Douglas takes off after a steal.

Calvin Baze lines up in the corner for the three-pointer that cut the lead to 15 as the Ilwaco student section and cheerleaders begin to feel the dawning of hope. Wahkiakum had led by 27.

CHEHALIS — In a monumental comeback, Ilwaco erased a 27-point deficit before falling short against Wahkiakum 56-52 on Monday, Feb. 17. The loss eliminated the Fishermen from Districts.

With Ilwaco shooting wildly off the mark, Wahkiakum led 19-2 after a quarter. Making the situation still more dire, Ilwaco’s top player, Parker Kaech, picked up three first-quarter fouls and went to the bench. The Mules took leads of 32-7 and 39-12 in the second quarter.

By halftime, the Fishermen offense had recovered from its calamitous start, but the team still trailed 41-17. There was no sign of the massive rally that was to come.

But Ilwaco hit six threes, three of them by Bubba Douglas, to cut the lead to 46-35 by the late third quarter. As soon as their lead began to dwindle, suddenly it was the Mules who were discombobulated offensively. Possessions were ending with the wrong players shooting threes, a handler losing control of the ball, or often a miss near the basket. With 24 seconds in the quarter, Joe Nisbett cut the lead to single digits at 46-38 after getting the ball a couple feet from the basket for his easiest shot of the night.

Everything was swinging Ilwaco’s way. Ilwaco, badly outrebounded in the first half, began dominating on the offensive boards, getting the lead down to 48-44 on a Nisbett put-back. Daniel Whiting picked the pocket of a stunned Brody Carlson and scored to cut it to two with over four minutes left. Carlson then missed a driving shot and, on the next possession, the impossible happened: Ilwaco took the lead on a Whiting three-pointer with 3:10 left.

Wahkiakum turned things around by getting to the free throw line on their next three possessions, including one where they got away with a three-long-strides travel prior to a handoff underneath the basket. They hit five of six free throws during that span to restore a four-point lead.

Calvin Baze answered with a corner three to cut it to one with 1:21 to go. Wahkiakum then broke an Ilwaco press to get K.C. Beery to the line, where he converted both free throws.

Baze missed on a tying three-point attempt, and at the other end, Beery grabbed an offensive rebound and was intentionally fouled with 31.7 seconds left. But he missed the front end, and the Fishermen lived to fight another possession.

Whiting got his defender to jump by him on a pump fake before putting up a three-pointer for the tie, but it rattled in and out. Brodie Avalon secured the rebound, got fouled right away with 12.7 seconds left and sank the front end. He missed the second, and the rebound got batted around as the teams scrambled for it.

Wahkiakum finally secured the loose ball in the corner at the opposite end of the court, and the buzzer sounded on Ilwaco’s season.