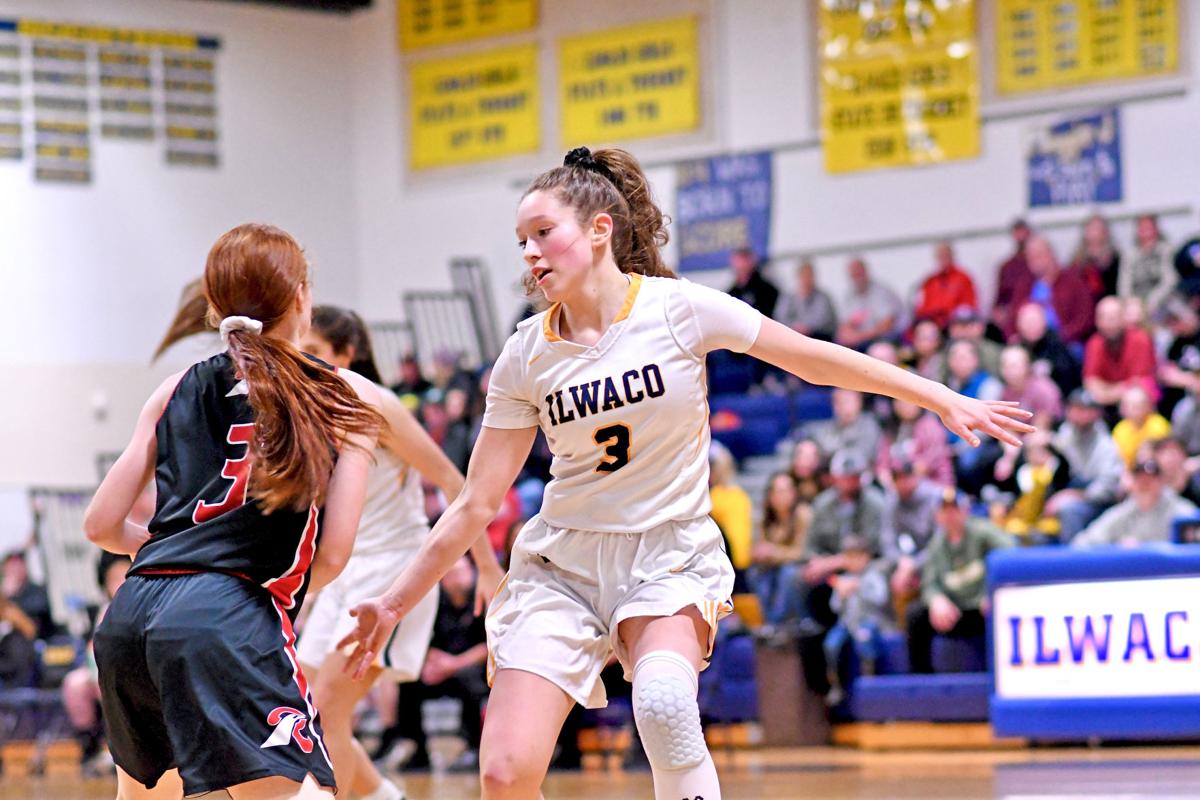 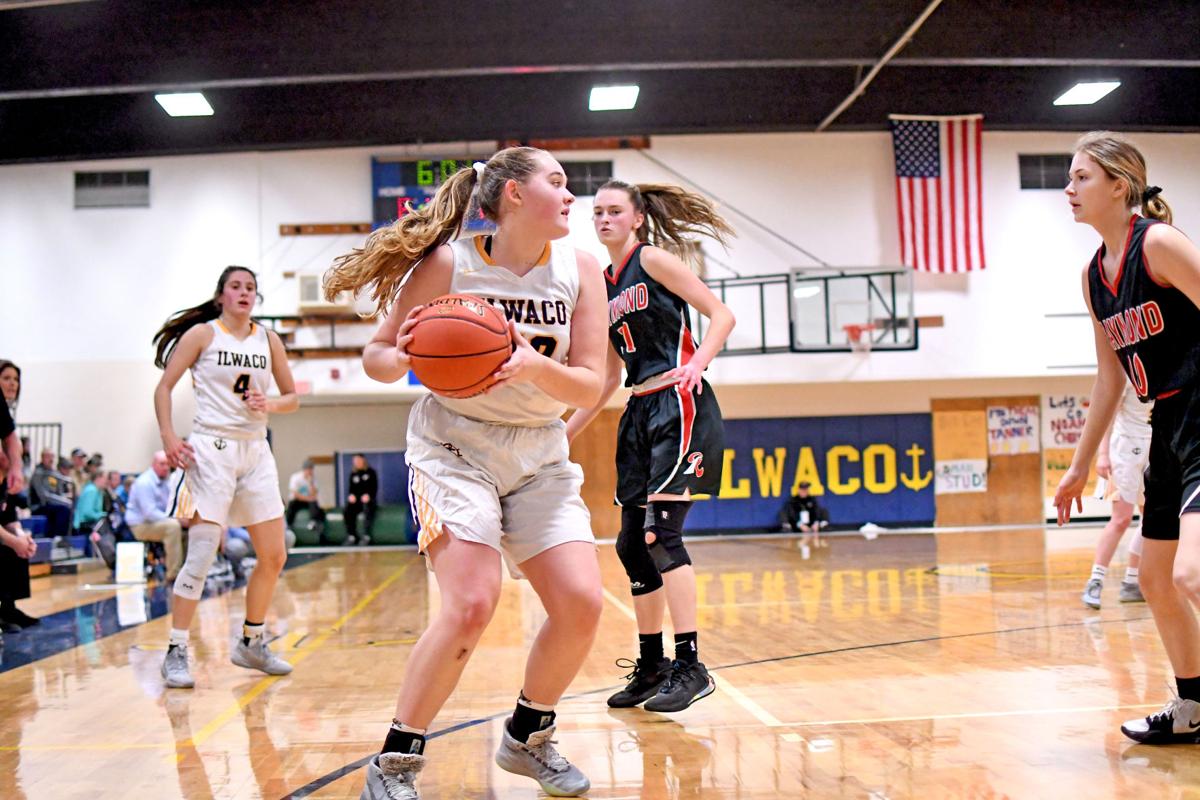 Kylie Gray operates on the perimeter against Raymond.

The elementary school minicheer team performs at halftime of the Ilwaco's home basketball game against Raymond. 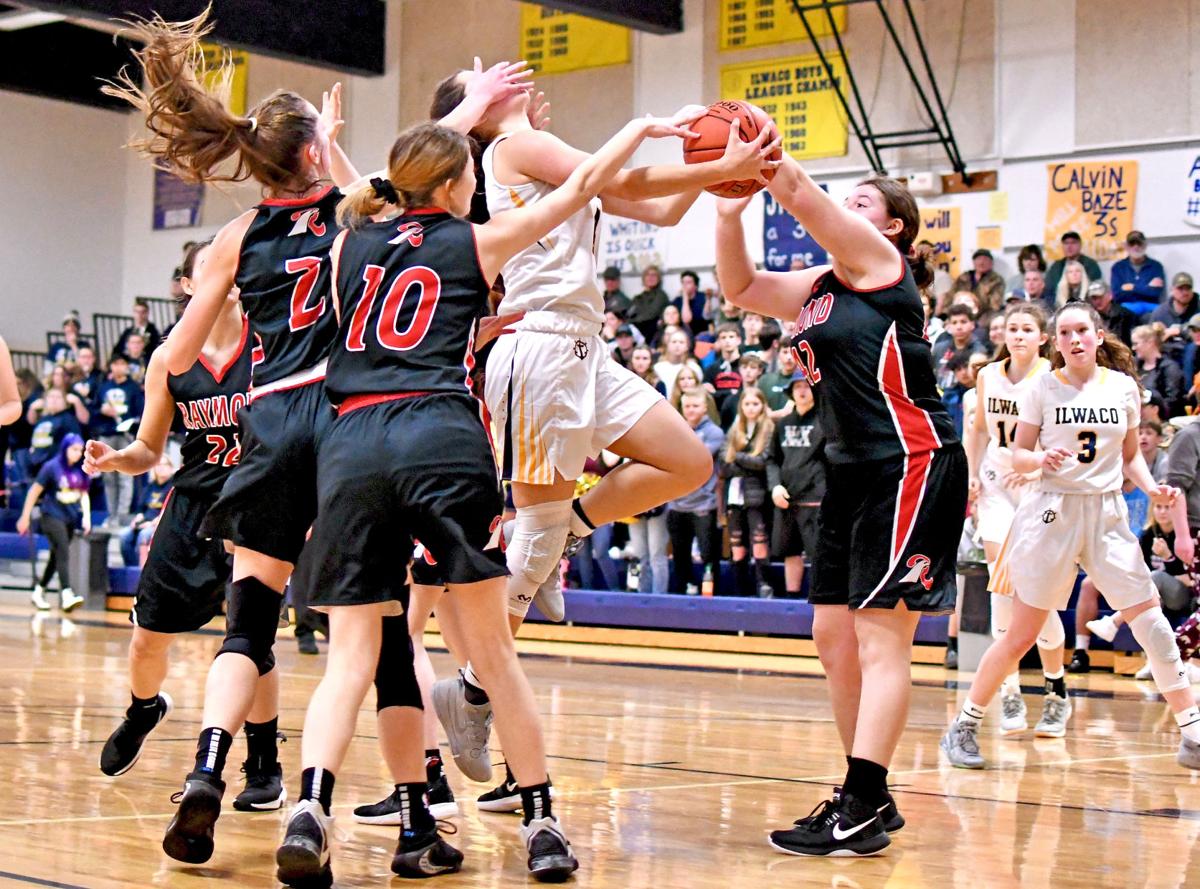 Erika Glenn goes right at the Raymond defense on her way to a 30-point night.

Kylie Gray operates on the perimeter against Raymond.

The elementary school minicheer team performs at halftime of the Ilwaco's home basketball game against Raymond.

Erika Glenn goes right at the Raymond defense on her way to a 30-point night.

Star guard Krya Gardner had 13 points for Raymond. Ilwaco, 85-1 in six years in the Pacific League, shared the title with Raymond in 2016-17 and has stood alone every other season. Ilwaco improved to 16-0 in league play, taking a two-game lead on second-place Raymond with two to go and taking control of the head-to-head tie-breaker with its second win over Raymond this year.

In a matchup of the league’s top two players, Glenn went after Gardner in the early minutes, forcing three turnovers during that stretch. She then lunged at Isabelle Silvernail with perfect timing to force her into a travel. But Ilwaco repeatedly came up empty on offense, scoring just three first-quarter points.

When Ilwaco went into the post, Raymond defenders consistently walled off their frontcourt players. When Glenn had the ball, the Seagulls denied her driving lanes. At the other end, things were much the same. With both defenses fortifying the lane, offenses had to rely on drive-and-kick plays.

“When teams take away what we rely on, teams stop the drive, we have to try a drive-and-kick,” Glenn said. “If I’m stopped, I have to kick it out…My approach is, go until I’m stopped.”

But on a tense night, these shots mostly weren’t going in. Raymond was having similar difficulty, but finally hit a couple to build an 11-3 lead by the early second quarter.

Glenn responded with a second-quarter scoring spurt. Glenn hit a tough three-pointer over Sidney Swogger while falling down. She continued playing opportunistic defense, going over and pestering a ball-handler off the in-bound to draw an offensive foul. Minutes later, Glenn rebounded a Raymond miss and took it into the teeth of the defense for a three-point play. On the ensuing inbound, Raymond threw a long pass that Kylie Gray intercepted and fed to Glenn, cutting the lead to 13-11 with 3:59 in the half. At halftime Raymond led 18-16.

With Glenn playing with three fouls and Kaytlenn Whelden on the bench, Tiana Ramsey took a turn guarding Gardner in the third quarter. Ramsey played tight defense, but Gardner hit some tough shots, at times creating from nothing. She bounced off Ramsey for a tough step-back three; with slightly more contact there might have been an offensive foul called, as there was on the same play earlier with Whelden defending. Gardner added a three-point play, getting fouled while hitting a baseline fade-away. She then took a defensive rebound all the way for a layup to tie the game at 26.

Glenn answered with a three-pointer from the right side of the arc, sizing up her defender and lining up her shot.

“When I’m in that mentality, if my [defender] has her hands down at her side…I’m going to shoot it.” Glenn said.

That shot started her on another quick scoring binge. After a Raymond defensive rebound, Glenn abandoned her assignment to go over and rip the ball away near the sideline, got fouled, and hit both free throws.

She thought Raymond was vulnerable because Gardner wasn’t bringing the ball up.

“I saw Kyra didn’t have it…I went over. I kind of took a chance and it paid off,” Glenn said.

Whelden padded the lead with a creative end-of-the-quarter play. With the clock winding down she went into the lane and extended her arms into defenders to hand the ball to Olivia McKinstry near the basket; McKinstry scored, capping a 19-point quarter for Ilwaco, which led 35-28.

“When we’re struggling, I think we just try to move the ball faster sometimes,” Estella Sheldon said. “Erika gets a drive to get us going, or someone hits a big shot and that gets us going.”

Glenn started the fourth quarter by stonewalling an Anna Silva drive at the free throw line, forcing a turnover and turning it into a layup.

About a minute later, Glenn got a half-step on Gardner, zipped past the help defender and glided to the rim for a basket through contact, then hit the free throw for a three-point play. Ilwaco was suddenly ahead by 12, 40-28, with 6:41 to go.

Gardner sought a way to get Raymond back in it. On one play she hounded Glenn, then ran about 30 feet to take the ball right away from Sunny Kemmer as Kemmer was receiving a pass. But the Seagulls scored only two more points the rest of the night.

Ilwaco was the champion once again.

“I’m just excited and grateful, and happy to play for this team,” said McKinstry, a freshman center. “It was crazy intense. It was great to see the boys [team] and everyone show up to support us.”

“We knew we needed to lock down the title, we needed the ‘six-pete,’” added McKinstry, who grew up watching the teams that were starting that streak.

Ilwaco faced Willapa Valley Monday and will close out the regular season at home against Ocosta Friday, Feb. 5 at 7 p.m.

OCEAN SHORES — Ilwaco sat Tiana Ramsey and Estella Sheldon, who were dealing with injuries, to rest them for the showdown with Raymond, but it didn’t slow them as they put up 50 first-half points against North Beach Tuesday, Jan. 28 in a 74-16 win.