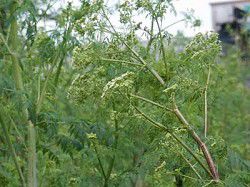 <I>Contributed photos</I><BR>Poison hemlock resembles a number of other plants that grow in our area, but can be readily identified by its blotchy purple stems and other characteristics. 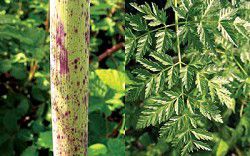 Know how to identify and control poison hemlock

<I>Contributed photos</I><BR>Poison hemlock resembles a number of other plants that grow in our area, but can be readily identified by its blotchy purple stems and other characteristics.

Know how to identify and control poison hemlock

WASHINGTON - There have already been four cases of human ingestion of, or exposure to poison hemlock, in 2010 with one resulting in the recent death of an adult in Pierce County, according to the Washington Poison Center. This is the first human poison hemlock caused fatality in Washington state since 1999.

Poison hemlock can be mistaken for many edible and ornamental members of the carrot family such as parsley, sweet cicely, parsnip, wild carrot, and anise that have similar-looking flowers, leaves and seeds. It is imperative to be able to identify poison hemlock to prevent accidental ingestion. The biennial plant can grow very tall, reaching heights of eight feet. The hollow stem is smooth and hairless and has very distinctive purple blotches all over it. It has large, glossy green, finely divided, fern-like leaves that are smooth and hairless. Like many members of the carrot family, poison hemlock produces flat-topped flower arrangements consisting of small clusters of tiny, white, five-petaled flowers.

Compounds in poison hemlock give the entire plant - especially the leaves when crushed - an unpleasant odor that has been described as musky or resembling the smell of mouse urine. An aggressive invasive species, poison hemlock rapidly colonizes streambanks, vacant lots, roadsides, pastures and meadows, especially where the soil is moist, outcompeting native plants and desirable forage species.

Poison hemlock contains toxic alkaloids, including coniine and g-coniceine, which are found in all plant parts but is most concentrated in unripe seeds. These poisonous compounds affect the nervous system. Initial symptoms may include a burning sensation in the mouth, nausea, vomiting, confusion, respiratory depression, and muscle paralysis. Death, when it occurs, is usually rapid and due to respiratory paralysis.

Due to its toxicity and invasiveness, poison hemlock is a listed Class B noxious weed in Washington. It is designated for control in many counties throughout the state, which means that landowners in these counties are required by law to control and prevent the spread of this noxious weed. However, because poison hemlock is so dangerous to have around, the state and county noxious weed control boards recommend controlling it wherever it grows.

When removing poison hemlock, it is advisable to wear gloves to prevent accidental exposure to plant juices. Small patches of poison hemlock can be dug up, making sure to remove the taproot. Do not cut or mow the plants, as they will only resprout.

Herbicides containing the chemical glyphosate are readily available and can be very effective. Be sure to follow the label carefully. The best time to spray poison hemlock is when the leaves are just a basal rosette, and before it forms flowers. Remember that the toxins will remain potent in dried plant material. Never put pulled plants in the compost or leave them where children or livestock might eat them. Follow-up efforts will be necessary to control seedlings that may germinate at the site. Plant grasses or desirable plants to help prevent new poison hemlock plants from establishing.