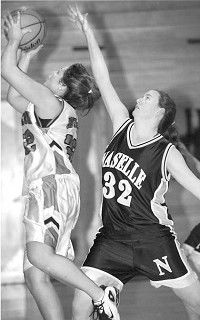 CATHLAMET - The Naselle Comets girls basketball team more than held its own for two quarters of their season-opening game against the Cathlamet Mules Thursday, Dec. 1. However, the other two quarters - the second and third, especially the second period - were a different matter and the Comets' inability to score in those two quarters spelled the difference. Those two quarters were too much for them to overcome in a 56-49 loss to the Mules.

The Comets started with a rush and led 18-10 by the end of one period.

However, the second quarter was an entirely different matter as they were outscored 11-2 and went in at the half trailing 21-20.

The Comets were able to regain their shooting touch in the third period, but the Mules momentum helped to carry them to a six-point advantage in the period and a 38-31 lead going into the final eight minutes. Thirty-five of the Mules points came in the second half when they outscored the Comets 35-29.

The teams battled point for point through the final eight minutes, but the 18-all standoff did not give the Comets the boost that they needed to take the lead and they went home with the seven point loss, 56-49.

The Mules got double-digit production from several people, including in points scored, rebounds, and assists. They had three people in scoring double figures, two in rebounding, and one player in assists.

The Comets couldn't quite match the Mules balanced effort. However, their back court of junior Erin Saari, with 17 points, and sophomore Brandi Keightley, with 10 points, led the Comets scoring as the two of them scored over one-half of the NHS points. Exchange student Mayuko Takami, in two quarters of play, tallied eight points to come close to giving the Comets three double digit scorers.

second quarter in loss to NB

NASELLE - It was, again, a case of the second quarter "blahs" for the Naselle Comets girls basketball team Saturday, Dec. 3, in Naselle's Lyle Patterson Gym. The Comets were only able to score one point as they were outscored by 13 points in that period, and they lost their non-league game to the North Beach Hyaks by 13 points, 50-37. The Comets season record in non-league games dropped to 0-2 with the loss.

North Beach is rated as one of the "Teams to Watch" in the preseason poll conducted by WashingtonPreps.com. The Hyaks had a 14-9 record last season but their returning players gave the pollsters reasons for optimism. Their balanced scoring and rebounding on Saturday night did little to negate that high estimation.

The Comets had started the game off in fine shape, leading the Hyaks by three points at the end of one quarter. However, things went south in the second stanza as the Comets couldn't buy a hoop. The Hyaks scored 14 points to fashion a 10-point lead at the half-time break.

Whatever had been troubling the Comets shooting was remedied somewhat during the intermission as the Naselle girls popped in 13 points in the third period. But the Hyaks had their best scoring period of the game as they poured in 17 points led by Sheena Jerome. She chipped in nine of her 10 game points with all nine coming off of three 3-pointers to start the second half.

Even with their improved scoring in the third stanza, the Comets were still only able to shoot 26 percent from the floor for the game. But they were red-hot at the line where they popped in their foul shots at an 81 percent rate.

The final eight minutes saw the Comets unable to gain any ground on the Hyaks. Infact, they were outscored by one point on their way to a 13-point loss.

The Comets girls now turn into "road warriors" as their next five games are away from the cozy confines of Patterson Gymnasium. They traveled to Warrenton last night, Dec. 6, and are at Northwest Christian in Lacey on Thursday, Dec. 8, and at Lake Quinault in Amanda Park on Saturday, Dec. 10.

The Comets next home game, and the only one until after the New Year, is Dec. 19.

Photos: Iowa hangs on to beat Nebraska to claim the Heroes Trophy for sixth straight year