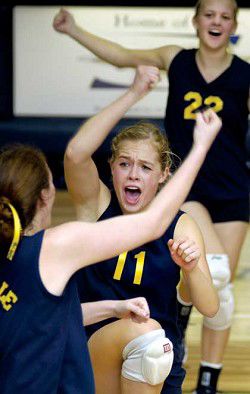 <I>DAMIAN MULINIX photo</I><BR>Kellyn Pakenen pumps her fists with Cheryl Steppe, left, and Jenny Klinger, right, after scoring a point in the decisive fourth game of the match. 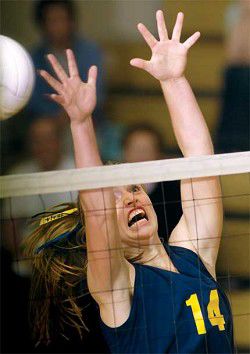 <I>DAMIAN MULINIX photo</I><BR>Sylvia Herrold goes up for a deflection during an early set. Herrold led the team with 14 kills.

<I>DAMIAN MULINIX photo</I><BR>Kellyn Pakenen pumps her fists with Cheryl Steppe, left, and Jenny Klinger, right, after scoring a point in the decisive fourth game of the match.

<I>DAMIAN MULINIX photo</I><BR>Sylvia Herrold goes up for a deflection during an early set. Herrold led the team with 14 kills.

NASELLE - Playing Mossyrock, one of the top 2B teams in the state for the past couple of seasons, the Naselle Comets volleyball team found themselves in a hole early in the match played last Thursday in Lyle Patterson Gym. The Comets and Vikings each played tough and tight in the first game before the Vikings took a six- point lead and then went on to win 25-21. The Comets were forced to regroup and they did with a carbon copy 25-21 win in game two. Naselle added a similar 25-20 win in game three, and then blew the Vikings away with a 25-16 win in the fourth and deciding game for a 3-1 win of the non-league match. The Comets record improved to 3-0 for the season, all in non-league games.

As the scores indicate, the first three games were hard fought with neither team having a lead of more than six points anytime in any of the three games. That large of a lead came in game one when Mossyrock took a six point lead at 20-14 and again at 21-15. Naselle was able to whittle that lead down slightly in the next three service changes but the Vikings held on for their 25-21 win. The Comets balanced scoring was not able to match the Vikings two big scorers who served for six and seven points respectively with the last two points coming on an ace and then the winning point by their top server.

Game two turned into a barn-burner with Mossyrock scoring the first five points only to see Naselle come back with five points in a row. The Vikings held a slim lead of one or two points through the first complete rotation of servers, plus one server. The next two servers produced a four-point lead for the Vikings, at 21-17. Jenny Klinger then went on a eight point serving binge, with one ace, and the Comets evened the match with their 25-21 win of game two. Klinger with nine service points, including an ace, and Ashley Ahlstrom with seven service points, and two aces, led the Naselle servers.

The third game, which turned the direction of the match, started out very close with Naselle holding a slim lead through the early going. However, Mossyrock eased in front with neither team being able to hold their serve for more than one or two points through most of the second round of service rotation. The Vikings led 17-16 after two rounds. That close battle continue as Ahlstrom served for four straight points to bring the score to 24-19 with Naselle looking for the game point. They didn't get it and the Vikings gained the serve but only were able to score one point before losing serve. Herrold then served the 25th point and Naselle took the lead in the match 2-1, with their 25-20 win.

Game four started out just as close as the preceding games until Herrold got the serve. She promptly served for 12 straight points and the Comets lead jumped to 16-3. The Vikings pecked away at the Comets' lead, until Kellyn Pakenen added four service points to bring Naselle's lead to 21-11. The Vikings outscored the Comets 5-2 in the next couple of rounds until Herrold again got the serve. She promptly boomed an ace and the Comets then scored the match point off her second serve. The Comets 25-16 win gave them the match 3-1 over the Vikings.

Coach Debbie Denny said, "After three tight games with lots of ties and lead changes, we put it all together in the fourth game."

The Comets will travel to Menlo to take on the Willapa Valley Vikings this Thursday, Sept. 21.

Lady Comets beat Adna in straight setsNASELLE - After teetering on the edge of losing their first game in a non-league volleyball match with the Adna Pirates, the Naselle Comets rallied to win in straight sets over the Pirates. The match, played Monday, Sept. 11 saw the Comets sweep the match 26-24, 25-23, and 25-8.

As the scores indicate, the first two games were as tight as could be. The Comets could not get their offense on track in the early going of game one and trailed the Pirates until late in the game. Naselle was on the short end of scores of 5-8, 6-15, and 9-17, after one complete team rotation, before starting a comeback by getting their offense in gear.

However, Adna would not crumble and still led 23-19 late in the game. On their next serve, the Comets were able to score only one point before the Pirates got the serve back. The Pirates scored one point, bringing them to game point at 24-20. However, Naselle got the serve back without allowing that point. Cheryl Steppe then stepped up and served for six consecutive points as the Comets raced past the Pirates for a 26-24 overtime win.

Game two replicated game one in the results, if not in the flow of the game. Naselle trailed early in the game, saw the score tied three times at 6-6, 7-7, and 8-8. They then fell behind again by as much as a 21-18 margin before battling back for the win. Jamie Bighill's three service points brought the Comets within a point at 22-21. The Pirates then got the serve back and scored only one point to make the score 23-21. Naselle got the serve again and Ashley Ahlstrom then served the final four points for the 25-23 win.

The two close wins seemed to give the Comets more life and drained the vitality from the Pirates, and the third and deciding game was all Naselle. Leading from the get-go as Kellyn Pakenen served the first four points, it only took the Comets one complete team rotation, plus two Pakenen service points on her second round as server, to shut down the Pirates 25-8.

Sylvia Herrold dominated the Naselle attack with 15 kills and four blocks in the match. Steppe and Pakenen each had four kills, while Bighill led with 13 assists and Jenny Klinger added nine assists.

Watch now: Dawson says his OLB group doesn't 'have time to be young'