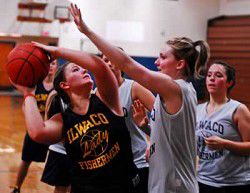 The Lady Fishermen will be looking for big results from two of their seniors on the court this, Kenzi Wirkkala who will provide a low post presence.<I><BR>Photos by DAMIAN?MULINIX/Chinook Observer</I> 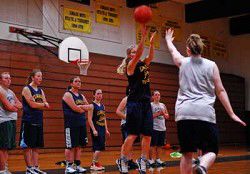 Alexa Wirkkala who will light it up from outside.

The Lady Fishermen will be looking for big results from two of their seniors on the court this, Kenzi Wirkkala who will provide a low post presence.<I><BR>Photos by DAMIAN?MULINIX/Chinook Observer</I>

Alexa Wirkkala who will light it up from outside.

ILWACO - The past two seasons the Lady Fishermen have finished second in the Trico League, but come up short to earn a trip to state. This season, with five veteran players returning. coach Ned Bittner says, "It's time that we can move up a notch and win the league title and make a run at regionals."

His statement speaks volumes about the Ilwaco girls' basketball program's recent success and also about the state of high school basketball in Washington. For the first time since 1923, state tournaments will have a new format. The 16 teams go to regionals, but only eight will move on to three-day state final events. The girls state tournament system began in 1978.

"We'll have to re-set our sights on doing well in district, then in the regionals, and hopefully see if we can earn a trip to Yakima," Bittner says. Regional tournaments for Ilwaco could be at Glacier High School or Centralia and Chehalis. To get to district the Lady Fishermen need to finish either first or second in the league or win a play-in game if they finish third through sixth.

They will count on a quintet of veterans players, all of which are in the 5-foot-6 range in height. But all five have started from one to three seasons for Ilwaco. Gone is all-league center Ashley Tapio and honorable mention guard Aimee Banuet, both of which are on the Centralia College roster.

Returning is all-league Alexa Wirkkala and second-team Kenzi Wirkkala. "Alexa is an explosive offensive threat with three-point range and she can also score inside," Bittner says. "She will have to guard a taller person most of the season, but then we all will probably be doing that."

Alexa Wirkkala (12.5 points per game last season) set what is likely a record for both Ilwaco boys and girls hoops when she sank eight threes in a game.

"Kenzi loves basketball and plays with a big heart. She can hit the mid-range jumper and she is a force inside and doesn't back down from anyone on the boards, even when they are six inches taller," Bittner praises. Kenzi Wirkkala (10.5 ppg.) and Alexa Wirkkala have started since their freshman seasons.

The Lady Fishermen have a pair of shooting guards with experience as well. "Sidney Ward and Kady Kirby both can make the three and they should be able to open up the defense for us with their outside shooting ability. They can handle the basketball and are improved on defense," Bittner says. The Wirkkalas, Ward and Kirby are all seniors.

Elleigh Kaino was pressed into service at point guard last season as a sophomore and brings a year of battling the best in the Trico to the court. "Elleigh is confident and plays aggressively and she knows how to get the ball to our scorers. She adds speed and defense to our team. These five girls know our system and they work hard to execute it."

Bittner's philosophy is to take teams out of their comfort zone by being aggressive on both offense and defense. "We will fast break when we can and try to spread things out on offense and then attack the basket. Defensively we will do everything from full-court trapping defense, to zone, to man-to-man. We will be deeper this season and even though we don't have an experienced center, we will hope to play bigger by being aggressive for 32 minutes."

Castle Rock looks like the pre-season co-favorite in the Trico because of their overwhelming size and athleticism, especially in their sophomore class. Ridgefield, down from the 2A ranks, also looks strong, but Bittner says, "Every team in our league has talent. There will be no pushovers." He sees Onalaska and Rainier as being at the top of the Evergreen League and Elma and Hoquiam, who are also down from the 2A level, could be forces at district.

Krista Glasson, Grace McPhail, Jackie Smith and Victoria Thrasher have a season of junior varsity basketball experience. Kristina Aguayo, Merissa Cass, McKenzie Dalton, Jessica Deibert, Addie Glick, Noelle McPhail, Camille Rogers, Alicia Trusty, Dibb Suwanarat and Keiana Yasunaka are all new to the program. Assistant will be first-year coach Cari (Wirkkala) Herbertson. "These girls are a hard-working group. If we play as hard as we practice, we will be all right," Bittner concludes.

Carriker Chronicles: Should the Big Ten have allowed fans in the stands?