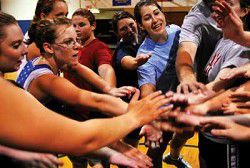 New Ilwaco volleyball coach Marie Green, right of center, leads her team in a group cheer at the end of a practice last week.<I><BR>DAMIAN?MULINIX/Chinook Observer</I> 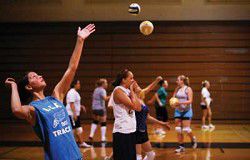 New Ilwaco volleyball coach Marie Green, right of center, leads her team in a group cheer at the end of a practice last week.<I><BR>DAMIAN?MULINIX/Chinook Observer</I>

ILWACO - Marie Green is the third volleyball coach for the Lady Fishermen in three years and her goal is simple, yet lofty.

"I want to be here at Ilwaco for the long run and to build volleyball back up to where it was when I was in high school." When she was a junior Ilwaco placed seventh at state, the only time the Lady Fishermen have ever earned a trophy in volleyball in their five appearances.

Last season Ilwaco was 0-14 and the year before 1-13. Their last trip to district was in 2005 when they finished with a 3-14 mark. Green and first-year teacher and assistant coach Keri Kostur are helping 25 girls "relearn the basics, set goals on a bi-weekly basis, train to meet those goals and to have some fun." Grant Chinn, who has returned to the community from Colorado and who was coach in 2006, will serve as a volunteer assistant.

Returning from last season's varsity squad are senior setter Charlotte Johnson, junior outside hitter Marin McDonnell and Brittnee Pattison at middle blocker, and sophomore outside hitters Alexa Wirkkala and Sydney Ward. Of those five, only McDonnell and Johnson were on the varsity the entire 2007 season.

Green says following the first two practices, "Every position is open and we won't decide who is on the varsity until next week. I will probably keep nine on the varsity full-time and have three players swing between the JVs and varsity."

The climb from being a combined 4-41 the past three seasons to competitiveness will likely be a process for the Lady Fishermen that will take time. Green will work closely with the middle school and junior varsity. "I want volleyball to be a total program. We will all practice together once every couple of weeks and the high school girls will have younger sisters who are on the middle school team to help our program become more connected." Sheena McNulty will again coach seventh grade and Keri Karl, another rookie teacher and coach, will be eighth grade mentor.

Castle Rock, Stevenson and LaCenter will be the top teams in the Trico League for the umpteenth season in a row and Kalama should be much improved. District will be a battle as Onalaska and Montesano return extremely talented groups of athletes. The WIAA has not yet determined the bracket or district allocations for the Nov. 14 and 15 state tournament in the Yakima Sun Dome, but the Trico has vacillated between three and four berths the past several years. It is likely the five teams at the top of the two leagues will have some spirited matches to see who goes to Yakima and who stays home.

"I will get really excited as a coach during the matches," Green promises. Her charges can use all the encouragement they can get as they face a challenging rebuilding task in 2008. The Lady Fishermen open their season by hosting Naselle Sept. 8 and the Astoria JVs Sept. 9 at Carl Aase Gymnasium.