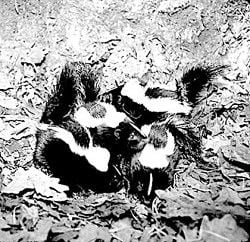 Two skunk species found in Washington state. The striped skunk on the left, and the spotted skunk or civet cat on the right. 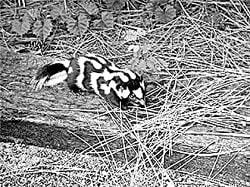 Two skunk species found in Washington state. The striped skunk on the left, and the spotted skunk or civet cat on the right.

Skunks are mild-tempered, mostly nocturnal, and will defend themselves only when cornered or attacked. Even when other animals or people are in close proximity, skunks will ignore the intruders unless they are disturbed.

Skunks are beneficial to farmers, gardeners, and landowners because they feed on large numbers of agricultural and garden pests. While young skunks are cute and kittenlike, they are wild animals and it is illegal to keep them as pets.

Two skunk species live in Washington: The striped skunk (Mephitis mephitis, Fig. 1) is the size of a domestic cat, ranging in length from 22 to 32 inches, including its tail. Its fur is jet black except for two prominent white stripes running down its back. The striped skunk occurs throughout most lowland areas in Washington, preferring open fields, pastures, and croplands near brushy fencerows, rock outcroppings, and brushy draws. It is also seen-or its musky odor noticed-in some suburban and urban locations, particularly near sources of open water.

The spotted skunk (Spilogale putorius, Fig. 1), also known as the civet cat, ranges in length from 14 to 18 inches, including its tail. Its fur is a black or grayish black, with white stripes on its shoulders and sides, and white spots on its forehead, cheeks, and rump.

 Skunks will eat what they can find or catch. They have large feet, well-developed claws, and digging is their primary method used to obtain food.

 Some of their favorite foods include, mice, moles, voles, rats, birds and their eggs, and carcasses-also grasshoppers, wasps, bees, crickets, beetles, and beetle larvae.

 Skunks will roll caterpillars on the ground to remove the hairs before eating them. They will also roll beetles that emit a defensive scent, causing the beetle to deplete its scent before they eat it.

 Dens are located under wood and rock piles, buildings, porches, and concrete slabs-also in rock crevices, culverts, drainpipes, and in standing or fallen hollow trees.

 Skunks may dig their own dens, but more often use the deserted burrows of other animals, such as ground squirrels and marmots.

 Dens are either permanent, or used alternately with other dens.

 Spotted skunks are excellent climbers and may use an attic or a hayloft as a den.

 Skunks do not hibernate; instead, they lower their body temperature and stay inside their dens during extreme cold, plugging the entrance with leaves and grass to insulate them from the cold.

 In late April and May, females of both species give birth to four to five young in an underground nest lined with dried grass and other vegetation.

 At around 60 days of age, the mother leads her young out at dusk to forage and hunt. At three months old the skunks are almost full-grown and completely independent.

 Striped skunk families often remain together throughout the winter.

 Skunks also die as a result of road kills, trapping, shooting, and killing by farm chemicals and machinery.

Signs of skunks include their tracks, droppings, and evidence of their digging. A musky odor is another sign of their presence. A persistent smell and freshly excavated soil next to a hole under a building or woodpile indicates that a skunk may have taken up residence.

Skunks usually begin foraging after dark and are back in their dens before daylight. While striped skunks are sometimes seen during the day, spotted skunks seldom are-they may not even venture out on bright moonlit nights.

Skunks search for food along established routes and have a home range of less than 2 miles. Since they commonly patrol country roads looking for road-killed animals, vehicles often hit them.

When around skunks, avoid making loud noises, moving quickly, or taking other steps that could be interpreted by the skunk as a threat. If the skunk appears agitated, retreat quietly and slowly.

Skunks have poor eyesight and will often approach people who are standing still. If this happens, slowly move away from the approaching skunk.

Look for droppings where skunks have been feeding or digging, or near a den. Droppings look like those of domestic cats and contain all types of food, from insect skeletons, to seeds or hair. Striped skunk droppings are ? inch in diameter, 2 to 4 inches long, and usually have blunt ends. Spotted skunk droppings are similar looking, but half the size.

In other animals, musk is used for scent-marking and courtship. Only the skunks have turned musk into olfactory muscle. When an adult skunk or its young are threatened, they may emit a musky fluid from a nozzlelike duct that protrudes from the animal's anus. This fluid -nature's version of tear gas - can be discharged either in a fine mist or in a water-pistol-type stream. It has a stifling, pungent, often gagging odor that can persist for weeks and be detected over a mile away. On a still day, a skunk can discharge musk 12 feet with good accuracy. On a windy day, spray may reach a person standing downwind 18 feet away or more. Because even a few droplets of skunk spray smell so strongly, it doesn't take a direct hit to pick up the odor.

People's reaction to the odor varies greatly. Almost everyone finds it intolerable when in high concentration. Some people become violently ill. Low levels of the odor are still repugnant to most, while a few find them bearable or almost pleasant.

Because skunks have a limited supply of ammunition, they don't waste their defensive spray. A striped skunk can fire five to eight times before it has to reload, which takes about a week.

Fortunately skunks have various ways of warning when they are threatened, giving an intruder ample opportunity to back off. Dogs, however, tend to ignore this warning. That's why it's hard to find a human who has been sprayed, but easy to find a dog that has!

Contrary to popular myth, a striped skunk cannot spray over its back. When threatened it will stomp its front feet and, if the threat continues, it will make short charges with its tail raised in the direction of the threat. Next, the skunk will twist its hind end around so it is headed in the same direction as its snout. If the sunk continues to feel threatened, it will then spray.

Musk produced by spotted skunks is more pungent than that of striped skunks. However, they are less likely to spray, and will climb a fence post or a tree when threatened. When forced to, a spotted skunk will stand on its front feet with its back arched so that the spray is discharged forward.

The odor-bearing fluid, or musk, is amber in color, oily, and only slightly volatile. Therefore, it goes away "on its own" very slowly. However, it will go away eventually (perhaps in two to four months), even if nothing is done to get rid of the odor. This natural process is greatly slowed in areas with little ventilation and when the musk has penetrated porous materials.

If a person or pet is sprayed, the quicker you do something about it the more completely you can remove the odor. First, if eyes get irritated, flush them liberally with cold water. Next, because skunk spray is highly alkaline, counteract this by washing with mildly acidic substances such as carbolic soap, tomato juice, diluted vinegar, or the following home remedy:

Always mix the solution in a large, open container. A closed container can explode. The mixture will bubble because of the chemical interaction between the baking soda and the hydrogen peroxide. Use the entire mixture while it is still bubbling. Wearing rubber gloves, apply the solution, work it into lather, and leave it on for 30 minutes.

After washing with any remedy solution, follow with a long hot shower. Depending on the severity of the spray, you may have to repeat the process two or three times.

These solutions may be used to eliminate most of the skunk odor from people and pets. When washing a dog, wash the body first and then the head to keep the dog from shaking off the mixture. This will make the odor tolerable - only time will eliminate it.

Depending on the severity of the spray, clothing may be soaked in a weak solution of household chlorine bleach, ammonia, or products containing neutroleum alpha. If the clothing has been heavily sprayed, however, your best option may be to discard or burn it, because fabric will hold the skunk odor for a long time.

The above products may also be used to clean odor from inanimate objects. If the odor is inside or under your house, the area will need to be thoroughly aired out. Using fans will help.

And remember . . . the best remedy is Don't Get Sprayed!

Russell Link is author of "Living with Wildlife in the Pacific Northwest," Seattle: University of Washington Press and the Washington Department of Fish and Wildlife. It is available by mail through the Department of Fish and Wildlife, Attn: Book Sales, 16018 Mill Creek Blvd., Mill Creek, WA 98012. Make checks for $25 payable to WDFW. This article was adapted with permission from the author from (wdfw.wa.gov/wlm/living/index.htm).