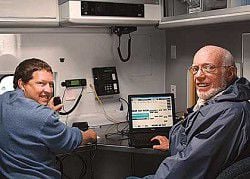 <I>KEVIN HEIMBIGNER photo</I><BR>Kevin Kistler and Bob Dennison man the Pacific County Mobile Command unit during the national amateur radio competition last weekend. Their "Get on the Air" unit was available for anyone to use and also served as a portable station to test for emergency communication capabilities. 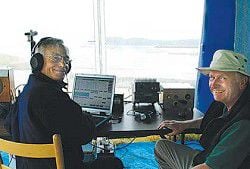 <I>KEVIN HEIMBIGNER photo</I><BR>Dick Lemke, president of Pacific County Amateur Radio Club, and Dick Goodall, a self-described "code nut" decipher morse code messages from as far away as Virginia in their tent at Morehead County Park Saturday. They were part of the national competition that ran from 11 a.m. Saturday until 11 a.m. Sunday.

<I>KEVIN HEIMBIGNER photo</I><BR>Kevin Kistler and Bob Dennison man the Pacific County Mobile Command unit during the national amateur radio competition last weekend. Their "Get on the Air" unit was available for anyone to use and also served as a portable station to test for emergency communication capabilities.

<I>KEVIN HEIMBIGNER photo</I><BR>Dick Lemke, president of Pacific County Amateur Radio Club, and Dick Goodall, a self-described "code nut" decipher morse code messages from as far away as Virginia in their tent at Morehead County Park Saturday. They were part of the national competition that ran from 11 a.m. Saturday until 11 a.m. Sunday.

NAHCOTTA - Last weekend was like Christmas, New Years, Halloween and your birthday all rolled into one for over 200,000 amateur radio and Morse code operators in the U.S. and Canada as the annual national competition took place. For about 30 members of the Pacific County Amateur Radio Club (PCARC) the staging area for the competition at Port of Peninsula and Morehead County Park was a buzz of intense activity, well-connected wires, and gangly antennas; all for the sake of catching one more signal from some far-off source.

Dick Lemke, PCARC president, and member Dick Goodall were self-proclaimed "code nuts" as they manned the Morse code tent at Morehead Park beach and intently encoded and recorded on their computer the tap-tappings from San Francisco, Indiana and Virginia almost simultaneously Saturday afternoon. The national competition is an annual event that pits Ham radio clubs on the North American continent against each other. "Basically the more contacts, the more points we get," Goodall explains. He is from Seattle, but has a home in Seaview. "The computer can send messages in Morse code as fast as we type them in, but no computer program has been devised that can take the place of a person in receiving code," Goodall says. "It is amazing, but we can actually encode up to three messages at a time. The competition is intense and tiring, but it is something we plan for all year long. Most of us (PCARC members) are retired technical people."

Goodall had the 7 p.m. to 11 p.m. shift Saturday and the 7 a.m. to 11 a.m. stint in the Morse code tent on Sunday. One of the antennas he helped purchase was imported from Germany and cost about $400. Another he anchored in the shallows of Willapa Bay and he was hopeful that as the tide came in the salinity of the bay would act as a conductor and help in receiving more messages. "I set up the antenna to receive the various signal strengths I've plotted from throughout the U.S. There's actually quite a bit of engineering put into this," he relates.

A beneficiary of the amateur radio and code competition is the emergency broadcasting system used locally and nationally. Kevin Kistler of Ocean Park and Rob Dennison of Long Beach are PCARC members and they were stationed in the Pacific County Mobile Command truck Saturday. Dennison says, "This is a 'Get on the Air station,' which means anyone can come in and use the radio. We can accommodate you in making or receiving calls." The mobile unit would become a command center in case of an actual emergency. "We receive bonus points for the club for the stations we contact," he adds.

The PCARC phone or voice unit was set up near the dock entrance at Port of Peninsula and operates entirely on battery power. "We can work off-grid during an emergency," member Robert Frost says. Gerald Presson, a young man from Oklahoma who was visiting his grandmother, Diane Presson of Long Beach, made a contact to someone in Colorado on his first attempt.

Member Bob Cline says, "Gerald just earned our club 20 points by being a guest and making a contact. If I had made that same contact our club would have earned only one point. One of the things we want to do is get the younger generation interested in amateur radio."

A repeater system with 30 antennas located on tops of hills throughout the county serves the local area. The system is used for emergencies and similar local networks are in place throughout the U.S. They operate on VHF, a frequency just above that of television signals. The high frequency system is between AM and FM radio broadcast signals and those signals, which the amateur club members use, can reach nearly all parts the U.S. and Canada.

For the record, PCARC contacted 1,700 stations during the 24-hour event, nearly double what they have recorded in the past. Dennison explains, "In amateur radio, antennas are everything when it comes to making contact. Dick Goodall, Dick Lemke, and Robert Frost did a magnificent job with the antenna systems."

Michael O'Meagher of Bay Center, also a PCARC member, concludes by saying, "This is a great weekend to get together and 'Ham it up' and share with others all over the U.S., Canada, and the world."