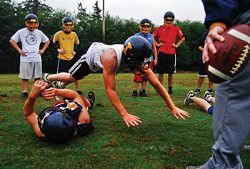 <I>DAMIAN?MULINIX/Chinook Observer</I><BR>Ilwaco football players perform "monkey rolls" - a warm-up drill that involves players leaping over another while those on the ground roll out of the way. 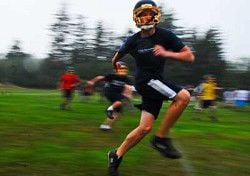 <I>DAMIAN?MULINIX/Chinook Observer</I><BR>Ilwaco football players perform "monkey rolls" - a warm-up drill that involves players leaping over another while those on the ground roll out of the way.

ILWACO - The Fishermen football team is long on positive attitude and short of varsity experience, making for what could be a rewarding, but challenging season for Coach Kevin McNulty and his 42 charges in 2009. Five starters return on both offense and defense, but at least one important cog in the Ilwaco football machine will be sidelined for the start of the season.

The Fishermen's leading rusher and passer last season was Rey Sanchez. After overcoming a knee injury he suffered a neck injury in a spring scrimmage against Naselle and may not be cleared to play until several games into the campaign. "We will go with Justin Short at quarterback. He was our leading receiver last season, but also did well at quarterback and he's a competitor," McNulty relates.

Until Sanchez is healthy the fullback position will be manned by either Tyler Starks or Taylor Odneal. Trevor Couch and Josh Berteaux will join the backfield as halfbacks. "Trevor has played well for us, but hasn't been able to stay healthy and Josh has really come on. Tyler and Taylor are blue collar kids who will give us their best shot," McNulty says.

Tight end will be in the hands of Kyle Breckenridge who had an exceptional spring, and speedster Brandon Malmstadt has the inside track as wide receiver. Nick Cox and Chris Schommer could also see time at receiver or running back. "We don't have a great deal of experience or depth at the skill positions right now," McNulty laments. "However, we are deep and talented in the line."

Joe Fjeldheim is penciled in at center with Ryan Edwards at quick tackle and Travis Malmstadt at quick guard, with Jesse Mortenson also in the mix for all three positions. Strong guard is up for grabs between Dylan Short and Bobby Richards and strong tackle is going to feature Sergio Nunez, Hayden Blake and Ricky Campos.

On the defensive side of the football McNulty has more questions than answers. The line should be solid and deep with Travis Malmstadt, Blake and Dylan Short at nose guard and Breckenridge, Campos, Fjeldheim, Nunez and Mortenson vying for playing time at defensive end in the Fishermen's 3-3 scheme.

Linebackers will be Starks and Couch, and Short will be pressed into duty as safety. The other linebacker jobs and the two cornerback positions drew a blank from McNulty's depth chart after the first week of practice. "Those positions are up for grabs," he says. "It is exciting to see the kids work hard to earn playing time, but it is frustrating to see veteran and talented kids not out for football that could play those key positions."

Offensively the Fishermen will operate out of a multitude of sets, but run "a few basic plays very well" McNulty stresses. The kicking game will rest on the legs of Justin Short, Christian Dekeyser and Mortenson. Short and Couch will be key return men and the rest of the backs will also get their chance at bringing back opponent's punts and kickoffs.

Ilwaco will open at Winlock, a team they lost to 28-27 in last season's opener, and then host three state-playoff caliber 2B teams in South Bend, Pe Ell and Naselle. The Fishermen kick off their Trico League campaign at home against perennial state power Kalama, who will play rival Castle Rock the next week and possibly overlook Ilwaco. McNulty believes Stevenson will challenge for the league title and LaCenter, White Salmon and the Fishermen should be bunched together and challenging for the league's elite for the third playoff berth.

"This summer we have more kids in the weight room than ever before and that's a big plus. Most games are won or lost on the line so that will also bode well for us," McNulty concludes. "Right now we have lots of things up in the air, especially in our defensive secondary."

Breaking down the Wisconsin Badgers 2021 recruiting class by position