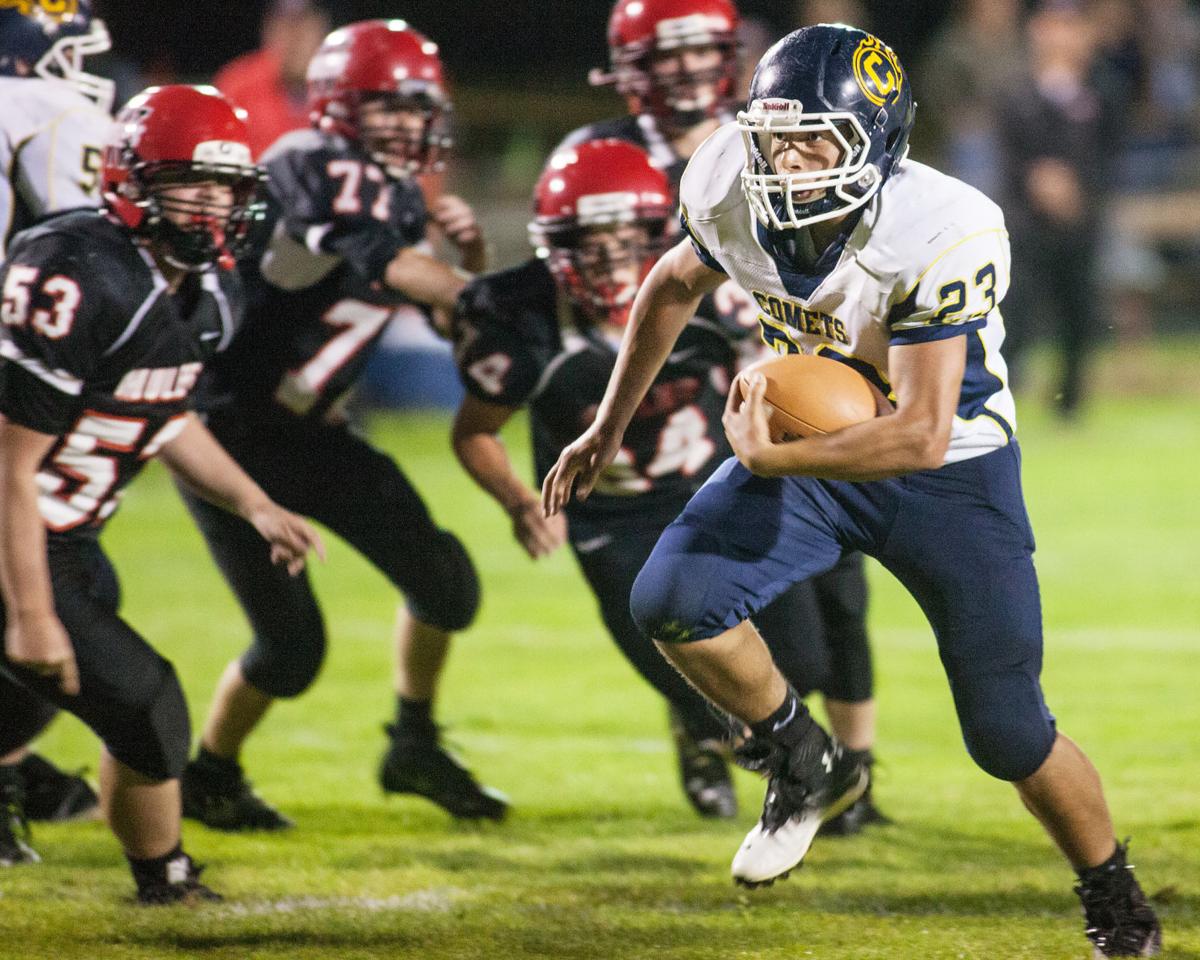 Naselle running back Erik Lund finds room to run against the Wahkiakum defense in their season opening game Friday night. 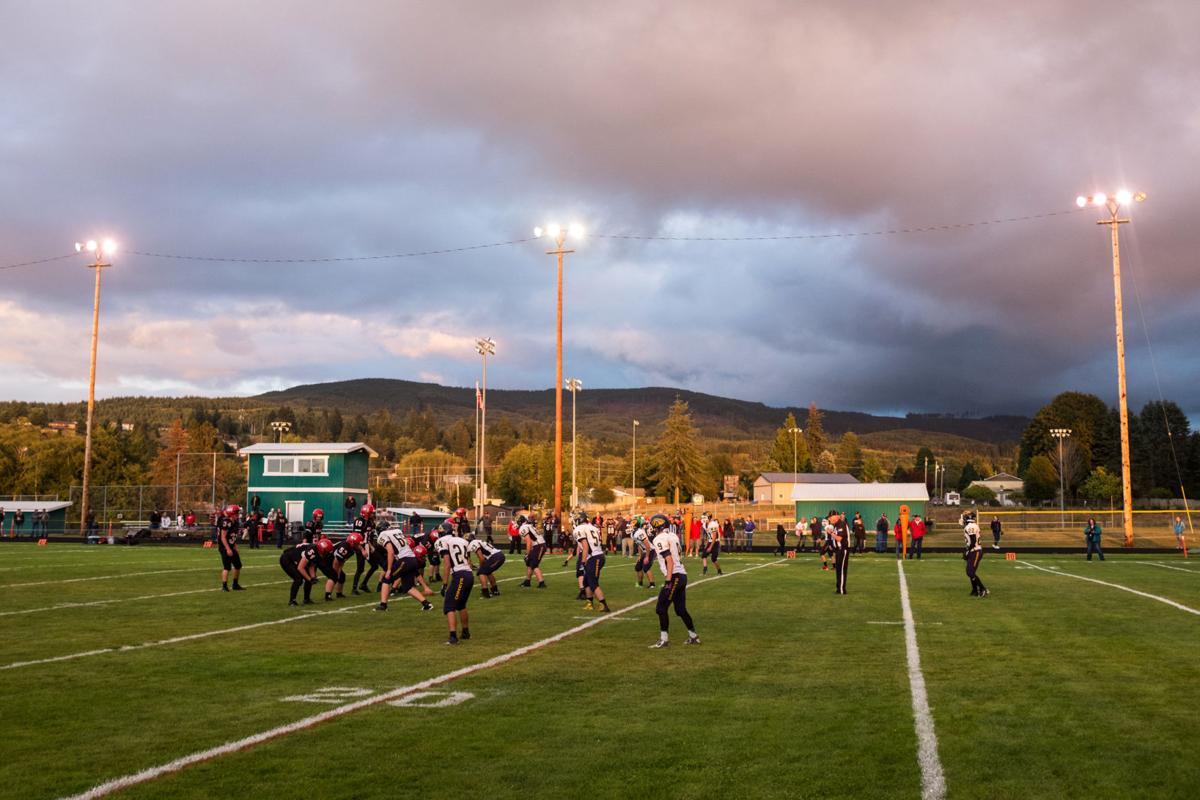 Dramatic skies made for a beautiful night in Cathlamet last Friday during the Naselle-Wahkiakum football game. 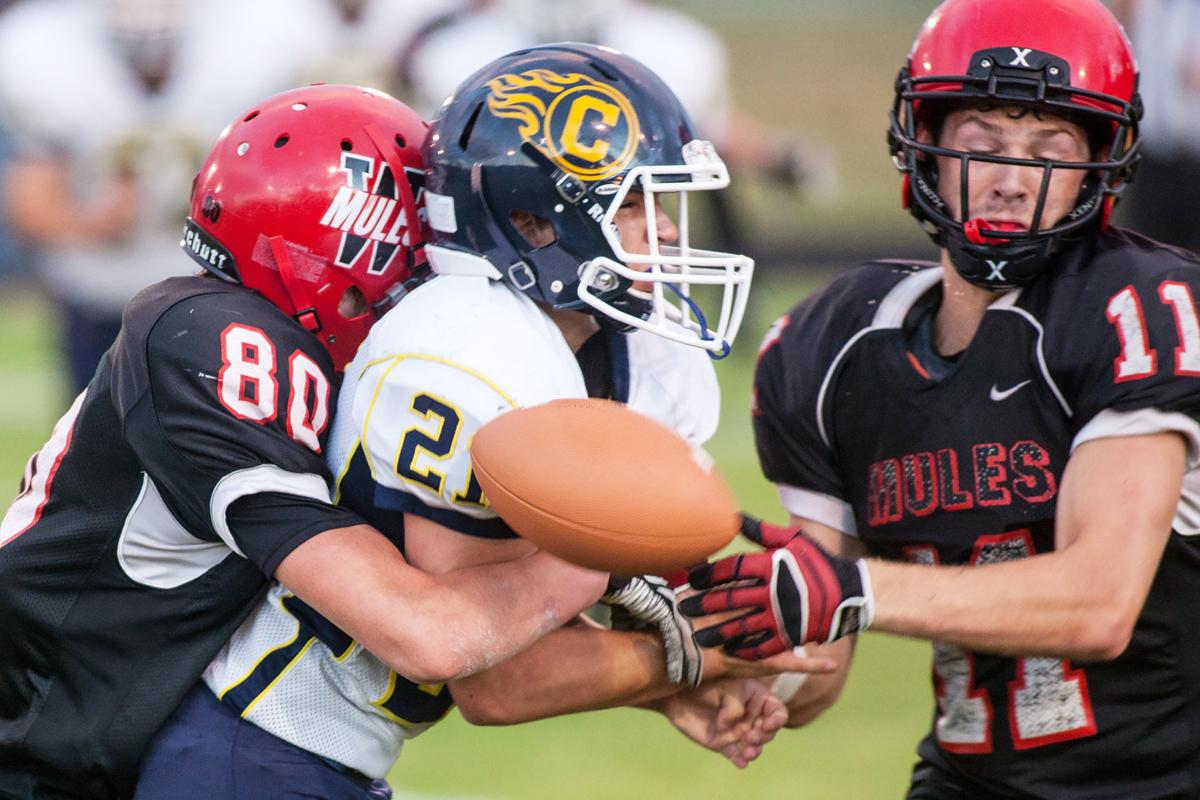 Naselle receiver D.J. Wirkkala has the ball stripped from his hands by Mules defenders in last Friday's KM Trophy game. 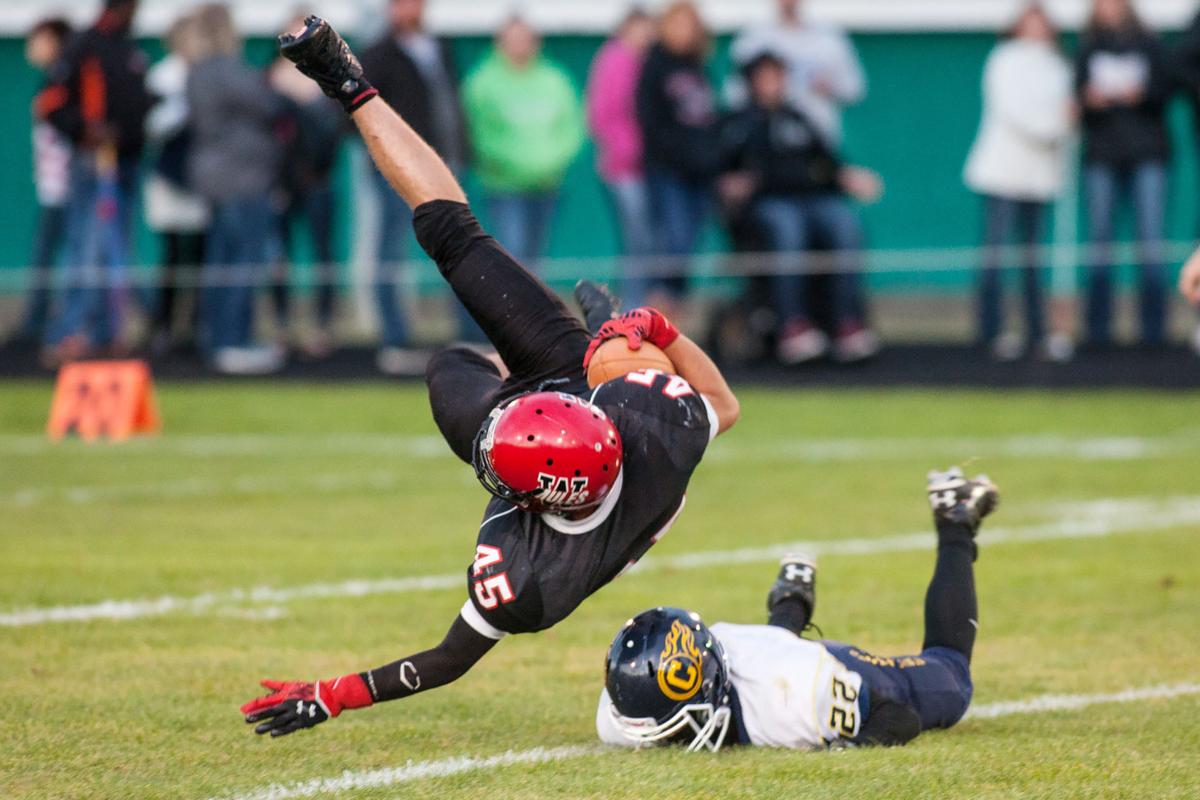 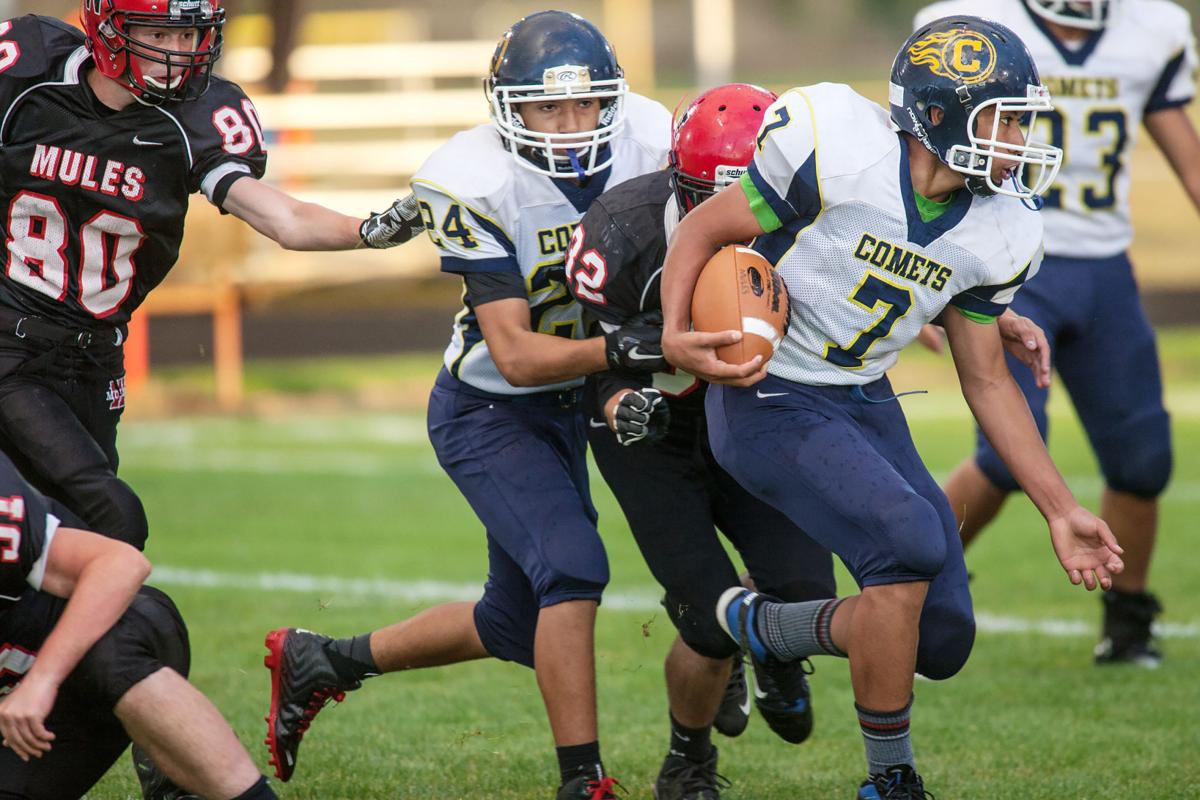 Naselle running back Erik Lund finds room to run against the Wahkiakum defense in their season opening game Friday night.

Dramatic skies made for a beautiful night in Cathlamet last Friday during the Naselle-Wahkiakum football game.

Naselle receiver D.J. Wirkkala has the ball stripped from his hands by Mules defenders in last Friday's KM Trophy game.

CATHLAMET — Led by a strong running game, Wahkiakum overpowered Naselle 48-6 on Friday, Sept. 2. Zach Brown had 93 yards on only six carries, leading the way early as the Mules took a quick 21-0 lead. James Anderson broke away for a 65-yard run near the end of the first half, finishing with 175 yards on eight carries.

Naselle’s powerful running back Jacob Scrabeck was out with a pulled hamstring. The Comets fed speedy running backs Donny Edwards and Oggie Lopez, but they had few holes to run through. In the second half, the Comets found some success with Erik Lund as a power runner.

Comets defenders had a hard time bringing down the 6’1” Brown, who had 84 rushing yards in the first quarter, plus a two-point conversion catch. His brother, quarterback Lucas Brown, found Ryan Quigley for a 19-yard scoring pass on fourth and five just 34 seconds into the second quarter, giving the Mules a commanding 21-0 lead.

Naselle gave handoffs and direct snaps to Edwards and Lopez early on, but their ground game sputtered. Cole Dorman, a sophomore making his first start at quarterback, had his first long completion on the Comets’ third drive. It came on a 25-yard pass to Parker Dalton down the sideline, taking the Comets into Mule territory. Naselle then quickly turned it over on downs.

After Wahkiakum went ahead 29-0, they recovered their own kickoff when Cody Terpsma pounced on the ball at Naselle’s 26-yard line. The recovery put Wahkiakum on the verge of scoring yet again, but Donny Edwards came up with an interception in the end zone near the end of the half.

The Comets finally scored on their second drive of the third quarter. Dorman, under heavy pressure, checked down to Erik Lund, who plowed through defenders after the catch for a 24-yard gain to the Mules’ 25. Edwards followed with a 14-yard run to the 11. On third and seven from the nine, Lund ran it in up the middle to make it 29-6. Anderson answered with his second long touchdown run of the day, a 45-yarder that put the Mules up 36-6 with 4:31 in the third.

After Lund’s contributions to their scoring drive, the Comets continued to feed him. “We found ourselves another running back,” said coach Jeff Eaton. Lund had three more carries of ten or more yards. He helped get the Comets to the Wahkiakum 15 late in the third quarter. On first down from the 15, Dorman threw a pass for Dalton in the end zone. Bryce Good played very tight coverage, jostling the ball from Dalton’s hands. Dalton nearly recovered for a spectacular catch, but could not quite hang on, and Naselle then turned it over on downs.

Dorman finished 11 for 27 for 107 passing yards. D.J. Wirkkala caught four passes for Naselle. Cornerback Brian Smith led the Comets with ten tackles; Coach Eaton credited him as the only player able to contain Wahkiakum’s runners on the outside and funnel them inside. For Wahkiakum Hank Ferguson was the workhorse with 105 yards on 15 carries to complement Anderson’s 175 yards and Brown’s 93.