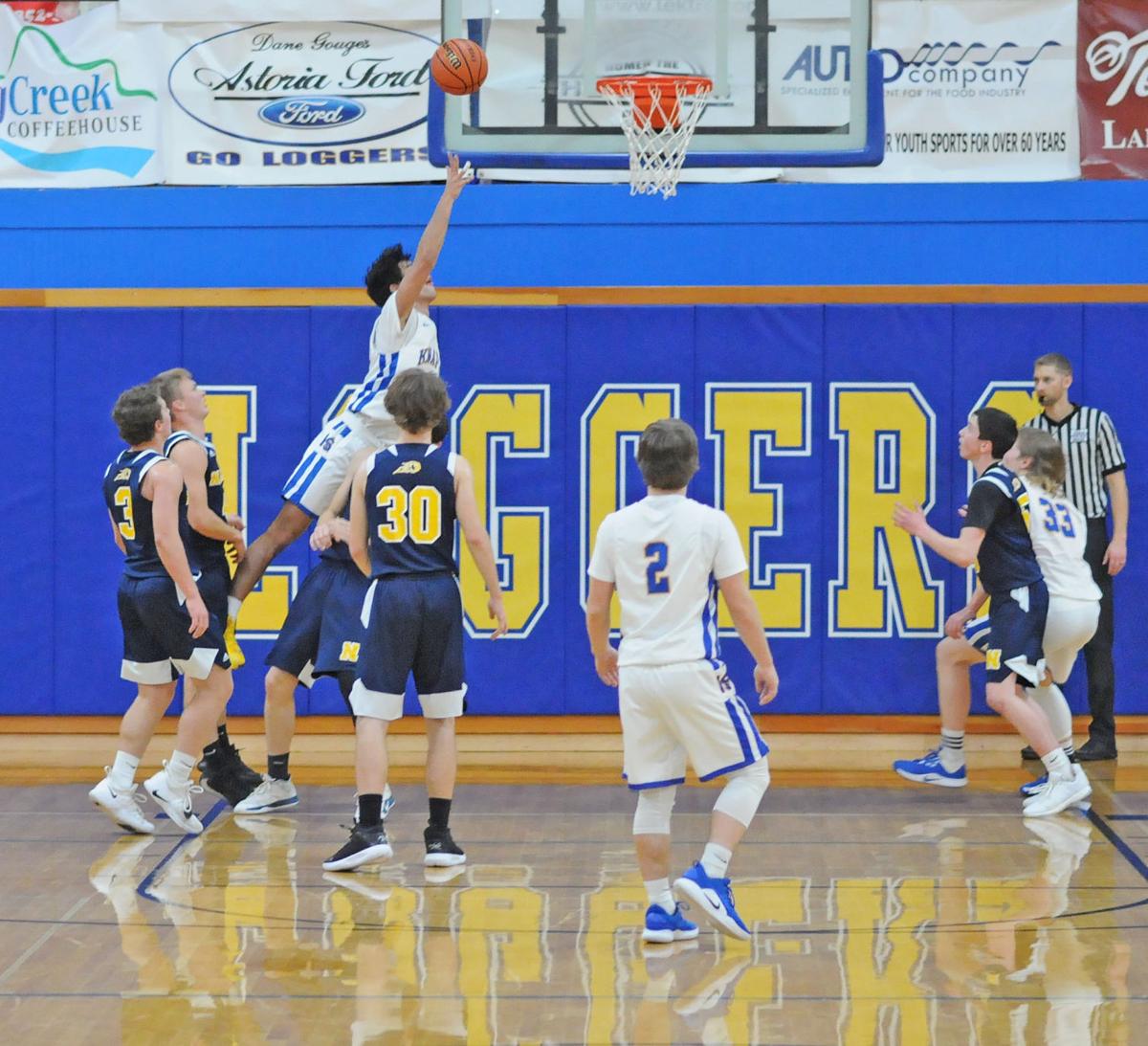 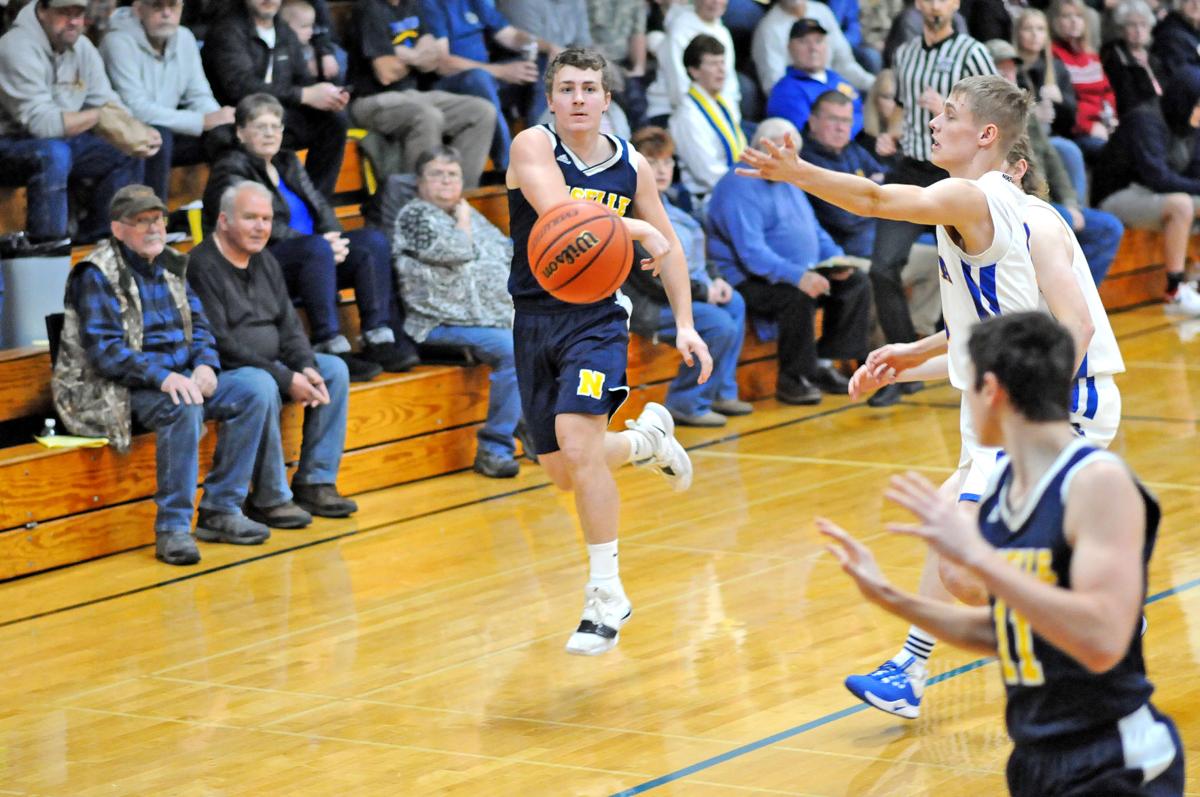 Jimmy Strange fires a pass ahead to Chase Haataia. 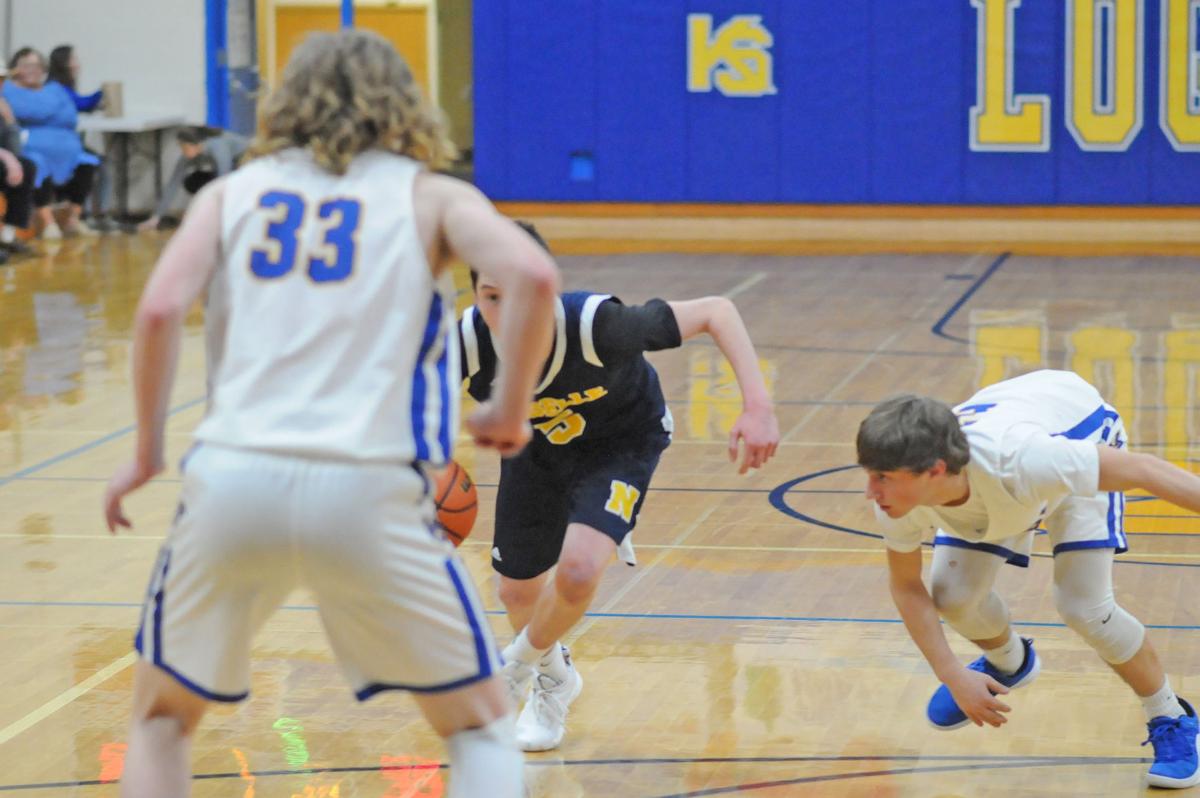 Kolby Glenn gets around his defender as Eli Takalo lurks protecting the rim. 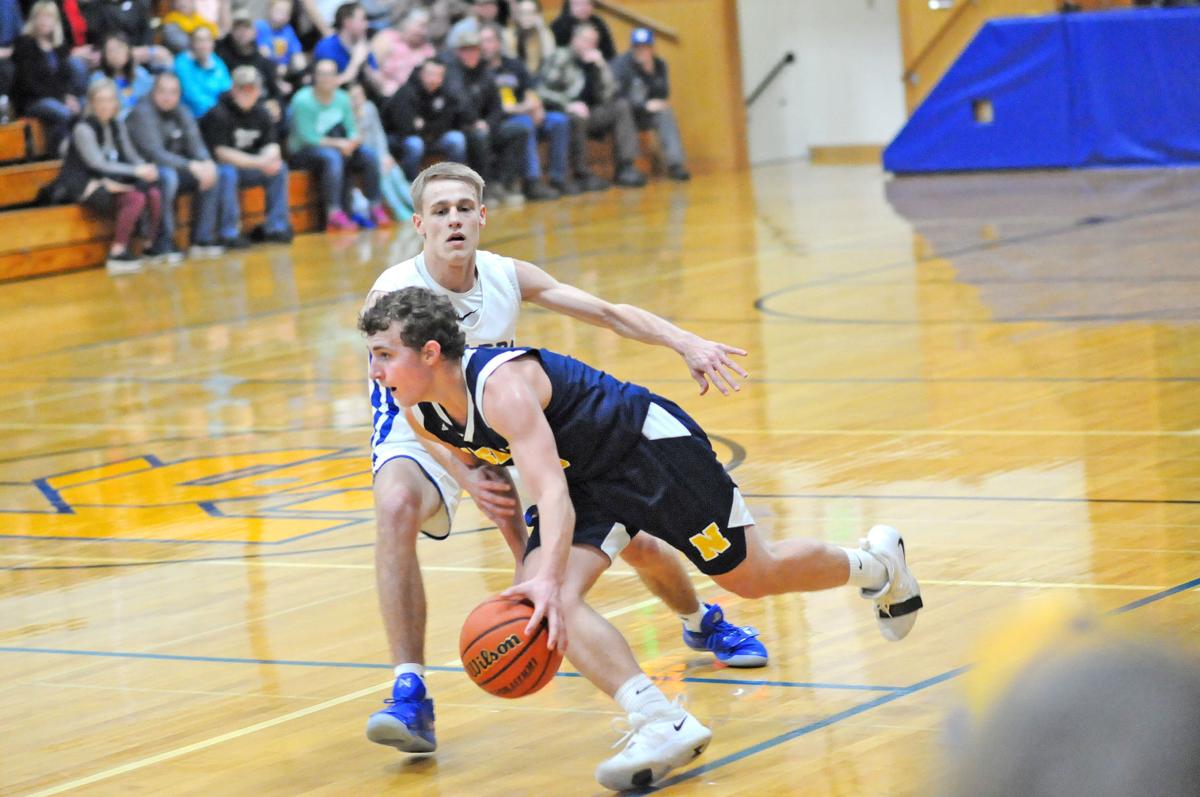 Jimmy Strange gets by his defender. 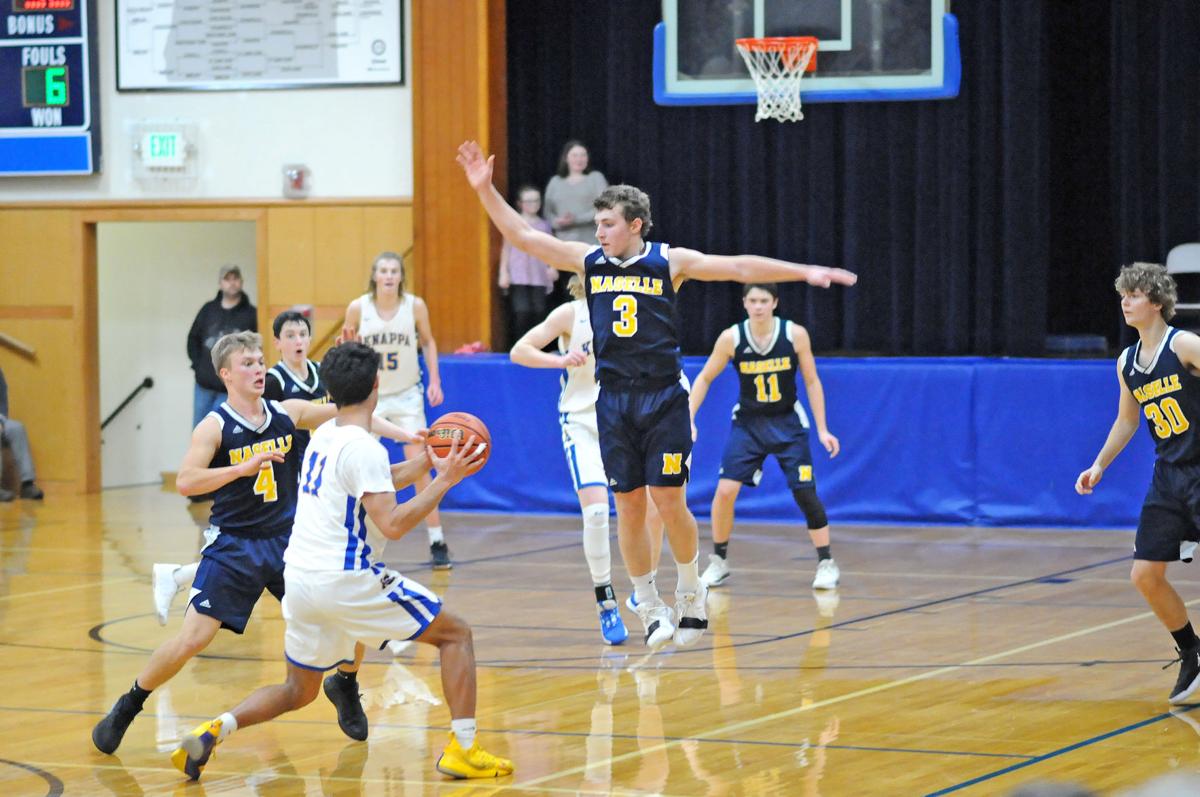 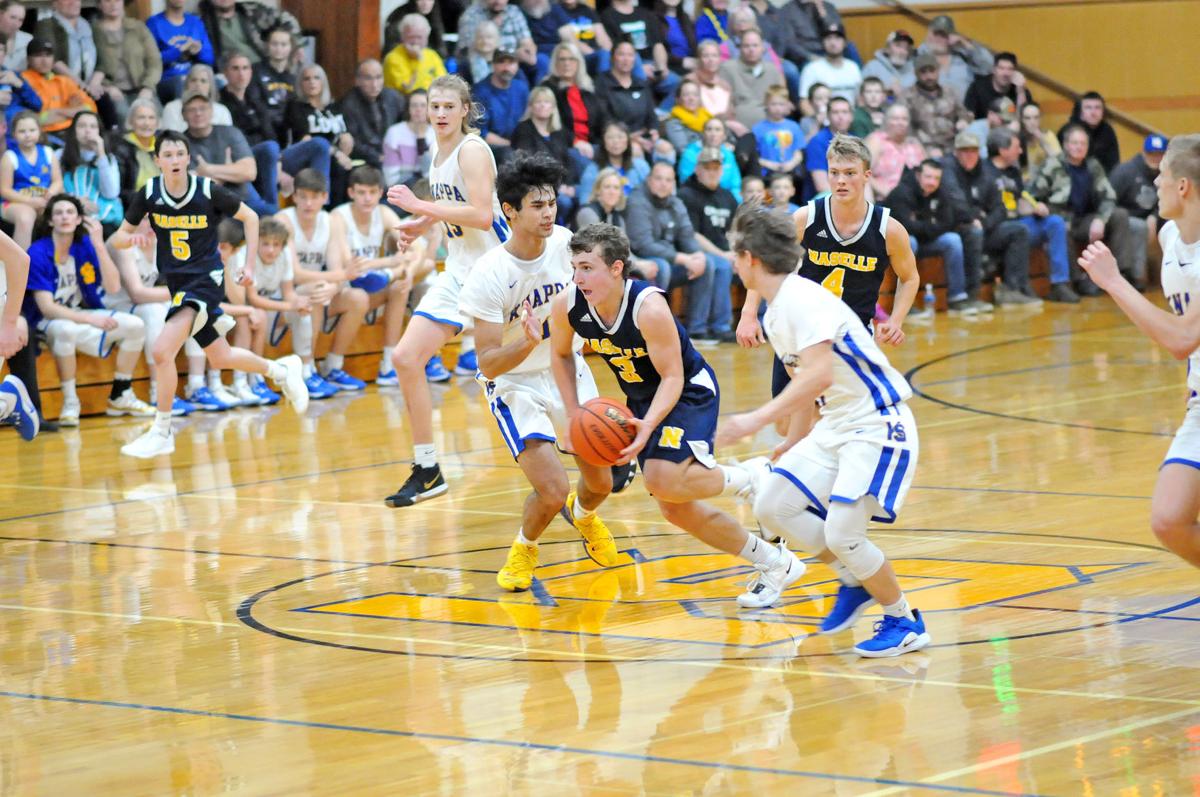 Jimmy Strange takes off on a fast-break.

Jimmy Strange fires a pass ahead to Chase Haataia.

Kolby Glenn gets around his defender as Eli Takalo lurks protecting the rim.

Jimmy Strange gets by his defender.

Jimmy Strange takes off on a fast-break.

KNAPPA — The Loggers improved to 11-0 with a 63-57 victory over Naselle Friday. The Comets led 33-27 at halftime, but Knappa took the lead in the fourth quarter and held on in the final minutes.

The Loggers’ big edge in size made it very difficult for the Comets to score in the paint. Despite the presence of 6’6” Mason Westerholm and high-flying 6’3” superstar Eli Takalo protecting the rim for Knappa, the Comets weren’t entirely deterred from attacking the basket. Instead, they relied on a drive-and-kick game to generate good looks from three-point range. Naselle hit seven first-half threes, three of them by Corey Gregory. Kolby Glenn hit three free throws after being fouled while shooting a three; counting that play, Naselle scored 24 of its 33 first-half points from beyond the arc.

Though there is no shot-clock in Oregon, the Comets weren’t being picky, instead taking the first shot they liked.

“We were looking to push the pace,” Glenn said. “Usually teams down here play slowly, but we wanted to play the way we normally play.”

Knappa cut the lead to 42-41 late in the third quarter, but Ethan Lindstrom stretched it back to four on a deep three at the buzzer on a kick-out from Jimmy Strange, who had eight assists on the night.

Strange continued creating for the Comets, going at the basket despite the formidable obstacles that awaited. He got the defense to collapse on him and found an open Chase Haataia in the middle of the floor for a jumper, boosting the lead back to four early in the fourth. After Knappa took the 52-50 lead on an Eli Takalo three-point play, Strange got a tough offensive rebound and got to the line while struggling with Logger defenders, then hit the two free throws to tie it back up with 3:17 left.

After another Knappa three-point play, Lindstrom found Strange near the basket, where he hit a tough shot to cut it to one.

Devin Hoover answered with a three, giving Knappa a 58-54 lead.

Strange still kept Naselle in it. He slithered around Westerholm’s help defense and banked in a shot to cut it to 58-56. Knappa put up a quick three and missed with 1:32 left; Strange attacked on the break, drawing a blocking foul and hitting one of two to cut it to 58-57 with 1:28 left.

On their next possession, Knappa was more determined to burn clock. They used 40 seconds, finally getting the Comets to foul. Hoover hit both free throws with 48 seconds remaining.

Strange then traveled while driving from the corner, and Kanai Phillip scored on an outlet on the ensuing in-bounds to finally clinch it for Knappa, giving them a five-point lead with 30 seconds remaining.

Sorry, there are no recent results for popular articles.

Sorry, there are no recent results for popular images.